NXT: Breakker falls short but breaks out at Halloween Havoc 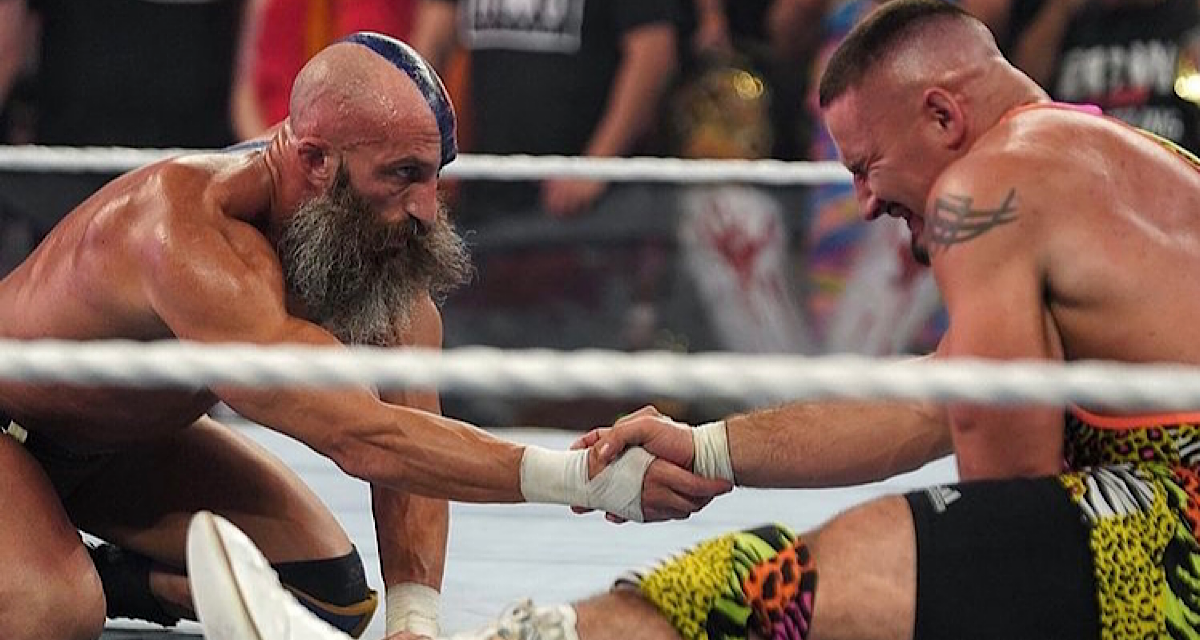 NXT’s 2021 Halloween Havoc special is in the books, and much like the brand’s aesthetic revamp, this year’s edition was significantly less broody. The overwhelmingly bright lights of NXT 2.0 shined on four solid championship matches, featuring a headline main event between NXT Champion Tommaso Ciampa and newcomer Bron Breakker. Although the rookie fell short of championship gold, his breakout performance highlighted a show of silly spooky segments and Chucky’s multiple appearances of corporate synergy!

Although a hypothetical stairway to hell insinuates a downward hike, the competitors are climbing upwards as per usual. So steel ladders are the focal point, surrounded by a mosh of brawling and the average high spot. Between six women, there’s a constant in-and-out structure to control the chaos, but in a different way, it’s still messy. After Shirai takes a major ladder bump to the outside, Toxic Attraction’s Gigi Dolin pulls the belts down, making her and Jacy Jayne the new NXT Women’s Tag Team Champions. Will Mandy Rose complete the fateful trifecta later tonight?

The North American Champion Carmelo Hayes and Trick Williams, who are indeed “‘bout it bout it,” pull up to Dexter Lumis and Johnny Gargano’s haunted house. Hayes and Williams quip and banter like it’s Scary Movie 6 before “to be continued” flashes on screen.

Grayson Waller is doing LA Knight’s hosting duties despite losing the opportunity last week, but Gacy shortly interrupts with the usual spiel. During the match, Harland is split-screened walking into the building, which inevitably leads to ringside. Gacy hits his handspring lariat for three before meeting with Harland, who’s dressed like an uglier version of Michael Myers. It’s certainly a… unique direction for the supposed next big thing.

A vignette of Kay Lee Ray shows her raging inside a rage room, which entails breaking glass and microwaves with a sledgehammer. She’s really angry now.

Waller is greeting guests at his backstage Halloween party, which includes the likes of Ikemen Jiro, Kushida, Tony D’Angelo, and Cameron Grimes. On second thought, it looks like Waller has Knight’s duties in order.

Malcolm Bivens’ big mouth issues the challenge, and the even bigger Odyssey Jones accepts. “Brother… your big ass is not 205 pounds,” says Bivens respectfully. But Strong persists anyhow, chopping down the opposition. Every single movement from Strong is smooth, crisp, and perfect — he’s undisputedly still one of the best going. Jones gains the upper hand until Diamond Mine interferes, and a jumping knee from Strong earns him the victory.

Imperium is interviewed backstage, with subtitles, about their NXT Tag Team Championship match. They’re basically asked how WALTER feels about their opportunity, which shouldn’t tease dissension but somehow does.

Back at the Halloween Party, more NXT characters such as Von Wagner, Kyle O’Reilly, and Duke Hudson do the funnies. Meanwhile, Xyon Quinn has had enough of Elvis Presley, played by the equally illustrious Robert Stone, slamming him through a table.

Gonzalez appears on a motorcycle before spinning the wheel — and making the deal too. She lands on Chucky’s Choice, which leads to Chucky himself picking a Trick or Street Fight on screen. Although Rose takes control with a kendo stick, Gonzalez turns the tide with some hardware during picture-in-picture. There’s a unique spot where Rose uses the kendo stick, trapping Gonzalez to an announce chair. But it’s offset by Gonzalez’s fire extinguisher spot where she, for some reason, dons a cheap Jason Voorhees mask. Eventually, Gonzalez spears Rose through a corner table for two, and a cloaked figure strikes the champion with a shovel thereafter. Rose capitalizes and officially wins the NXT Women’s Championship as the figure reveals herself to be Dakota Kai.

Carmelo Hayes and Trick Williams are chased around by Dexter Lumis’ spooky house guests. “Did somebody say Andre Chase?” says the man himself, who is eventually kidnapped by zombies. Hayes and Williams find the belt but run screaming from Lumis and Johnny Gargano. It was ridiculous, but the production was amazing. WWE does make movies after all.

The “NXT 2.0 fan of the night” Alex spins the wheel, ultimately choosing the big stipulation. MSK’s Nash Carter and Wes Lee have good showings, diving onto Imperium and the ringside mob before picture-in-picture. Afterwards, Lee floats through his comeback but is stopped by Imperium’s incredibly strong Fabian Aichner — who struggles but eventually squats up both Carter and Lee. The competitors crash — Carter in particular burns — through the outside mass before the action breaks loose. A Canadian Destroyer and signature assisted backflip from MSK garners just a two, but MSK regroups with the Imperium Bomb for three. This match proves it; NXT’s tag team division still has it!

The champion’s God of War attire is opposed by Breakker’s genetic freak physique, which comes with amazing agility and intensity for a newcomer. Ciampa takes control after picture-in-picture, but Breakker makes the short-lived comeback; attempting a second-rope dive, Breakker legitimately slips off. Bygones are bygones, and the veteran Ciampa connects with Widow’s Bell for two. They trade strikes and maneuvers before heading ringside, where Ciampa DDTs Breakker onto the previously exposed concrete, busting the latter open. Miraculously, Breakker kicks out of Ciampa’s Fairy Tale Ending. But a series of knee strikes and a finishing Fairy Tale Ending gives Ciampa the well-deserved victory.

Gimmicks and goofiness come with the terms of WWE Halloween specials, and it’s always hit or miss. Trick Williams and Carmelo Hayes’ haunted house mini-movie? Hit (because Hayes “never misses”). Giving the women’s division to Toxic Attraction? Miss. But at any rate, the matches delivered, and the main event was very impressive. Bron Breakker with experience will be unstoppable.