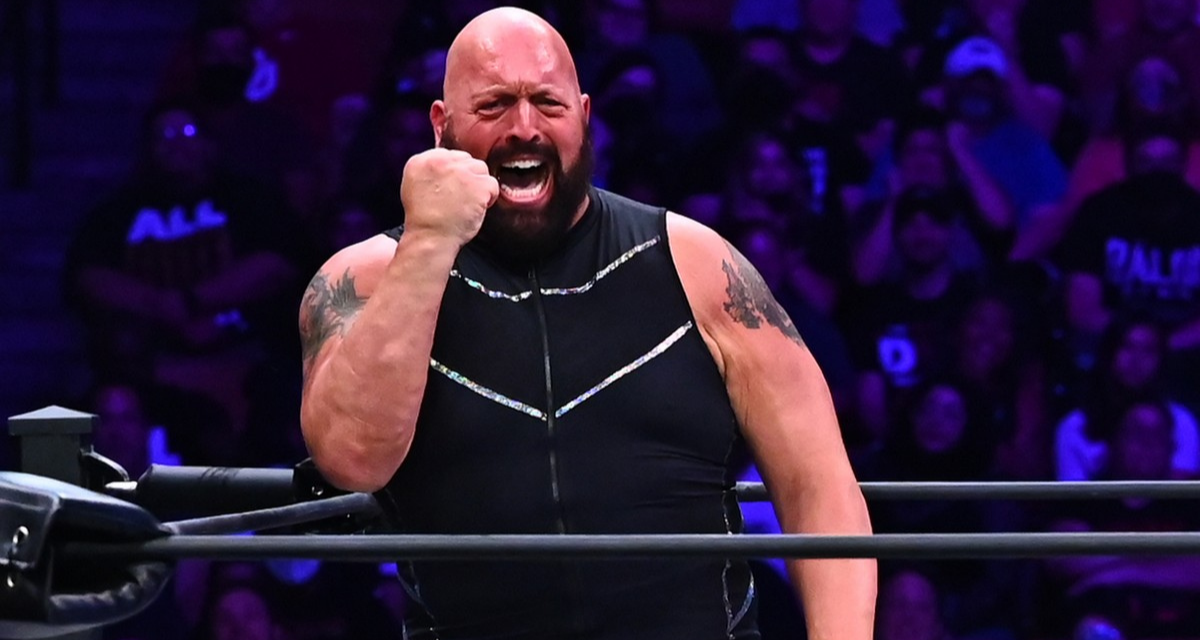 Hey yo, AEW faithful, and welcome to our recap of Dark Elevation. This week’s episode was actually a bit of a weak episode. A lot of that had to do with the sense that there is no rhyme nor reason as to which women are thrown together to compete – indeed, it felt like this week’s show featured yet another random women’s tag match.

Since Ivelisse was fired from the company, Diamanté has had little to no direction – which is a shame, because she generally has very good performances. This week, she was stuck tagging with newcomer Xtina Kay. While I understand putting Kay with a veteran like Diamanté will help Kay’s development, without a broader story in play, Diamanté just feels wasted – and wasting one of the best workers in the division is a mis-step. Their opponents were yet another randomly-paired duo of Leyla Hirsch and Ryo Mizunami. It really would benefit Dark and Dark Elevation if they could find some consistency in how they book the women on these shows. For example, in a tag team match, make sure that at least one side is a pairing that regularly team together. Without some regular teams, is there a point to having the division in the first place?

Consider how they book the men’s tag teams on these shows (like FTR, who were featured this week). Generally, they put an established team against some rookies or local tryouts. The established team gets the win, thereby improving their record. While the other team get some TV experience, and the AEW brass can get to see what they can do in the ring. That same formula should be applied to the women.

The other notable event coming out of this show was QT Marshall’s eye injury. I’m not sure what happened (I rewound and rewatched the match to no avail) but QT’s left eye looked horrible. Seconds into the match QT’s eye was already swelling shut and by the end of the match it was a horrific looking purple balloon I don’t know how he continued but for some reason they didn’t cut the match short. Find this one online, and if you can figure out what happened, let me know.

Even though the pairings were random, this match was good overall. There was some strong work from Diamanté and Leyla, and some nice spots by the newcomer Kay – keep your eye on her. The match ended with a great Spear by Mizunami followed by a Running Knee by Hirsch on the rookie Kay for the three count. 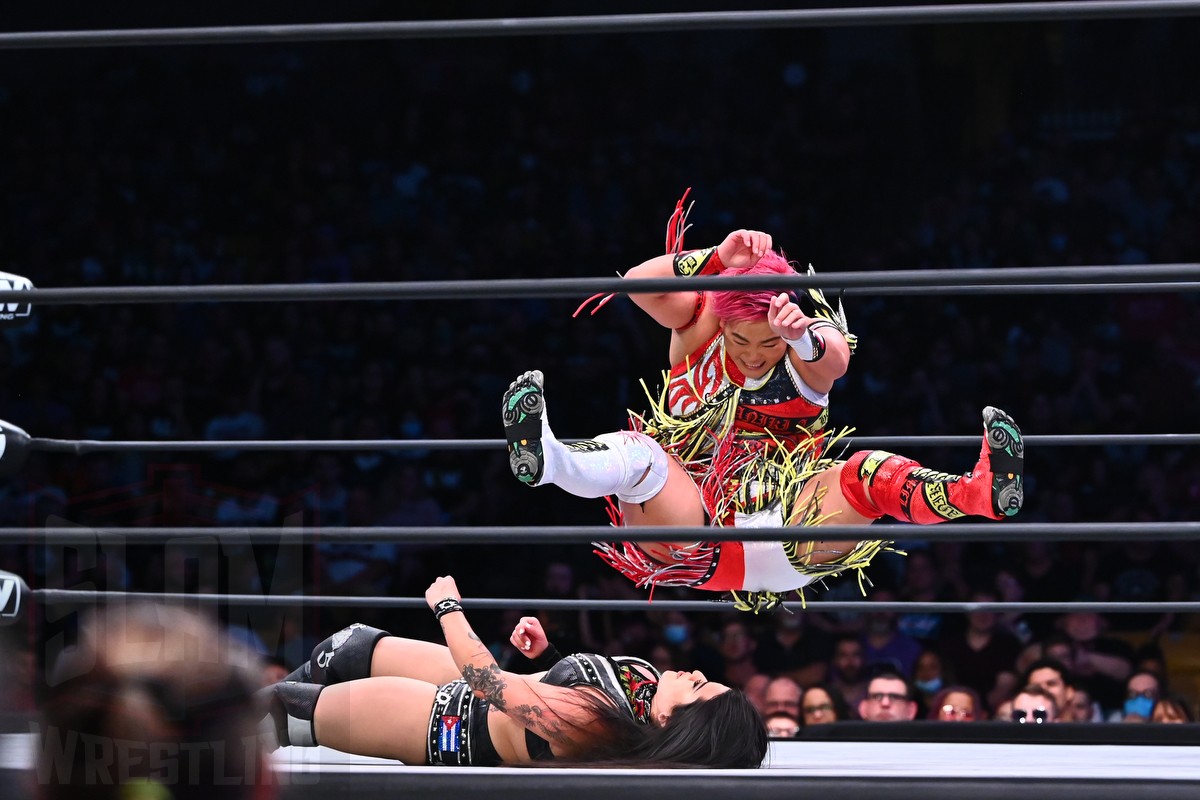 Ryo Mizunami drops onto Diamante at the Addition Arena in Orlando, FL on October 23, 2021. Photo by Joe Hrycych, www.hrycychphotography.com

FTR is one of the best teams when it comes to letting the rookies get their spots in and making them look good. This helps build the credibility of their opponents, plus it makes the matches with an obvious outcome more fun to watch. Reed looked very good in the match and the rookie Liona looked like a monster threat. Mike Reed took the Big Rig for the loss. This was very fun, and is my pick for match of the night. 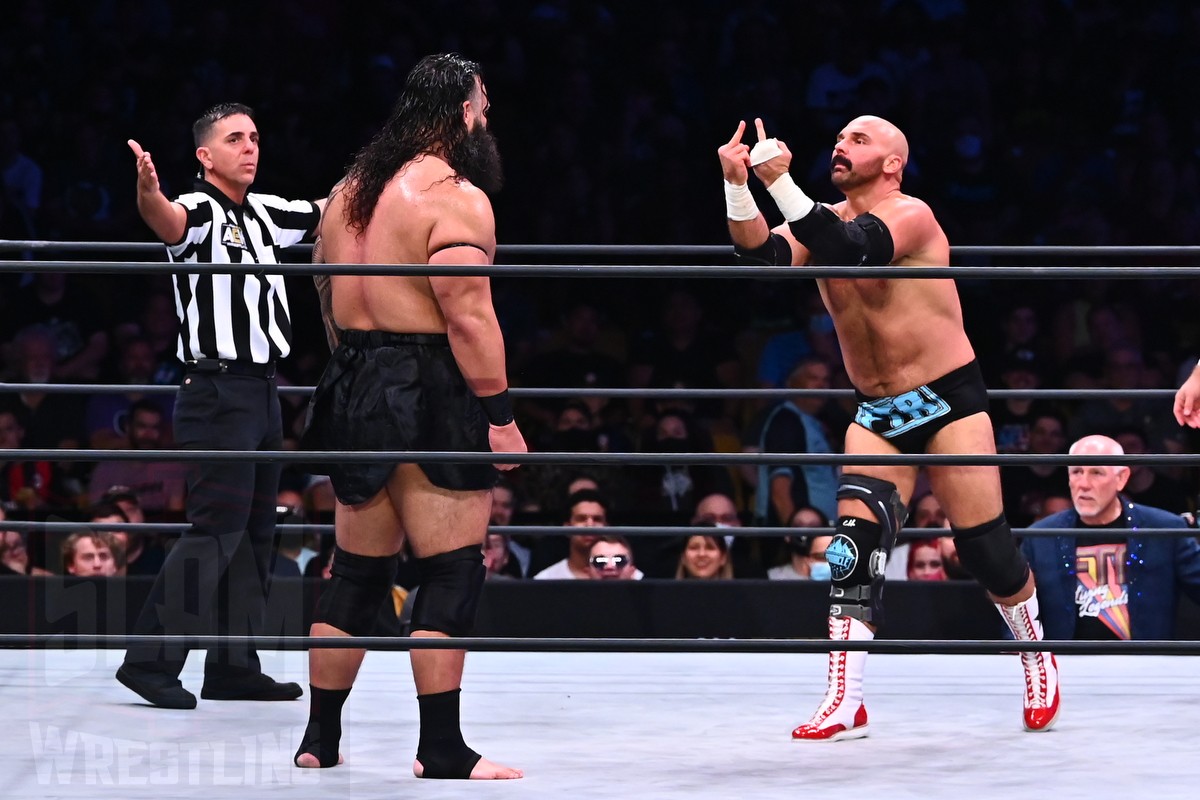 FTR’s Dax Harwood shows Toa Ianua what he thinks of him at the Addition Arena in Orlando, FL on October 23, 2021. Photo by Joe Hrycych, www.hrycychphotography.com 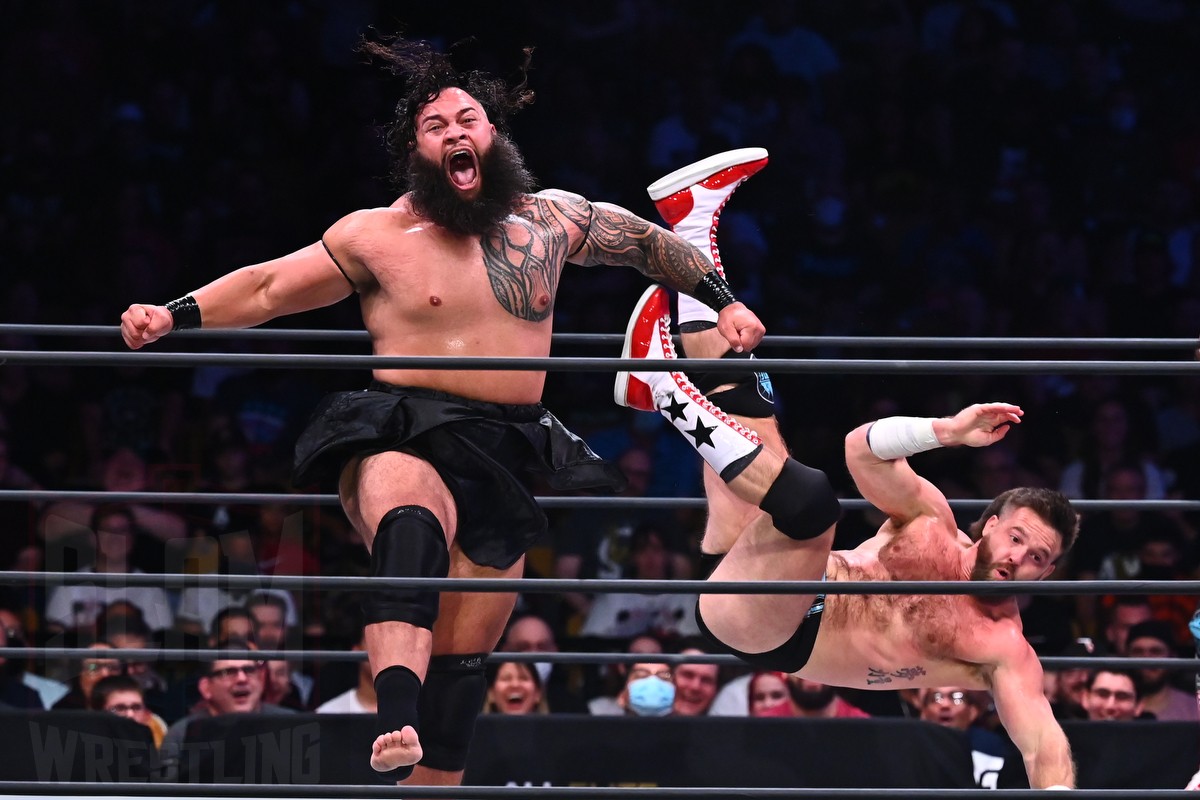 This match was fine. Tehaka cuts an imposing figure, and with some more experience, could become a contender. Tonight would not be the start of Tehaka’s run, though, as Sukura somehow always seems to out power larger competitors. Sukura hit a Spear with Tehaka in the turnbuckles and then a Vader Bomb style senton splash for the win.

Ten came out to a huge ovation with -1 riding his shoulders.  QT’s eye got injured, and his eye was swollen completely closed but the match wasn’t stopped. Ten repeatedly punched and kicked QT in the face, which made sense story-wise, but I couldn’t help feel bad for the heel as QT’s eye was obviously hurting him. 10 did look good in the match and QT did his best to fight back but ultimately got caught in 10’s Full Nelson for the tap out.  I hope there is nothing too seriously wrong with QT’s eye – it looked terrible by the end of the match. 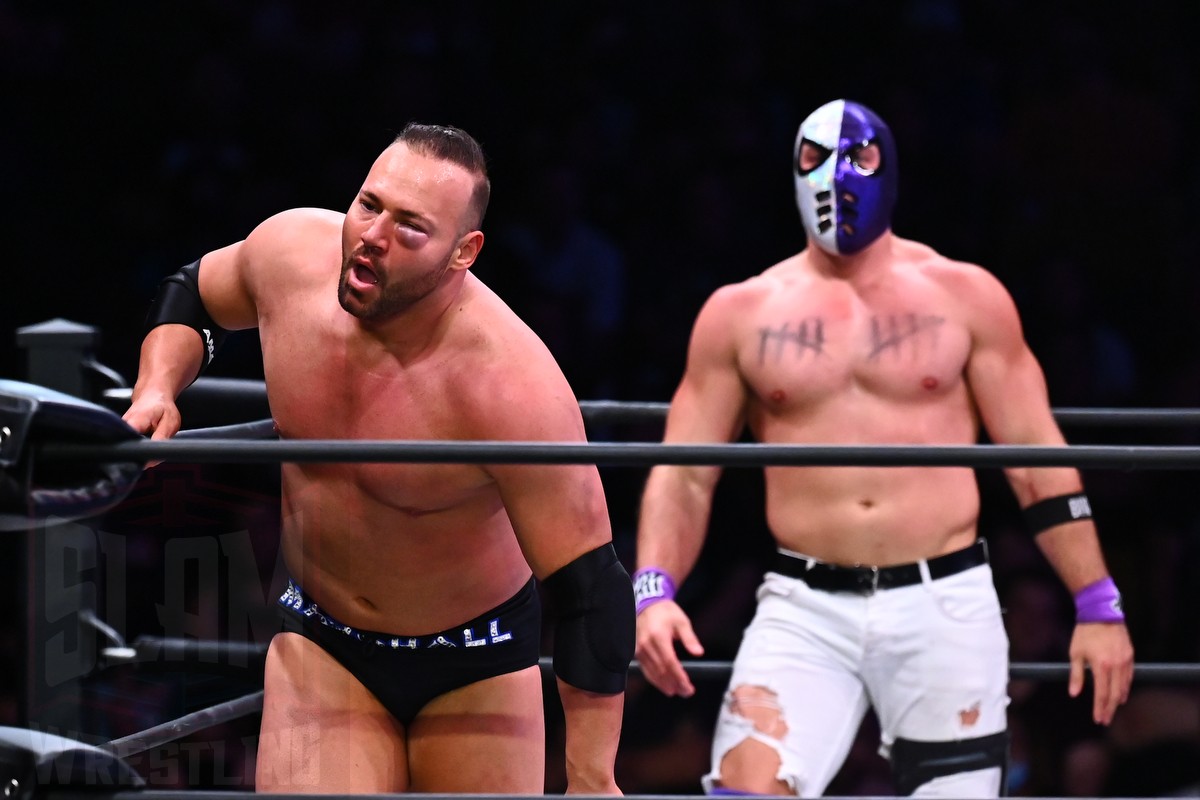 QT Marshall, with a new shiner courtesy Preston (10) Vance, at the Addition Arena in Orlando, FL on October 23, 2021. Photo by Joe Hrycych, www.hrycychphotography.com

Paul Wight destroyed the three guys in the main event. Wight hit some heavy offence, including some soul-crushing chops on his opponents. Choke Slams and a KO Punch would finish the match. 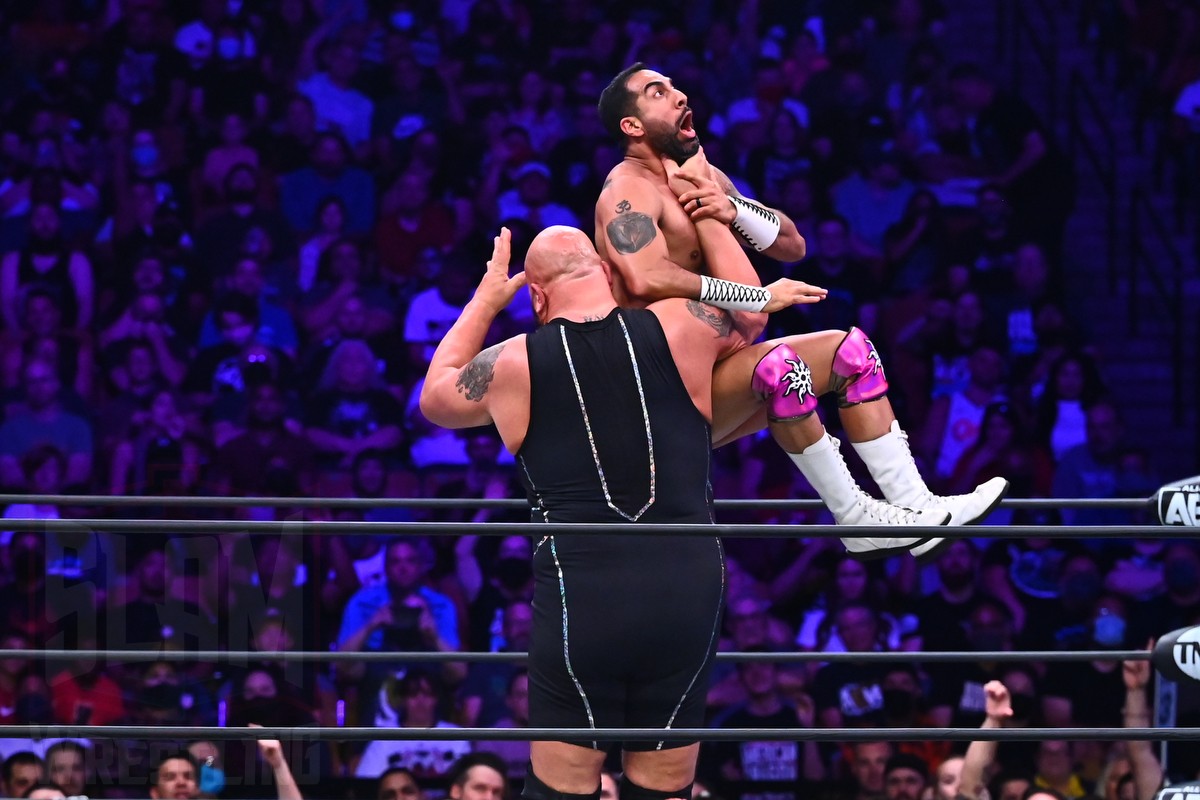