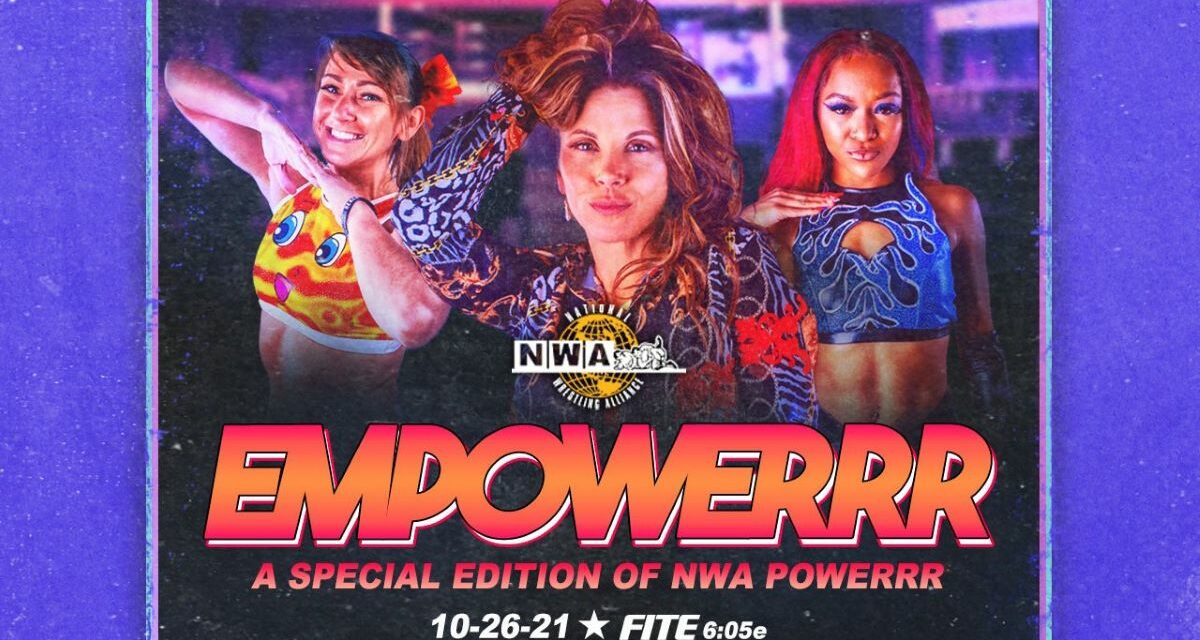 This episode from the National Wrestling Alliance is not just POWERRR-ed…it’s EMPOWERRR-ed.  So, fans, you won’t need to step Into the Fire.  But you best believe that tonight, it’s Ladies First at The Chase in St. Louis, MO.

But here comes Cyon with a cold open to the show.  He’s still speaking in riddles, and says that Tyrus and Austin Idol are asking the wrong questions, and they should be asking what will take place.  This isn’t where the story ends, but where it begins, because come December 4Th at Hard Times 2, he is coming for Tyrus for the NWA Television championship.

Now we head to commentary with Joe Galli, Velvet Sky and special guest commentator Da Pope have the call, and the women are going to take center stage, starting with your First Match for the… 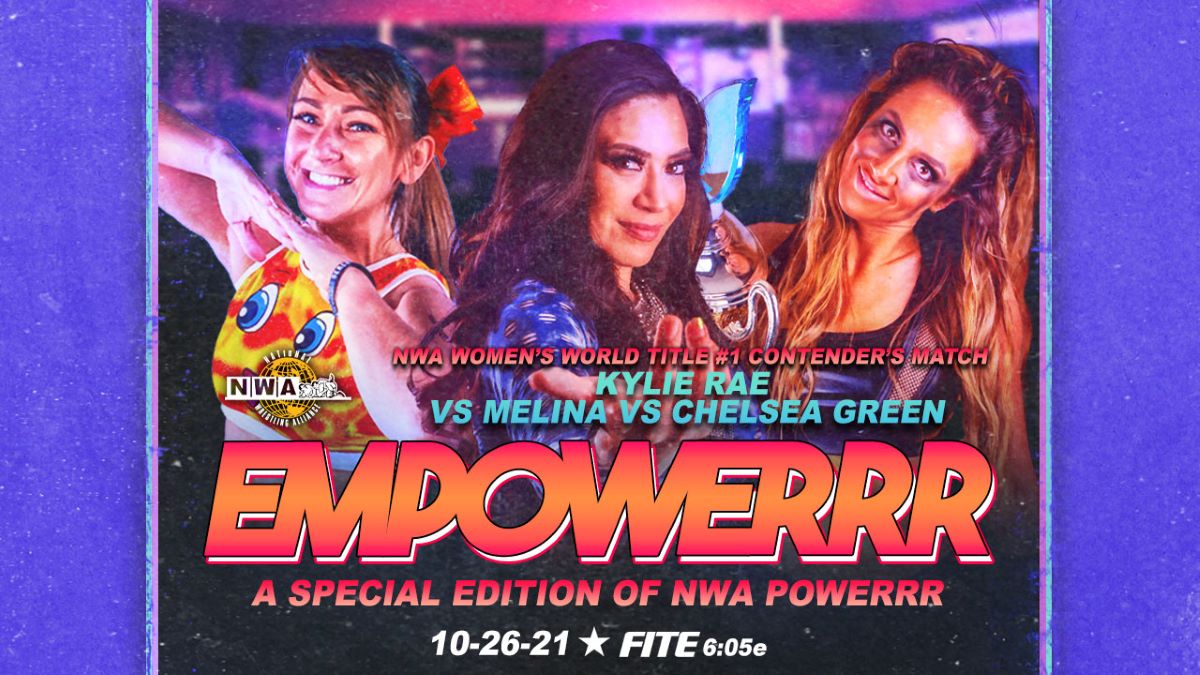 Number One Contendership for the NWA Women’s Title:  Kylie Rae vs. Melina vs. “The Hot Mess” Chelsea Green

There’s a lot of talent and potential vying to be number one to face Kamille, and Green is first sent out, and now Rae and Melina spar for a bit before Melina catches Rae in the ropes for a unique DDT to pin for a two count.  However, you should never turn your back on crazy, as Green pulls out Melina and delivers head butts.  She gets back in, but Rae delivers a superkick to send Green out again, and then follows with a tope suicida, but gets hit by Green’s arm cast.  Fast than you can say “Cowboy” Bob Orton, Green grabs Melina and Rae and cracks both their noggins, then hits her own tope suicida.  Both Rae and Melina are dazed, and Green pins Rae for a two count, then tries Melina for another two count.  Green goes for a basement dropkick to Melina, but then eats a Kylie superkick.  Rae then a is caught in a facebuster by Melina to a double California Nightmare submission, but both women bridge up and drop Melina in a double neckbreaker.  Rae covers but Green breaks up the count.  Green sets up Rae for the Unprettier, but Melina rolls her up to a pin for the win.

Your Winner and your Number One Contender for the Women’s Title:  Melina

Melina will be facing Kamille at Hard Times 2, and the title picture for the Pay-Per-View is becoming clearer with each passing day.

At The Podium is May Valentine with the current Women’s champ, Kamille.  Valentine asks why she decided to give Tootie Lynn a match, And Kamille nonchalantly says she needs to keep her muscles limber, so there’s nothing wrong with a little exhibition. But when Valentine asks about Latimer and Aldis’s feud, the champ says that ain’t her problem, and she is focused on the match in the ring.  So let’s go to… 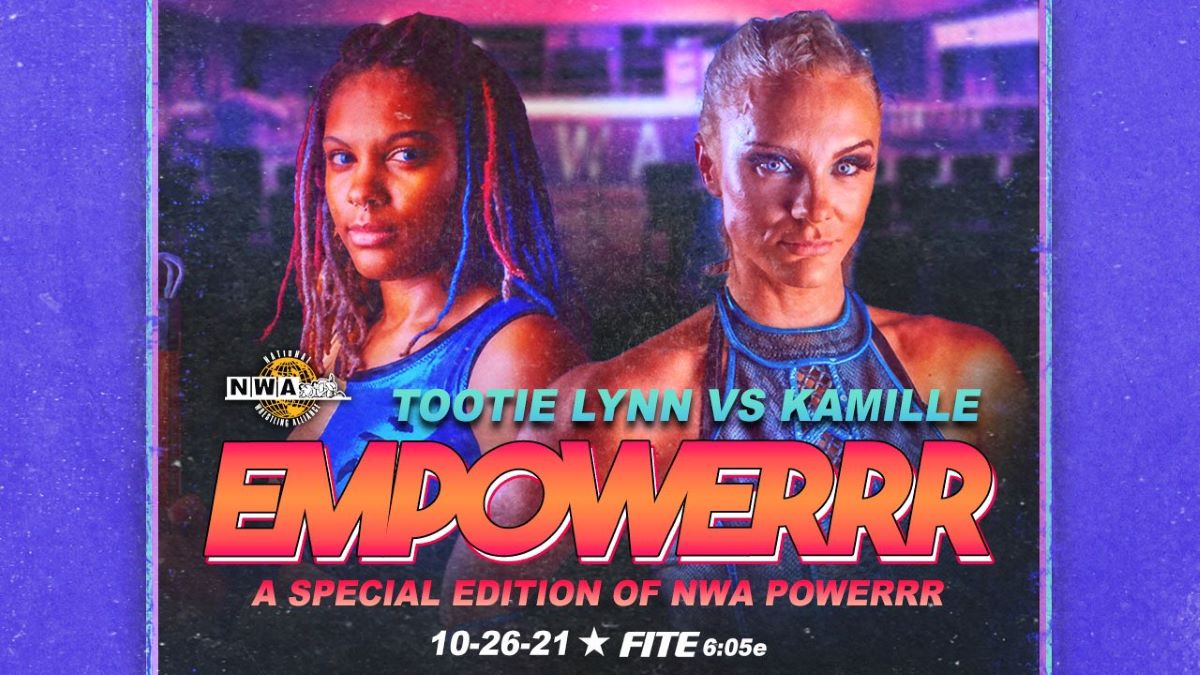 During the ring introductions by Kyle Davis, he announced if Lynn wins tonight, she will have a future chance at “The Burke.”  Kamille is incredulous, and The Little Blue Dragon take advantage with a quick roll up but Kamille escapes at the two count, and goes to Kyle Davis asking what the hell that was about.

Meanwhile back at the ranch…err, ring, the ref begins the count out, and the champ comes back with deadly focus.  Kamille enters the ring, and nails a backbreaker, and then ties up Lynn in the ropes with a fishhook and a clubbing blow to her chest, and then to a suplex for a two count.  Kamille starts wrenching Lynn’s neck, and the hometown crowd cheers on the Dragon as she gets drilled with a back elbow to send her back down.  Kamille sends Lynn in the corner and follows with a running clothesline splash, but Lynn comes back with high knees and a crucifix pin for a close two count.  Kamille is done with this, and one spear is all it takes for the pin and the win

Yeah, The Brickhouse is beside herself, and god help the next woman that crosses her path. 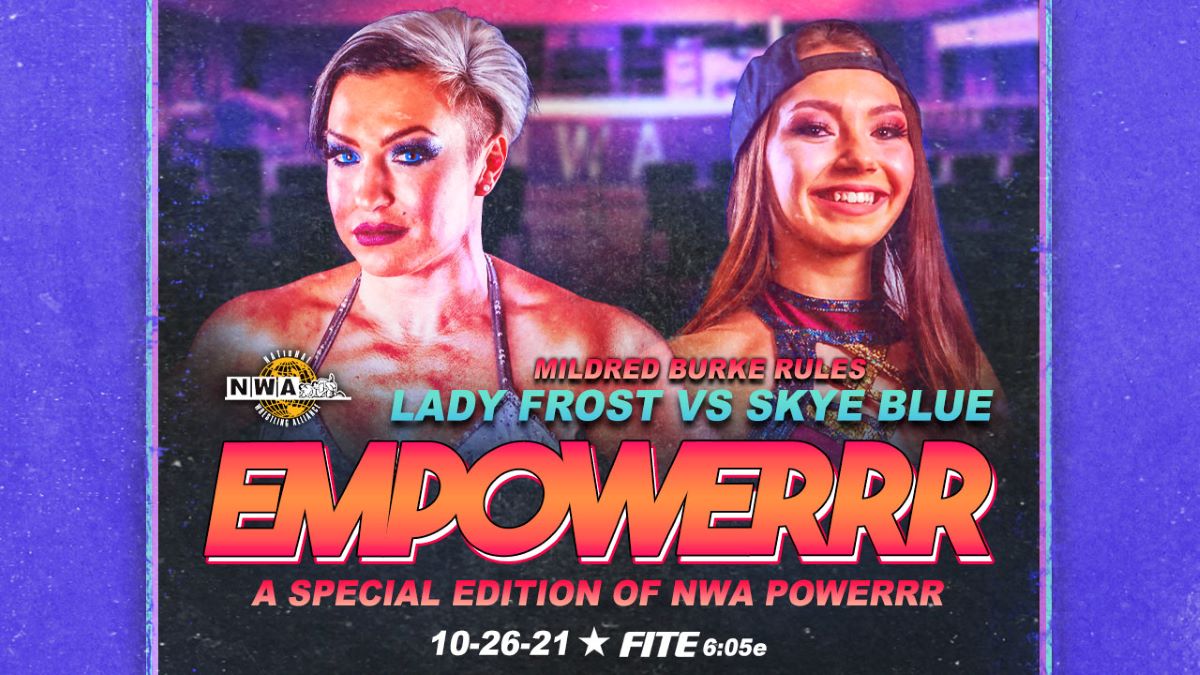 As Kyle Davis explains, the match will be contested under Burke Rules which means: no closed fists, no sending opponents over the top rope, and you cannot use the top rope for any offense.  So naturally, frost goes to break those rules, but the ref is quick to admonish her at every turn.  The match is even between Frost and Blue, and Frost goes outside to cool off (eh!  See what I did there?  What, nothing?!), and comes back in the ring and goes to a series of wristlock, but Frost uses the ropes to escape the hold, but eats a superkick by Blue for a two count.  Blue rushes to Frost in the corner, and gets a back elbow for her trouble.  Frost turns it to a dropkick and a camel clutch submission, but Blue fights out and reaches the ropes to break the hold.  Frost tries to throw blue over the top rope, but…silly Frosty.  “Burke Rules,” are in place, kids.

Velvet Sky notes that she is getting “frost-trated” (Author’s Dad Joke Rant:  That joke meets with a cool reception.  Ahem!), and whips Blue to the corner with a kick to the face that knocks her loopy.  Frost goes up top, but again ref says “Nope.”  Blue capitalizes with knee strikes and a dropkick for a two count.  Frost goes back up top, rules be damned, and Blue manages to knock Frost down, but Blue gets rolled up in a pin with handful of tights for the three count.

Your Winner via Pinfall:  Lady Frost

Back at The Podium, May Valentine is with Kratos sans Stevens.  Valentine states the obvious and asks what’s going on, and Kratos can’t deal with Stevens’s insecurities at the moment. He gives props to the ladies in the ring to cheers from the fans, and says the boys had to step up their game after the EMPOWERRR PPV.  When asked who he favors in the women’s tag match, Kratos goes with The Hex. Then, The End comes out, and Parrow grabs the mic from a very concerned Valentine. Short version:  Parrow and OdinSon will hurt anyone that gets in their way.  Dude, message received loud and clear. 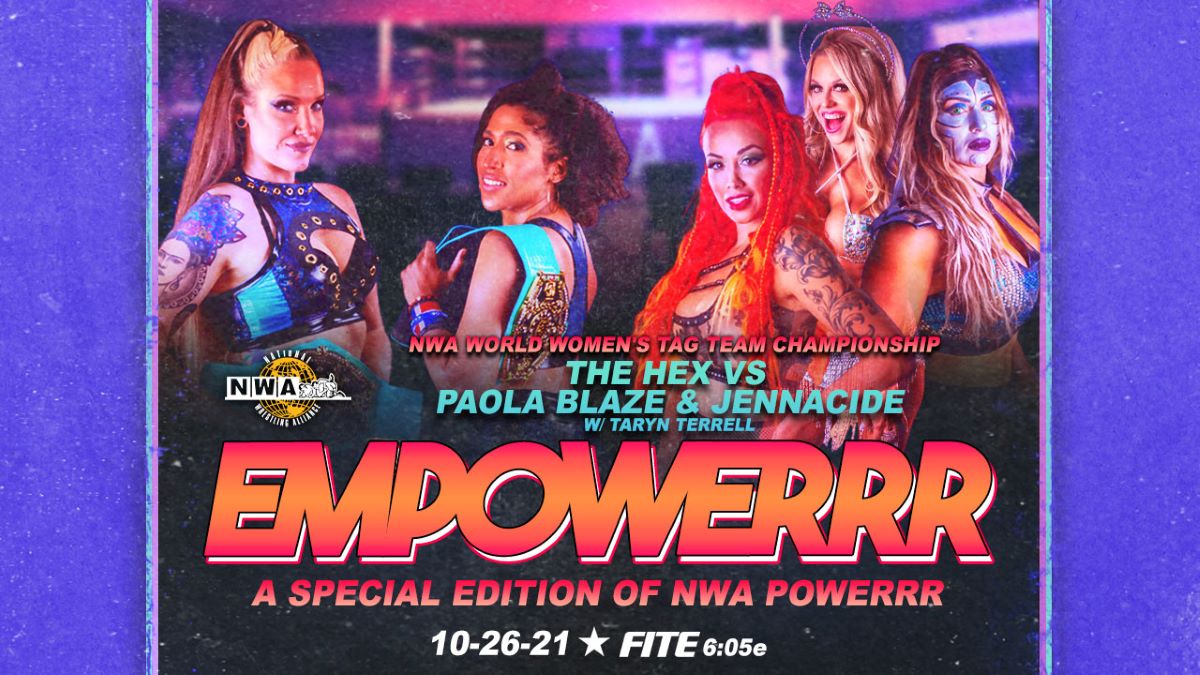 As Davis gives the boxing style intros, the fans are solidly behind The Hex, and Paige is there for backup against Terrell’s shrill antics.  Belle and Blaze start up, but it isn’t long before The Hex go full “Pinkies up!” with some sweet double team action.   Belle goes for a pin, but Jennacide breaks up the count.  Terrell distracts Belle enough for Blaze to catch her with a facebuster to cover for a close two count.  Tag to Jennacide, and she gets Belle on her shoulder and works on her squats before slamming her to the mat.  She gets Blaze in, and the Cyborg slams Blaze in a senton to Belle’s prone body to cover for a two count.  Jennacide and Blaze isolate Marti, making her your Belle in Peril.  She tries to fight her way out of the corner, firing with forearms to a short DDT to Blaze.  Belle crawls to her corner, and with one hot tag, to Kay, she becomes a Hex En Fuego.  Allysin Kay is full AK-47 to Jennacide and Blaze, and gets Blaze in a Samoan drop to cover, but Jennacide breaks up the count again.  Terrell is back on the ring apron to distract, but Paige comes from behind and sends her crashing down.  Blaze is all alone in the ring, and the tag champs deliver the Hex Marks the Spot finisher to put an end to the title hopes of Jennacide and Blaze

Your Winner and Still NWA Women’s Tag Champs:  The Hex

Once again at The Podium, May Valentine is with Melina, who is still gushing about earning the number one contendership. Melina says she has always worked at a high level, and when the time comes, she will make sure Kamille’s reign as NWA Champion ends.

As Galli and Sky talk about what they’ve witnessed and what to expect for the final match, Pope’s phone rings.  He answers (that’s rude), and has to excuse himself as he leaves commentary.

What was that all about?  Guess we won’t know because it’s time for your Main Event… 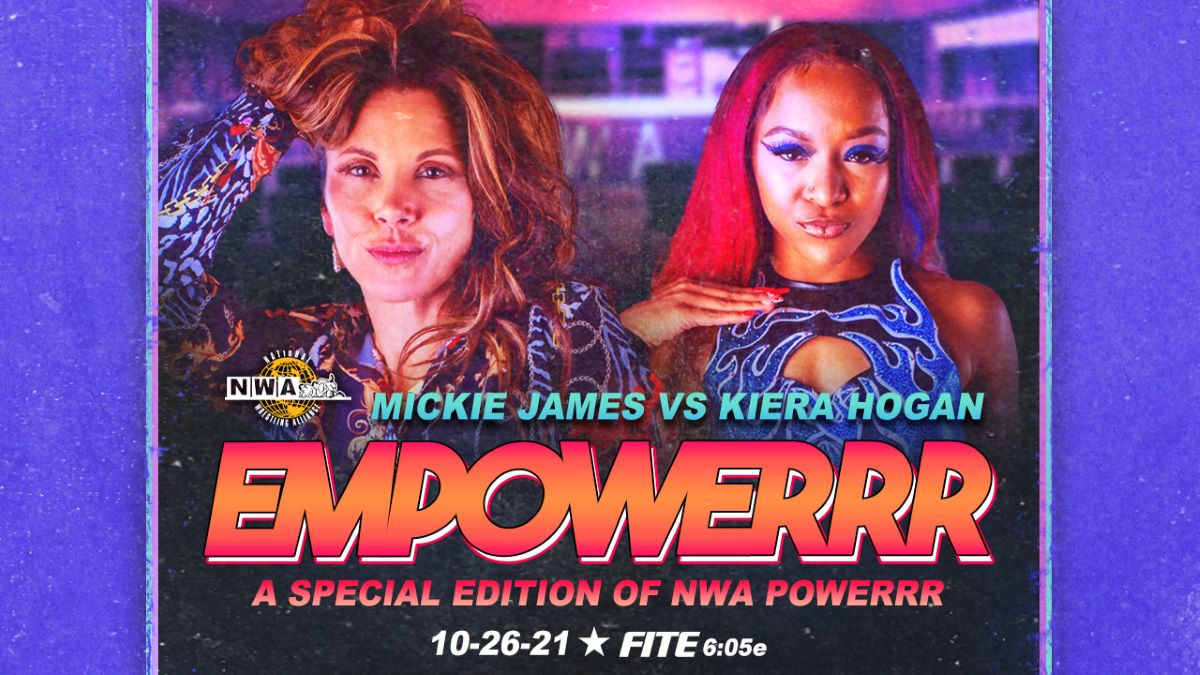 It’s a different experience to have James enter the ring without her intro music, but make no mistake, she is a fierce veteran ready to take the fiery youngster to school.  A quick hug to Hogan, and James is all business.  This is a classic tale of veteran experience versus youth and speed, and the match starts with a Test of Strength.  James bends her over, but Hogan powers back for a pin, and she gets the shoulder down for one, two…and James bridges up.  Hogan forces the shoulders back down, but James keeps bridging up.   Hogan crashes on James’ torso, but she gets out.  James hits a headlock takedown to a front face lock, and then yanks hard on Hogan’s arm, focusing on disabling her offense.  James gets Hogan in a hammerlock, and Hogan reverses, but the match is still Hardcore Country

The match goes back and forth, and Hogan manages a forearm shiver that knocks James silly.  Hogan hesitates, but finally rushes and is nailed by James’ back elbow, and James follows to a head scissors takedown. James gears up for the Mickie-DT finisher, but Hogan still has some fight left, as she throws James headfirst to the bottom turnbuckle.  James favors her left knee which is taped up.  Hogan hits a flurry of offense, with a corner splash and a back elbow and then Hogan rounds the bases for a baseball slide dropkick. She drags James’ body to the center for one, two…no.  Hogan stunned, and then goes for the Mickie-DT, but James rolls up for the upstart youngster quick for the one, two, and three!

James is still celebrating her win as the show fades to the credits, amid cheers from The Chase!

If the NWA can do more shows like this, then rest assured the future is female.  It was solid action from bell to bell.  The only quibble I had was during the tag match, and Blaze’s timing was off that threw off the match.

My question now is: “Can the NWA top their success?”  If your answer is “By Any Means Necessary”, you win the prize.  We’ll see how that shapes up as we see you in seven!