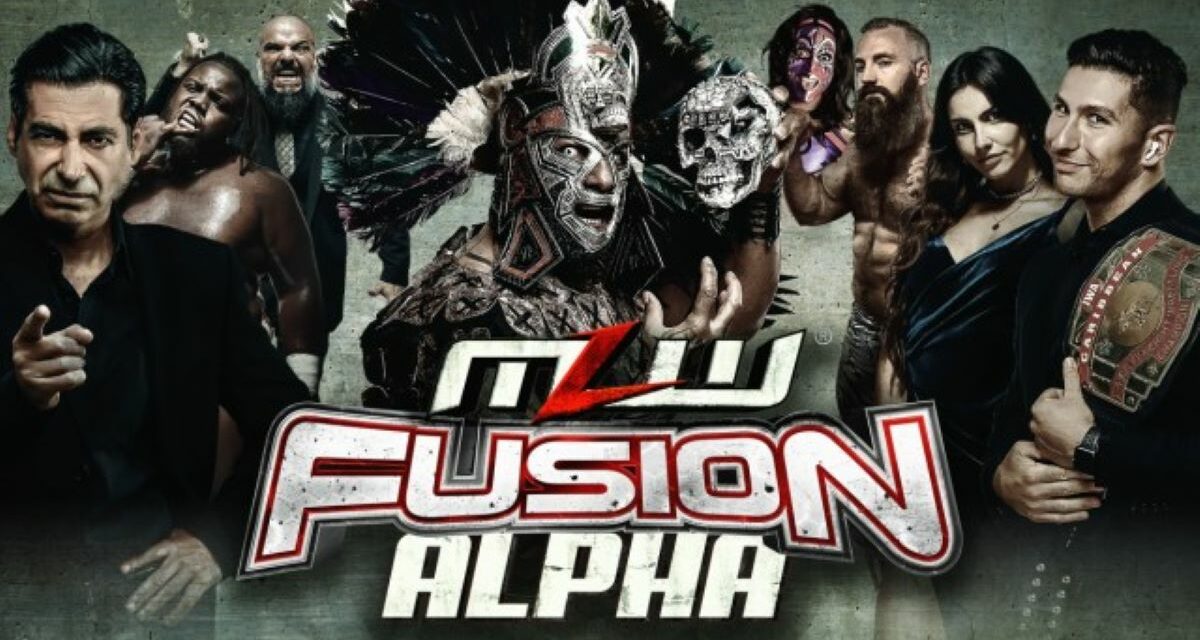 Some days, it just isn’t worth chewing through the straps to get out of the asylum.  Richard Holliday is having that same issue, after getting on the bad side of new MLW matchmaker Cesar Duran, who forces Holliday to put up the IWA Caribbean Championship against the Man of A Thousand Deaths, Mil Muertes.  So if you thought getting on the wrong side of your boss was bad, keep in mind the alternative isn’t any better.

As we get a cold open in Philadelphia, PA at the ECW Arena, your commentators Rich Bocchini and fight analyst St. Laurent turn to Holliday’s intro music and video, but, he’s yet to come out.  Huh.  Is it technical issues?  Nope, just a straight up beating by Contra Unit members Mads Krügger and Ikuro Kwon (who we haven’t seen in forever).  Who knows what shape Holliday will be in later tonight?

We’ll keep an eye on the story as it develops, as we go to the Featherweight Division…

Joining at commentary is Willow Nightingale and the Babe with the Power has a great seat to see the ringside action.  For those of you not familiar with the two combatants, Savoy originally worked in SHIMMER and is a submission specialist.  Most people have seen Holidead as one half of Twisted Sisterz with Thunder Rosa and she’s made her bones in the independents and Women of Wrestling (WoW).  Seeing Holidead lead Dr. Dax around on a chain wearing an S&M type bondage mask makes me wonder if she’ll bring out the Gimp in this contest?  Start of the match favors Savoy’s technical skill, as she is able to outwrestle Holidead with a huracanrana and Holidead powders out.  Savoy goes on the attack with a suicide dive to …

Back to the ring as Savoy keeps up the offense with a Saito suplex to a pinning combo, but Holidead grabs the ropes to thwart that attempt.  Holidead then grabs Savoy’s legs and proceeds to kick her inner thigh.  She goes low, then gets Savoy in a surfboard submission, and kicking the back of her head.  Savoy manages to get out of the hold, and now both women deliver head butts to knock them both out on the mat.  Savoy steps up with forearms, and goes to a Butterfly and then to a German suplex and running forearm.  Holidead is rocked, but has the presence to grab the ropes.  Holidead has a few tricks left, as she gets Savoy in a very deep backbreaker that bends further than necessary, and a swinging belly to back piledriver.

Someone once said, break backs and make them humble🤷🏽‍♀️😈 https://t.co/trx1vgci8r

Savoy comes back with a dragon suplex for a two count, then transitions into an arm submission.  Holidead rolls through, and Savoy smoothly goes to an arm triangle, but Holidead is too powerful, as she deadlifts Savoy and slams her to the canvas.  Savoy manages to get Holidead in an arm trap/Rings of Saturn submission dead center of the ring, and Holidead has no choice but to quit.

Your Winner via Submission:  Nicole Savoy

After match, Savoy is checked on by the ring doctor/official (this was taped during MLW Fightland, and reports were that Savoy had rode to the hospital, but Savoy came out with a bruised sternum, possibly due to either the kicks or that deep backbreaker)

Nightingale left commentary and encountered Holidead, who took out frustrations on her, then grabbed a chain used to lead Dr. Dax to pummel Nightingale.  Holidead definitely brings the darkness.

She shouldn't been in my line of site when u was upset. I think this attack was well warranted 🤷🏽‍♀️#NotSorry https://t.co/l9xeiTdUdZ

Alicia Atout is backstage with Richard Holliday.  He’s definitely in pain, and was told by doctors not to compete.  Holliday responds that he is breathing rarified air, and when he breathes rarified air, he defends championships. That promo by Holliday makes me think that this a…face…turn?  The mind boggles.

Next week, we’ll get more matches in the Opera Cup, as TJP and Alex Shelly face off, plus the debut of Bobby Fish and Lee Moriarty to move up the brackets. On, yeah!  I’ll be ready for that action.

But let’s move to the upcoming match, which is for the…

King Mo joins up with commentary, scouting Tankman during his match.  The Philly fans are divided with their cheers for The Heavyweight Hustle and MDogg, but it’s the veteran Cross that goes to strike first with a running kick and chops, but he can’t faze Tankman.  MDogg has some more in store with a flying head scissors, then a roll up to a stomp on Tankman’s chest.  Tankman goes outside the ring, and Cross uses the ropes to deliver pendulum kicks, and he follows up with a suicide dive.  The fans are fired up, as Cross goes up top.  Tankman gives chase but Cross cartwheels always.  Too bad he gets tackled by Tankman that goes to…

Ads (SIGH!  This is tiresome.)

Back to the match, and Tankman gives Cross a vertical suplex to cover for a two count. Tankman keeps the focus of his offense on Cross’ back, and he sends MDogg to the corner with a corner clothesline, followed by a slam and a splash to cover for a two count.  Cross answers back with a couple of big boots and a crossbody.  MDogg then goes to the high rent district and nails a top rope double stomp to Tankman.  Another Mafia kick send Tankman to the outside of the ring.  Cross goes for a crossbody, but The Heavyweight Hustle catches him and reverses to a devastating powerbomb to the ring apron.  He sends Cross back in the ring to cover for a two count.  Tankman still delivers the Hustle as he shoots Cross to the ropes, and he reverses with a springboard cutter and a cover gets another two count.

Cross goes up top for a shooting star press.  As he leaps, Tankman rolls out, but Cross rolls through and Tankman gets a pop up back elbow.  Cross complains to the official, but Tankman grabs him, and MDogg gets a forearm, and a kick.  He hits the ropes, but Tankman turns him inside out with a lariat and a spinning back fist puts away MDogg for good.

Your Winner and Advancing in the Opera Cup:  Calvin Tankman

As Tankman makes his way back, saying the Cup is what he’ll be showing off to his kids back home, Alicia Atout interviews Matt Cross on what happened on his loss in the ring. Cross is still upset, and claims Tankman poked him in the eye, and can’t believe that happened. He must’ve seen a different match (oh wait.  Too soon?)

Now we go backstage and Alicia Atout is with crowd favorite Budd Heavy with a beer. Atout is led off by an Azteca goon and she hands Heavy the mic.  Heavy now has a mic and a beer, and he’s perplexed what to do with it. Dude that was a missed opportunity!

We then get Emilio Sparks backstage with exclusive footage of Jacob Fatu and Josef Samael.  Fatu is still incensed he lost at Fightland, but Samael calms him down, and starts talking strategy for War Chamber. Samael tells the Samoan Werewolf to get head back in game, and they soon spy the camera crew and the chase it on.

Meanwhile, in Cesar Duran’s office, Alicia Atout meets El Jefe. Duran is impressed with “A-tout” (Alicia:  “It’s pronounced “A-toot”), and he likes her dogged persistent. Because she wants to show more of his work behind the scenes, he offers front row seats to Atout as his guest to see the carnage.

Contrived, you say? Consider it like Lucha Underground:  You buy the bit; you buy the premise.

We also gets a promo by Cesar Duran, as he makes a plea to Mads Krügger to meet up with El Jefe for other opportunities.  Hmm, I smell evil afoot.  Either that, or I need to put on underarm deodorant.

But we can’t speculate on that, as we head to the Tale of the Tape…

So, yeah…Holiday has a chance, right?  Well, let’s see as this is your Main Event…

As Holliday comes out to the ring, he’s still sore from the backstage attack, and he gets a mix of cheers and boos from the Philly crowd, while the big story is Duran with Atout are at ringside in their “private section”, and the fans chant “Muertes Gonna Kill You!” chants at Holliday.  To paraphrase The Falcon and The Winer Soldier:  They’re outta line, but they’re right.

Really, the match is a near glorified squash match, and heel/heel matches just don’t appeal to me.  But what keeps this match intriguing is how the camera pans to Atout getting concerned by the beating that Muertes delivers to Holliday.  Even though neither of them like each other, the little expressions by Atout tell a different story, especially as Holliday gets his arm yanked by Muertes on the ropes, and match is all Muertes.  As the crowd cheer the Man of a Thousand Deaths (jerks), now the Contra Unit Sentai Death Squad comes out and stare menacingly at the ring.  Now Holliday has another problem to contend with, as a clothesline by Muertes leads to

Ads (Maybe it’s the drink talking…No, scratch that.  It *IS* the drink talking when I say that I need to fill the spaces of these stupid ad breaks with some wrestling themed drink recipes.  Better note that, in case I forget)

Back to the massacre…err, “match” as Holliday is sent out of the ring to Duran’s section, as he dumps champagne on his head, much to Atout’s chagrin (Me:  That’s alcohol abuse, you Monster!!).

We also find out from Bocchini and St. Laurent that Contra Unit are now attacking EJ Nduka, and Your Boy Hammer tries to even up the odds.  Meanwhile, back at the ranch…err, ring, Holliday tries to beg off, but Muertes Keeps up the beatings with clubbing forearms and a straight shot to his jaw.  Up top, Muertes tries a superplex, but Holliday shoves him off and gets a flying forearm.  Now Holliday gets some offense going with a spinebuster that gets a two count.  Holliday goes for a Boston crab, but Muertes is too powerful and fights out.  Holliday goes back on the attack, but Muertes gets a scoop powerslam to cover for a two count.  Holliday manages to get Muertes in a torture rack to a swinging neckbreaker to cover for another two count.

Muertes sends Holliday to the outside, and now Contra Unit make their presence known, as Ikuro Kwon comes from behind and nails a spinning kick to the back of Holliday’s head, and Muertes comes out with a Straight to Hell flatliner to the concrete floor.

Atout is beside herself, as Muertes calmly rolls Holliday’s carcass back in the ring to pin him for one, two, and three.

Cesar Duran toasts the success of the Main Event, but Atout knocks out his drink right out of his hand and storms away, as Muertes celebrates his new title as show fades to black.

Even though the Main Event was a one-sided affair, it did its job and started setting the stage for more violence for anyone who crosses El Jefe, Cesar Duran.  What that does to Holliday as a heel, or his “relationship” with Alicia Atout, remains to be seen.

As for the Featherweight division, things are shaping up rather nicely, as is the Opera Cup picture, and Cross/Tankman may have more in the tank (pardon the pun) down the road.

With War Chambver around the corner November 6th, let’s see what MLW has in store…provided there’s no more ads during the matches.  Until then, see you in seven!