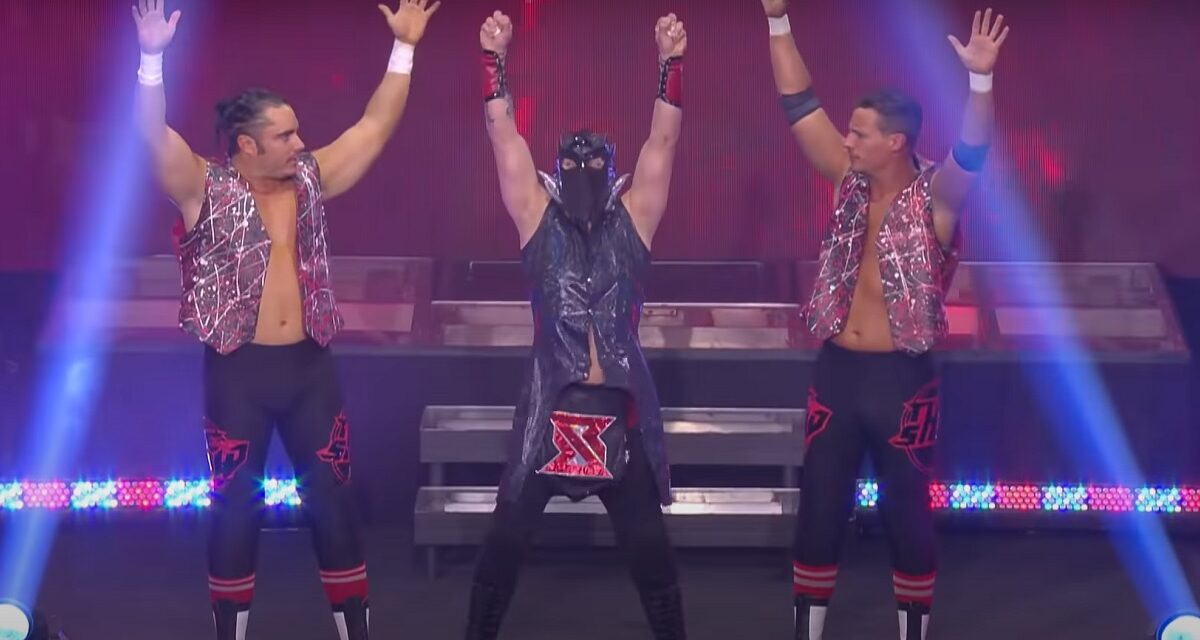 Hey yo, AEW faithful, and welcome to another Dark recap. This week, the show was filmed in front of a full crowd in Miami, and they got to see six matches over the hour.

Some of the talent had some good showings this week: Jamie Hayter had a fun opener with the DMD Crew; meanwhile, the Gunn Club showed how they are really settling into their heel personas; Frankie Kazarian looked great, even though his opponent Aaron Solow hit some rough spots. And the ladies Trios match was really good – and unlike the one we got on Elevation on Monday, the teams seemed to gel during the match. It’s hard to pick a performer of the night – it’s kind of a toss-up between 2.0/Garcia and Red Velvet / Jamie Hayter, but I’ll go with the latter. Note – the Gunn Club and Dark Order were very good too, but for my picks, I like to focus on the up-and-comers.

The match of the night definitely goes to the main event of the Dark Order against 2.0, Daniel Garcia, and Serpentico. This one had a bit of everything, from comedy by Serpentico and Colt Cabana, strong technical wrestling by Garcia and 2.0, high-flying by Grayson and Angels, and big power by Dark Order 10.

2. The Gunn Club vs. Dean Alexander, Alex Chamberlain, and Diamond Sheik. Colten and Austin started the match with some quick tags and some great double team maneuvers. The younger Gunns have settled into their new role as heels very well, yelling and acting like jerks on the ring apron, and doing some cheap double-teaming, as if they were channeling their father from his DX days . The patriarch of the family, Billy Gunn, somehow continues to defy age as he looks in fantastic shape and can still float around the ring with the best of them. Colten would hit the Colt 45 butterfly suplex for the finish.

3. Nyla Rose, Diamanté, and Emi Sakura (w/ Vickie Guerrero and Lulu Pencil) vs. Red Velvet, Kris Statlander, and Thunder Rosa. Red and Diamanté started off the match with a bang. Statlander kept up the fast pace before Nyla Rose slowed things down a bit. Thunder Rosa had a great bit with Nyla and Emi Sakura, elevating this one to match of the night contender. In the end, Red Velvet hit The Final Slice on Sakura for the win. This was a great trios match, and it’s the second time that Nyla, Diamanté and Sakura have worked together – up until the loss, they looked great.

4. Jade Cargill and “Smart” Mark Sterling cut a promo. Mark is great on the mic as Jade’s agent and lawyer and did most the talking. With her imposing figure towering over Mark, Jade is entirely believable as someone that could beat the more experienced women competing in the TBS title tournament.

5. Lance Archer (w/ jake Roberts) vs. Eddy Hernandez. Eddie Kingston joined the broadcast team for this one, leading to some insane commentary. Archer ran over Hernandez and hit the Black Out for the win. Next up for Archer is Kingston in the first round of the Heavyweight title tournament.

6. Aaron Solow (w/ the Factory) vs Frankie Kazarian. QT Marshall joined the commentary team, while Nick Comoroto watched the action from ringside. With the numbers against him, Kaz tried to keep this one mostly in the ring with Solow. Comoroto – who is over with the crowd, got an off-camera pop taking his straightjacket off.  All in all, this was an okay match. Kaz looked great but Solow stumbled a bit here and there and flubbed a few moves. Kaz would catch Solo in the Cross-face Chicken-wing for the Tap out.

7. 2point0, Daniel Garcia, and Serpentico vs. Dark Order members #10 Preston Vance, #5 Allen Angels, Stu Grayson, and Colt Cabana. This was just a really fun match from start to finish. 2point0 and Garcia are fantastic together and are really the unsung heroes of this summer’s talent acquisitions by AEW. Serpentico – who was wearing gear that matched the rest of his team’s – had some genuinely funny spots during this one. The Dark order team would start strong, but eventually the more technical Garcia and 2point0 would take over and control most of the match. Serpentico continually tried to get involved, but to no avail. The Dark Order took back control with #10 running wild, some acrobatics for Grayson, and then a great comedy spot with Colt Cabana. The match finished the only way it could: with Serpentico getting locked in #10’s Full Nelson and passing out.