NWA POWERRR-Surge: Setting the stage for upcoming matches By Any Means Necessary 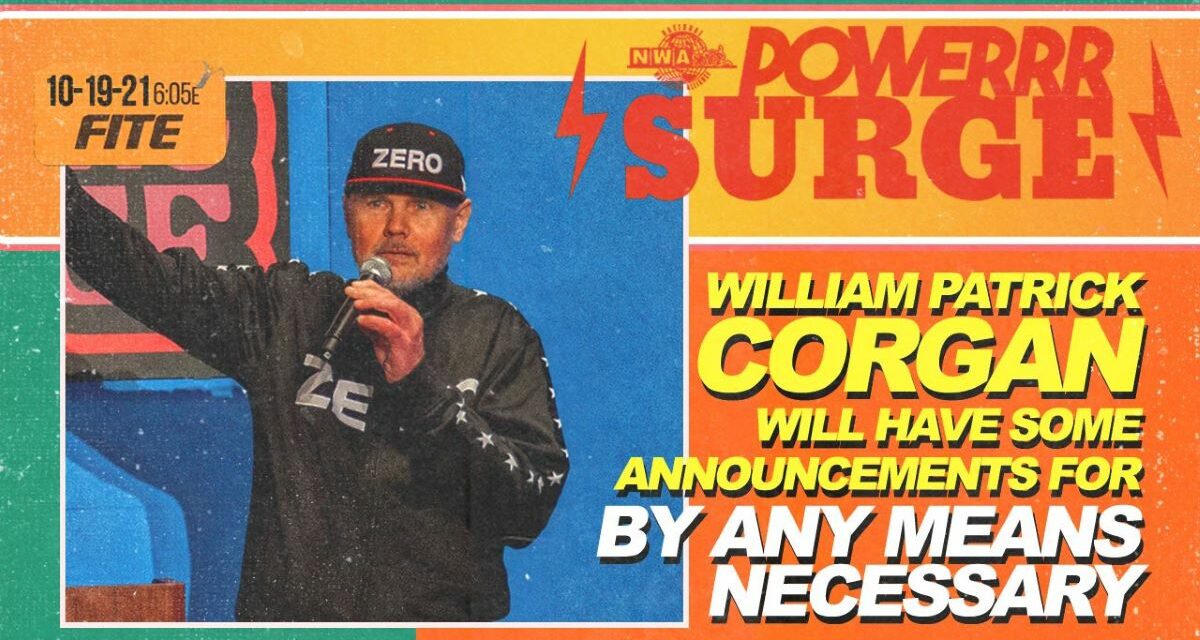 With an upcoming supercard by the National Wrestling Alliance coming up October 24th, featuring a steel cage match with Crimson and Jax Dane.  We can’t wait any longer, so we need to step Into The Fire for this highlight show, as the thinking man’s Gordon Solie welcomes us to another POWERRRSurge episode.

(Author’s Note:  Since this show is more a highlight reel than a normal show, it make no sense for me to rate the show as a whole, since it operates in another fashion.  It’s kinda like AEW Dark only…not.

That said, I’ll give a rating on the individual matches themselves, and we’ll talk about what worked and what didn’t.  Sound good?  Yeah, thought, you’d agree.)

Time to head into your First Match of the night at the Chase Park Plaza in St. Louis, MO… 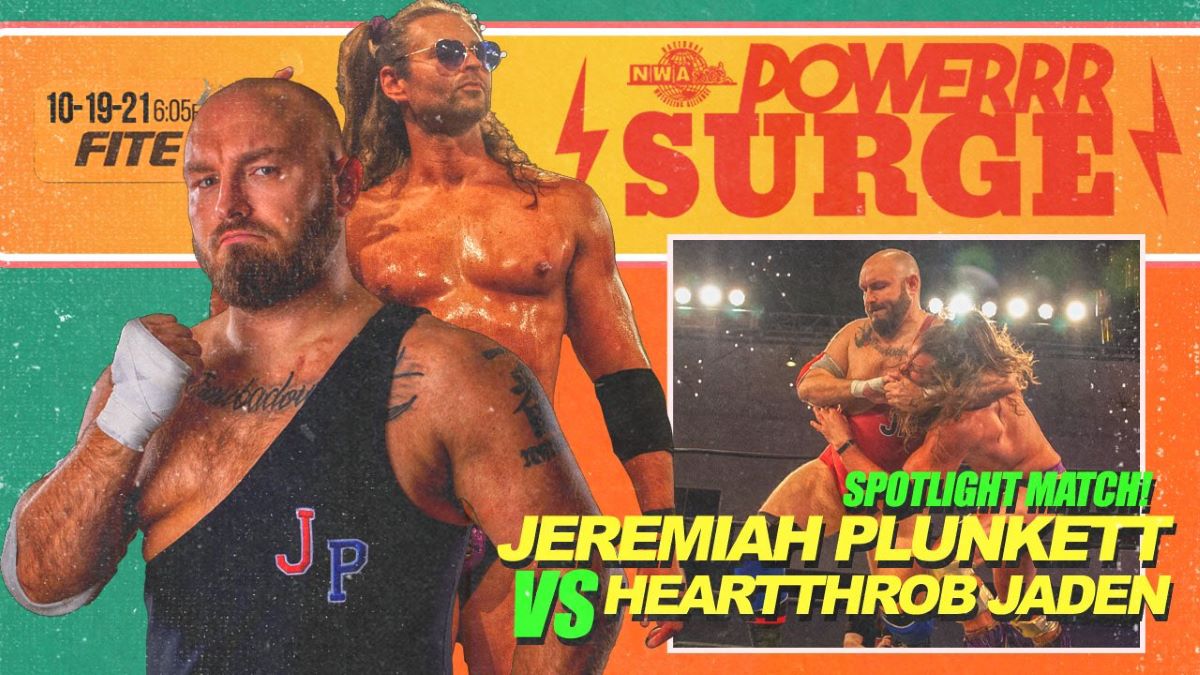 It’s the Taterville, TN Titan versus…a pigtailed Jaden.  Get a Sailor outfit, and he’d be perfect at Sailor Moon, in case he’s thinking of a Halloween outfit.  In any case, this is a case of a technical Plunkett facing a flashy Jaden, whose wrestling (and style) are hard to predict.  Plunkett takes control early on with a gut buster, and Jaden manages to duck outside.  Plunkett tries to bring back Jaden via his pigtail, but Jaden yanks his throat on the ring ropes.  Now stunned, he nails a discus clothesline to Plunkett to cover for a count one.  Now the “Heartthrob” gets in the driver’s seat and takes it to Plunkett with a snap mare to a punt in the back.  Plunkett is hurting, and Jaden blows him a kiss before getting the elbow drop to cover for a two count.  Jaden hits a backbreaker, and goes for a superkick, but misses the target, and it’s Good Ol’ Plunkett throwing what I’ll dub “Tater bombs” as Jaden blocks the punches with his face, and Plunkett seals the deal in the corner with an avalanche DDT that gets the pin and the win.

Your Winner via Pinfall: Jeremiah Plunkett

A solid affair by the Taterville, TN Titan, and he is definitely is over with the NWA crowd.  This was a better showcase for Jaden since the Battle Royale at NWA 73, and he definitely has some flair with his hair.  It will be interesting to see how far Jaden can go when paired with another opponent to bring the best out of this “Heartthrob” in the weeks ahead. 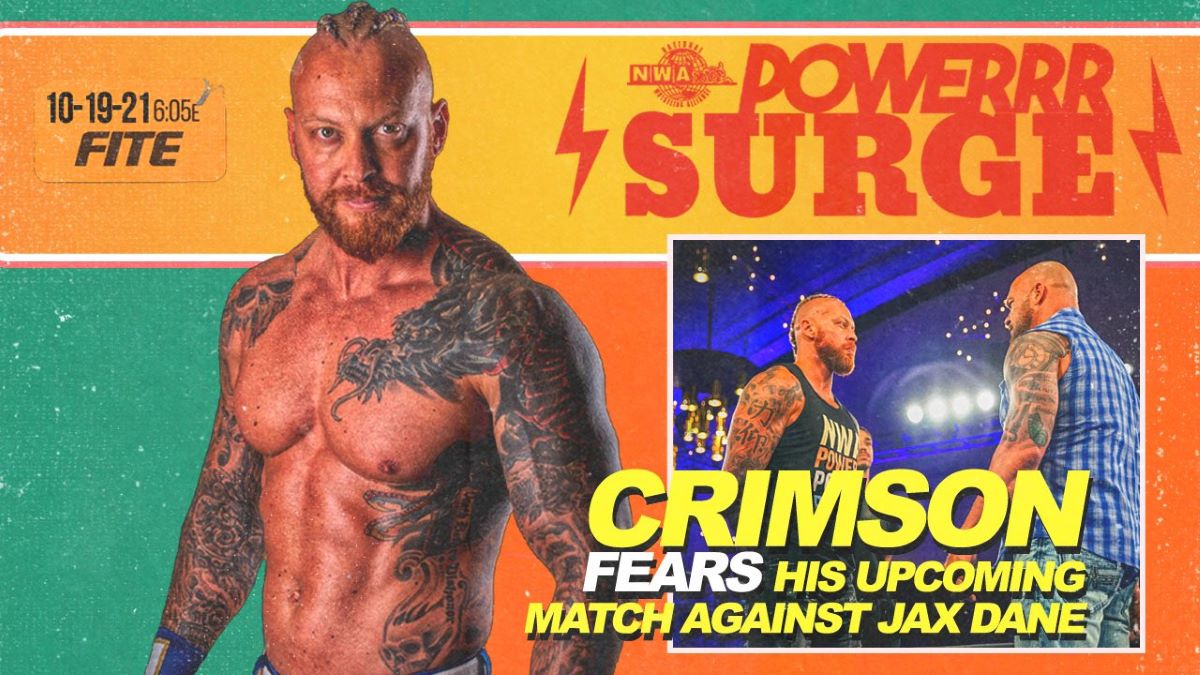 We then go to an interview with Crimson conducted by the Post Show hosts Gary Horne, Wil Martin, along with Kyle Davis and Joe Galli.  Crimson states he this isn’t his first cage match, but it might be his last especially when facing His former War King member.

(Author’s Rant:  If you want to hear more on Crimson’s thoughts on his match and his work in previously in TNA/IMPACT as well as the NWA, we at Slam! Wrestling will have an upcoming interview that will post in the days ahead.)

Galli gives us a recap of the betrayal by Strictly Business to Nick Aldis, and how the piledrivers sustained by Thom Latimer left him with stingers.  But, Aldis still had enough power to go out to Poland for a prior commitment to face Gracjan Korpo in Chorzow.  Korpo is wrestling Aldis in a suit and tie (think Irwin R. Shyster and Ivan Putski’s love child).  Listening to the commentary in Polish is something to behold.  You may not get the language, but you can get the gist of the lingo with things like “superplex.”

“The National Treasure” is in firm control until Chris Adonis came out to distract. Korpo grabbed his briefcase to clock Aldis, but missed.  The Dealer grabs it and cracks him over the head, but the ref catches him in the act and DQ’s him. Even in a loss, the Polish crowd showed their appreciation, and everyone there agrees “to jest niesamowite”(which means, “This is awesome” in Polish)!

Now let’s go stateside for some smash mouth wrestling with… 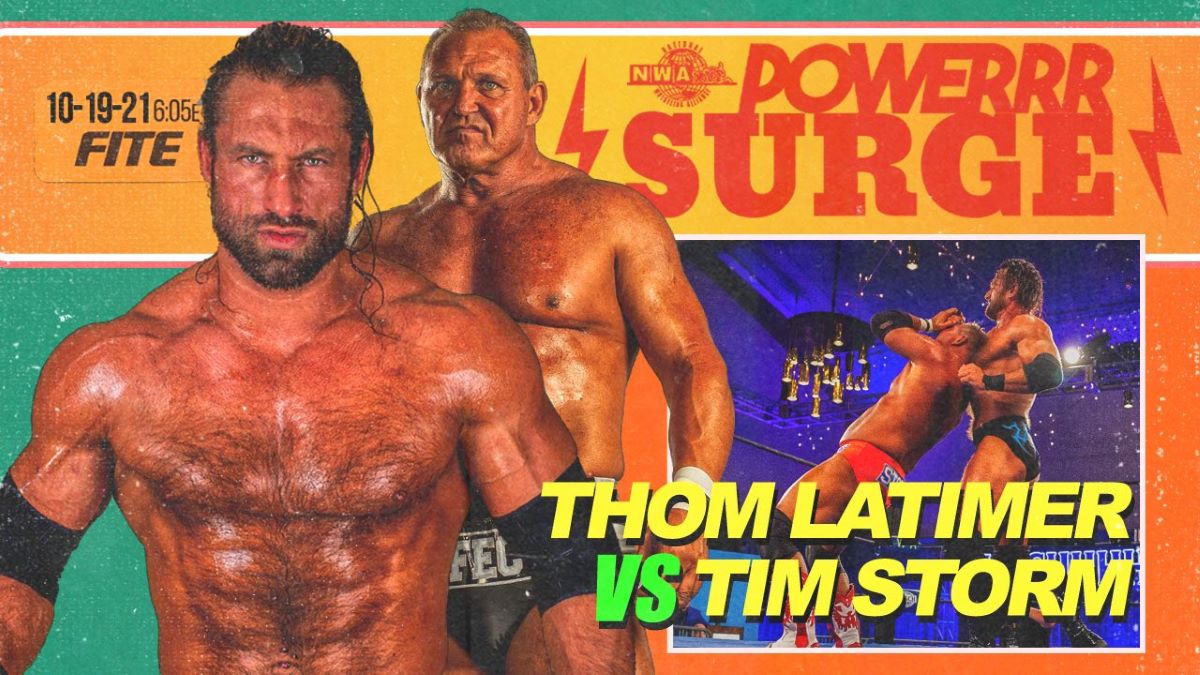 Joe Galli calls this the “Battle of the Behemoths,” and this is not going to be pretty by any means.  Austin Idol joins the commentary, and Velvet Sky is not having it.

(Author’s Drunken Rant:  The chemistry between Sky/Idol is just off-putting.  This week it was a bit more subdued, but still distracting when focusing on the match.  While we’re on the subject, why is the camera crew shooting empty seats?  I can hear the crowd, but can’t figure out if they couldn’t just move the audience in attendance to get their reactions to the action in the ring.  If folks are watching for the first time, that ain’t a good look to have.  End rant!)

As Storm took off his shirt, Latimer went for a sneak attack but Momma Storm’s baby boy baited him in.  He’s just throwing bombs at the King of All Evil, but Latimer manages to deliver a leg lariat.  From there, it’s all Latimer in control with a scoop slam and an elbow drop to cover for a two count.  Latimer goes to corner, but gets rolled up by Storm for a two count.  Latimer answers back with a clothesline and covers for two.  Latimer ups the violence with a snapmare, and then a gutwrench suplex to cover for two.  Latimer with a chinlock, but Storm is a-brewing, as he fights out with a jawbreaker, follows up with clotheslines and an Irish whip to a big boot.  Storm gets in another boot to a neckbreaker, but can’t convert to a pin as he starts to feel Latimer’s attacks.  Storm with a float over suplex, but still gets a two count.  He tries for the Eye of the Storm finisher, but Latimer rakes his eyes while the ref couldn’t see.  Dazed, Latimer hits the piledriver and gets the three.

The big story is how Latimer is now the Big Bad, and his handling Aldis and Storm (both former holder of the Ten Pounds of Gold) is solidifying his presence as a top player.  Only time will tell when, not if, he challenges current champ Trevor Murdoch for the heavyweight strap.

Galli then goes to NWA Owner/CEO William Patrick Corgan has announcements on the matches heading into the supercard By Any Means Necessary. First, Kenzie Paige will be facing Kamille for “The Burke” and decided the match will be contested under two out of three falls. Corgan reasons that the actions of Kamille of late bullying others or punching people like Melina from behind will not stand, and Corgan states she can’t do whatever she likes and she needs to be held to a higher standard as the NWA Women’s Champion.

As for the Chris Adonis/Thom Latimer versus Trevor Murdoch/Nick Aldis, Corgan wants to up the stakes with a stipulation, but thinks it’s fine on its own as the dynamics between the four men is enough as is.

Finally, onto Jax Dane and Crimson in the steel cage.  Corgan wants them to settle their feud in the ring, and nobody gets in or out until it’s over. Corgan notes this will be broadcast over two episodes of POWERRR in November.

Speaking of, Galli mentions next week will be an EMPOWERRR-ed episode with the Women of the NWA.  But he wants to take us back to the EMPOWERR PPV where “Legit Leyla Hirsch challenged Kamille…

(Author’s Sleepy Drunken Rant:  The Oaxacan Old Fashioned I just made has kicked in another gear, and I don’t recap recaps I recapped.  If you want to know how the match went, go here.)

There will be more to cover in the next few weeks, so for now, see you in seven.