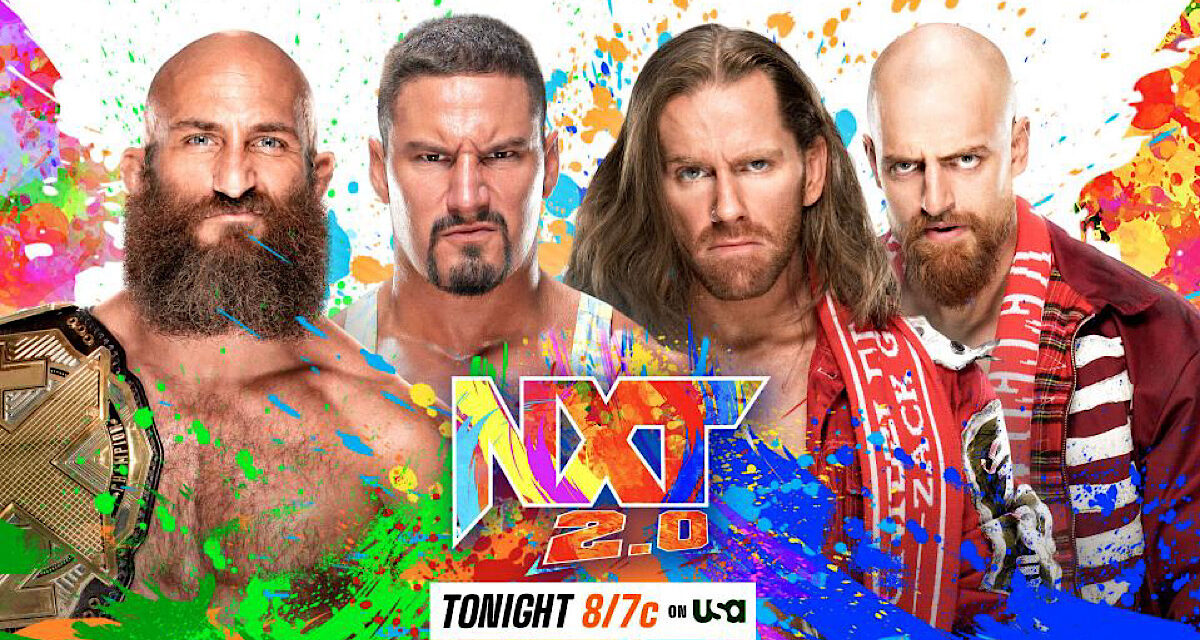 NXT 2.0 is all about newness, and last week, Carmelo Hayes’ crowning as North American Champion exemplified it. Certain things, however, aren’t as fresh. “Can Tommaso Ciampa and Bron Breakker coexist?” asks someone who was born yesterday.

Regardless, Hayes opens tonight’s episode, accompanied by Trick Williams — who is indeed “‘bout it ‘bout it.” It’s an assertive “Melobration” until NXT staple Johnny Gargano interrupts to issue a challenge. Williams throws shade at Gargano’s “daughter” Indi Hartwell, which prompts Dexter Lumis to attack. Is “Johnny Wrestling” finally back?

Chase University’s own Andre Chase has a small but respectable student section. But it doesn’t assist in getting through Jones, who gains the pinfall victory with a splash. The Orlando audience, the home team assumably, is really behind Jones; the sky’s the limit.

The Creed Brothers vs Imperium

Diamond Mine’s Malcolm Bivens cuts an impressive backstage promo before The Creed Brothers’ painfully generic entrance theme offsets it. On the contrary, Imperium’s “Symphony No. 9” by Antonin Dvorak is pretty cool. They’re the faces against the beefy brothers, and distraction by Roderick Strong gives the latter control. But Kushida and Ikemen Jiro even the odds, allowing Marcel Barthel to roll up Julius Creed for the surprising win.

Kyle O’Reilly and Von Wagner have an outdoor workout, chopping wood and what have you. Looks like plans changed for that O’Reilly singles run.

Joe Gacy’s darker presentation is really intriguing, especially with the addition of Harland (f.k.a. Parker Boudreaux). A vignette shows a coalition forming between them.

Santos Escobar, an underrated promo for sure, speaks about Carmelo Hayes stealing the North American Championship last week. Lopez tries speaking next, but Jade and the sound guy interrupt. And despite it being Tuesday, not Monday, a consecutive roll-up victory occurs in Jade’s favor. At least it keeps these matches short.

It’s again not Monday, yet McKenzie Mitchell hits the line: “Can you two coexist?” Bron Breakker and Tommaso Ciampa show backstage tension — can they coexist?

The winner of this triple threat spins the wheel and makes the deal, choosing the stipulation for the NXT Women’s Tag Team Championship match at Halloween Havoc. There’s a stark contrast between Shirai’s abilities compared to her opponents, as Jayne trips up an outside dive. Commentator Wade Barrett flat out says, “Horrible,” which maybe describes the injury Jayne appears to have suffered. The matchup becomes a one-on-one, and Shirai does her thing, eventually hitting the top-rope moonsault to gain the victory. Shirai spins the wheel, making next week’s triple threat tag a “Scareway to Hell” ladder match.

A vignette for Solo Sikoa plays, revealing his debut matchup to be at Halloween Havoc next week. Meanwhile, Ikemen Jiro and Kushida talk “Style Strong” in the bathroom.

Everybody’s favorite Chicago gangster turned wrestler is back. “Forget about it,” D’Angelo says after pinning his opponent with a spinning neckbreaker. He’s interviewed in-ring about Lash Legend’s producer Mark, who was kidnapped. One more “forget about it” pops the crowd and clears his alibi.

A segment of “Duke’s Poker Room” shows Duke Hudson playing poker in his room. What else would it be?

Before the matchup, LDF attacks their opponents backstage, but the victims continue on. Santos Escobar’s interference outside keeps momentum in LDF’s corner until Jensen receives the hot tag, taking out Escobar ringside. But Joaquin Wilde and Raul Mendoza take advantage, hitting their double-team finisher for three.

A video package hypes up Mandy Rose and Raquel Gonzalez’s NXT Women’s Championship match at Halloween Havoc. Afterwards, a spooky vignette previews either a debut or return of an unknown name.

Carmelo Hayes and Trick Williams are looking for their stolen North American Championship but instead find an invitation with Dexter Lumis at Halloween Havoc.

While Knight should probably be winning championships elsewhere, he’s fighting for the opportunity to be host of Halloween Havoc. He helps Waller look good until hitting the finishing facebuster for three. A win’s a win for Knight at this point.

The chances of Ciampa and Breakker coexisting drastically go down a week before Halloween Havoc. Orlando loves their Ciampa as he takes control preceding picture-in-picture, but James Drake halts the momentum. He and Zack Gibson continue the assault until Ciampa forcefully tags in Breakker, who makes the fed-up comeback. A massive powerslam from Breakker puts it away, although Ciampa doesn’t stick around to celebrate.

The biggest issue besides the overdone wrestling tropes and angles is the actual wrestling. There was nothing to write home about in tonight’s go-home show in terms of in-ring action. For a brand that onced prided itself with the best matches in the world, the mighty sure have fallen. But in general, it’s another uninspired main-roster lite show that won’t make a difference in WWE’s product.