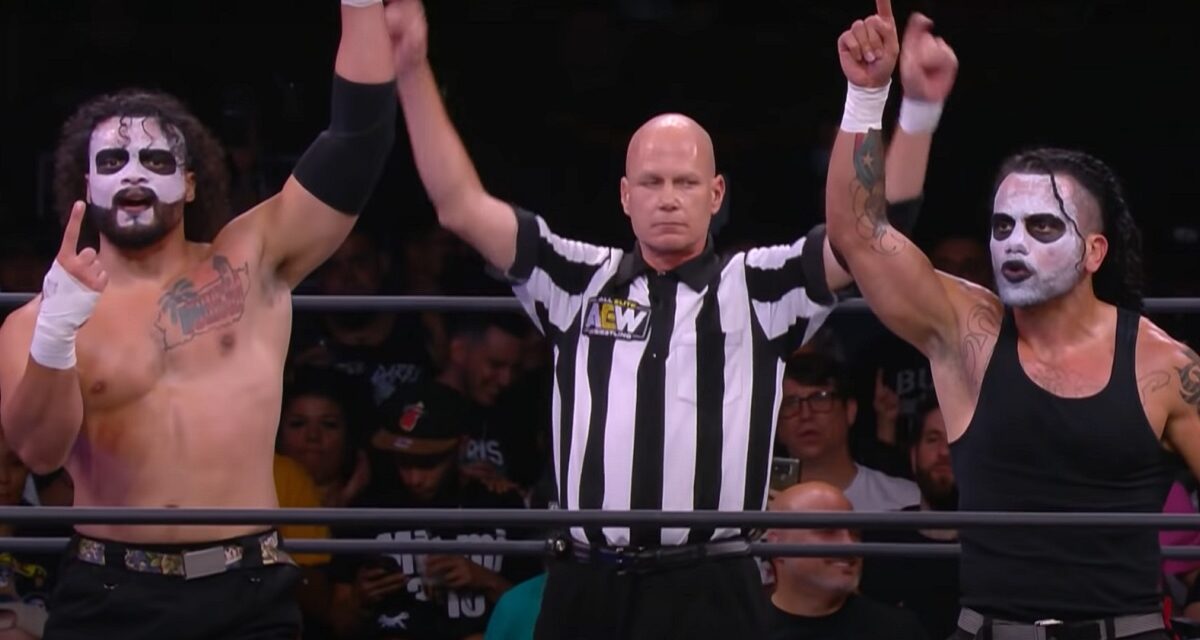 Hey yo, AEW faithful, it’s time for another episode of Dark Elevation. It was a bit of a mixed bag this week, with some odd pacing, as two squashes happened back-to-back.

Proud and Powerful got the first full length match, where the Maluta brothers got some offence in. Something may have gone wrong, as there were two visible edits at the beginning of the match, begging the question as to what was edited out. But, despite the edits, it was still the best match out of the night by far.

The main event was a six-woman tag, and though it was fun for the most part, it just seemed like they put three random heels together against three random faces without much story or reason. That said, KiLynn King and Red Velvet did make the best of it, and are my picks for performers of the night.  I can’t really pick any of the matches for match of the night, since clumsy edits kind of ruined things.

1) Dustin Rhodes vs. Gustavo. Dustin looked great as he ran over the young Gustavo in a couple of minutes. The short match ended with Dustin’s new move the Back Lift Driver, which is sort of a Butterfly Sidewalk Slam. Dustin looked and moved great in the ring and I can’t wait to see what the 52 year old will do with Brian Danielson in the Heavyweight title tournament opener.

2) Wardlow vs. Will Austin. Wardlow entered to audible cheers from the crowd as people are desperate to love him. This wasn’t much more than a squash. Wardlow hit some hard clotheslines, a Power Bomb, and the Casualties of War knee strike finisher. The crowd seemed to love Wardlow’s move set, as they chanted “one more time”; thankfully for Austin, Wardlow refrained. It’s obvious that the crowd is ready for a Wardlow face turn, though I don’t think it would work too well, as he’s created a character that is over for being ruthless and brutal, which isn’t typically how faces act.

3) Proud and Powerful (Santana & Ortiz) vs. Jaka & Sean Maluta. Something strange happened at the beginning of the match, as there were two visible edits right at the beginning of the match. I’m not sure why, because what I did see should have locked this one down as match of the night. PNP’s tandem offence looked fantastic and the Maluta Brothers got some good strikes in. Even with the strange start, this was a very fun match, ending with PNP hitting the Double Face Breaker, which now has a name: the OIC (Outline in Chalk).

4) Red Velvet, KiLynn King & Ryo Mizunami vs. Nyla Rose, Emi Sukura & Diamanté (w/ Vicky Guerrero & Lulu Pencil). Diamanté and Mizunami kicked things off, and though I love Diamanté, I just can’t get into Mizunami’s comedic powerhouse style – to me, everything just looks fake. It wasn’t until KiLynn King entered the match that things started to pick up. King and Velvet did some fantastic double team work together – I’d love to see them tag together in a more formal capacity.  Emi Sukura had a good showing, giving as well as she got. But it was Nyla eventually out powering King with the Beast Bomb for the win.