WWE Raw: Bianca Belair tries her best to send Charlotte Flair away without her gold 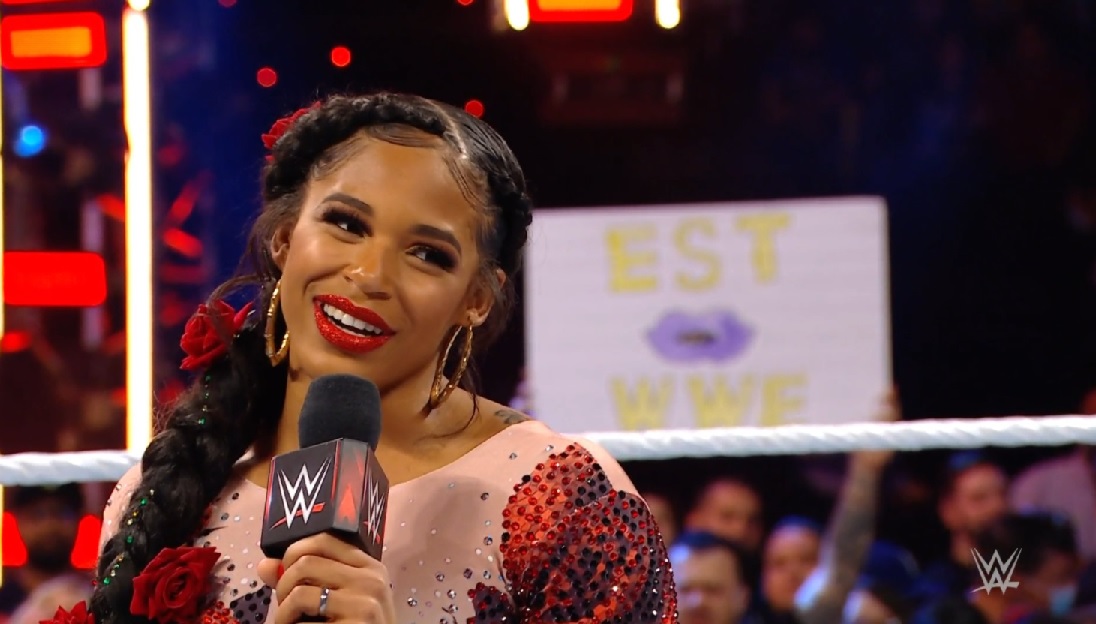 It’s time to get back in the saddle. By that I mean that I covered WWE Raw for many, many a moon on this very site, before being lured away by the chance to change to another wrestling show to freshen things up. My colleague Dale Plummer has made this beat his own, but since he’s unavailable this week, it’s time to see what I’ve been missing as WWE enters the stretch run to Crown Jewel. To USA we go, just as we’ve done so many times over the years.

Sporting a wildly striped bodysuit and some killer heels, Charlotte Flair wants to know why the red carpet hasn’t been rolled out for her. No “thank you Charlotte!” chants? A title defense against “some rookie,” Bianca Belair? Charlotte calls that bullcrap and wonders if there is some type of conspiracy against her. After all, Bianca isn’t even on the Raw roster yet and is getting two chances to win a title in less than a week. Hey, look, Bianca is rocking her own bodysuit and heels. Dale didn’t tell me I’d need to be a fashion reporter to sub for him! Belair says she deserves the rematch and hopes Charlotte uses the loss she’s about to take tonight as fuel to make herself better going forward. Charlotte hears enough and goes for a cheap shot, kicking off her heels to go for a kick, which she misses. Belair goes for the KOD (with heels on), but Flair escapes to the safety of the floor.

Xavier Woods is asked how big his run in the King of the Ring tournament is, and he says it’s of the utmost importance. Kofi Kingston vows to be watching his back during his semifinal match so he can fulfill his destiny. Hail, King Woods. Maybe.

You know what’s at stake here: The winner goes on to face Finn Balor in the King of the Ring final on Thursday at Crown Jewel. The announcers put over the idea that becoming King of the Ring was a childhood dream for Woods, and it’s definitely plausible. The specter of interference from Mahal’s henchmen definitely hangs over this bout, but even after a timely distraction, Woods is able to get his hand to the bottom rope to avoid what appears to be a sure three-count. And what do you know, Woods rolls on from there and gets the job done, pinning Mahal with a big flying elbow to punch his ticket to the final.

Earlier today, Austin Theory revels in looking down at Jeff Hardy after beating him last week when the 24/7 championship chase rolls through his interview. R-Truth angers Theory by bumping into him and possibly challenges him to a match. Hard to tell with Truth. As it turns out, he didn’t accept a match for himself but for one of his friends. Yes, it’s Hardy.

Will Theory prove last week’s victory was no fluke, or … yeah I guess if he loses it was a fluke, perhaps. Hardy still moves really well for a guy almost as old as me, but it might not matter when Theory bounces Jeff’s face off his knee. Indeed, it’s enough to keep Hardy down for the count again, and Theory can’t help but take a post-victory selfie. Hey ref, you didn’t check his tights for his phone? Hardy administers a Twist of Fate while his foe is gloating, then take a selfie of his own.

Drew McIntyre goes to talk to Big E to see if they can hash things out. Breaking: They’re going to give it a shot.

But first, Adam Pearce and Sonya Deville discuss their plans for the Raw season premiere when they’re interrupted by a whiny Flair. She smells conspiracy, but promises to be not only the Raw Women’s Champion but the new face of Smackdown very soon.

Since we’ve seen the “will they coexist?” storyline play out so many times in the annals of WWE history, the question is less one of if Big E and McIntyre will have a misunderstanding and end up at odds, and more one of when. McIntyre hits a cool spot when he Alabama Slams Ziggler onto his own partner, but the heels bounce back from that humiliation quickly. Lo and behold, the faces do get along to finish the match off, with McIntyre tagging Big E in for a Big Ending that secures the victory. They shake hands after the win and have a testosterone fueled conversation but refrain from scrapping.

Your boys the Street Profits are ready to return to Raw, and damn if they aren’t the best possible hype men WWE could have. They almost make me want to watch Crown Jewel while I’m on vacation in Las Vegas. Almost. Their lovefest for all things WWE is crashed by AJ Styles and Omos, who talks a lot more than last time I was watching Raw regularly.

I’ll admit that I did not know the Hurt Business was still a thing. This, of course, is a bit of a warmup for Mansoor ahead of his meeting with Mustafa Ali at Crown Jewel. Mansoor recovers from an early beating and gets the victory, then takes no guff from Ali when he comes out to talk some smack. That is an intense bilingual retort, and Ali looks a little shook.

From separate locations, Goldberg and Bobby Lashley have a no holds barred interview where it sounds as if Goldberg threatens to kill Lashley and he notes he could call the authorities to have him arrested. Fun. Lashley goes on to call Goldberg a bad father, they talk more smack, and that’s that. “Are you finished yet, dude?” Ah but Bill, that could apply to both of you.

Riddle says he had faith that Randy Orton had a plan all along last week, despite the frustrated Viper’s assertion that he had no plan. He asks Riddle if he wants the smoke, and I’m not certain they’re talking about the same thing at this point.

Let’s face it, the red Solo cups belong on the red brand. That’s just facts. The announcers mention the bangers the Street Profits put on with the Usos on Smackdown, and they’re not wrong. But RK-Bro has a lot of momentum heading into Crown Jewel and appears to have most of the crowd on its side to boot. Just as it appears Orton is ready to use an RKO to put away Montez Ford, AJ Styles’ music hits, he launches into a Phenomenal Forearm, and Omos comes down the ramp. The match is thrown out, but Styles and Omos simply want to dish out some pain to both teams. Unlike Orton, Styles does actually have a plan, and he and Omos just pulled it off successfully, punctuated by Omos laying out Orton with a roundhouse kick.

Winner: None (due to outside interference)

Lest we forget, The Man is coming back around to Raw next week.

Before the match even gets underway, Zelina Vega, who awaits the winner of this contest in the tourney final, comes out to try on the crown and robe. Doudrop says she isn’t afraid of Baszler, because even though she’s the most dangerous woman on Raw, she’s also an insecure bully. To my surprise, she backs that up and pulls off the upset, meaning she’s just one step away from becoming Queen Doudrop. Alrighty then, good on you.

Nikki A.S.H. and Rhea Ripley wish Belair good luck and welcome her to Raw, and she promises to give Flair the proper farewell tonight.

This is another stay busy match for Balor, who will face the man who comes out to watch from the stage, Woods, on Thursday at Crown Jewel. Balor makes short work of Mace, then goes to stare down and exchange a few pleasantries with Woods.

Kofi steps between Xavier and Finn, trying to play peacemaker. No punches are thrown, so I’d call his efforts a success.

Rick Boogs is on a magical journey to locate his chi, confusing the heck out of the Viking Raiders.

There are a lot of subplots to this. Belair is trying to regain some gold after her brief reign earlier this year, and enter Crown Jewel with a shot at winning both titles. Charlotte is on her way out of Raw, so one would think she wouldn’t leave with the belt … but maybe that’s what WWE wants us to think. Flair executes a really nice looking spot where she hits a standing moonsault after Belair rolls away from her top rope moonsault. We’re going two commercial breaks for this one, which stinks, but at least means they’re getting enough time to have a great match. Both women are laying it all out there now, which is exactly what you’d expect from them. Near fall for near fall they go, and we’re going past 11 to boot. It’s deserved for the effort they’re giving … but the WWE figures out a way to give us a bummer of an ending. In an act of desperation, Flair grabs a chair from beneath the ring, getting disqualified as the ref spots her using it. Belair gets a measure of revenge by snatching the chair and using it in her own right, but her championship aspirations are up in smoke.

The show ends abruptly as it is has run over time. Dale will still be on vacation next week, but someone else will be here in his place, so we’ll see you in seven!

Three hours of Raw feels like three hours once you’ve been accustomed to two hours on other wrestling shows, but this wasn’t bad at all for a PPV setup show. The underdog runs in the tournaments and the RK-Bro-Street Profits match were all entertaining, and the main event was excellent until the finish, which seems like something we say too often when it comes to WWE cards. And while Crown Jewel is certainly the subject of plenty of discourse, it’s hard to argue that the card isn’t loaded.