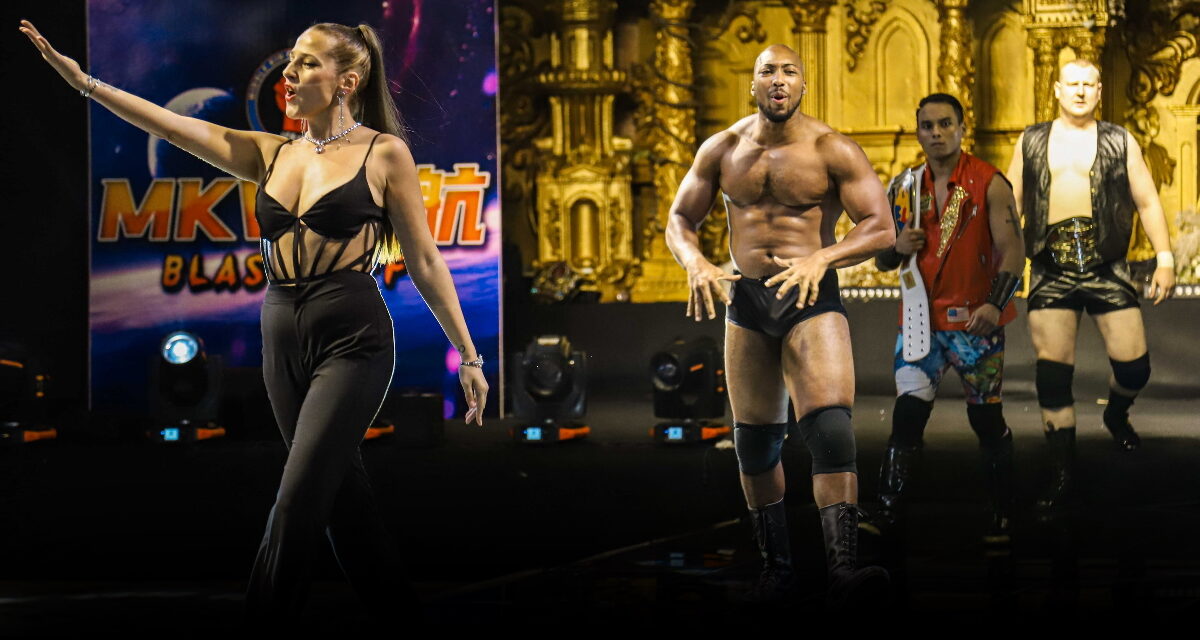 The season premiere of Middle Kingdom Wrestling opens with a look back at the Blast-off special — specifically Black Mamba’s violent turn on his former partner Bamboo crusher at the event after a loss for the team. We then join him backstage with interviewer Jim Say, saying that he betrayed Bamboo Crusher because he’s not good enough. Black Mamba is upset that he hasn’t won a championship in MKW in over three years and says from now on, it’s all about him.

After a full recap of the special the first match begins.

Mamba’s grim and aggressive new attitude is evident from his entrance onward as he jumps PHX (a play on “phoenix”) during his entrance starting the match.

Mamba is relentless in his attack on Phoenix until a shoulder block by PHX changes the momentum. Before PHX can really get going, Mamba jaw breakers him to gain control again. Mamba methodically implements dirty tactics focused on the arm while in control.

PHX comes back with clotheslines after Mamba wastes too much time while going for a leg drop he misses. PHX scores a near fall with a DDT all the while showing the effects of the attack on his arm. 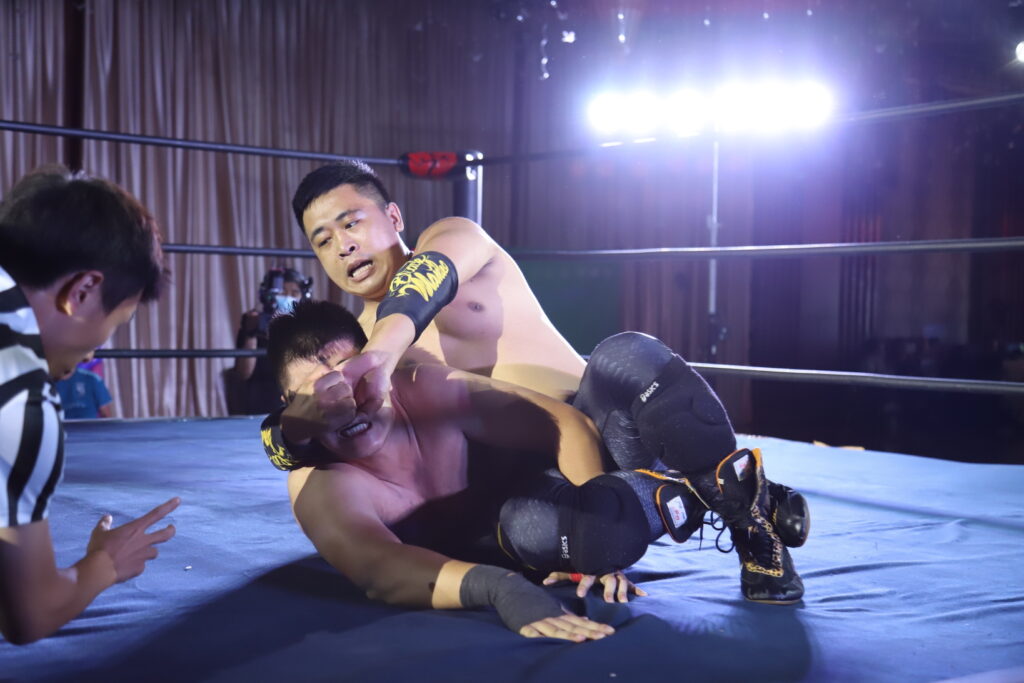 Black Mamba hooks in his crippler crossface on PHX.

A double line evens things out and Mamba comes out on top after a chop exchange. Mamba double stomps the arm and applies his crippler crossface for a tap out victory.

After the match Mamba attacks PHX with a kendo stick much in the same way he did Bamboo Crusher last time.

A clip reminds us that when we last saw Steve he walked out on his opponent and former pupil Chen.

The match erupts unceremoniously in a brawl as the two teams trash talk each other in the ring. Most of the action spills to the outside conveniently leaving Ash and Tao in the ring. The illegal men get to their corners and Ash puts an end to Tao’s high flying offense with his powerful offense. 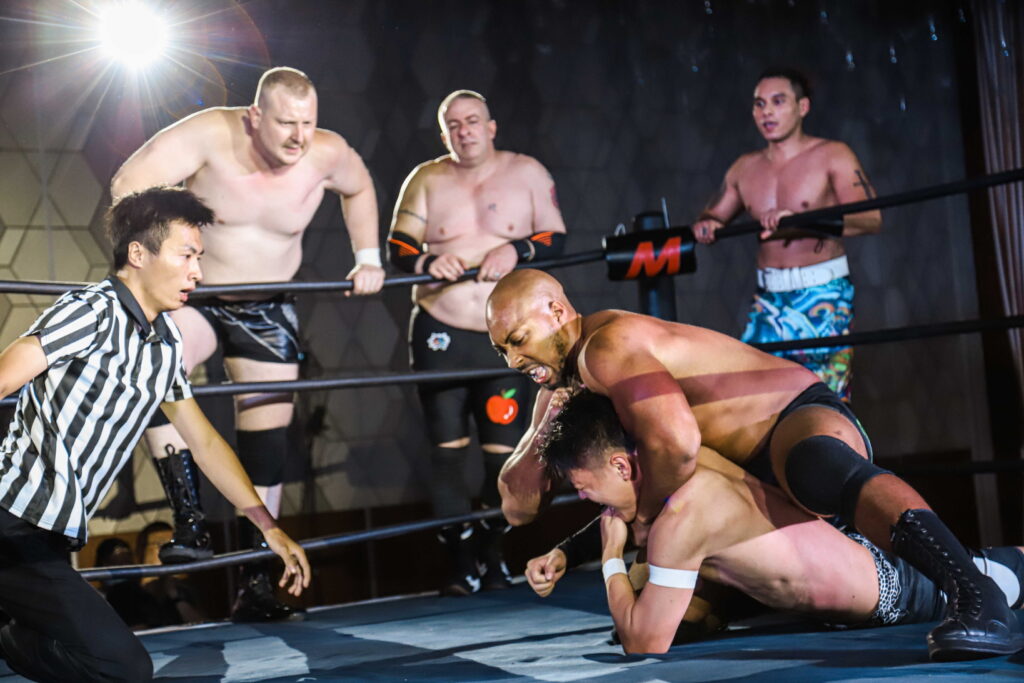 Uncle Money close to his team’s corner as he chokes Wang Tao.

Steve’s team gets to punish Tao to the point that Steve pulls Tao up from a potential three count several times while covering him.

Tao slips away when Sam takes too much time holding him over his head in a press tagging Buffa who unloads on all of the opposition. As the team begins to focus on Sam’s arm, he catches Chen literally and takes control.

Chen takes a thorough beating and finally escapes via a tornado DDT on Ash while set up in a corner. Wan enters and like Buffa attacks all his opponents, prompting them to enter the ring and starting another big brawl.

In the middle of the melee Wan jack knife pins Ash for the three.

Ray powders to the outside right after the opening bell as Voodoo intensely tries to lock up.

Voodoo offers Ray a free hold to his arm. Ray takes it but Voodoo displays ingenuity in being able to reverse. Voodoo continues to focus on the arm with a series of arm drags. Ray resorts to strikes and heads outside again but Voodoo follows him and attacks him while provoking the looming Johnny. Doing so however allows Ray to get the advantage when Voodoo eats the post.

Ray concentrates on the shoulder which took the brunt of the post as they reenter the ring. After a thorough beating, Voodoo answers back with a series of headbutts when Ray misses a rope rope attack including one from top. It and an enzugiri are each only enough for two counts. 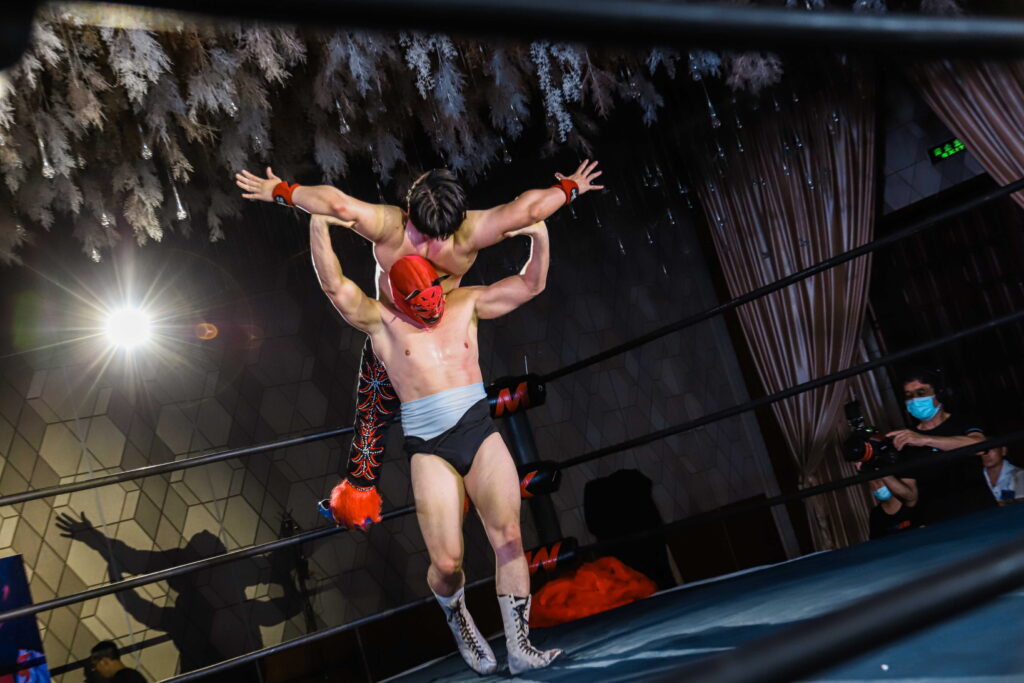 Voodoo hoists Cold Ray up high in a crucifix

Voodoo hits his famous thumb with the Jabba and then picks up and drops Ray with a big crucifix powerbomb for another two.

Ray counters a suplex attempt into a keylock with grapevine for the tap out victory.

This episode contained some of the best wrestling I’ve seen on Blast-off. The matches were more unique than usual and I wanted to see what would happen next as they played upon what has come before intelligently.