One streak continued as another one ended on night 17 of the G1 Climax Tournament.

Jeff Cobb extended his unbeaten streak to 8-0 by defeating the devious Evil in their match.

Cobb was rightly concerned from the get-go about Dick Togo’s presence at ringside. He motioned for the official to clear him from inside the ring so the match could get going. Evil rolled to the floor so Togo could leap up on the apron to act as a distraction. Evil attacks Cobb from behind as he has words with Togo.

A leap frog and a drop kick from Cobb has Evil flat on his back on the mat. Cobb picks Evil up only to knock him back down with a haymaker to the face. Cobb shrugs off Evil’s chops. He sends him down again with a head butt. Evil takes the fight to the floor where he slams Cobb into the ringside barrier. Togo distracts the official so that Evil can snag a steel chair from under the ring. Cobb gets laid out by Evil’s solo Conchairto.

Cobb slams Evil’s head repeatedly into the time keeper’s table. Cobb takes the bell hammer and places it into a stunned Evils hand. The crowd claps and laughs.

Evil has a new job with NJPW. Courtesy: NJPW.

In a really cool spot, Cobb picks up Togo by the neck, throws him hard into the ringside barrier. The barrier collides with the announce table knocking Evil over.

To keep his undefeated streak alive Cobb survives Togo’s garotte to super kick him in the head. Evil swings and misses with a steel chair. Cobb kicks it into Evil’s head. A German Suplex and a Tour of the Islands pins Evil.

Bushi scores the win for his team with a Boston crab. 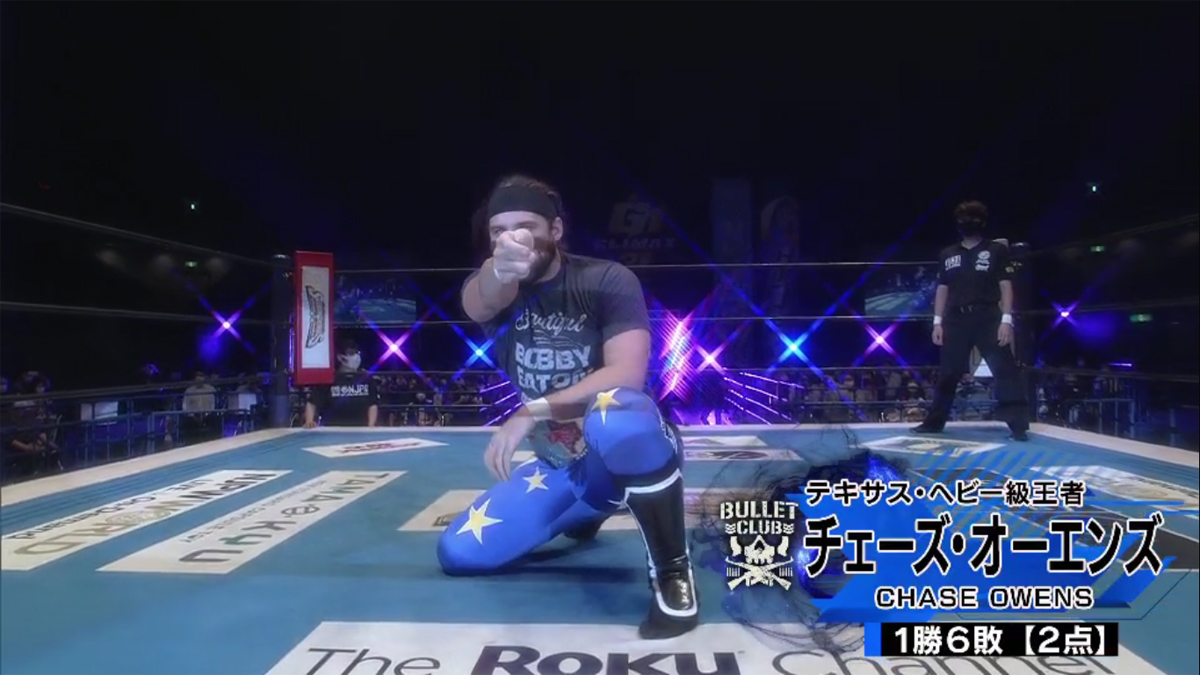 Chase Owens comes to the ring with a Bobby Eaton tribute shirt on and gear. Taichi has heavily taped ribs. Chase Owens wants to begin the match sumo style. After a lot of stalling, Taichi shoves Owens out of the ring. Owens has Taichi down with kicks to those injured ribs. He demands Taichi’s valet Miho Abe kiss him on the cheek or he will kick Taichi’s ribs in. She refuses over and over so Owens caves in Taichi’s ribs over and over. Chase pays tribute to Bobby Eaton with an Alabama Jam leg drop from the top rope and a Package Piledriver for the win.

Sanada scores a win with a bridging pin.