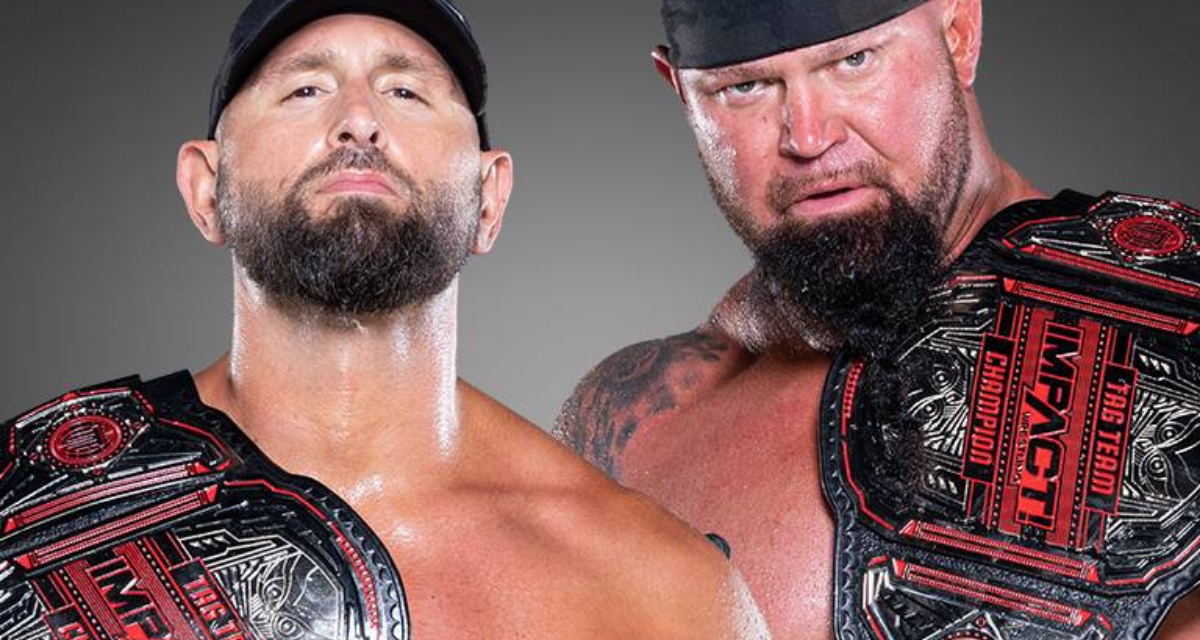 During a recent Impact Wrestling Press Pass conference call, the Good Brothers, Luke Gallows and Karl Anderson, used the word “confident” numerous times — and why not? They are the Impact tag team champions, in demand around the world, and, heading into Bound For Glory, are all business … in the ring at least.

The actual call was closer to their real personalities, funny and light when talking, serious when it comes to what they do in the ring and their reputations.

“One issue that the Good Brother and I have never had is a lack of confidence and whether we win a match or whether we lose a match, we know that we’re going to bounce back,” said Anderson. “Walking into Bound For Glory, I feel like we’ve cemented what we came to Impact Wrestling to do. And at Bound For Glory, we’re just going to continue doing what the Good Brothers do and that’s, no matter what, make headlines.”

When the press call, hosted by D’Lo Brown went down, on October 13, the Good Brothers didn’t know who they will be defending their titles against at Bound For Glory, on October 23, 2021, at Sam’s Town Live, at Sam’s Town casino, in Las Vegas.

Gallows said they were ready for anyone.

“I would say that Machine Gun and I are used to being marked men. Now the proverbial Forbidden Door has been not only opened but kicked down in Impact Wrestling — I mean we’ve got teams from New Japan and Bullet Club and FinJuice. We’ve got Impact teams gunning for us, of course. We’ve got teams over at AEW looking to cross, gunning for us,” said Gallows. “But we’re totally prepared. It’s that same old recipe, we say it on Impact Wrestling every single week, it’s a Magic Killer, a 1-2-3, and it’s just too sweet. It’s been working for years, it’s gonna work at Bound For Glory.”

Anderson and Gallows have been around the world as champions, from New Japan Pro Wrestling to WWE, and Gallows said they are in a very good headspace at the moment.

“We can both say that we’re probably as professionally happy as we’ve ever been, because Impact’s given us the opportunity to not only wave the Impact flag at Impact Wrestling …  [we] wanted to wave that flag around the world. And we’re doing it, I think we’re doing it well,” said Gallows. “When the world fully opens up, from the pandemic stuff, we’re going to be doing it even more. There’s nowhere that we won’t go and defend these Impact Wrestling World Tag Team Titles. Again, back to being confident, we’re very proud men, and I think that we have a lot to be proud of, but a hell of a lot more to do so that we can keep that up.”

The likely challengers for the Impact titles at Bound For Glory are either FinJuice — David Finlay and Juice Robinson — or Bullet Club with Hikuleo and Chris Bey.

Gallows gave some thought to both teams.

“There’s a lot of history between both teams, and the Good Brothers because when we were on top of the world in New Japan Pro Wrestling at the height of the Bullet Club era, when we were winning tournaments and winning the IWGP tag team titles numerous times, both David Finlay and Juice Robinson were ‘young boys’. They were seconding to the ring, they’re out there on one knee watching us do our thing. So I think they learned a lot from watching us. And then when we were away from that for a while, watching them grow into themselves was really cool. They’re a really talented team,” Gallows conceded, moving on to the next potential foes.

“Then you look at the Bullet Club and we are Bullet Club — we’re the reason that there is a Bullet Club. Hikuleo is the blood brother of Tama Tonga, the biggest man of that lineage ever to come down the pike. So that’s a dangerous duo there,” said Gallows. “So the lesser of two evils, I’m not sure which one it is. I don’t know what’s going to happen. But I know that Machine Gun and I will have a game plan, and I definitely hope to see a Gun Stun and a Magic Killer be the finish at Bound For Glory.

Anderson said to bring ’em on. “We’re prepared for both, we’re prepared for anybody — at anytime, anyplace. It sounds cliché, but we’ve been doing this for a long, long time. We’re not scared of anybody. We’re not fearing anybody ever, anywhere in the world. So at Bound For Glory, whoever’s there, whoever it ends up being, it’s just another team that’s in our way for us to show that we’re the greatest tag team to ever step into a professional wrestling ring anywhere in the world, for any company ever.”