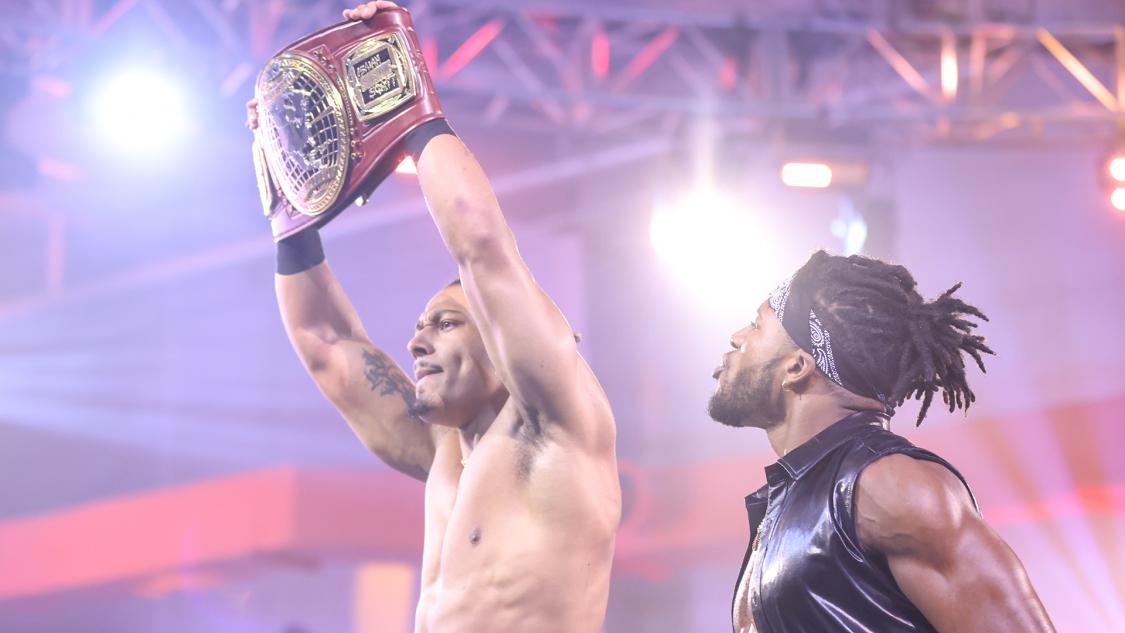 We are a few weeks into the NXT 2.0 era and I’m not sold on it. The new set looks like something straight off of the Universal Studios Orlando soundstage in the 1990’s. The roster was gutted of talent, and that was before the WWE draft. And it seems most of the storylines are being cribbed from the Attitude Era. Maybe I’m being to harsh; it’s time to enter the CWC.

Joe Gacy is in his safe space in the ring, saying he represents all of us snowflakes. He is going to insert himself into the NXT championship match at Halloween Havoc. He’s doing this for us people!

The NXT crowd does not like Gacy’s chances in this match.  Gunner Harland is in the crowd, just staring daggers at Gacy. Ciampa beats Gacy down in the corner and delivers a running knee. Ciampa dominates the match Gacy gets a bit of offense in, but Ciampa eventually puts him away. Tommaso hits the Fairy Tale ending to get the pin.

After the match, Harland runs in, attacking Ciampa on the ramp. Gacy tries to talk Harland down, but get grabbed by the throat. He release Gacy and runs off. Ciampa shoves Gacy to the floor.

Toxic Attraction makes their way to the ring. Seems they want to become the female version of the Undisputed Era by capturing all the gold in NXT.  My word; not theirs.

Someone is coming to bury the past at Halloween Havoc.

Xyon is undefeated in NXT 2.0. He pretty much dominates Blade. He sets Blade up, nailing him with a flying forearm. He covers for the win.

McKenzie Mitchell asks Tommaso Ciampa about taking on Bron Breaker at Halloween Havoc. He says it has a big gight feel. The Grizzled Young Veterans crash the interview. They can’t wait for him to lose. Bron Breaker of all people comes to help. He is willing to stand by Tommaso’s side until their match. He wants Ciampa at his best.

Swerve Scott is with Mitchell. He knows the rest of Hit Row will be fine and they would want him focused on his match with Santos Escobar. He’s taking that title with him to Smackdown, and Escobar can’t do a thing about it.

This is Ivy’s debut. Feroz connects with a drop kick, but gets caught on a cross body. Nile holds her in a vertical suplex before dropping her to the mat. Nile gets Valentine in a torture rack and does some squats to show off. Feroz taps out.

After the match, Malcom Bivens wants everyone to know that Ivy has put the Women’s division on notice. The Creed brothers aren’t messing around either. They are putting the tag team division on notice. While Roderick Strong is all ready dominating as the Cruiserweight champion.

Creed with a gut wrench suplex as we join the match in progress. He follows with a front face lock suplex. Creed rubs the sole of his shoe in Jiro’s face before slamming him again. Jiro responds with strikes and a clothesline takes down Creed. He goes to the top rope and does a headstand on the top turnbuckle before dropping a Vader Bomb. Jiro gets caught springing off the top rope. He slams Jiro and follows with a clothesline. Creed covers and gets the pin.

After the match, Diamond Mine puts the boots to Jiro. Kushida runs down to the make the save, but stops short at hitting Ivy. This allows Diamond Mine to regroup and beat him down.

Raquel Gonzalez won’t duck anyone. She challenges Mandy Rose to make their match at Halloween Havoc a “Spin the Wheel and Make the Deal” match.

It’s the first episode of Lashing Out with Lash Legend. It’s just her cracking jokes about the happenings in WWE.

Dunne comes out firing on Wagner, who weathers the flurry of strikes. Wagner then fights off a submission from Dunne. The fights spills to the floor where Holland gets whipped into the ring steps. O’Reilly gets cut off in the ring, but Wagner is able to save his partner from eating the ring steps. Back in the ring, Wagner starts throwing hands, taking on Dunne and Holland. O’Reilly takes on Dunne with a suicide dive. Wagner hits Holland with a twisting butterfly suplex and covers to get the win.

It’s time for our lesson at Chase University. He wants to show that Odyssey Jones doesn’t have the veteran awareness.

Tony D’Angelo is a walking stereotype of Italian Americans. I said it, and I’m standing by it. He isn’t pleased he didn’t get on Lash’s show, but he plays it off. And he has someone locked in the trunk of his car.

Grayson Waller is a former gold gloves boxer, while Hudson is a poker player. I have a feeling Hudson is holding a dead hand. Waller is all over Hudson hitting a stunner. Hudson kicks out of the pin. Waller goes for a springbaord, but Hudson kicks the ropes. Waller crashes to the mat and Hudson rolls him up. He gets the pin with a handful of tights. Looks like Hudson sucked out a win on the river.

Imperium is embarrassed that MSK are the tag team champs.

Indi Hartwell and Persia Pirotta vs. Sarray and Amari Miller

Persia wants Indi to keep her wedding ring on. Remember was Sarray was the next big thing in the women’s division. Now she’s stuck in a random tag team. And she’s eating pins. Persia with a sit out gourd buster and then Indi drops an elbow and covers. She gets the pin on Sarray.

After the match, Persia suggests they go after the tag team championships. Io Shirai and Zoey Stark have something to say about that. And since they come out, Gigi Dolan and Jacy Jayne have to show up. They want the title, too. All six women start to brawl. The tag team champs end up clearing the ring and standing tall.

Escobar tells the rest of the Legado el Phantasma that he has this and wants them to head to the back. Swerve immediately attacks Santos on the ramp and whips him into the ring steps. He rolls Escobar into the ring. The ref rings the bell.

Escobar rolls the floor and Swerve takes him out by flipping over the top rope. Scott rips the pad off the back of the turnbuckle before getting back in the ring. He hits a tilt-a-whirl back breaker and then drops a knee. Escobar blocks the JML driver and then snap mares Scott out of the ring. Escobar trips Swerve on the apron and takes him out with a suicide dive.

In the ring, Escobar with a bow and arrow. He follows with a spine buster and kicks Scott in the back. The two trade blows in the middle of the ring. Escobar starts laying into Swerve with punches, but Scott is able to switch positions and answer with a clothesline. He goes up top and lands an uppercut. Swerve rolls into a flatliner, though. Santos with a double knee strike and then a Frankensteiner off the top. Escobar goes high risk and connects with the frog splash. Scott kicks out at two.

Escobar pulls Scott over the exposed steel, but Scott knocks him off the top rope. He delivers a Death Valley Driver on the apron. Scott goes up top and looks for the 450 splash, but Escobar gets his knees up to block. Joaquin Wilde and Raul Mendoza run down and jump on the apron, but they are stopped by Carmelo Hayes and Trick Williams.

Escobar connects with a jumping knee and charges Swerve in the corner. Scott is able to knock Santos into the exposed part of the turnbuckle. He hits the JML driver and covers to get the win.

Hayes lifts Scott’s arm in victory and then lays him out with a clothesline. He asks Williams for the contract he won at the Break Out tournament and signs it.

Hayes connects with a springboard clothesline, but can’t get the three count. Scott with a punch and Hayes is knocked down. Carmelo with a big kick and goes up top. Hayes with a flying leg drop and covers. He gets the three count and the win.

The main event and then the surprise title change after said main event saved the show. Isiah “Swerve” Scott put on a great match with Santos Escobar before leaving for Smackdown with Hit Row. Other than that, the new NXT just isn’t doing it for me. Nothing else on this show is must watch.