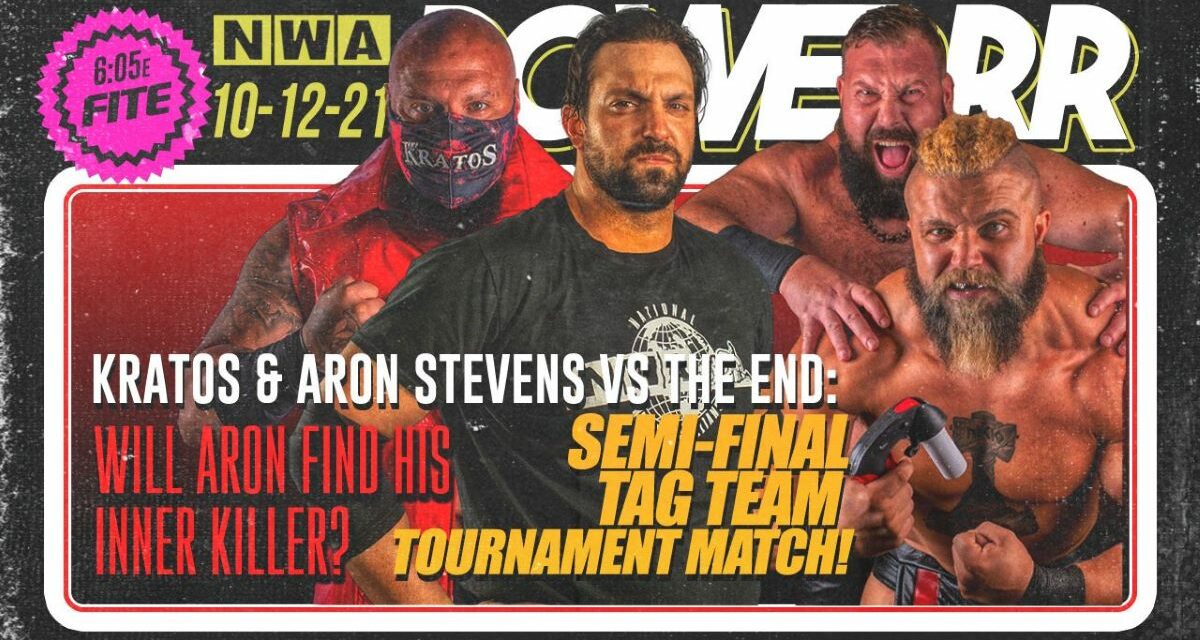 Television title matches, tag teams in turmoil, and tons of talking are on tap when you step Into The Fire at The Chase Park Plaza in downtown St. Louis, MO.  Your commentators Joe Galli, Velvet Sky, and…waitasec, it’s your NWA Heavyweight Champion, Trevor Murdoch at the commentators booth tonight.  Tim Storm is away “on assignment,” be we’re narrowing down to the tag teams that will face La Rebelion for the gold.  So let’s send it to the ring, as the match is underway with the… 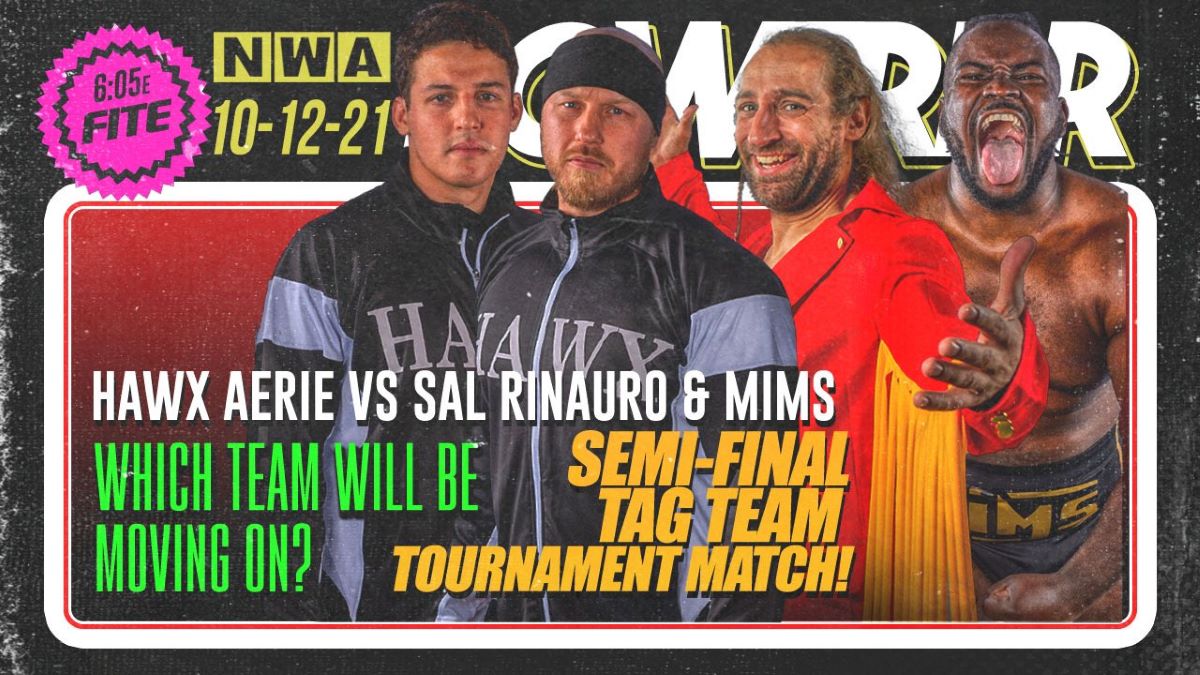 It’s Mims and Luke Hawx start, and fans chant loudly for “Hawx!”  Papa Hawx has the advantage with a shoulder tackle to Mims, and then PJ tags in.  Mims gets the tag, and now Sal enters, and Your Mega Pal Sal tries to get pin, but no luck.  PJ has youth and speed, but Sal has the veteran moves.  PJ tries to rolls up Sal, but cover for a two count.  PJ shows signs of frustration, but Luke says for his son to calm down.

Danny Deals tries to get up to the ring to interfere, but PJ wises up to his antics, and gets his dad back in the match.  Sal takes it to Papa Hawx with a crossbody, but he catches Sal and transitions to a back breaker to shoulder breaker to powerslam to cover for a two count.  Now Hawx Aerie start their double team dynamics with a double back breaker, and PJ takes over but Sal manages to reverse to a front face slam to the mat.  Sal gets the tag to Mims, and he catches PJ in a bear hug, and then he tags in his Big Strong Pal, and they have tag team moves with Mims for a slam and Sal with a leg drop to cover, but Luke breaks up the count.  Sal gets in a nice cravat hold to PJ to avoid him tagging his dad, and then Sal goes to springboard elbow, but it’s reversed to a slam.  Sal tags in to Mims, but PJ nails him with a leg lariat to send him out the ring.  Sal is still in and PJ gets a single leg crab with a heel hook to Sal, and he has no choice but to tap out.

Your Winners, and moving on in the Tag Team Tournament:  Hawx Aerie

We go to Kyle Davis, who’s on a closed set with Da Pope recorded earlier today, and he had some words for the holder of the Ten Pounds of Gold, Trevor Murdoch.  As Davis gives him the floor, Pope says in his pimpin’ style:

“No, thank you Kyle.  You know, normally I’d come out here and I’ll go, “Textile Kyle!” But we’re in a different moment in time right now. A lot of people have been asking, a lot of people have been wondering, exactly when is Pope gonna cash in on his opportunity that sits in his back pocket. Let me be clear about something Kyle; Pope has so much respect for Trevor Murdoch. I want you to understand that when Trevor Murdock succeeded at NWA 73 on becoming the World’s Heavyweight Champion, Pope was waiting backstage to greet him. Pope put his arms around him and told him that I love him, and in return he said the same thing.

“You know why?  Because me and Trevor, we go back.  We traveled the roads together, we have labored in this industry together.  Trevor Murdoch’s son came up Da Pope, tears all in his eyes.  I took that young man, put his head on my shoulder, because it’s a great moment in time, and I’m happy for Trevor. But, again, let Pope be clear. While I respect Trevor, I respect the hell out of the National Wrestling Alliance. I respect the Ten Pounds of Gold, and obviously, at some point Pope’s gonna cash in that direct deposit that I talked about earlier. But for now, I celebrate my brother. I want him to have his moment.  When Pope makes his move, it won’t be underhanded, it won’t be at a spur of the moment. Trevor’s going to know, the world is going to know, and then we’re all going to meet up at that glorious moment in time together. So Trevor, enjoy your run my friend.  Enjoy your ride.”

So…yeah.  That happened.  Didn’t say much different, but it was a cool promo.  Guess we’ll wait to see. 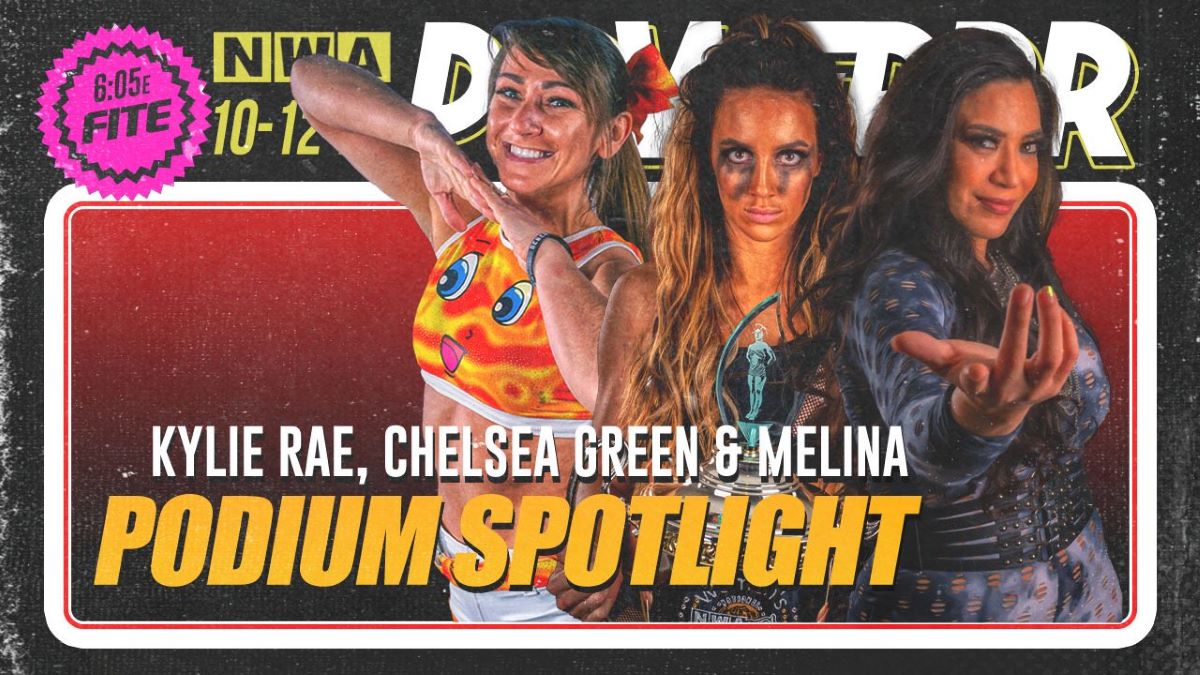 Back at The Podium with Kyle Davis are Kylie Rae, Melina, and Chelsea Green. Green hijacks the mic, and asks what have they ever done, she’s the winner and all this and that.  Folks, I’m here to tell you that sometimes to need to let crazy be. Davis gets the mic back, and talks to Melina.  She wants to step up and take a shot at Kamille and “The Burke”, and so does Kylie Rae.  She thinks she could be just as good as Melina and be up for the chance at “the Burke” and Greene screeches “Noooo!” and we take a well-deserved break.

And now for something different (and I use the term accurately), here’s your title match for the… 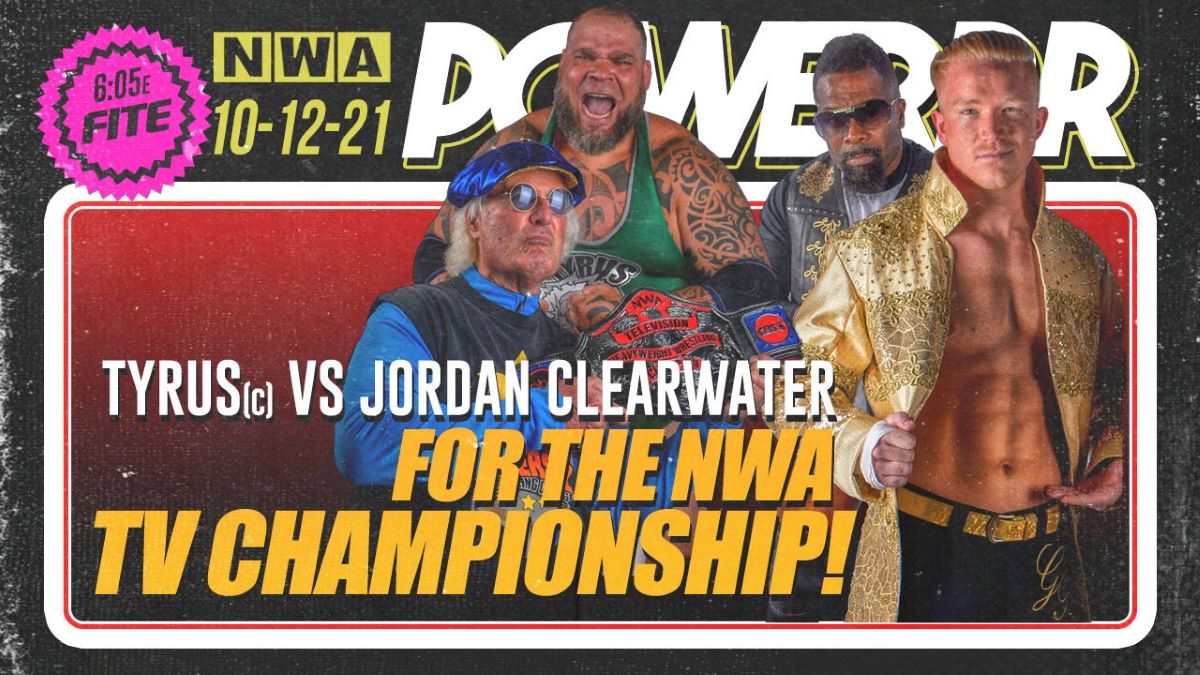 This is the second defense for Tyrus, and he faces a fellow Idol Mania cohort.  Even with Kyle Davis giving boxing-style intros, you can tell this is a squash match.  But it’s unique in that it is a hell versus heel match.  I’m not big on Squash matches, but heel matches are interesting in a train wreck sort of way.  As the 6:05 time limit starts, the clock winds down at all of Idol Mania mill around, and they literally are running out clock.  Galli offered fans to take a time out and try their sponsor, Busch Beer (thanks, but I’m a mescal man, Joe).

At 3:30 left in the match, Clearwater *finally* goes on the attack, and hits his Midas Touch big boot twice, but it dazes the big man.  Clearwater nails a third Midas Touch and covers for a two count.  He tries again, then a gets a one count.  Clearwater tries a Figure Four leg lock, and actually does get it locked in, and Tyrus reaches for ropes.  Now Tyrus gets mad, and smashes the Golden Boy, and one heart punch is enough for the three count.  ‘Nuff Said!

BLK Jeez carries Clearwater out, and now Tyrus and Austin Idol are with May Valentine at The Podium.  She says the match was weird (which is putting it mildly). Tyrus acknowledges it was weird, because he had to go to a weird place to defend his belt.  Tyrus addresses Cyon, and says that if he did that to his stablemate, what will he do to the masked man? He then goes for the cheap heat in the crowd, saying, “I thought ‘Deliverance’ is your favorite Disney movie in Missouri.”  (Not gonna lie, I chuckled at that.) But Tyrus makes it clear he’ll be ready for Cyon on December 4th at Hard Times 2. 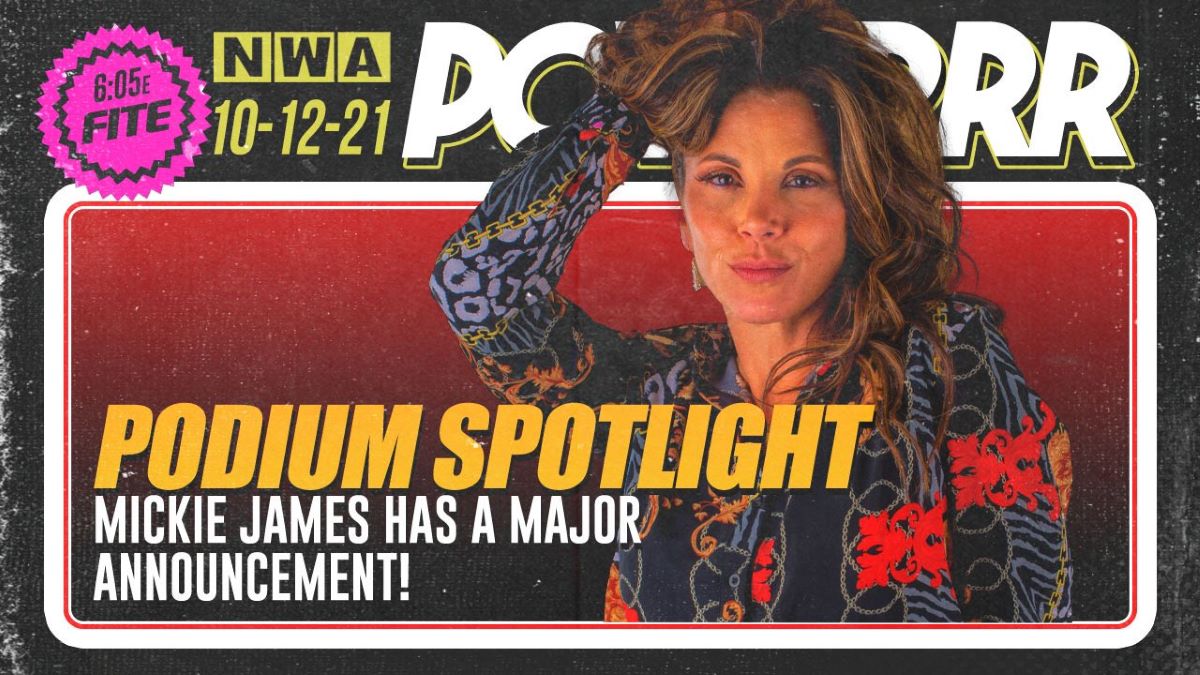 We go back to Kyle Davis, and here’s Mickie James with an announcement that the NWA will have an EMPOWERRR series that’s on par with NWA POWERRR. As she gets excited for what that show will do to highlight up-and-coming talent in the women’s division, out comes Kiera Hogan.  She wants to apologize for her actions, and wonders why she’s not on the EMPOWERRR show. James says that she’s not here to put her down, and she thinks highly of Hogan.  Hogan says she wants to step in the ring.  Why not with Mickie James, she wonders.  She ducking her, she asks aloud to the “oohs” of the fans. James wants a conversation about this in back right now.  Oh, to be a fly on the wall. 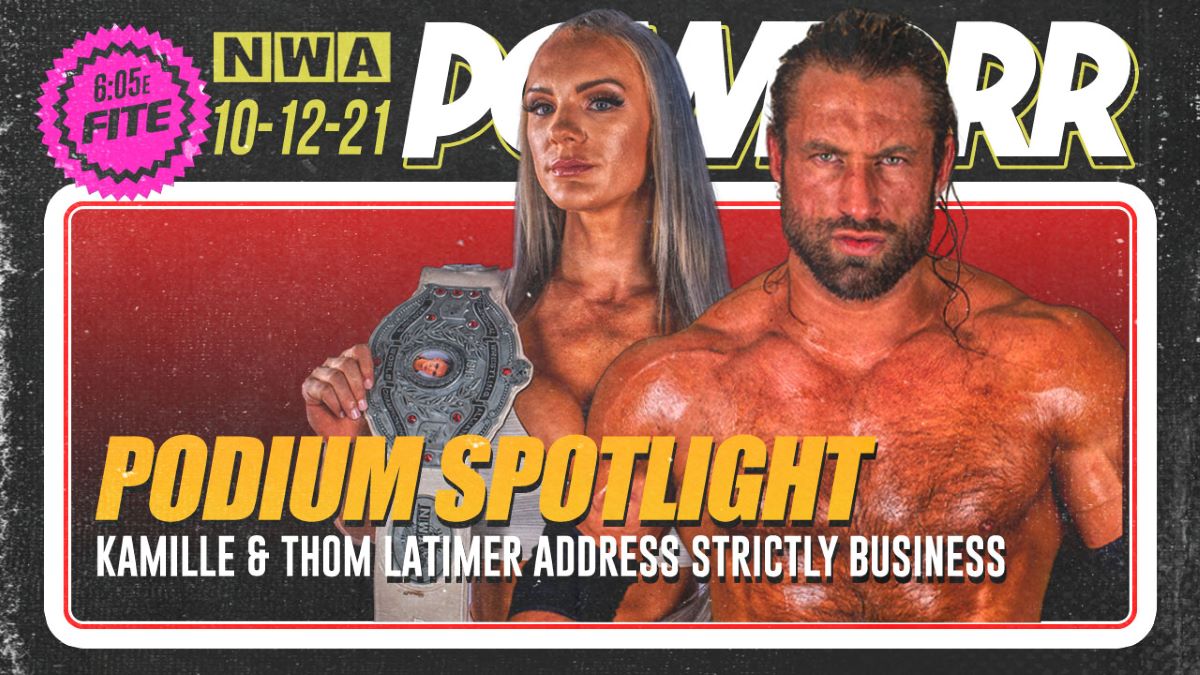 Back to The Podium with Thom Latimer and Kamille. Latimer commandeers the mic and address Nick Aldis.  They’ve been friends for years, he says, but it feels like he’s been used as a stepping stone.  While Aldis, got the title opportunities, the suits, he got leftovers, in so many words. Now he needs Aldis to think why he did this. “You lost your edge,” says Latimer, and he then brings his son Dominic in the mix, saying that Aldis should address why “Uncle Thom” decided to hurt him, and how he’s going to do it again. 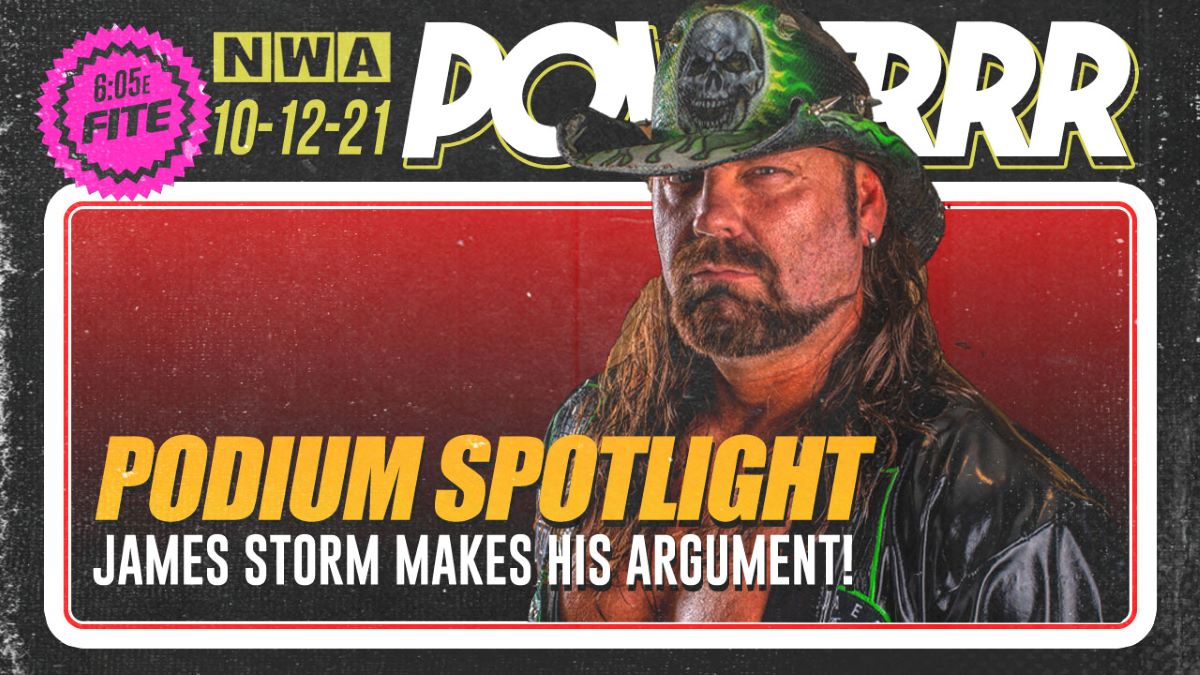 As Latimer and Kamille leave, James Storm walks by, drops a beer on The Podium, and states he wants to be the NWA National Champion again.  He knows there’s other in front, and he’s got some obstacles.  But when he gets his hands on Chris Adonis, and when he hits him hard he says to the Missouri faithful that you’ll hear those five words…”Sorry about your damn luck!”

Speaking of luck, Aron Steven seems to be down on his, and he needs all the help possible for his team to advance in the the…

Stevens is showing signs of trepidation, according to Galli, and it doesn’t get any better as The End work on Stevens, and send Kratos out of the ring before the bell starts.  The referee finally gets control, and rings the bell, and Parrow wears down Stevens, and tags in OdinSon for a corner running European uppercut, followed by a belly to belly suplex to cover for a two count.  The End is dominating throughout, and Stevens has not been able to get any offense in.  Stevens manages a desperation tag, and Kratos measures Parrow. Lotta beef in this match, according to Galli.  A forearm shiver and a powerslam by Kratos is enough for him to cover Parrow for one, two…no.

Your Winners, and moving on in the Tag Team Tournament:  The End

As The End celebrate their victory, as they advance to face Hawx Aerie, Kratos is absolutely livid, and yells at Stevens “What the hell was that?”  He shoves his partner in frustration, as the show goes to credits.

This is an angle driven episode, and it serves it’s purpose.  All the parts moved forward, from the tag matches to the Television title.  There was a lot of talking involved, but it did the job as well.  Some of the interviews could have been left out, but the ones that hit home were the ones by Thom Latimer and Mickie James.  It definite starts to lay the fooundation for what we can see in the weeks ahead for their next pay-per-view, which is a few months away.

Until next week, see you in seven!