NXT: The tag team division is back 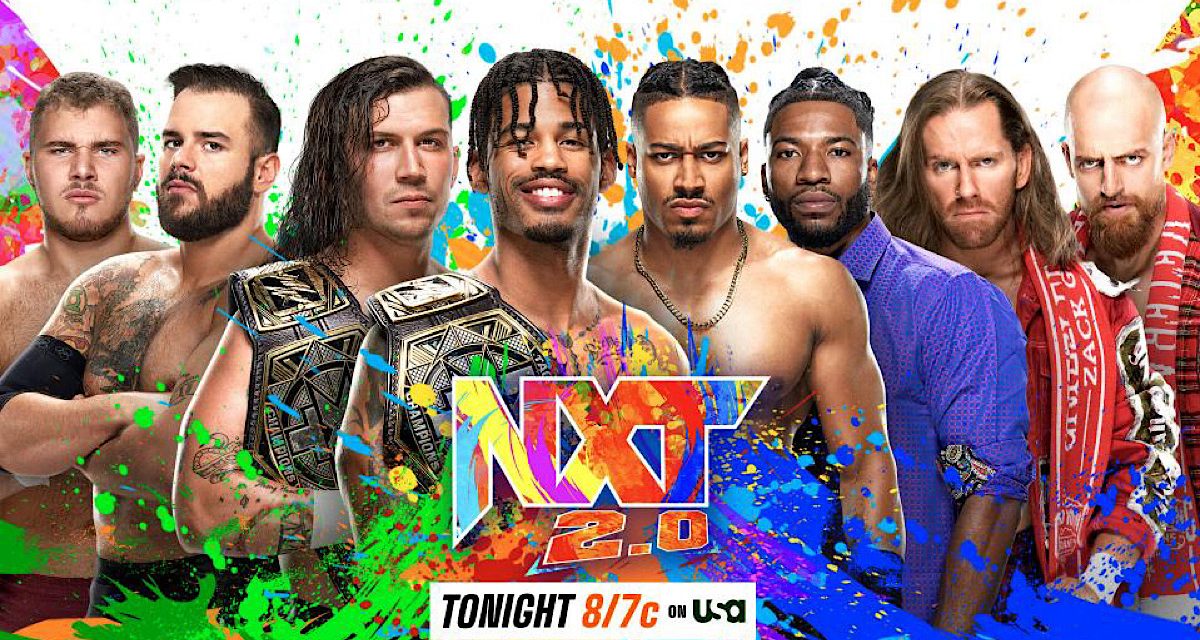 If anything about NXT needed a revamp, it was the fallen tag team division. But with new blood in competitors like Carmelo Hayes and Trick Williams and Josh Briggs and Brooks Jensen, the champions MSK could be spearheading the division’s revival. Speaking of new blood, NXT 2.0 continues to introduce its motley crew of hilariously cheesy characters like Tony D’Angelo, whose “so bad it’s good” aura encapsulates much of NXT’s new era.

Television openers are usually the attention-grabbers, but NXT likes to think differently. Rose has Gigi Dolin and Jacy Jayne of Toxic Attraction ringside as they climb the women’s division ranks, pushing out those like Moon, who displays a good fight. Putting it away though is Rose with an admittedly great-looking running knee for the clean pinfall victory.

Opener Odyssey has a nice ring; Jones’ infectious energy and physical charisma would’ve made for a fitting curtain jerk, but bygones are bygones in tonight’s second matchup. His intensity persists in-ring until Knight briefly turns the tide, but Jones’ size and power assists in a comeback. However, Chase University’s own Andre Chase provides a distraction to give Knight the surprise victory.

Backstage, Cameron Grimes is “on the search” to find himself “a lucky lady.” His prayers are answered when Pete Dunne appears. Actually, Dunne instead issues a one-on-one challenge for tonight.

Kyle O’Reilly talks to the illustrious Von Wagner in the locker room; O’Reilly appreciates Wagner’s help but ultimately tells him to stay away.

The NXT Champion Tommaso Ciampa is in-ring and inevitably confronted by breakout Bron Breakker. It’s simple, really; Ciampa versus Breakker for the NXT Championship at Halloween Havoc is set for October 26. And surely wherever General Manager William Regal is, he accepts too.

After Indi Hartwell shares some revealing information about husband Dexter Lumis, she accidentally walks in on Boa and Mei Ying performing a spell, mediating, or god knows what.

Jiro’s blazer finally faces worthy competition in Gacy’s button-up. “Style Strong” is over in Orlando as Jiro connects with a top-rope head scissors, but Gacy reverses the momentum with a handspring closeline. The victor consoles Jiro with a warm hug of inclusivity, acceptance, and what have you before eyeing an interesting figure in the audience.

A vignette for Duke Hudson sees the 6’’5” Aussie at a poker table. Wade Barrett explicitly says, “Duke Hudson is one sexy man. He gives a whole new meaning to stud poker.”

While Jade was originally scheduled to face Virginia Ferry, Monet blindsided the latter at ringside, and Robert Stone made the new matchup official. The actual rumor mill about backstage shifts of power was clearly in reference to General Manager William Regal! Monet connects with double knees as Jade’s boyfriend Trey Baxter appears in her corner. Monet attempts her finisher, but Jade rolls through to gain the pinfall victory. Who did the Mundo family upset?

Tommaso Ciampa’s backstage interview is interrupted too, as Joe Gacy mentions “toxic energy” and “privilege” coming from the champion. Ciampa offers a challenge: if Gacy defeats him next week, he’s added to the NXT Championship match at Halloween Havoc.

Holland of course is going to Smackdown while Grimes is going “to the moon.” Dunne’s career trajectory on the other hand is fuzzy. Dunne works down the opposition until a comeback is made, but the former recuperates with joint manipulation. As Holland attempts to interfere, Kyle O’Reilly makes the save, but Dunne delivers Bitter End to secure the victory. O’Reilly is taken out by Holland and Dunne with Von Wagner nowhere in sight.

Hit Row is in-studio, sending a message to Legado del Fantasma. They radiate swag, which hopefully translates onto Smackdown. Can’t be too positive.

D’Angelo, the Chicago mobster, is so stereotypical and cheesy that it’s hilarious; it must be deliberate. The audience is ironically behind him with persistent “Tony” chants throughout his unnecessarily long debut match. But D’Angelo displays his legitimate wrestling background, eventually gaining the pinfall victory. This guy is like a walking Family Guy cutaway gag.

Carmelo Hayes and Trick Williams are interviewed backstage, and yes, they’re still “bout it bout it.”

While the InDex saga has been ridiculous, everything about Mei Ying is another level of ridiculous. The NXT audience may or may not have been chanting “this is stupid,” but luckily, Hartwell puts it away with a springboard elbow. The thousand-year-old, mystical goddess’ weakness has been found: springboard elbows.

Lash Legend is met backstage by Tony D’Angelo, who invites himself onto next week’s segment. Legend says, “I just love him on that new Sopranos movie!” Now this, this is good stuff, pal!

A sweet vignette from Diamond Mine showcases each member individually: Hachiman, Ivy Nile, Julius and Brutus Creed, and the NXT Cruiserweight Champion Roderick Strong are introduced by the mouthpiece Malcolm Bivens. More of this, please!

The NXT Women’s Champion Raquel Gonzalez is interviewed in-ring about Toxic Attraction, and despite her inflection, it’s hard to invest in a championship feud with Mandy Rose. Speaking of which, for an extra amount of screentime, Toxic Attraction interrupts. They surround Gonzalez before the NXT Women’s Tag Team Champions Io Shirai and Zoey Stark make the save. Later on, Indi Hartwell and Persia Pirotta step up backstage.

Next week, Von Wagner and Kyle O’Reilly face Pete Dunne and Ridge Holland, whether O’Reilly “likes it or not.”

Tonight’s main event is conducted under elimination rules, and finally, the NXT tag team division has some oomph again. Notably, the dynamic duo of Hayes and Williams are most popular between the eight, according to the Orlando crowd. But the massive Briggs and Jensen take over, thereafter letting MSK capitalize with their finish. Hayes and Williams are eliminated to deserved jeers before commercial. MSK’s Nash Carter wins them back though with a fiery comeback, and Briggs and Jensen eliminate Zack Gibson of Grizzled Young Veterans. Some big hits and nearfalls later, MSK’s Wes Lee gets a roll-up to retain the championships.

The night isn’t over as Imperium, Marcel Barthel and Fabian Aichner, attack the champions. The good sports of Briggs and Jensen make the save as MSK stands tall.

MSK’s reign has lasted seemingly forever, but it’s never been more exciting than now. Along with an outstanding main event, for NXT 2.0 standards, the outlook on MSK is looking up with new challengers and situations at the ready. Regarding the remainder of the show, despite it’s eye-rolling flaws, the segments and matches were quick, making this an easy (and sometimes enjoyable) watch.