SmackDown: Day one of the draft 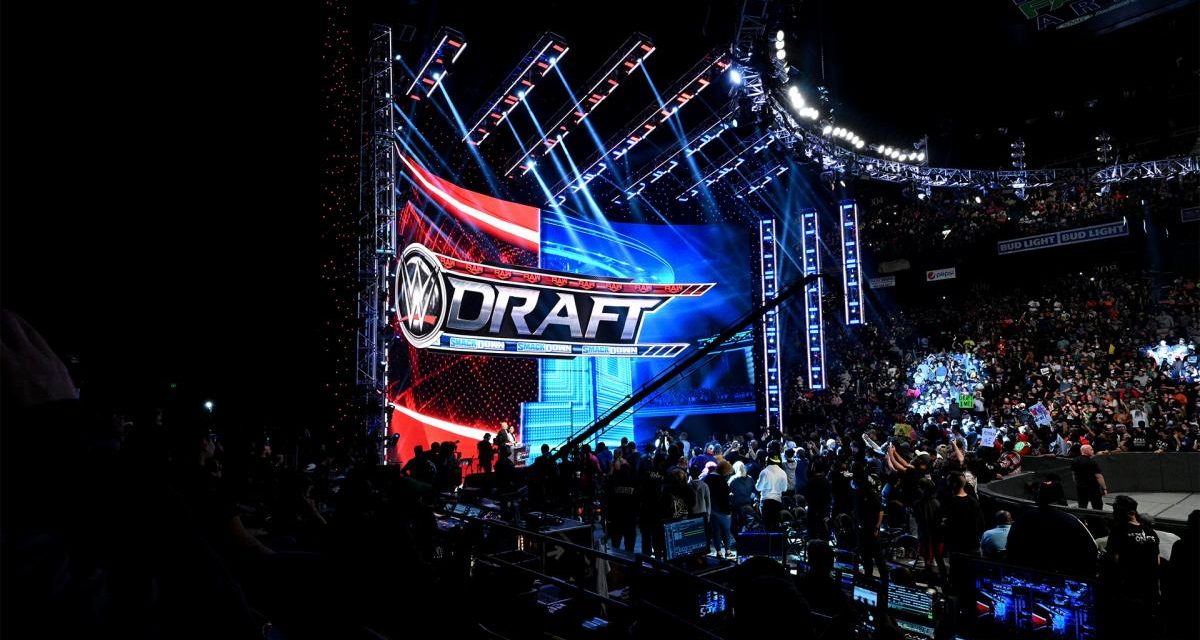 Baltimore hosts Day One of the increasingly meaningless WWE Draft. With wrestlers hopping back and forth between Raw and SmackDown whenever it fits the story, it hardly matters which show you’re tied to. Michael Cole tells us that the draft movements won’t take effect until three weeks from now, after Crown Jewel has wrapped up, so there won’t even be any exciting arrivals or departures throughout the show.

Sonya Deville and Adam Pearce come out to boos (presumably more for Deville), and the first pick is announced: SmackDown has Roman Reigns. So, let’s start things off with neither a bang, nor even a whisper. The draft opens with a non-event: Reigns stays on SmackDown. Pat McAfee stands up and gets excited over the “genius decision”.

The next selection is announced for Monday Night Raw: Big E Langston. “A tremendous pick” according to Cole. Next up in the champions’ roll call is Charlotte Flair coming to SmackDown, while Bianca Belair heads to Raw.

Time for some talk, as Roman Reigns enters the ring and acknowledges himself as the rightful number-one pick of the draft. Paul Heyman does his job of trying to sell the awful ending to the Reigns/Balor match from Extreme Rules. He reminds us that The Demon is now no longer undefeated (Heyman doesn’t count his loss against Samoa Joe, apparently), but points out that Reigns only looks forward and is ready for Brock Lesnar at Crown Jewel.

Well, Lesnar is ready for Reigns now and heads to the ring. A punch by Reigns leads to a suplex by Lesnar, and not even the Usos can help as Lesnar dismantles them quickly.  Reigns backs away up the ramp, leaving his cousins to a couple of F5s. 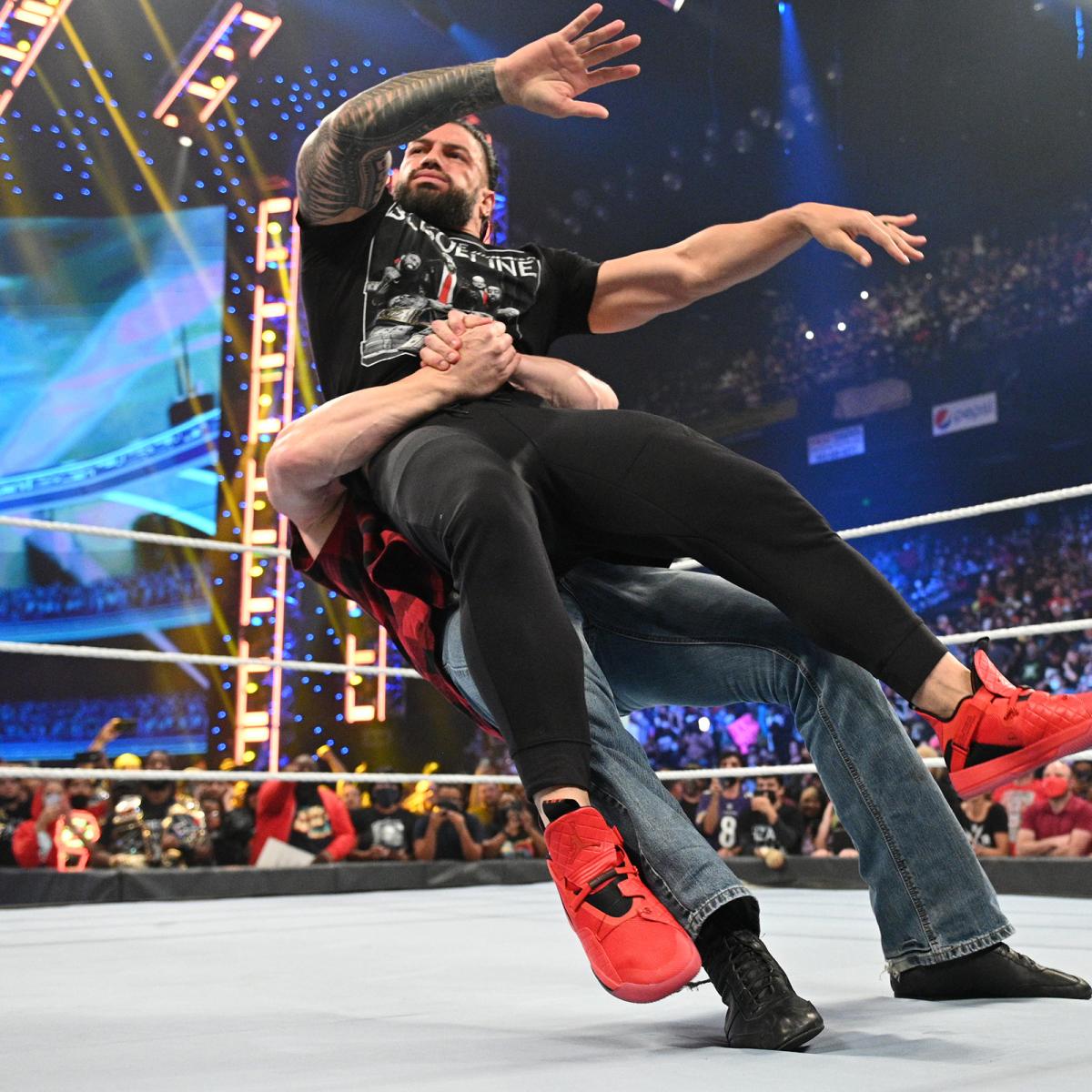 After the break, Kayla Braxton interviews Charlotte Flair, who simply has a few prideful things to say about herself before she “Whoo’s” away.

Owens opens the match in a hurry with a takedown and loads of boots to Corbin the corner. A tornado DDT leads to an early two-count, but after he misses an attempt at a stunner, Owens runs into a Deep Six by Corbin for another near fall.

Owens chops his way back into an advantage, superkicks Corbin to the mat and soon follows with a corner cannonball. Owens climbs the ropes, perhaps thinking of a frog splash, but Corbin rolls to the outside where Moss distracts Owens, allowing his buddy to deliver an End of Days — re-christened Happy Days by Cole — twice for the win.

The draft continues, as Deville and Pearce make these announcements: Drew McIntyre comes to SmackDown, while RK-Bro (Randy Orton and Riddle) stay on Raw. Next up, The New Day comes to SmackDown, to some hearty boos from the crowd. Maybe they’re upset that they’ve gone in the opposite direction to Langston once again? One more pick: Edge is going to Raw to bring his handful of matches per year to Monday Night.

Backstage again, Braxton talks to Drew McIntyre who has much more to say than Flair did. McIntyre is ready for Friday night, and feels like he has unfinished business after starting out on SmackDown all those years ago.

After the break, Edge takes control of the ring to air his thoughts. He acknowledges that SmackDown has always felt like his home, but he is looking forward to the new challenges of Raw. Before he leaves, though, he says he has to wrap up his story with Seth Rollins.

Rollins shows up on the screen, as he’s not here to see Edge face-to-face. Instead, he’s at Edge’s home. He knocks on the door, looking for Beth Phoenix. He enters the house with nobody home (but every light on?), helps himself to an apple and some orange juice. By the way, when Edge sees this, he runs out of the ring, and presumably is running straight from Baltimore to North Carolina. 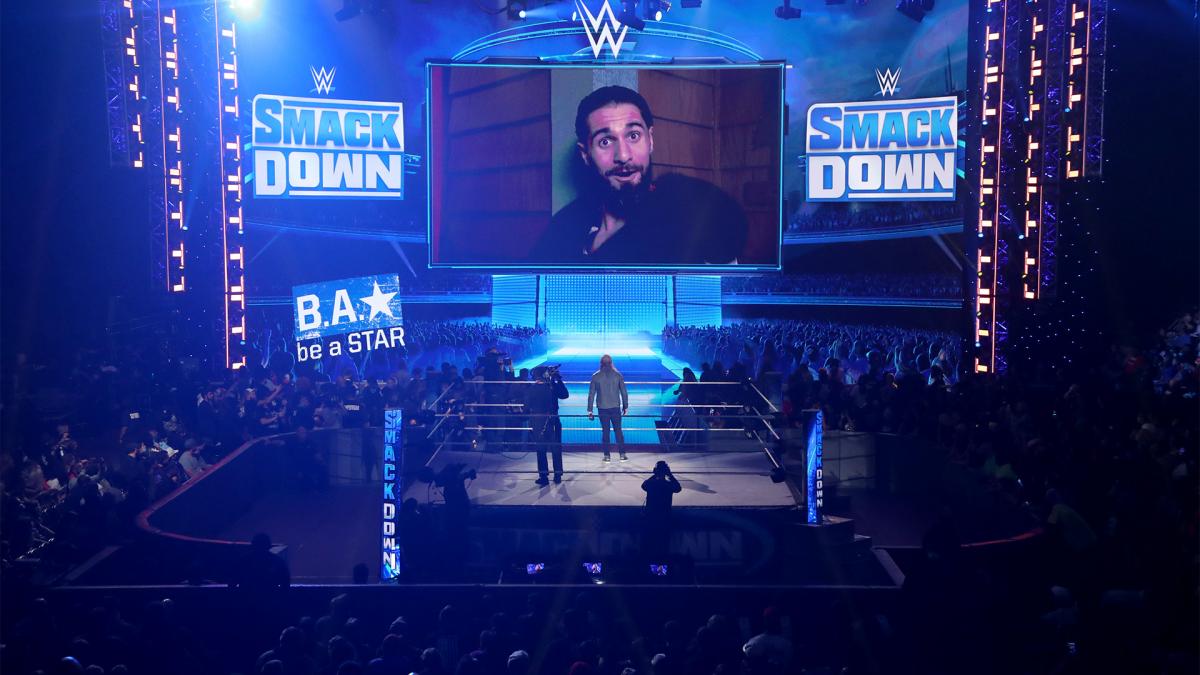 Remember, WWE fans: Be a STAR! Invade the homes of those you don’t like! Photo: WWE

Rollins rambles on for a while, hanging around and checking out the children’s artwork, while we find out that Edge was actually looking for a phone. He calls Beth and tells her not to go home. By the way: there’s oddly no further screen time for this story tonight.

One punch from Morgan, before the bell, mind you, sends Carmella to the floor to grab a mic and say that was Liv’s last chance to hurt Carmella’s “beautiful face”. She has some helpers apply a bejewelled mask to her face – though it’s a soft cloth and would therefore provide zero protection. 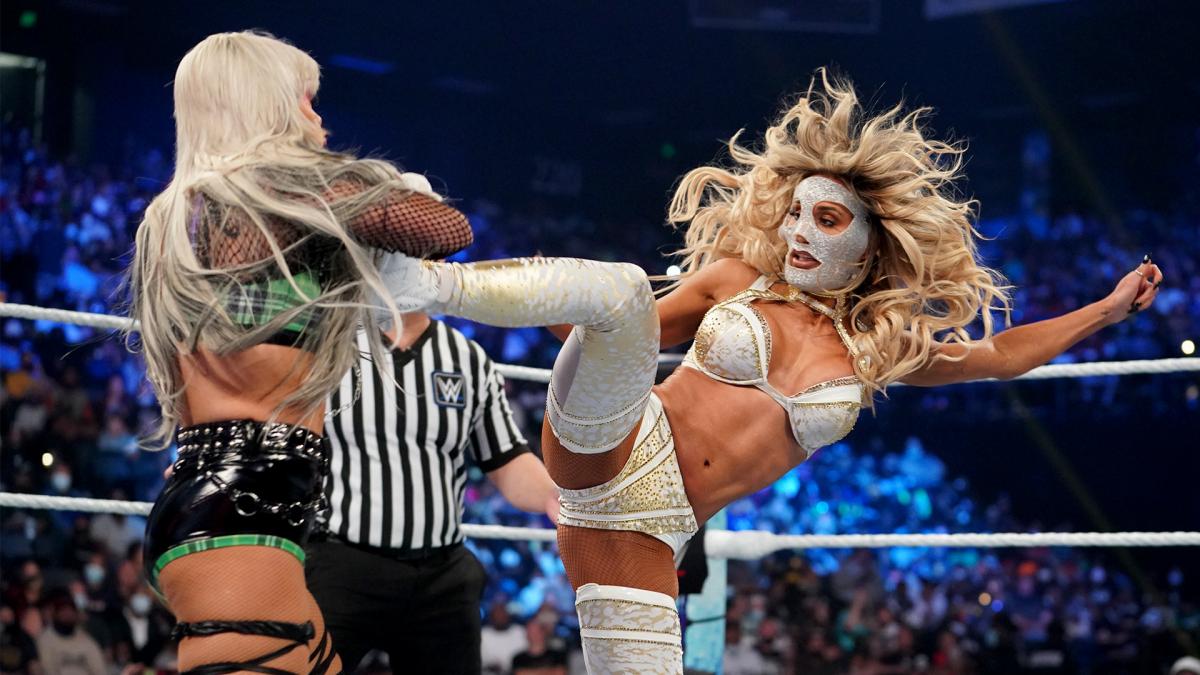 She drops Morgan with her Mella Buster and that’s it.

Wait, I thought the results of the draft weren’t going to come into play until three weeks from now … so why is The New Day here?

You already know that 8-Man tag matches are a mess, so here are the highlights: Kingston, Woods, and Ford take turns dropping axe handles on Ziggler from the top rope, but Ford ends up on the wrong side of the fight against Gable who is working over Ford’s taped-up ribs.  Ford tries to attack the entire heel team but his crossbody to the floor is caught by Otis, who drops him on the apron before throwing him into the barricade.

After the break, Ford is still getting worked over but he finally tags in Dawkins who overpowers everybody and gets a near-fall on Roode with a swinging neckbreaker. As everybody else is fighting, Woods and Kingston hit their backbreaker/foot stomp finisher on Roode for the win.

Winners via pinfall: The Street Profits & The New Day

Deville and Pearce continue to announce the draft picks, with Sonya unceremoniously announcing Naomi’s name for SmackDown, while Raw takes Rey Mysterio, Jr. and Dominik. Deville is more excited about drafting Jeff Hardy for SmackDown, and Pearce reveals the final pick of the night: Austin Theory leaves NXT and heads to Raw.

Braxton continues to interview select draftees as she speaks to Jeff Hardy — except they’re interrupted by Brock Lesnar, who announces himself as a free agent thanks to “his good friend” Paul Heyman. Elsewhere, The Bloodline digest this announcement by Lesnar, and Reigns questions why The Usos weren’t announced as being drafted by SmackDown. Reigns loses his temper, and tasks Heyman with going to Raw on Monday to make sure that it happens.

He tells his cousins to go with him, and if they’re not drafted to SmackDown he instructs them to leave Heyman for dead on Raw.

This match is, naturally, just to fill TV time until Becky Lynch arrives to interfere. Well, that didn’t take long as Lynch comes out before the match begins and joins the commentary team.

Banks and Belair lock up and jostle each other from corner to corner. Banks tries her double-knees into Belair in the corner, but she’s caught and shoved to the ground. Lynch continues to grind on the commentary, trying so hard to sell her heel run that never should have been necessary.

In the ring, Banks lands on her feet after a K.O.D. attempt going into commercial break, and after the break Banks is beating Belair down in the corner before Bianca responds with a stalling suplex and running moonsault for a two-count. After she regains the advantage, Banks lands her routinely unimpressive frog splash, but the fight spills to the floor where Lynch gets involved. Becky holds onto Belair’s braid as she gets back into the ring, allowing Banks to roll her up for the win. 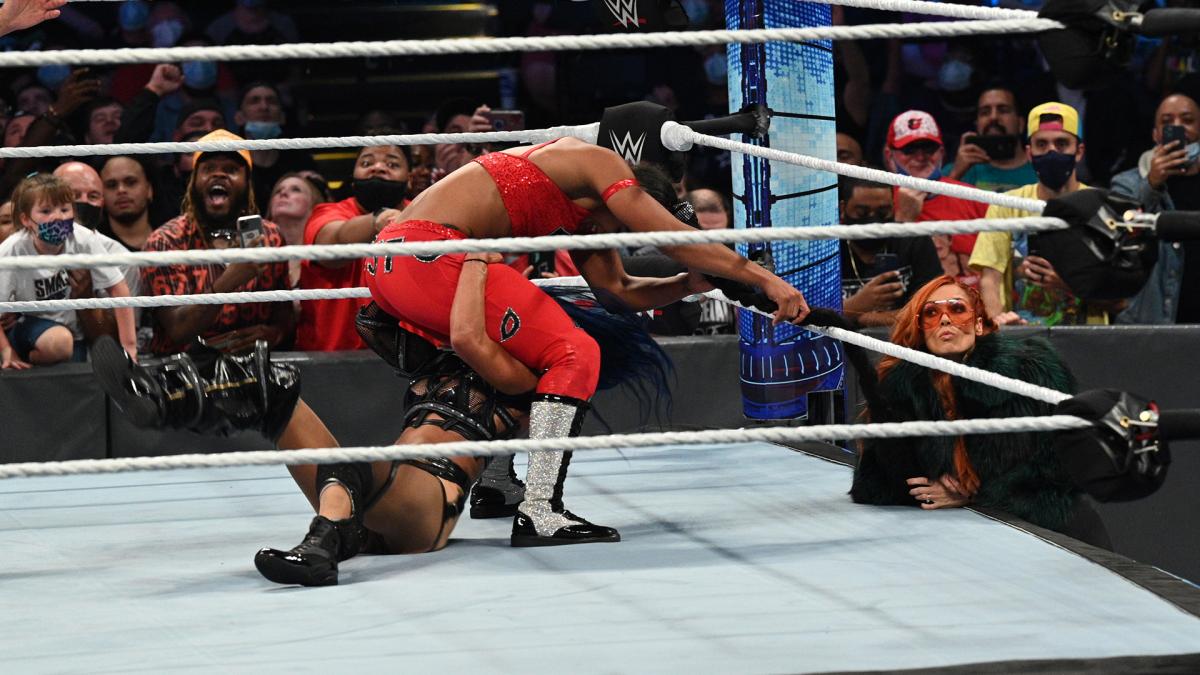 Lynch can play the part, that’s for sure. Photo: WWE

Banks gets very little time to celebrate as Flair gets into the ring and takes out both Belair and Banks, leaving the two women’s champs to hoist up their respective belts and assert their dominance.

The draft should be exciting, but because there’s so little difference between Raw and SmackDown it just feels like a bunch of lateral moves. The main event showed again what kind of a match Belair and Banks can have when given the ring, so that’s promising for the future.