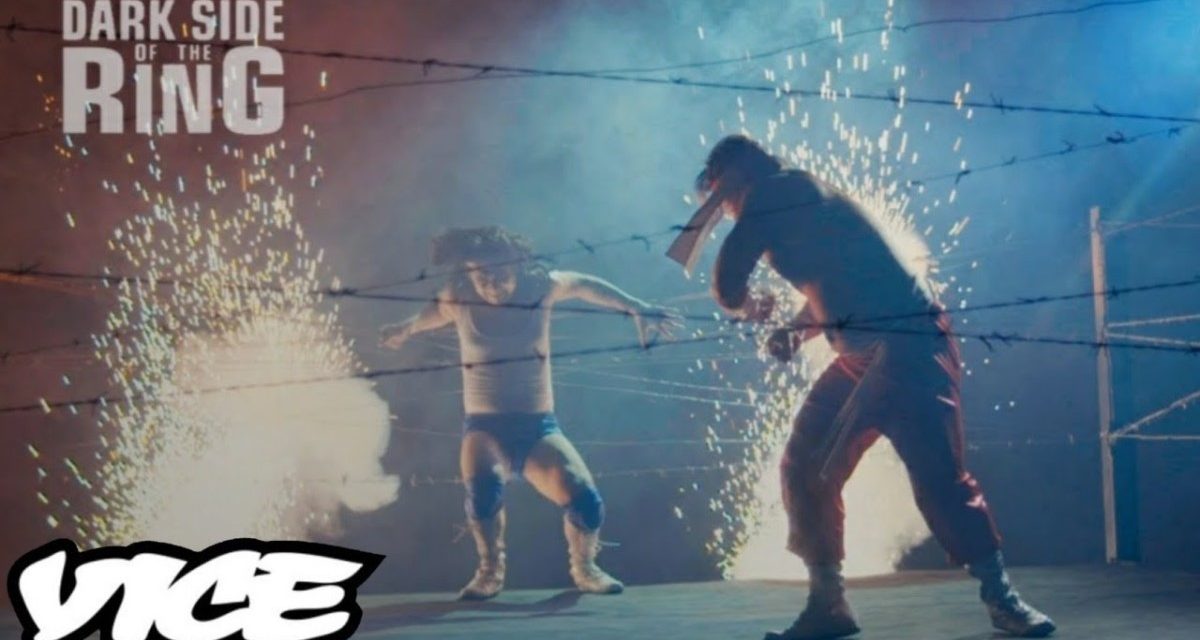 The Dark Side of the Ring series, available on Vice TV (and Crave TV in Canada), has built itself a reputation of telling the stories you won’t hear on either mainstream sports or wrestling programming. Interestingly, in that light, the latest episode featuring Atsushi Onita (titled “Blood & Wire: Onita’s FMW) falls short of offering its regular controversial storytelling. Although Onita and his wild creation of Frontier Martial Arts Wrestling (FMW), famous for its bloody and outrageous deathmatch wrestling, is right up Dark Side’s alley, the episode is a fairly routine telling of an interesting tale.

Mick Foley, Sabu, Ricki Fuji, and Chris Jericho (serving double duty as he continues to narrate the season) all offer up praise for Onita’s ingenuity and for what he gave of himself to the fans, and their criticisms of him, mostly as it related to business practices, are muted. Even the daughter of Shoichi Arai, ring announcer and eventual maligned owner of FMW, brings pointed remarks about Onita as a friend and business partner to her deceased father, but seems neither embittered nor bearing an axe to grind.

Ultimately, controversy is not a requirement for good storytelling, and “Blood and Wire” is a finely told tale. Again, it just doesn’t seem to fit the mould of Dark Side‘s normal tell-all format.

Atsushi Onita tells of how he became enamoured with wrestling after reading a comic book that depicted the fighting adventures of Giant Baba. Through this, he saw how popular wrestling was around the globe and realized that the spectacle would be his way to tour the world. Specifically, he made what amounted to a pilgrimage to Amarillo, Texas, to learn from Terry Funk, who he had seen win over the Japanese wrestling crowds with his over-the-top Western-style wrestling antics. Funk recalls the two of them meeting and neither being able to communicate with one another — but still they became friends.

Onita’s star began to rise as he toured Memphis, Tennessee, but the show highlights a freak injury that Onita suffered in All Japan Pro Wrestling as he jumped nonchalantly to the floor from the apron. After landing awkwardly, Onita could see bone protruding from his knee. The shattered kneecap derailed his career path, permanently affected his mobility, and forced a complete re-thinking of how to forge his path in pro wrestling.

One specific experience in Tennessee helped to focus Onita’s creativity and desire to stay working in the ring: during a wild brawl of a match that had Onita teaming with Masa Fuchi against Eddie Gilbert and Ricky Morton in a Concession Stand Brawl in 1981, an overly-exuberant fan kicked him in the face with her high-heeled shoes, causing both a blood flow and a lightbulb to go off for him. He recognized that the passion in some fans could be ignited by extreme wrestling rules, and he became convinced that his success would come from breaking out of traditional wrestling shows.

His first venture was to run a series of matches in Japan featuring a wrestler, himself, against karate fighter Masashi Aoyagi. Their bloody battles captivated fans seeking a more hardcore form of wrestling in Japan and garnered international attention. Onita claims that this convinced him that he was on the right path, and FMW was born.

The episode draws a straight timeline through the extreme tendencies of Onita’s hardcore match creations: barbed wire matches turned into exploding barbed wire matches, which led to exploding ring matches, which led to electrified pools surrounding the ring. Each successive dangerous creation was embraced by the fans, and Onita had found his niche.

The matches were not always in control, as Foley and Sabu make sure to point out. Foley recalls seeing a woman’s clothing burned into her skin after bring seared by a fireball in her match, and Sabu tells the tale of his uncle, The Sheik, receiving burns across sixty percent of his body in a tag match with Sabu in which the ropes were on fire, but burned out of control forcing the wrestlers to flee the ring to survive.

There are two other main story points that the show explores, one of which features the abrupt departure of Onita from the company he created and his decision to leave FMW in the hands of ring announcer Shoichi Arai. Onita and Funk both look back on Arai’s inability to successfully run the business as an unpreparedness on his part, and his daughter details how the financial pressures that he brought upon himself through his mismanagement (and connections to underground criminal funding) led to Arai’s suicide, leaving both FMW and his own family on the hook for money owed.

The other story point is the devastating injury suffered by rising star Hayabusa in a 2001 match against Mammoth Sasaki. In a manner not dissimilar to Onita’s fate, but much worse, Hayabusa’s career and notoriety were derailed by an accident in the ring, as he attempted a second-rope moonsault, landed on his forehead, and was immediately paralyzed. He would never again walk without assistance.

Onita appears comfortable with his legacy, quite rightly claiming that he brought his own talents into the world of wrestling as best as he could, just as Hulk Hogan brings his own talents, as do Antonio Inoki and Giant Baba. It takes a confident man to list off those names as contemporaries, but Dark Side of the Ring succeeds in establishing Onita as someone who created something no-one had before.

Frontier Martial Arts Wrestling wasn’t built to last as a business, but its legacy is firmly in place.