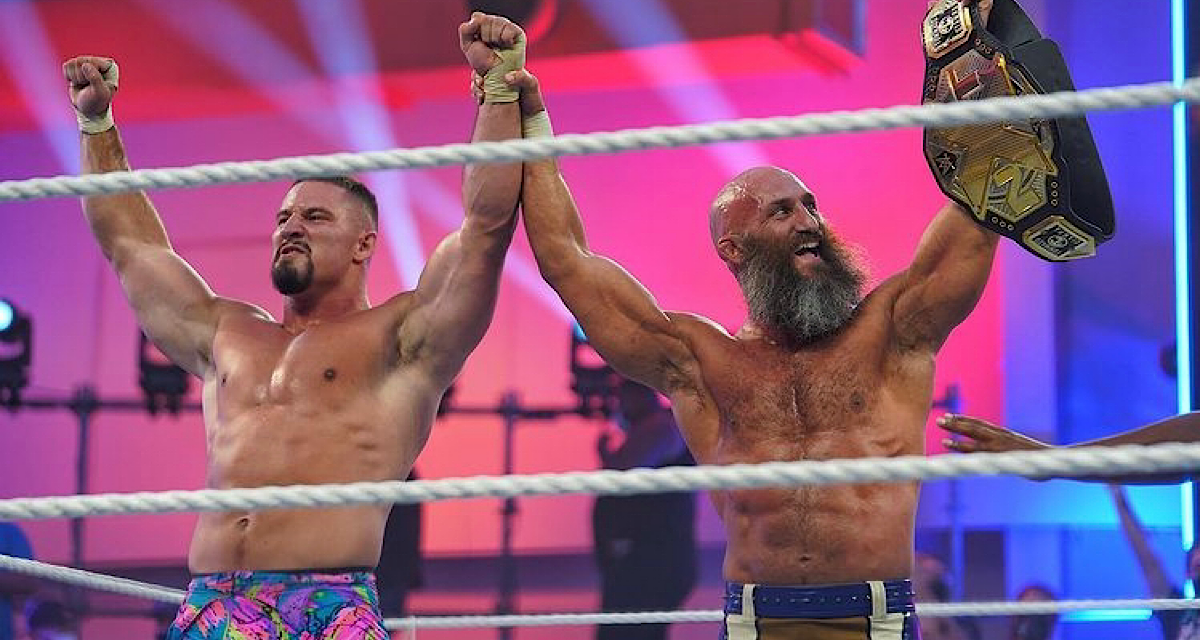 A completely revamped NXT began last Tuesday, highlighted by Tommaso Ciampa winning the NXT Championship once again. Tonight, after a recap of NXT 2.0’s debut episode, “The Blackheart” himself made an entrance with eight young rostermates — including future stars like Carmelo Hayes, Odyssey Jones, and Bron Breakker — surrounding the celebratory promo. The NXT Champion talked about the brand’s passion, and he unquestionably showed it before Cameron Grimes, LA Knight, Pete Dunne and Ridge Holland interrupted. But before long, a multi-person brawl broke loose in-ring, and backstage another brawl between the women’s roster transpired.

Breakker was left standing and shouted out towards Dunne and Holland, “How about you two b– grow a set of balls and face me and Ciampa tonight!” The main event was officially set following an energetic and raucous opening segment — something the former NXT couldn’t usually boast. So there’s a singular positive from revamp night two. Time told, the remainder wasn’t as pretty.

It’s a championship matchup months in the making, and since then, Diamond Mine has acquired about six members — who are a badass-looking entourage for Strong. The top-tier grapplers feel each other out, and Kushida gains the upper hand before commercial. Strong comes back with signature chops and incredibly smooth maneuvers, but the champion catches the left arm. As Malcolm Bivens distracts the referee, The Creed Brothers take out Kushida and allow Strong to connect with End of Heartache for three. Strong is victorious, officially winning the Cruiserweight Championship, which is so well deserved.

WWE has habitually presented huge post-match interruptions, and the trend continues with… Grayson Waller, as the crowd goes mild. Waller is “out here to take” opportunities — and screen time too, and Bivens accepts next week’s challenge.

Tony D’Angelo, who is very Italian, is “coming soon.” A new vignette of the gabagool grappler plays before the following matchup.

NXT’s new tag team of Brooks Jensen and Josh Briggs talk about their formation, which includes footage of an awkward bar fight.

Miller delivers a short offensive flurry before Ray regroups and dominates. It isn’t long before Ray hits the KLR Bomb for three, and that’s all she wrote.

Bron Breakker is interviewed backstage, clearly excited for his partnership with NXT Champion Tommaso Ciampa. His voice alone proves that, yes, he is indeed a Steiner.

Earlier today, Xyon Quinn attacked a poor passerby for cutting off two women. What a chad.

Did someone say Andre Chase? “Welcome to day one of Andre Chase University,” says Chase from an “upper learning” classroom. He reviews Odyssey Jones’ loss to Carmelo Hayes and curses out a student for questioning his teachings.

Gacy pulls a Kevin Owens, sitting dressed up in-ring and underneath the spotlight. The comparisons stop there though, as Gacy begins rambling about peace and whatnot. Gacy continues wrestling in his formal attire, but somehow pulls off a handspring closeline and pump kick without ripping his bottoms. But ultimately, Grimes gains the pinfall with The Cave In. Unfortunately for Gacy, the punishment isn’t over; he comes behind Grimes and forces a big grinning hug.

A recap of InDex’s hilarious wedding plays, and commentary announces that their honeymoon is scheduled for next week.

Legado del Fantasma’s new female member overpowers the opposition while leader Santos Escobar, Joaquin Wilde, and Raul Mendoza look on. Lopez delivers multiple slams and suplexes before finally hitting a powerbomb for three. Escobar takes the mic and sings Lopez’ praises, and she herself speaks, directing a message towards Hit Row’s B-FAB. Well, obviously, they make a run-in, and a pull-apart brawl commences.

A defeated Trey Baxter is met backstage by Cora Jade, who cheers him up with a big smooch. Later, the NXT Women’s Champion meets Franky Monet backstage, as next week, they compete for the title. But yet another new face interrupts: Lash Legend is premiering her new talk show next week. What wonderful news. Robert Stone reacts to it best: “Who even is this?”

When’s the last time a two-on-one handicapped match happened on NXT? The massive Jones rightfully revives the stipulation, manhandling the opposition with ease. Out comes Chase University’s own Andre Chase to make a distraction, but Jones is unfazed. He stacks Millman and Chiappetta up and delivers a big splash for three. Neither the handicap stipulation nor Chase’s steel chair attack, which flimsily broke on impact, could stop the big man.

Blazer guy Ikemen Jiro presents a vignette, showing that he’s truly more than a blazer. Well, maybe not. The “style strong” Japanese wrestler is all about the blazers.

Toxic Attraction, the faction of Mandy Rose, Gigi Dolin, and Jacy Jayne are in-ring. Although the audience absolutely does not care, Rose ridicules everyone for ignoring her face injury. Dolin and Jayne want the NXT Women’s Tag Team Championships, and the title holders themselves, Io Shirai and Zoey Stark, accept backstage.

Ciampa has Goldie back, so at least something’s right again. And praise him, he immediately brings the energy levels up before tagging in Breakker, who tussles with equally buff Holland. Breakker is extremely impressive early on with agility, strength, and intensity — so presumably, his future is brighter than his colorful singlet. His partner, the NXT Champion Ciampa, fights back against Dunne but literally gets clobbered by Holland before break. Eventually, Breakker receives the hot tag — taking the straps down and placing Dunne in a clutch, but Dunne reverses with joint manipulation. The action breaks loose, and meat is slapped before Holland grabs a foreign object. But Kyle O’Reilly makes the save while the referee is distracted, letting Breakker hit a massive slam on Holland for three. As commentary aptly says, “Bron Breakker is the real deal!”

“Ciampa, Breakker heavy lift to victory,” meaning that they carried a frankly brutal show. Endless segments of unknown names, squash matches, and cringeworthy gimmicks was unbearable. If NXT 2.0 wants to be watchable, it needs to feature more highlights like the main event or the opening match — actual, lengthy wrestling matches — rather than the sitcom material presented throughout.