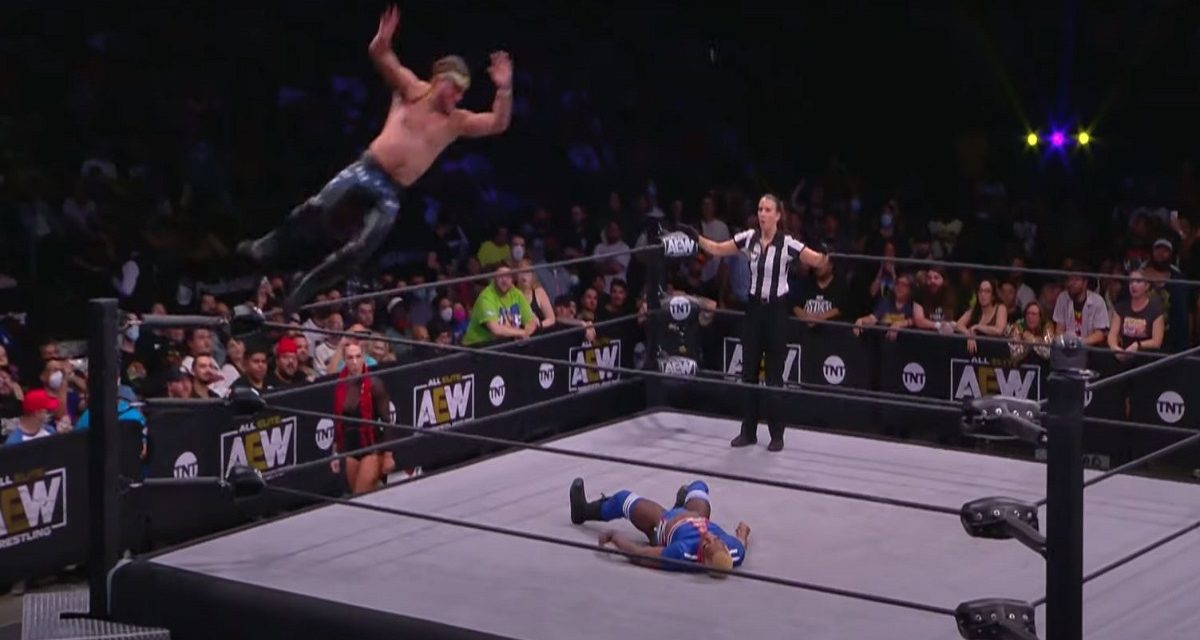 Howdy wrestling peeps and welcome to the AEW Dark Elevation and Dark recaps for the week of September 20th.

I’m definitely giving the nod this week to Elevation as it was the shorter show and had three good matches with the Dark Order vs Dark Order, Sonny Kiss vs Joey Janela and QT Marshall vs Dustin Rhodes. These matches all had good action and storylines behind them. It’s tough to pick one but I’m going to give my recommendation to Sonny Kiss vs Joey Janela as that had some good intensity to it and it’s nice to see Sonny Kiss get some ring time.

Not to be outdone, Dark was a strong show with good pacing. There were a few highlight matches including Alan ‘5’ Angels vs Daniel Garcia and Colt Cabana vs JD Drake, but the 1hr 48min run time made it a bit of a chore to watch. I thought Alan ‘5’ Angels vs Daniel Garcia was probably the best match on that show but still think the best match out of the two nights was Kiss vs Janela.

Tony Schiavone., Eddie Kingston and Paul Wight are on commentary.

1. Thunder Rosa hit the Thunder driver to get the win over Kaia McKenna. McKenna was making her AEW debut and while Rosa did her best, you could tell McKenna was very green and needs some work.

2. Billy Gunn, Austin Gunn and Colten Gunn got the win over Anthony Bennett, Leon St. Giovanni and Ray Jaz when Colten got the Colt 45 on Giovanni for the pin. After the match, Paul Wight stared down the Gunn club from the commentary position.

3. Alan ‘5’ Angels and Preston ‘10’ Vance beat Evil Uno and Colt Cabana when Angels pinned Uno. Throughout the match, Uno was playing the ‘bad guy’ while Cabana was trying to be the peacemaker and keep things civil between the two teams. At one point, Uno unmasked Angels which led to Angels getting the pin on Uno. After the match, Angels offered a handshake to Uno who rejected the handshake and walked out. This was a surprisingly good match from both a workrate and story perspective.

4. Orange Cassidy (w/ Chuck Taylor and Kris Statlander) pinned Mike Verna after hitting the Orange Punch in a quick outing. After the match, the Best Friends hugged, giving the people what they want.

5. Isaiah Kassidy and Mark Quen (w/ Matt Hardy) beat Jorge Santi and Teddy Goodz after hitting the Gin and Juice on Santi to get the pin. You can see the Matt Hardy influence on Private Party’s work and while they’ve been somewhat lost in the shuffle, Private Party are very good.

6. Hikaru Shida got the pin on Marsha Slamovich after hitting the Katana knee strike. This was a good showing by Slamovich who got some hard hitting offence in this match even hitting a nice looking dragon suplex.

7. Sonny Kiss hit a crucifix pin on Joey Janella (w/ Kayla Rossi) to get the win in an entertaining match. Sonny started the match aggressively. Rossi attacked Kiss at one point while ref Aubrey was distracted giving Janela the advantage.  After the match, Rossi attacked Kiss. Janela hit Kiss on the back with a chair and put the chair on Kiss’ back. Rossi hit a standing moonsault stomp onto the chair. .

8. Santana and Ortiz got the win over Avery Good and JT Dunn after hitting a powerbomb/kick double team move in a quick squash.

9. In the main event, Dustin Rhodes got the win over QT Marshall (w/ The Factory) after hitting the Final Reckoning to get the pin. During the match, Aaron Solo distracted Dustin allowing QT to get the advantage. This was another good competitive match

1. Wardlow cut a short promo that this is Wardlow’s world.

2. Wardlow pinned JDX after hitting the Casualty of War knee strike from the corner turnbuckle.

3. Big Swole beat Allie Katch after hitting a rolling elbow to get the pin. Katch was making her AEW debut and got some offence early in the match.

4. Santana and Ortiz got the win over Luther and Serpentico after hitting a combo flatliner on Serpentico to get the pin. This was a solid match and I love the fact Serpentico took and gave out punishment to everyone in this match…including his partner.

5. Joey Janela (w/ Kayla Rossi) beat Dillon McQueen after hitting a death valley driver for the pin in a quick match. During the match, Rossi got some offence in when she dropped McQueen onto the guardrail.

8. Dax Harwood and Cash Wheeler beat Stallion Rogers and Anthony Greene when Wheeler hit a backbreaker combo on Rogers to get the pinfall. Rogers and Greene got a lot of offence in this match and FTR made them look like they had a chance to win the match.

9. The Bunny (w/ The Butcher and The Blade) used the Down The Rabbit Hole to pin Xtina Kay.

10. Lance Archer used the Blackout to get the pin and the win over Marcus Kross in a quick squash. Kross got very little offence but still has the strongest hair care game out of all the AEW roster.

11. John Silver and Alex Reynolds (w/ Alan ‘5’ Angels, Preston ‘10’ Vance and -1) beat Ryan Nemeth and Peter Avalon (w/ Cezar Bononi and JD Drake) when the Dark Order hit a German Suplex/Jackknife combo on Avalon allowing Reynolds to get the pin. This was a pretty decent match.

12. Daniel Garcia (w/ 2point0) submitted Alan ‘5’ Angels with the Scorpion Deathlock. This was a competitive match with both guys getting a bunch of offence. There was some outside interference from but was not overdone.

14. Colt Cabana (w/ Evil Uno and -1) beat JD Drake (w/ Peter Avalon, Cezar Bononi and Ryan Nemeth) after hitting a moonsault to get the pin. This was another good competitive match from this show.

15. In the main event, Eddie Kingston got the win over Bear Bronson (w/ Bear Boulder) after catching Bronson with two spinning back fists for the win. After the match, Kingston cut a promo talking about his upcoming match with Lancer and Suzuki. Archer ran into the ring and we go off the air with Archer and Kinsgton brawling.

Thanks for checking in….c-ya next week.