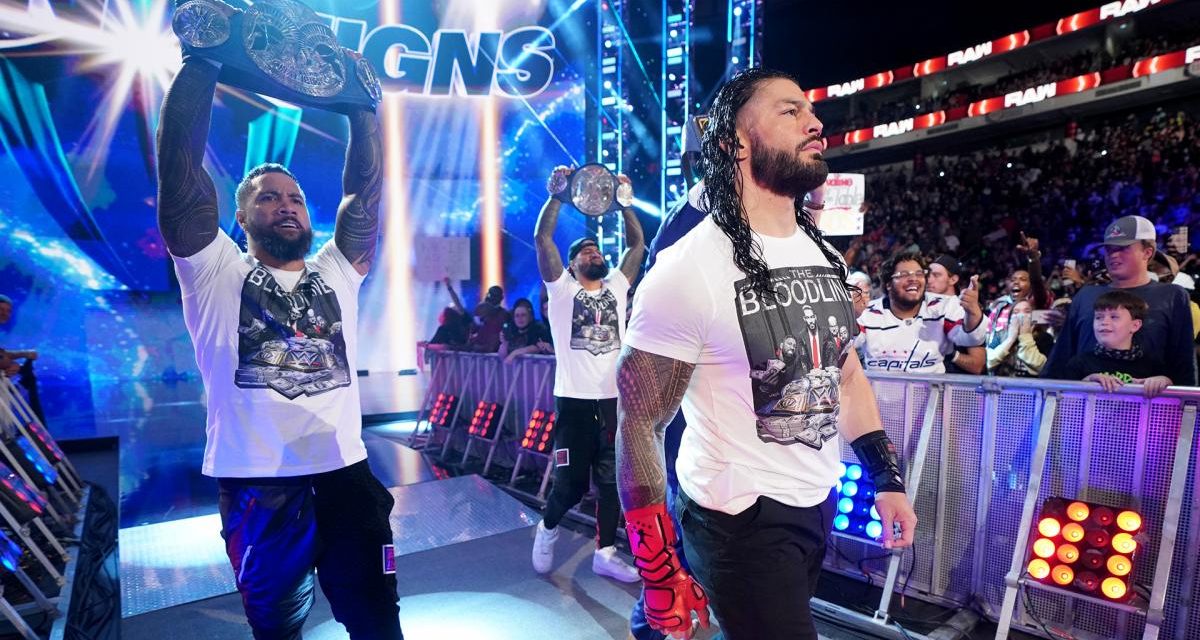 WWE is desperate to get the TV rating for Monday Night RAW up. Last week, it was announced that Big E was going to cash in the Money in the Bank. Now that Big E is the WWE Champion, Universal Champion Roman Reigns is coming to RAW with the rest of the Bloodline. Whatever it takes, I guess. On to the show.

Of course Kofi Kingston and Xavier Woods flank Big E to celebrate his championship. The champ receives a “YOU DESERVE IT!” chant from the North Carolina State crowd. Big E knows it is not November 25th, but he wants to give thanks to all that supported him over the years. He has to cut the celebration short, as they have business with the Usos and Roman Reigns.

Roman Reigns doesn’t waste anytime, heading to the ring with his cousins and Paul Heyman in tow. The two champs stand off, raising their titles in the air.

The New Day vs. The Bloodline w/Paul Heyman

Since this isn’t the main event, I have feeling that someone (Bobby Lashley) will be interrupting. Big E and Roman trade haymakers in the middle of the ring. E tosses Roman around the ring and slams him with a belly to belly suplex. E has to take out Jey on the apron, but walks into a Uranage. Roman wants the Superman punch, but E counters with a suplex. Woods makes the tag, and Kofi takes out the Usos on teh floor. Roman connects with a Superman punch to E. Woods with a superkick, but can’t get the pin.

Bobby Lashley runs down and takes out Kofi by slamming him in the post. He clotheslines Jimmy and sends Jey into the ring steps. Woods watches Lashley and turns around into a spear from Roman. Reigns covers and gets the pin.

Winners via pinfall: The Bloodline

Lashley hits the ring and spears Roman Reigns. He then spears Big E on the floor, through the security barrier.

After the commercial break, Lashley storms into Adam Pearce’s and Sonya Deville’s office and demands to get Big E and Roman Reigns in the ring tonight. The All Mighty Era never stops. Adam and Sonya just look at him in disbelief.

Awwww, Riddle made Randy Orton a special playlist for his match with AJ Styles. Riddle goes on about animals and safaris. Randy just wants Riddle to keep Omos busy by telling him stories. While Orton will try to break AJ’s ribs.

Eva gets on the microphone to address Doudrop. She doesn’t want to body shame, but then does it anyway. Eva tells her that girls like Doudrop could never beat a girl like her.

Eva slips out of the ring at the bell and runs away from Doudrop. Eva gets caught coming back into the ring. Eva rakes the eyes, but her forearm shots have little effect. Doudrop with a senton and a cross body. She covers and gets the pin.

After the commercials, Paul Heyman talks with Adam and Sonya, representing Roman. They shut him down, telling him that there is going to be a triple threat match between Roman, Big E and Lashley tonight.

Orton gains the upper hand and with AJ on the mat, Orton looks to finish him. Omos grabs Orton by the leg, who calls him out. The ref then bans Omos from ringside. Riddle taunts the big man, so Omos decks him. Styles dumps a distracted Orton out of the ring and hti shim with a flying forearm over the top rope. Omos finally heads to the back as we go to commercial.

After the break, Styles charges and Orton, but catches nothing but the middle turnbuckle. Styles runs into a powerslam, but is able to kick out. Orton sets Styles on the top turnbuckle and knocks him to the apron. AJ hangs Randy on the top rope. Orton catches the Phenomenal forearm, but Styles counters into a sleeper. Orton uses the turnbuckle to break the hold. Orton blocks a tornado DDT. Styles with a series of strikes and follows with a Pele kick. Orton kicks out of the pin.

Styles with a forearm shot and follows with a moonsault. Styles looks for the Phenomenal forearm. He shrugs off the distraction from Riddle, but stops himself as Orton was ready. Randy catches Styles in the ropes and hits the draping DDT. Orton finishes Styles with the RKO and covers to get the win.

Has this been the slowest tag team break-up ever? Jax tells Shayna she was nothing without her. Jax keeps running her mouth and back sit up with a shoulder breaker. Jax squashes Baszler in the corner. Baszler fights back with knee strikes and takes Jax down. Shayna with a kick to the face and locks in the Kirafuda Clutch. Jax is able to break free. Shayna locks it back in and takes Jax to the mat. Nia passes out and the ref calls for the bell.

After the bell, Baszler kicks Jax off the apron to the floor. Shayna then kicks Jax’s arm that was stuck into the ring steps. She follows with the elbow stomp as Nia cries for mercy.

Mansoor and Mustafa Ali vs. Humberto Carrillo and Angel Garza

So is Carrillo a heel now? Yup, after cutting a promo with his cousin, Humberto has joined the dark side. Ali is thrown into the post and rolled back into the ring. Garza hits him with a drop kick and covers to get the pin.

Before the match, Nikki and Rhea talk about Connor’s Cure and pediatric cancer fundraising. Rhea gets choked up. There’s no way they are losing now, right?

Ripley is knocked off the apron, as Natalya and Tamina team up on Nikki in the corner. Tamina hits a Samoan drop and goes up top. Nikki gets her knees up, but Rhea is still on the floor. Nattie gets the tag and slams Nikki. She follows with a basement drop kick. On the floor, Ripley takes out Tamina on the floor with the Riptide. In the ring, Nikki rolls up Natalya with a small package and gets the three count.

Bliss welcomes her guest tonight, RAW Women’s champion Charlotte Flair. The champ isn’t in the mood for any tricks. Bliss just wants to have a girls night, but notices someone is missing; Charly. It’s okay, Alexa brought her along. Flair doesn’t want Charly; she wants the old Alexa Bliss back. Flair knows Bliss is broken and is hiding behind this persona and calls it a desperate cry for help. Flair wants to know if she should beat down tonight or wait until Sunday at Extreme Rules.

Bliss has a question; without a title, who is Charlotte Flair? Nobody knows; not even Charlotte. Bliss gave her Charly as a pity gift. Alexa knows who she is and doesn’t have to grasp at titles to stay relevant.

Flair shoves Bliss in the face and Alexa jumps her. Flair catches Bliss with a kick to the face. Alexa leaps on Flair’s back, but is dumped to the mat. Flair picks up Charly and rips her head off. Flair wants Lilly, but Bliss intercepts her and drops the champ with a DDT.

Drake Maverick has a plan to catch 24/7 champion Reggie and take his title. It involves dropping a net on him. Instead, they catch Drew Gulak and Reggie escapes. Drake blames R Truth.

If Hardy wins this match; he will get added to the United States championship match at Extreme Rules. The champ, Damien Priest, joins commentary.

After the match, Sheamus yells at Priest for having to face Hardy, The two brawl at ringside and then into the ring.

Lashley attacks Big E as soon as he hits the ring. E turns the tables, pounding on Lashley on the apron. Reigns cuts E down with a sliding kick.  Roman with a clothesline in the corner, but Big E grips him in a bear hug. He suplexes Reigns, but gets caught by Lashley and drug to the floor. Lashley slams E into the barricade.

Bobby hits Reigns with a flatliner. He picks up Reigns, delivering a delayed vertical suplex. Lashley tries to pick up Big E, but he floats over and hits a belly to belly suplex. With Lashley and Reigns both down the WWE champ splashes across both men. Big E runs into a knee strike from Roman and takes a spine buster from Lashley.

He works E over with the chair. Lashley with chair shots, but gets speared by Roman, who covers to get the three count.

See you next week.

Monday Night RAW delivered another solid wrestling focused show. Even adding the Bloodline to goose ratings wasn’t a bad thing. Sure not every match was a winner. I’m looking at you Eva Marie, but to make up for it we did get a surprise title change.