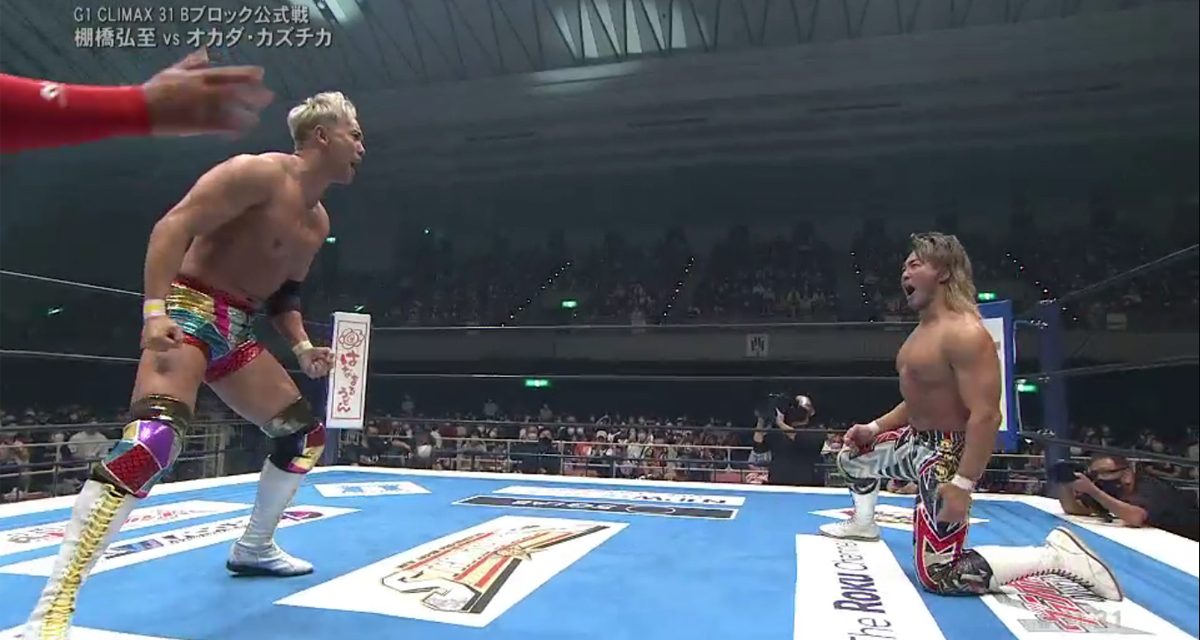 Two of NJPW’s very best of all-time engaged in a head-on collision as B Block took the stage on night two of  G1 Climax 31.

The crowd claps along with The Ace as Okada stares out at them with a smile on his face. A hush falls over the Osaka Prefectural Gym as two of the best of their generation lock-up. The Ace and The Rainmaker trade holds and escapes. The Ace escapes the Rainmaker clothesline. He takes over Okada with an arm drag. Okada turns that into a head scissors. Both men get to their feet ready for more. The crowd claps their approval as they both back into their respective corners to catch their breath. 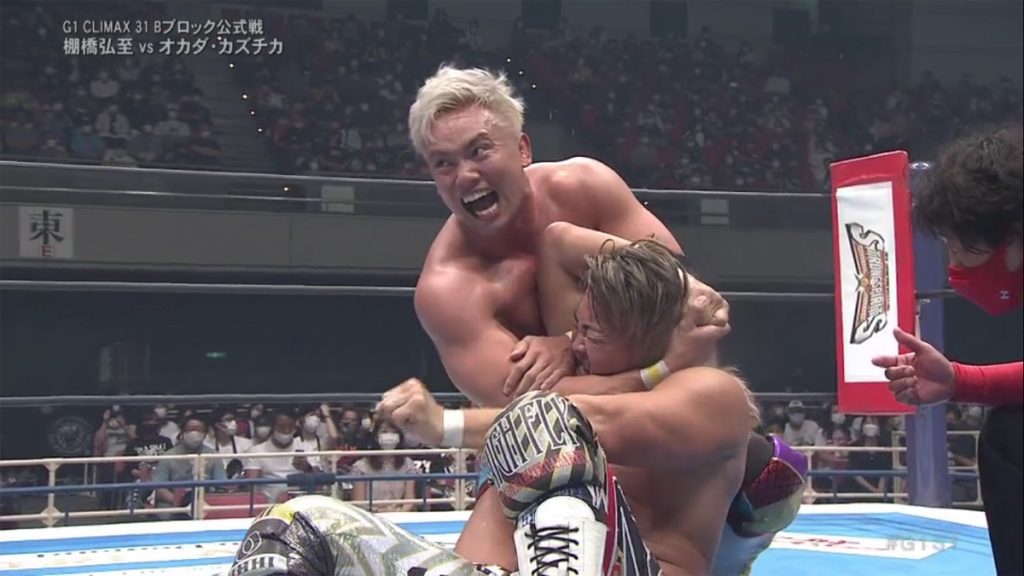 Okada has the Money Clip locked on. Courtesy: NJPW.

Okada slows things down with a headlock for quite some time. The Ace is burning to pick up the pace. Okada gets a one count after a neck breaker. Okada halts the momentum with a running drop kick to Tanahashi. A dragon screw leg whip puts The Ace back in control. A flying forearm has Okada reeling. A senton out of a corner gets The Ace a two count. Tanahashi follows up with his clover leaf submission to work over Okada’s leg, knee. Okada rolls to the floor. Okada slams The Ace’s head into the ring apron and then DDTs him on the floor.

Okada puts The Ace on the top rope drop kicking him to the floor. Okada looks to Tombstone Piledrive The Ace off the apron. The Ace fights out giving him a dragon screw in the ropes before taking Okada down on the floor with Aces High from the top rope. A series of neckbreakers and a Slingblade has the official slapping a 2 count for The Ace.

Okada turns an Aces High into a Money Clip submission. The Ace finally reaches the ropes but he was locked in the hold for quite some time. The Ace tries to Tombstone Okada. Okada reverses it spiking The Ace. Okada goes for the Rainmaker Clothesline. The Ace rolls him up for a quick two count. Okada soars with a flying elbow smash from the top rope. The Ace counters the Spinning Rainmaker with two Slingblades. Okada gets his knees up to block the High Fly Flow. Okada nails The Ace with a standing drop kick after a slugfest with him in the middle of the ring. With under 30 seconds left Okada puts The Ace away with a modified Tombstone and a Rainmaker Clothesline to end one of the best matches you will see this year.

Like he did to the Young Lion last night Sho spends most of the match on floor. Sho once again removes one of the corner coverings to smother Fujita. Sho suplexes Fujita into oblivion and makes him submit to Snake Bite.

Dick Togo comes into play as he always does. Evil puts Hashi in the Scorpion Death Lock on the floor then throws him into the ringside barriers knocking over the time keeper and their desk…again. Hashi kicks out of Darkness Falls. Hashi gets thrown into an exposed turnbuckle but comes out with a running clothesline. Evil escapes the Butterfly Lock by grabbing onto the official. Dick Togo comes into the ring. Hashi super kicks him in the face. Evil holds the official down on the mat. Hashi has Evil pinned. Togo distracts the referee. Low-blow. Everything Is Evil. 1, 2,3. Kevin Kelly jokes that Togo should be given a point in the tournament. Funny that. 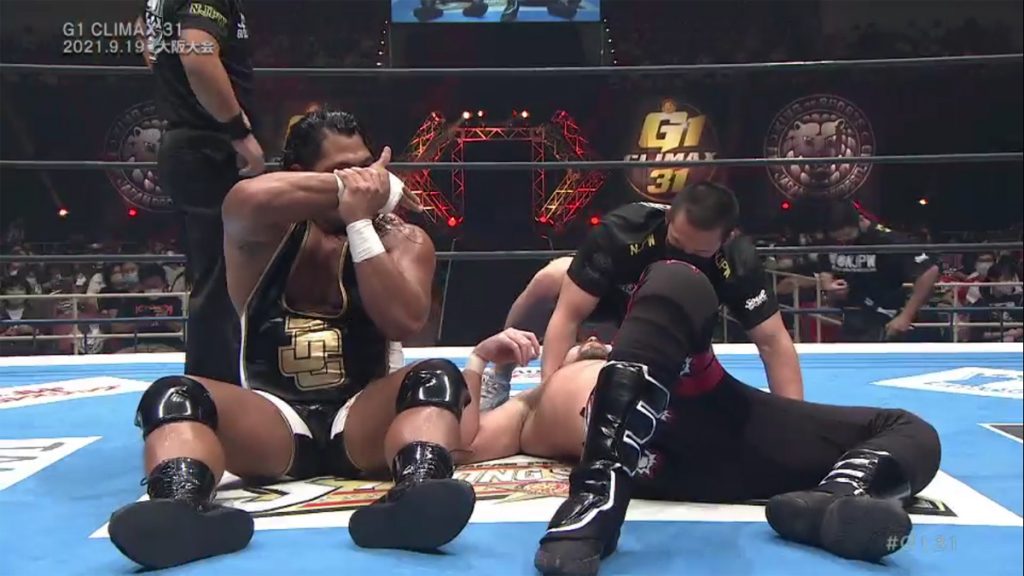 Chase rushes in. Cobb just knocks him down to the mat without much effort. Owens rolls to the floor. “Come on, let’s fight!” yells Owens on the floor putting his fists up. Cobb gives Chases a belly-to-belly release suplex on the floor. Cobb works over Chase’s back. Cobb blocks a running knee strike, haymaker, kick to the head, Tour of the Islands. 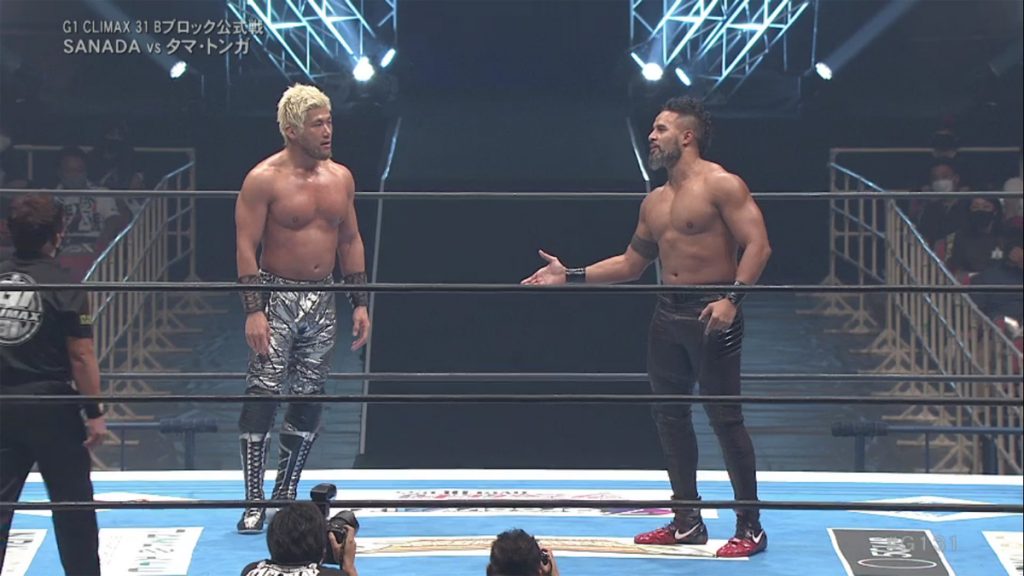 A fantastic match, one of the best of the tournament thus far. Jado is with Tonga. Jado grabs onto Sanada from outside the ring. Sanada frees himself, leaps over Tonga and Tonga ends up drop kicking Jado in the face. Tonga puts the match on pause as he offers to shake hands with Sanada. He says he respects him. “Come on. We just did an amazing spot together,” says Tonga. Tonga climbs one of the corners. The crowd claps their approval. Tonga invites Sanada to do the same. When he does, Tonga tries to roll him up out of the corner. Sanada gets clotheslined over the top rope and almost doesn’t make it back into the ring in time. Tonga slams Sanada into the ringside barrier, into a steel post and suplexes him on the floor. Tonga leaps up for the Gun Stun. Sanada catches him and rolls him up with a bridging pin for the win.