SmackDown: The B-EST homecoming ever 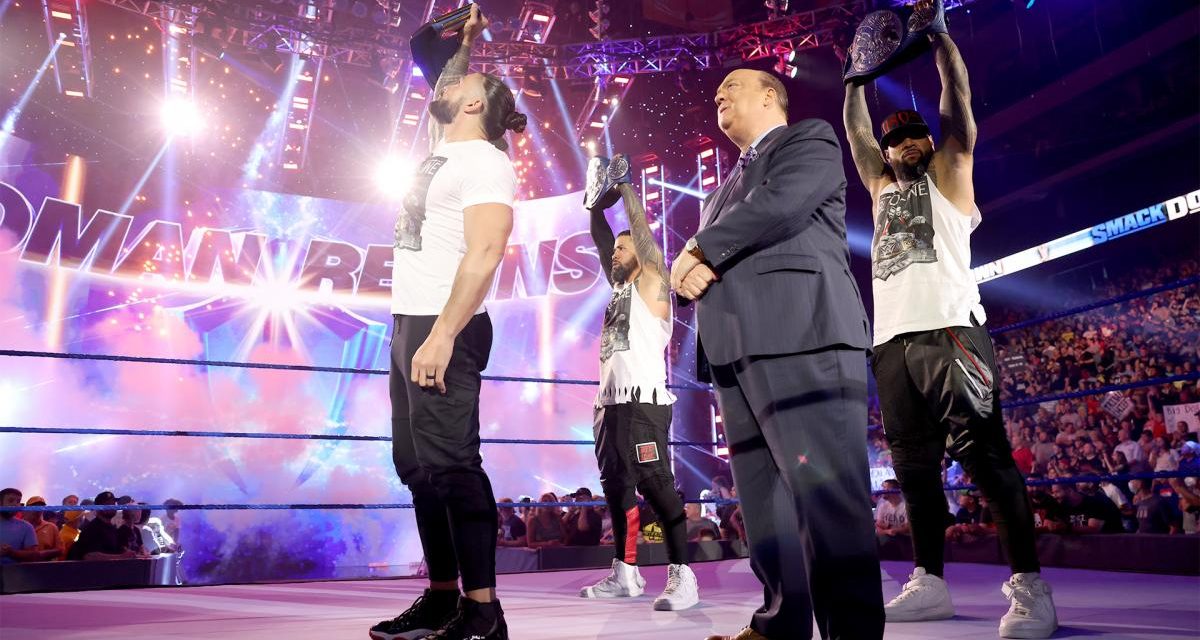 Monday Night Raw saw the crowning of a new WWE Champion in the form of Big E Langston, so what lies in store for SmackDown’s own Universal Champion Roman Reigns? Well, I’d argue he has 55 more days as champion to go until he can eclipse CM Punk’s modern-day mark of 434 days.

Of more immediate concern to the champ is the arrival of both Langston and Balor during his show-opening promo — well, Paul Heyman’s promo. Reigns’ special consultant was in the middle of explaining why both Balor and Lesnar are afraid of Reigns (the former is unlikely, but the latter is demonstrably untrue based on the history of their rivalry) when the interruption occurs.

This leads to a match being made during the break featuring Balor and Langston versus Jimmy and Jey Uso. As always, one wonders what the plan for the opening of the show was before this contest was inserted at the last moment. Perhaps a Zelina Vega match?

The stipulation was announced by Michael Cole moments into the match; is every non-title match against a champion now a “contender’s” match by default? Someday, if the WWE succeeds in making this ludicrous stipulation a tradition, they’ll be able to appear very avant-garde by announcing a match where beating the champions at any time gets you the title.

Balor knocks Jimmy down with a dropkick and tries a quick pin before tags for both teams find Langston wiggling to the floor, dragging Jey to the apron for a splash. As Langston returns to the ring, though, he’s caught by the Usos in their corner for a double beatdown, and a double suplex nets them a two-count.

Langston allows Jimmy to crossbody himself against the ringpost before tagging in Balor, who quickly falls prey to the Uso teamwork as well. Back from break, Balor is in trouble before a Pele kick on Jimmy allows for a double tag. The new champ sends Jey flying with a belly-to-belly, but Jey responds with a Samoan Drop. With Jey standing on the apron, Langston thinks about spearing him through the ropes, but a kick to the face stops him cold.

How many times will Cole and Pat McAfee refer to Jey Uso as “Main Event” as he opens the show? The answer is many. Langston and Balor suddenly decide to end the match, as Balor hits a Coup de Grace on Jey while Jimmy receives a Big Ending. As usual, the WWE likes to prove that tag champs don’t stand a chance against two individual superstars. 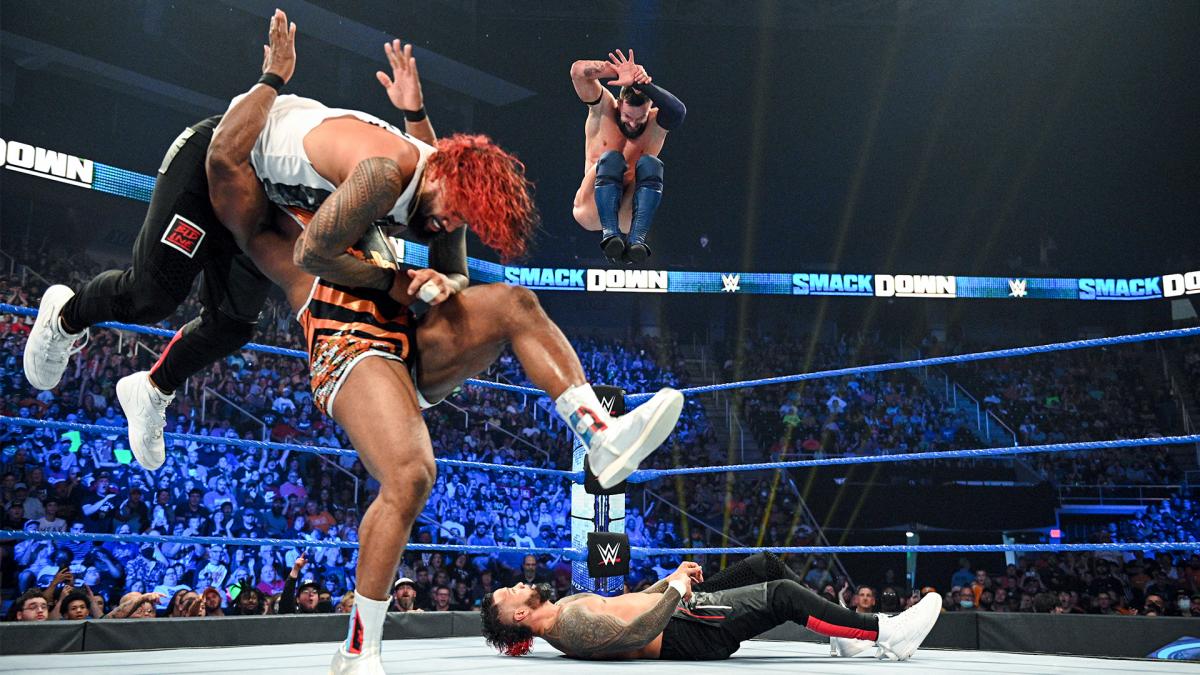 I’m pretty sure I’ve seen a picture like this before in a medieval painting. Photo: WWE

Back in Reigns’ private dressing room, he asks Heyman if he has something to tell him. Heyman insists again that he had no idea Lesnar would be at SummerSlam, and also insists, rather too knowingly for Reigns’ liking, that Lesnar will not be at Extreme Rules.

Roode runs Boogs around at will, sending him into the corner before bringing him to the mat with a Blockbuster. Roode thinks of a Glorious DDT but Boogs reverses it into a Samoan Drop, followed by hoisting Roode like he was lifting weights. A bulldog followed soon by a Boog Cruise makes Roode look like Barry Horowitz. 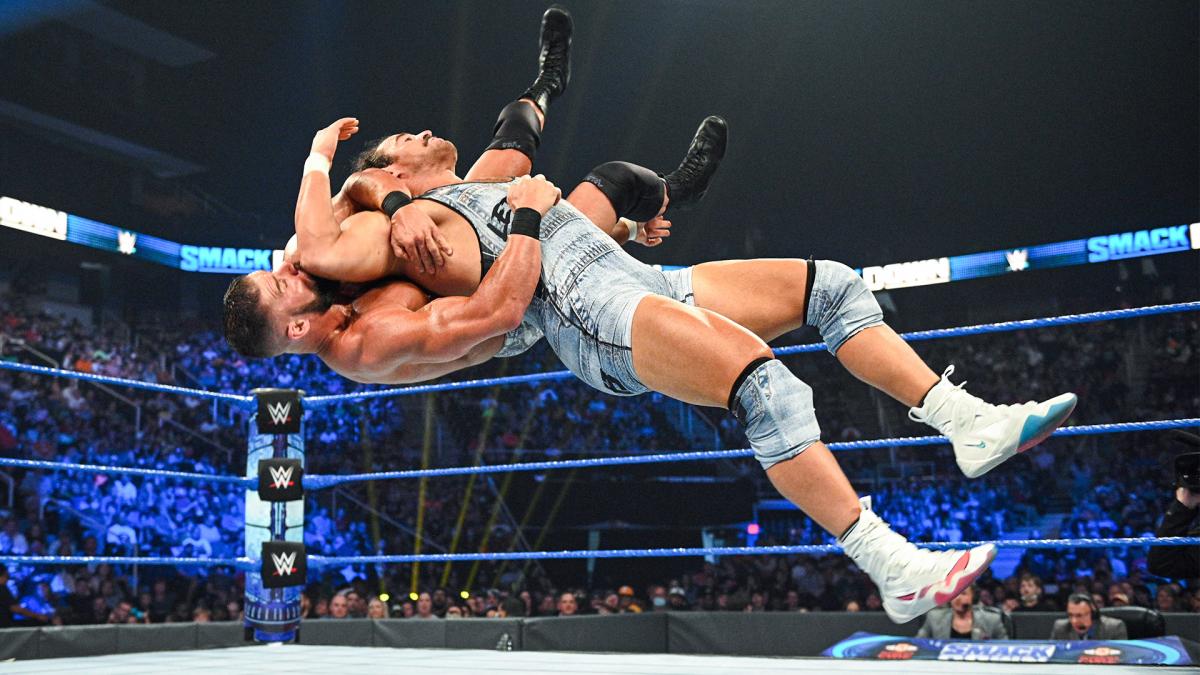 As McAfee mounts the commentators’ table to celebrate with the winners, Commander Azeez and Apollo Crews arrive to decimate them (not McAfee). Crews grabs a mic and demands a rematch.

Back from break, Kevin Owens is feeling frustrated by his dealings with Happy Corbin and Logan Paul, but he plans to take it all out on Corbin tonight.

Corbin attacks Owens on the ramp, taking Owens out with a chokeslam onto the apron.

Backstage, Heyman chuckles his way through an interview by Kayla Braxton, until he angrily accuses her of lusting after him. You read that correctly. Heyman is startled by Langston’s sudden appearance, but he recovers to congratulate the new champ, while also congratulating him on dodging Reigns.

Now it’s Langston who’s surprised, as The Usos attack him and beat him up all over the loading dock.

Seth Rollins comes out looking like a backup singer for DEVO to talk about how he beat Edge last week in Madison Square Garden. He said that the end of the match scared him, and that Stomping Edge reminded him of stepping on a cockroach. He shows everyone the footage of him beating Edge last week, and he says it’s difficult for him to watch. He asks the WWE Universe a question: “What did you think was going to happen?”

He says that beating Edge was the best win of his career, and that he didn’t go too far when he did what he did last week. He blames the WWE Universe for encouraging Edge into going after Rollins. Rollins says he’s not done with Edge. He speaks directly to Edge, asking if he’s physically and emotionally capable of returning to the ring. He says that seeing the look of fear on Edge’s face as he was put onto the stretcher made him feel sorry for Edge, and he can’t stand feeling sorry for someone like him. He wants to face Edge one more time so he can move past him.

Kayla Braxton interviews Becky Lynch, who says that sure, Bianca might gain some momentum from her homecoming tonight, but she also had a lot of momentum before SummerSlam, and the result of their match at Extreme Rules will be the same as the SummerSlam match. Becky also says that she’s never been to a homecoming before, and that maybe she’ll have to check it out tonight.

Zelina Vega and Carmella VS Liv Morgan and Toni Storm

Carmella starts off the match with a cheap shot on Liv, before running away from Toni to tag in Zelina. Zelina gets hit with a kick from Toni, but when Toni goes for an attack in the corner, Carmella distracts her, allowing Zelina to hit a kick and a running knee for 2. Toni delivers a suplex to Vega, and both competitors tag in their partners.

Liv hits a backstabber onto Carmella before slamming her into the turnbuckle. Carmella starts screaming about her nose, and she runs out of the ring and gets counted out. Another great women’s match on Friday Night SmackDown. Liv challenges Carmella to a match at Extreme Rules, where Liv plans to make Carmella look as ugly on the outside as she is on the inside.

Finn Balor takes some time to tell us where the Demon comes from. He says he was born into a family of railroad workers, and he had to fight to get to WWE, unlike Roman, who was born into a wrestling family. He says that the Demon is a personification of everyone who’s ever told him he can’t achieve what he wants or disrespected him, and when Roman and the Usos disrespect him, they only add fuel to the fire. Right now, he says, we’re looking at the face of Finn Balor, the challenger, but at Extreme Rules, we’ll be looking at the face of the Demon, the Universal Champion.

Naomi finally forcefully tells Sonya Deville to give her a match. Sonya once again tells her to ask next week, but Naomi tells her off, saying that she’ll get a match one way or another. Later in the night, it’s revealed that this encounter netted Naomi a fine for insubordination towards a WWE official.

Sami goes outside and insults Rey, so Dominik follows him out. Sami runs back in and attacks Dominik with punches and a clothesline when the young Mysterio re-enters the ring. Sami gets a 2 count and then rains down forearms, but Dominik fights back with a springboard hurricanrana. Sami hits a powerful kick, but when he goes for a springboard of his own, Dominik hangs him up on the ropes and dropkicks him to the floor. He delivers a triangle splash as we go to commercial, with Rey’s encouragement in the background. 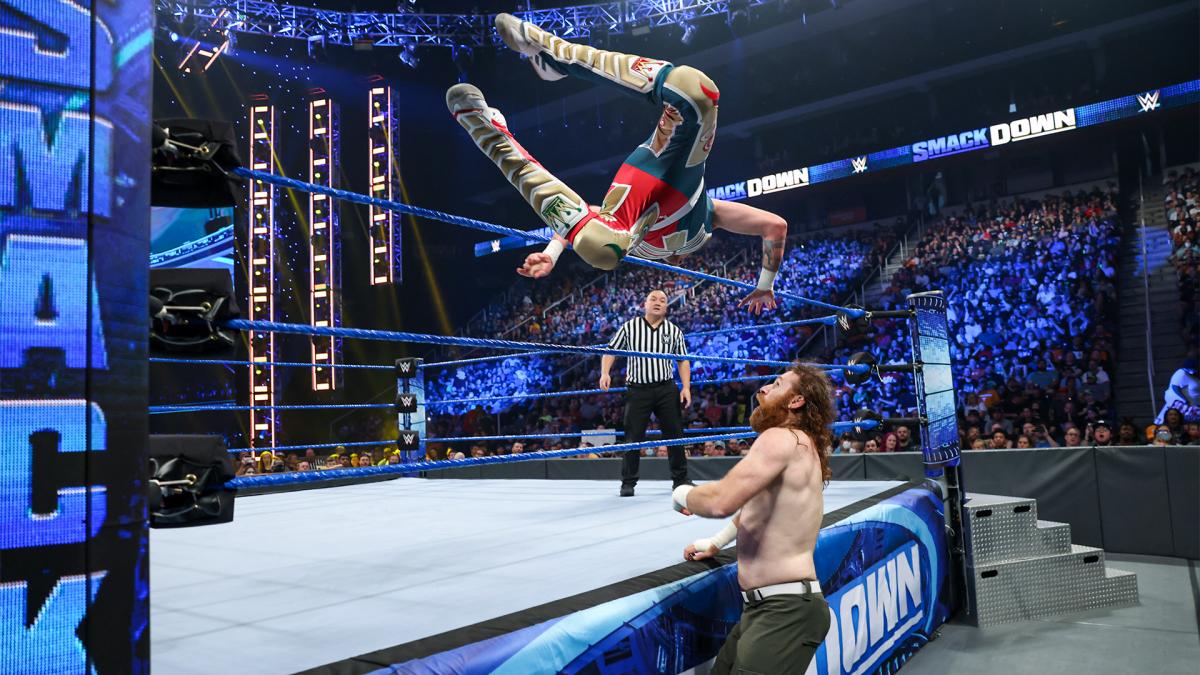 Dominik with an impressive splash on Sami Zayn. Photo: WWE

When we come back, Sami is looking for the Blue Thunder Bomb, but Dominik reverses it beautifully into a headscissors for a close 2. Dominik hits a Tornado DDT for another close 2, and he hits the 619, but when he goes for a Frog Splash, Sami gets the knees up, and rolls him up for the win.

To start off Bianca Belair’s homecoming, Kane makes his entrance. It’s crazy to me every time I remember that the Big Red Machine, Kane, is the mayor of Knox County. He welcomes Bianca Belair home, and so does the WWE crowd. He gives her a key to the city, and Bianca thanks everyone who helped her to get to this point. She asks everyone to help her sing Rocky Top, the fight song of the University of Tennessee. 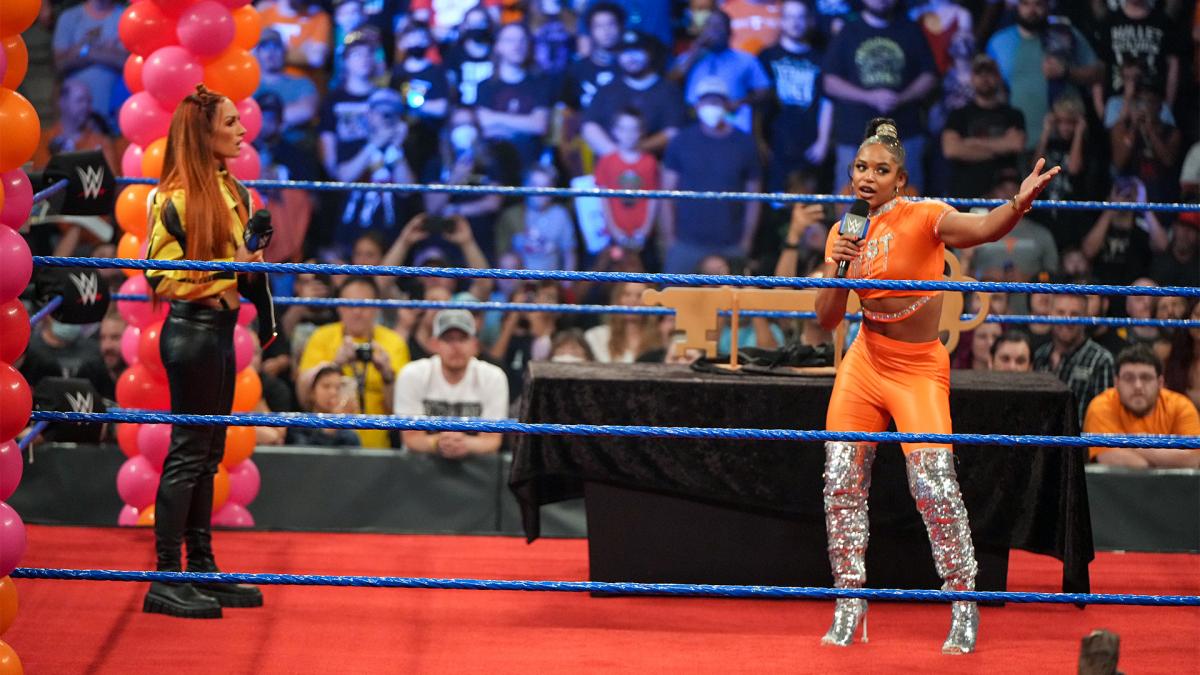 Nothing like the roar of a hometown crowd. Photo: WWE

Becky Lynch interrupts them, saying that tonight is Belair’s night, and she just wants to shake her hand. Belair does just that, but she holds on, and tries to grab Becky for the K.O.D. Becky gets out of the EST’s grasp and hits a Manhandle Slam, spoiling the EST’s homecoming.

Quite the lackluster SmackDown. The contenders match thing is very silly, and I’m tired of miniscule women’s division action that has stupid endings. And it’s slowly dawning on me that Finn is probably going to lose at Extreme Rules. I really just have no idea what I would do if the Demon got his first loss, that would be the cherry on top of the 5 years of disrespect that Finn Balor has received.