Rampage: Hardy shaves a humanoid and Miro wins a car 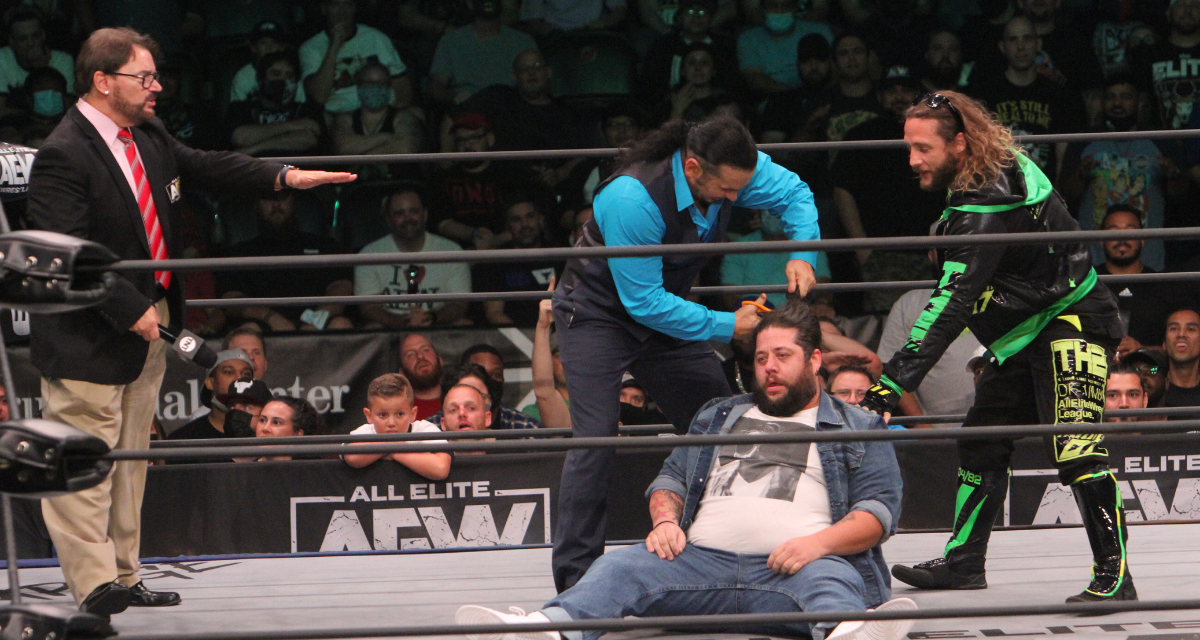 Those ham-and-eggers. They just never learn. Matt Hardy took his hatred of Orange Cassidy to the next level on Rampage tonight. Furious with the Home Office’s poor performance on the show Hardy unleashed his anger on an Orange Cassidy fan (plant) in the front row.

“Nobody does THAT without paying the price!” yelled Hardy in the humanoid’s face as the fan greeted him with Orange Cassidy’s thumbs-up salute.

Hardy pulled Peter Plant over the guard rail and dragged his sorry butt into the ring to an awaiting Jack Evans. Evans pummeled Plant with shots to the head until Hardy punked him with a Twist of Fate.

Hardy stole a page out of Brutus Beefcake’s book by pulling out a pair of scissors and an electric razor to give Plant a whole new look. Orange Cassidy finally arrived to save the humanoid from any further embarrassment.

Our main event saw new-comer Fuego Del Sol fight the good fight against champion Miro for the TNT Championship. Sol danced just beyond Miro’s reach peppering him with chops and kicks. Miro was not hurt or amused. On the floor, Sol shoved Miro into a steel post twice, gave him a running hurricanrana off the apron. Miro backdropped Sol over the guardrail. Fans caught Sol placing him on top of the railing. Sol jumped off only to be caught by Miro who splattered him with a fallaway slam on the floor. 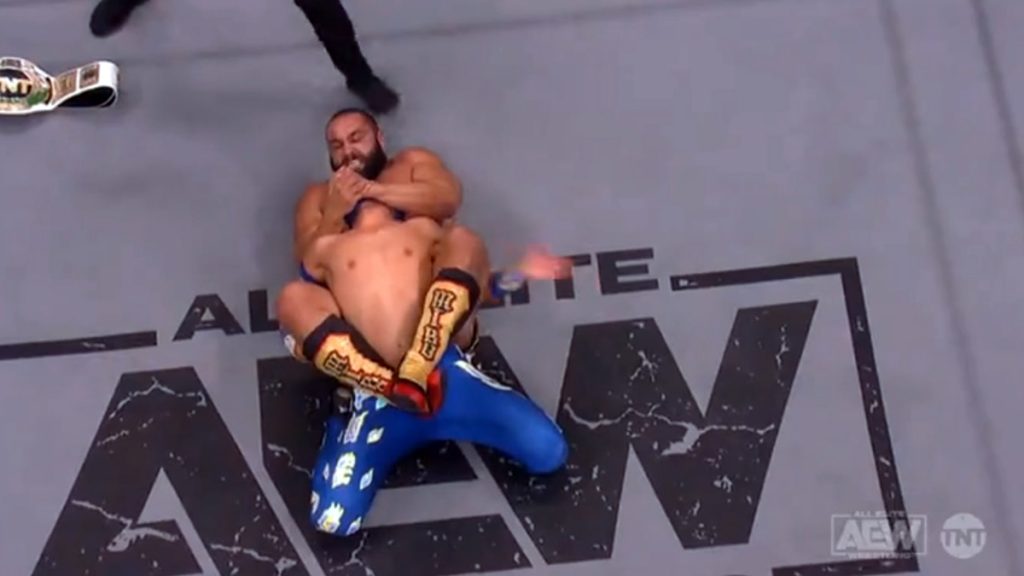 Miro squeezes the life out of Sol. Courtesy: AEW.

Sol stunned Miro with two double stomps to the neck and head. Miro snapped backing Sol into a corner beating him down with sledgehammer blows. Miro pinned Sol with two “Machka Kicks” to the head. As per the stipulations of the match Miro won Sol’s new car.

Miro takes the keys, crams them into Sol’s mouth and puts him in Game Over. Sammy Guevara dives into the ring to save his pal. A running knee strike drives Miro out of the ring. Sammy taunts Miro with the TNT Championship he left behind. I guess we have Miro’s new challenger, folks.

Not much in the way of musical references from Chris Jericho this week so here’s a tribute to The Blade by one of Jericho’s and my favourite bands of all-time, Iron Maiden. Flash of the Blade from the PowerSlave album and Dario Argento’s film Phenomena starring Jennifer Connelly and the late, great Donald Pleasence.

Back to the match…

Blade just shoves Fenix around using his strength. Blade cannot keep up with Fenix as the pace picks up. Butcher lays waste to both brothers. Fenix fights off both the Butcher and the Blade. The brothers splash B&B on the floor. Blade ties Penta to a corner using his own mask. B&B double-team Fenix. The official does nothing to free Penta. Penta finally tears his mask off , hits a super kick so that Fenix can get the pin and retain the titles. Private Party rush the ring to help B&B batter the Brothers. Proud and Powerful make the save chasing B&B and Private Party off.

Anna Jay versus The Bunny

Penelope Ford is with The Bunny while Tay Conti is with Anna Jay. Jay jumps The Bunny on the floor. She suplexes The Bunny. After trading blows and moves in the ring the match moves back to the floor where Bunny turns things around by slamming Jay’s shoulder into the steel post, the ringside barrier and on the arena floor. Penelope leaps up on the apron. Conti pulls her off. They get into a brawl. Jay pins a distracted Bunny. Bunny and Penelope work Jay over inside the ring. Conti comes to the rescue. Penelope puts on those brass knuckles and lays out both Jay and Conti with them. 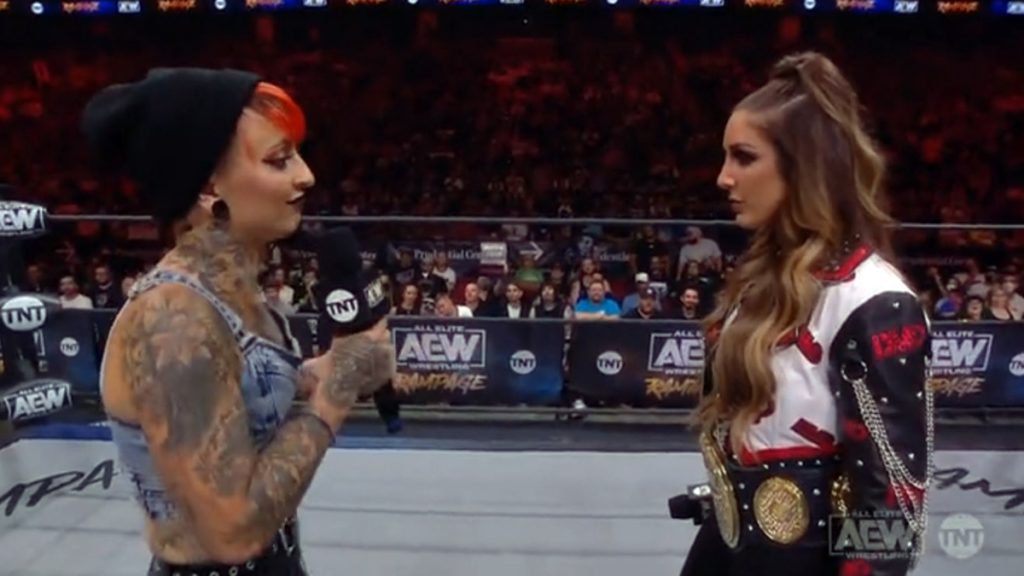 Ruby and Britt roast each other. Courtesy: AEW.

Ruby Soho and Britt Baker have a meeting of the minds in the middle of the ring. It goes something like this.

Baker: You are still trying to figure out who you are. How many times did you change your name in the last year?

Soho: I know exactly who the hell I am. Up until now, I just haven’t had the freedom to prove it. On the surface, you look like every other broad that I have been across the ring from. You are entitled, self-centered and banging some dude in the back.

Baker: You have the audacity to call yourself ‘The Runaway’ but you didn’t run away from anything. You got fired!

Soho: I am surprised you can see much of anything with your head so far up Tony Khan’s ass.

Baker takes a swing at Soho with the title belt. Soho takes Baker down, blasts her with some shots. Baker leaves without her belt. 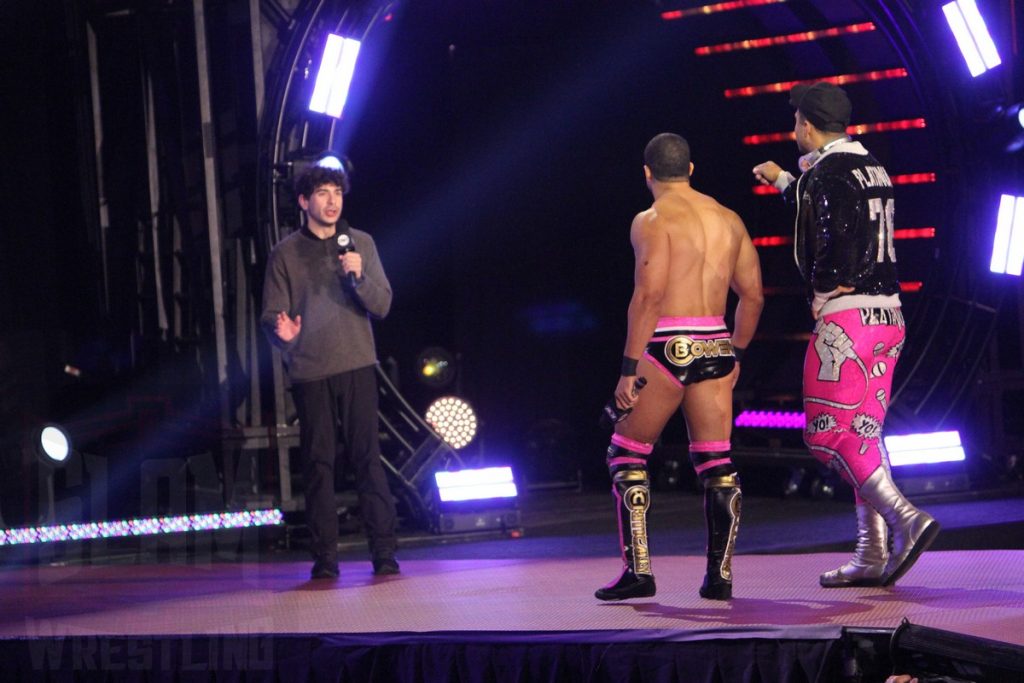 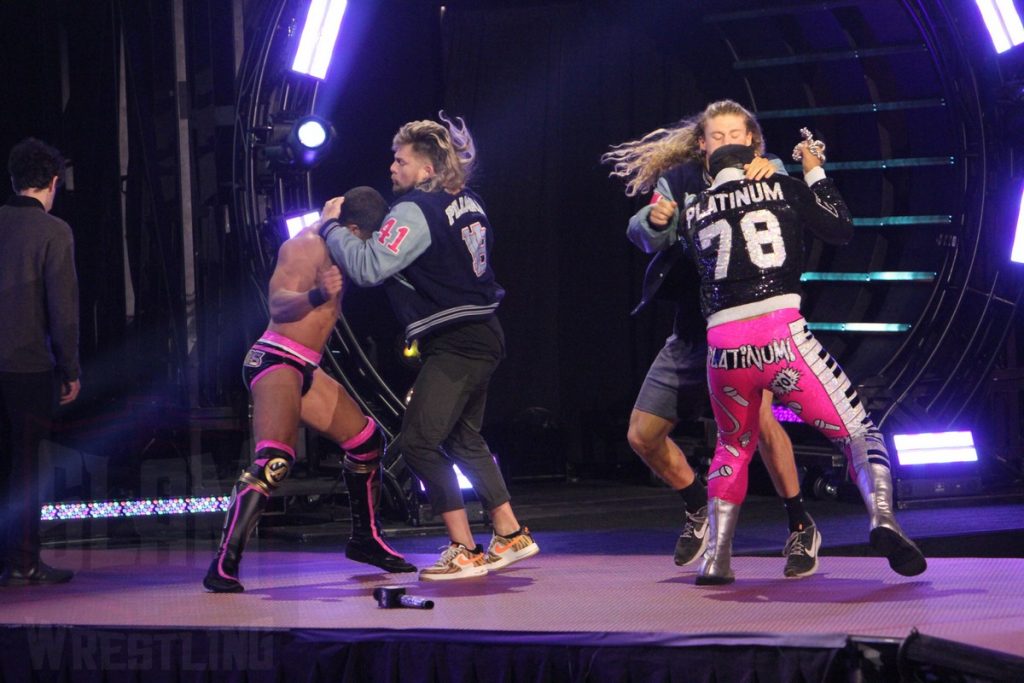 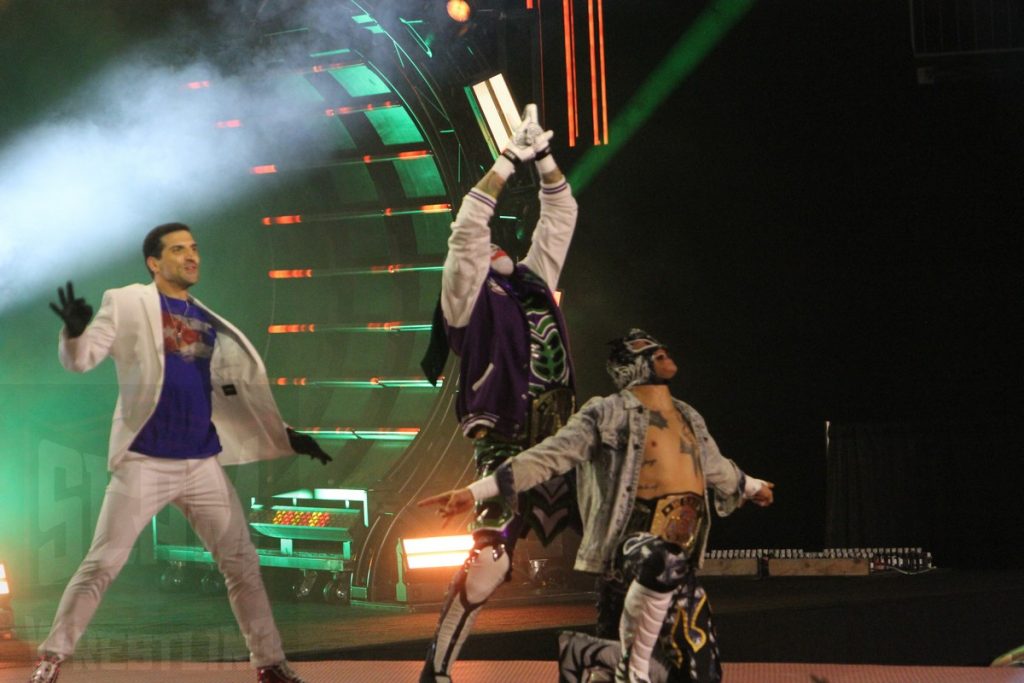 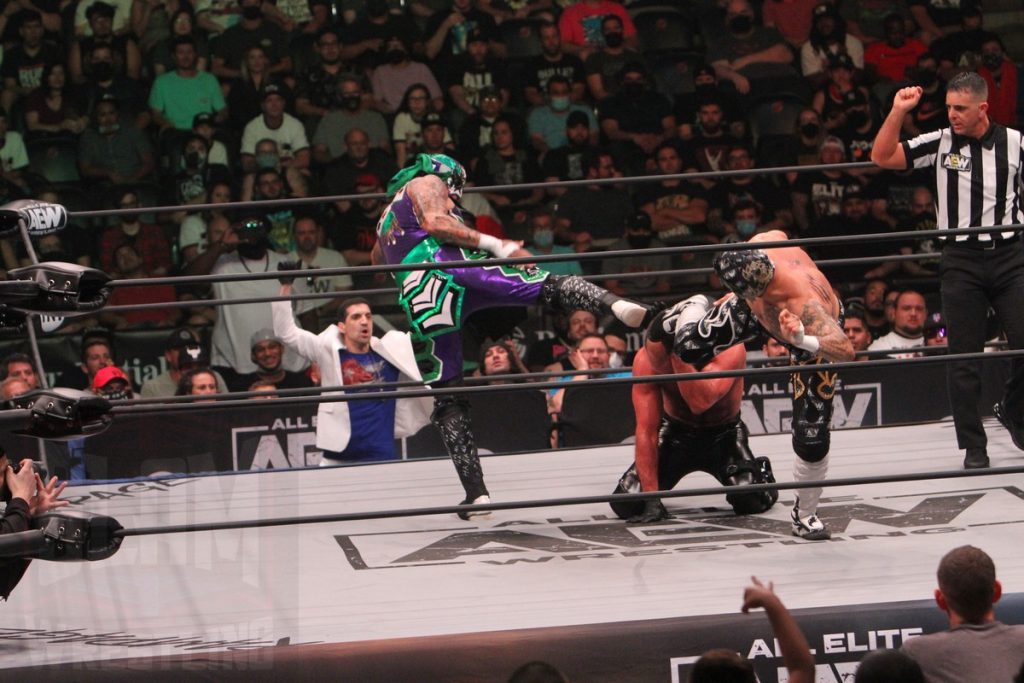 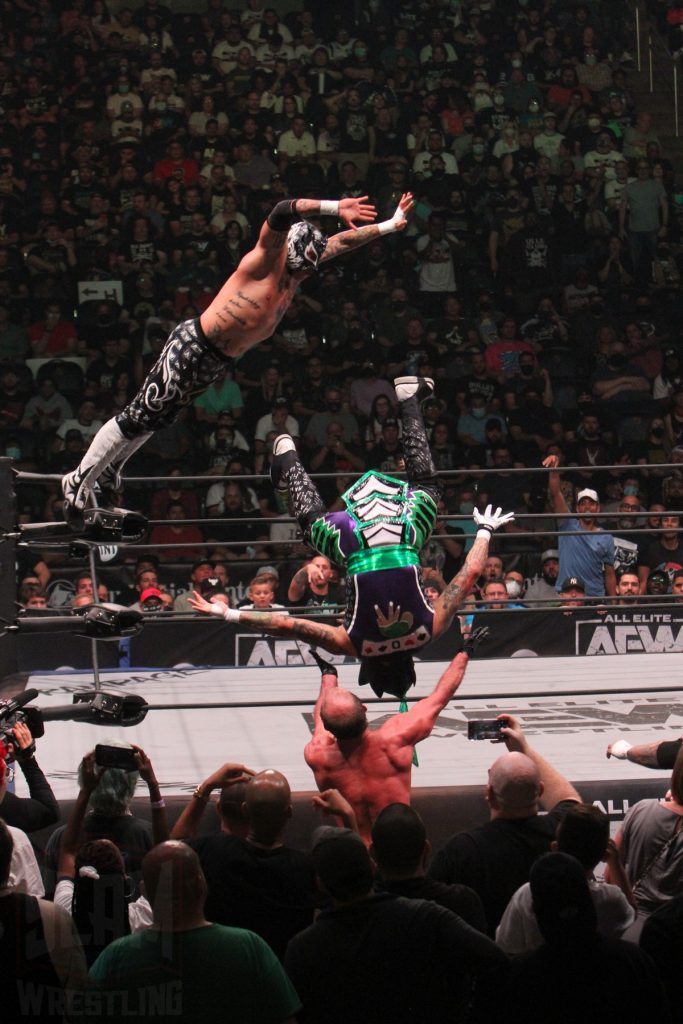 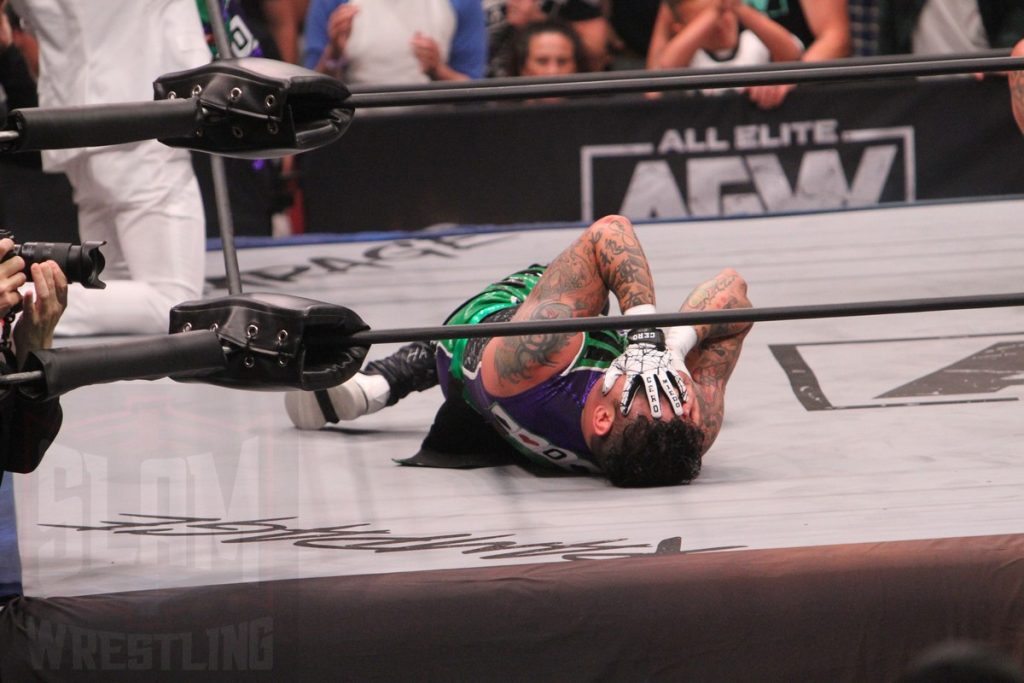 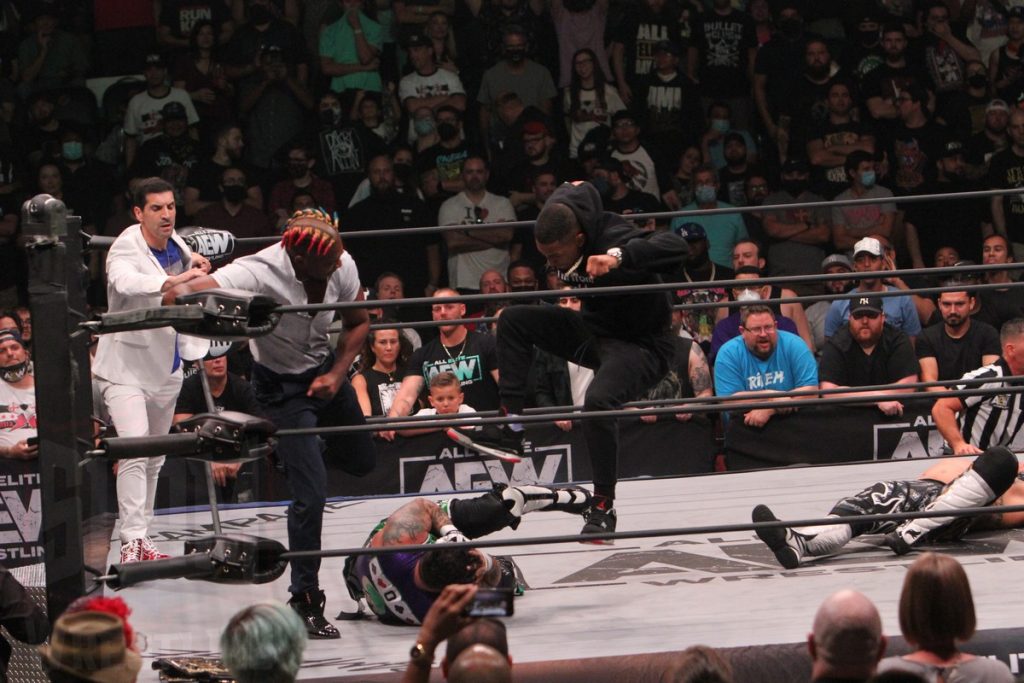 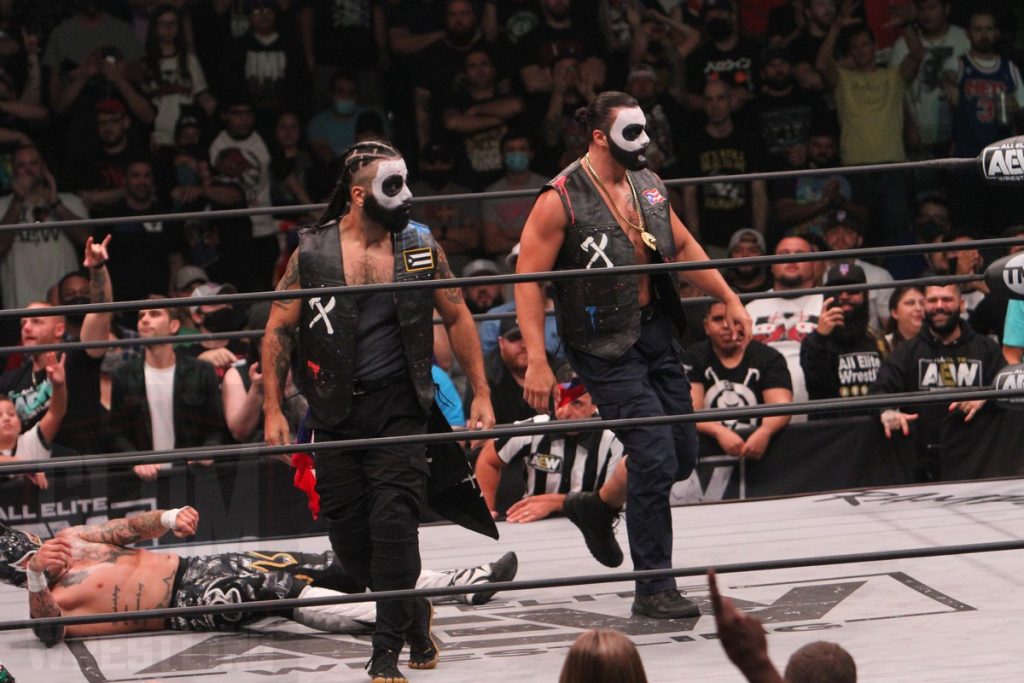 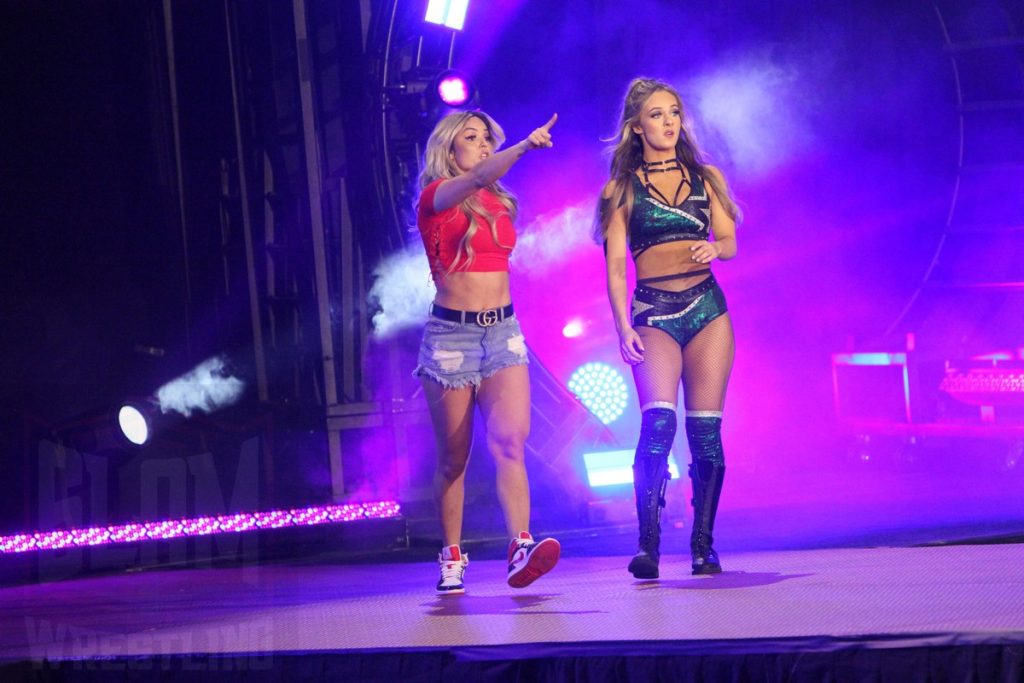 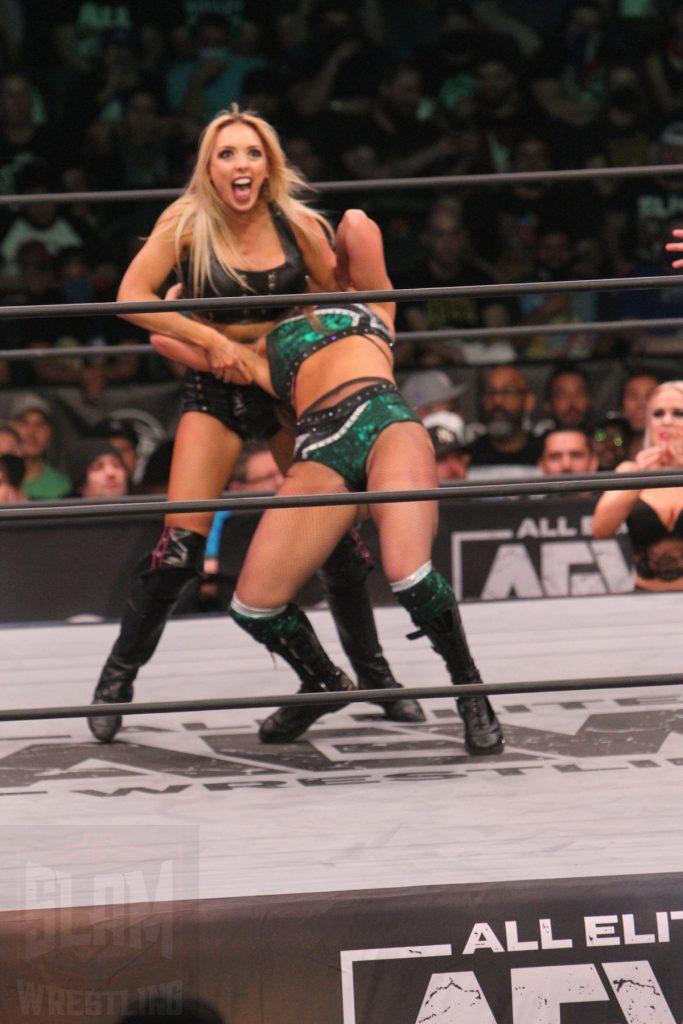 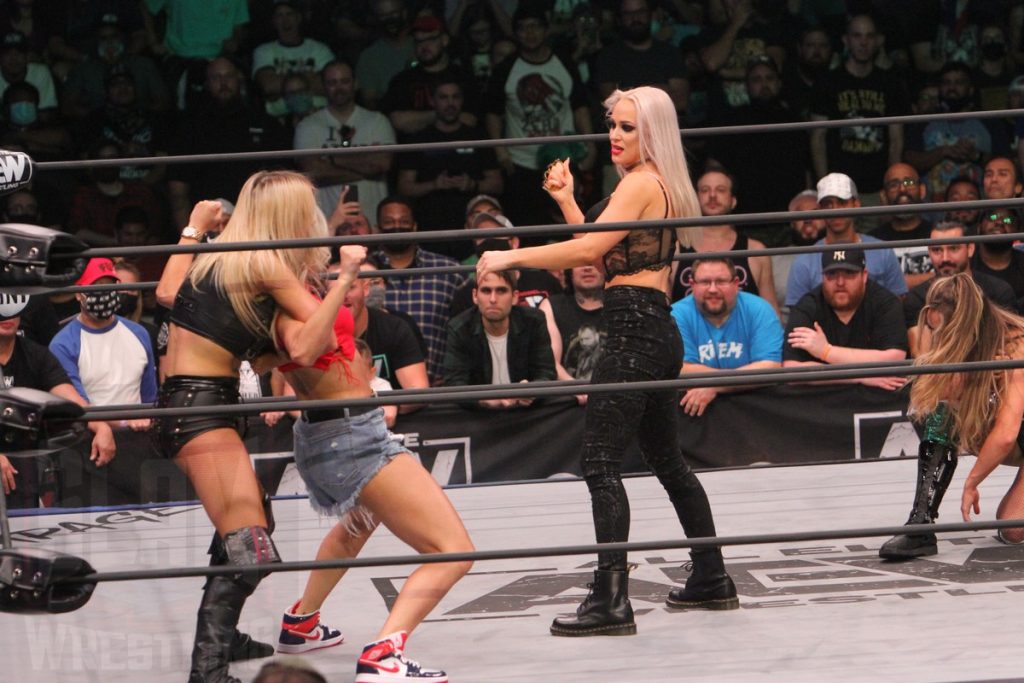 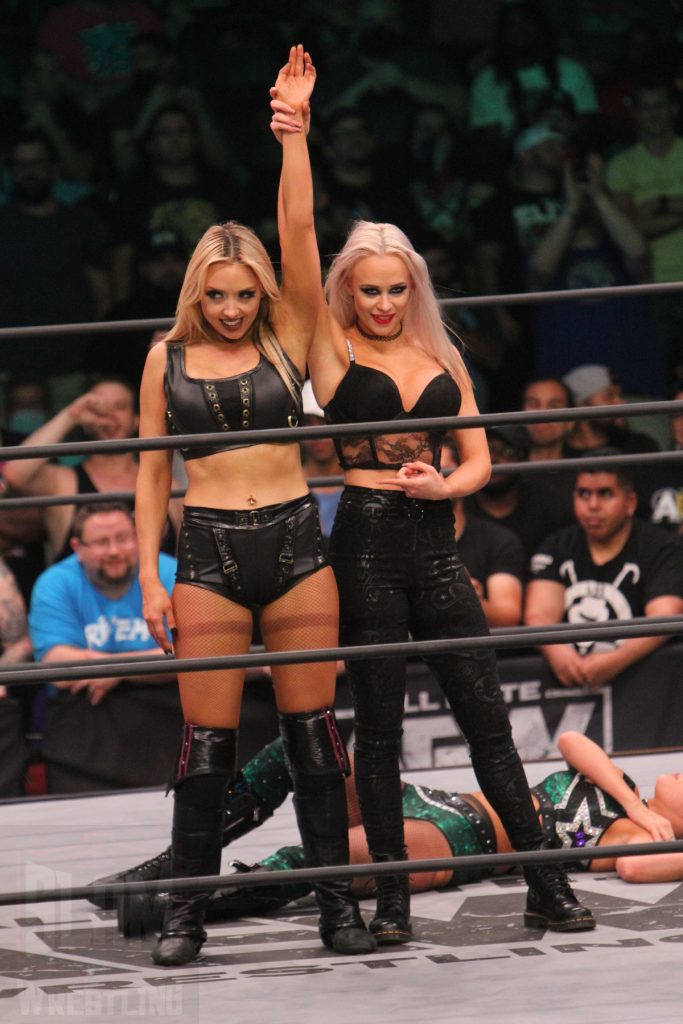 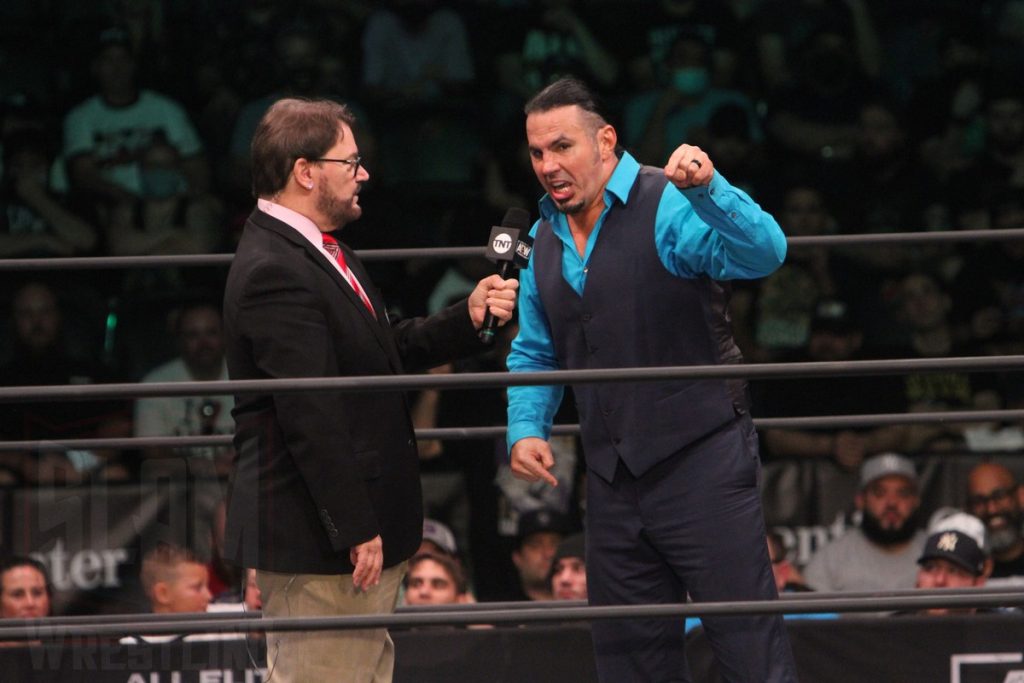 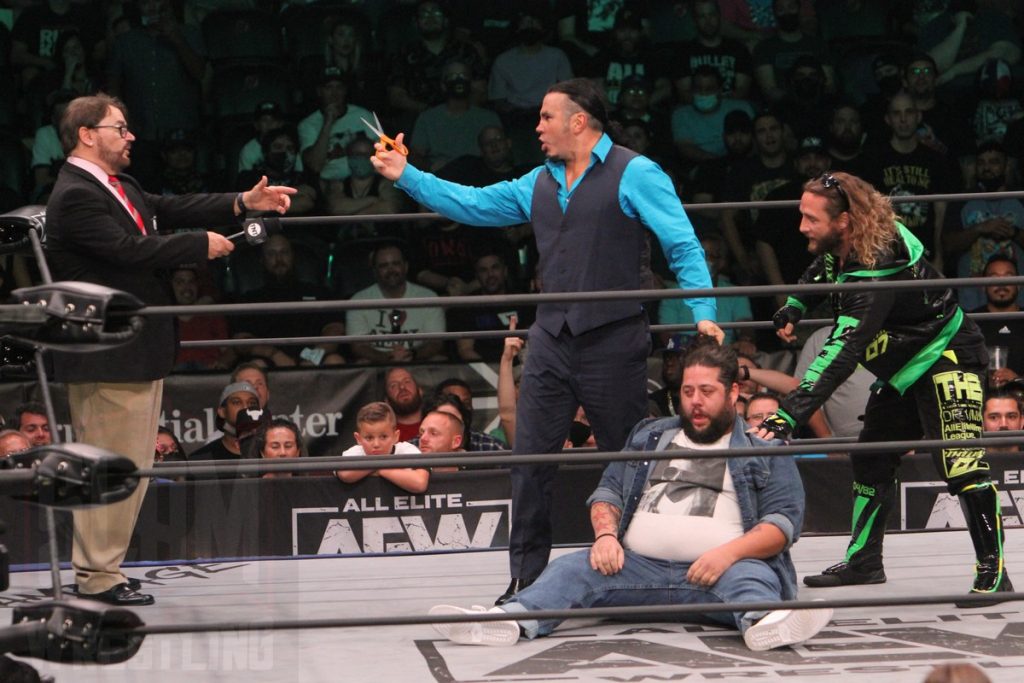 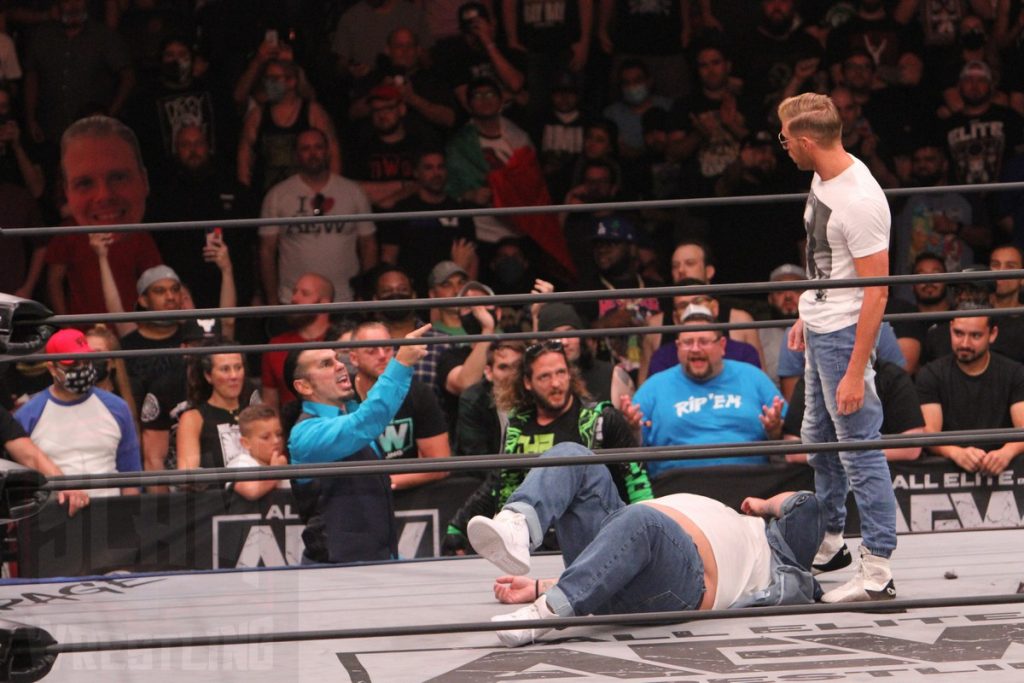 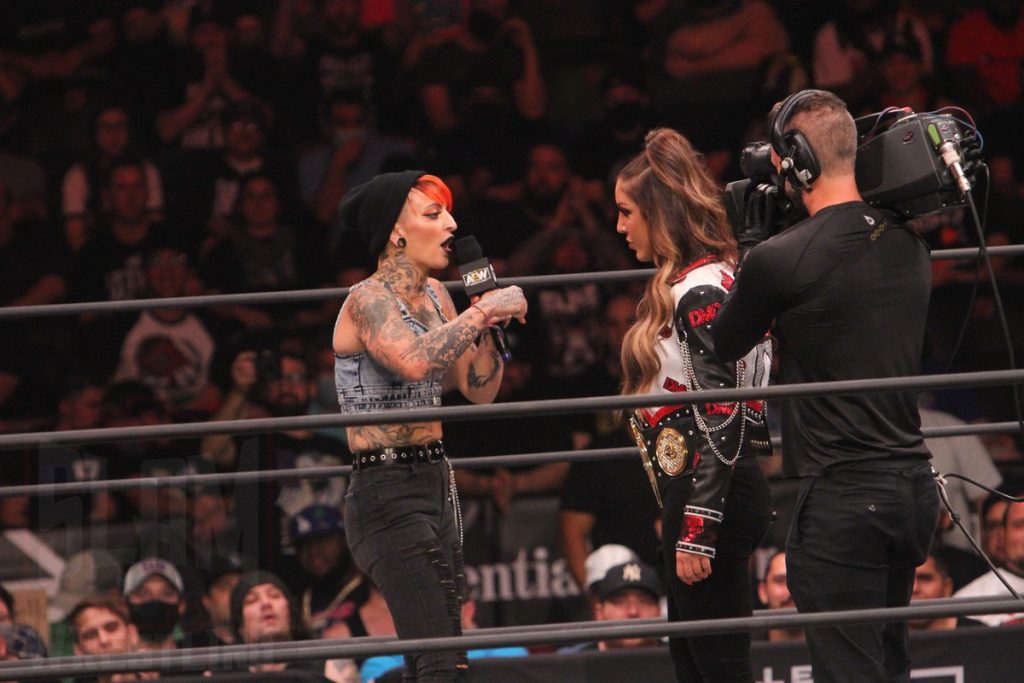 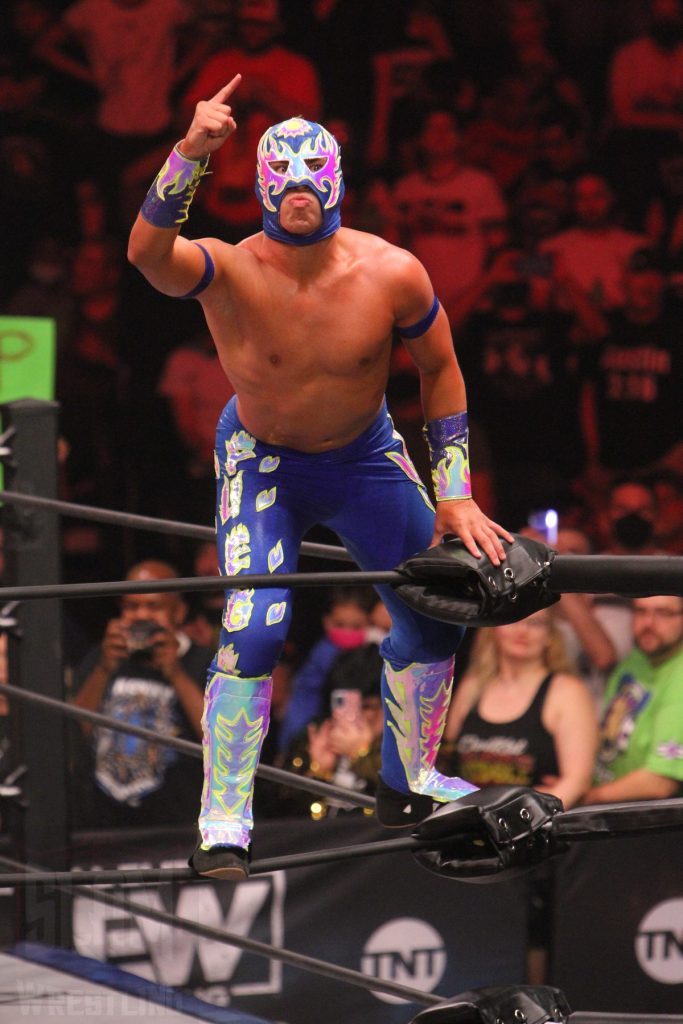 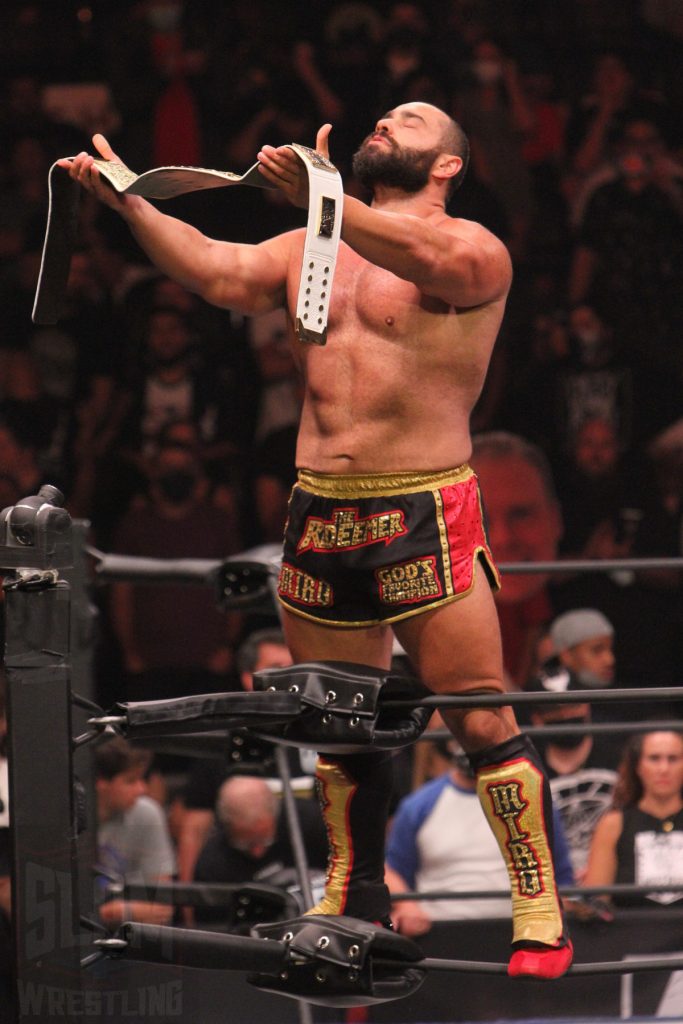 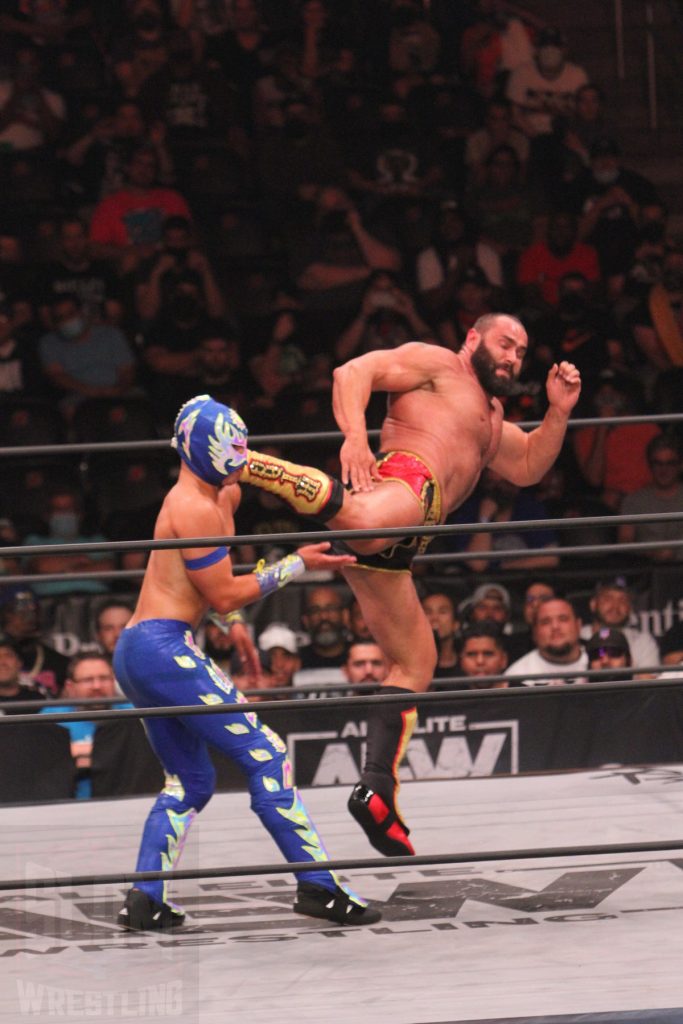 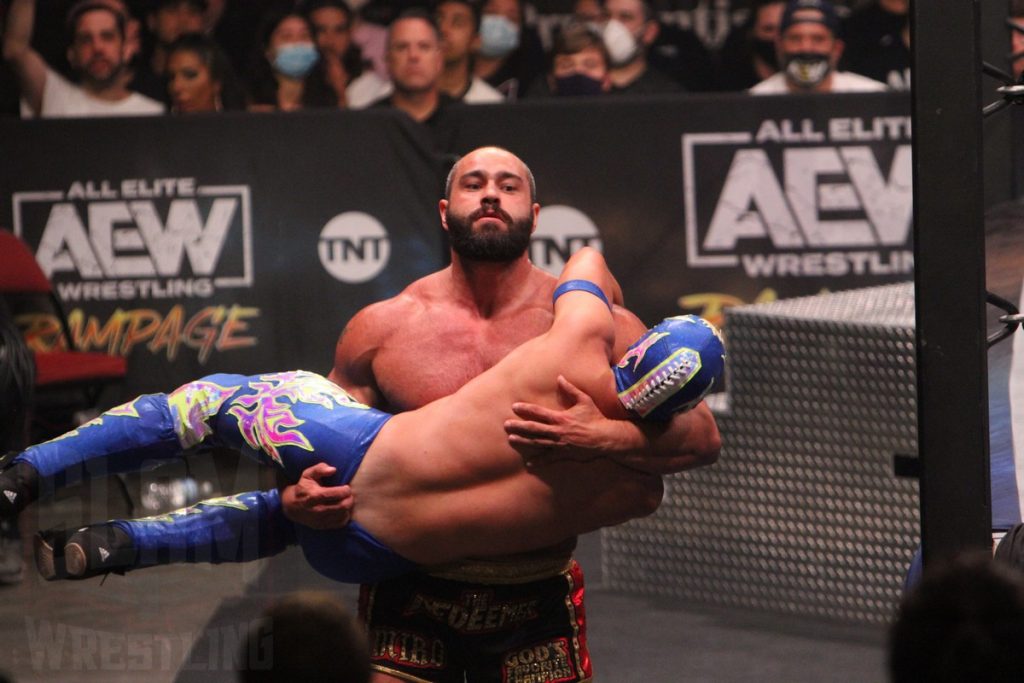 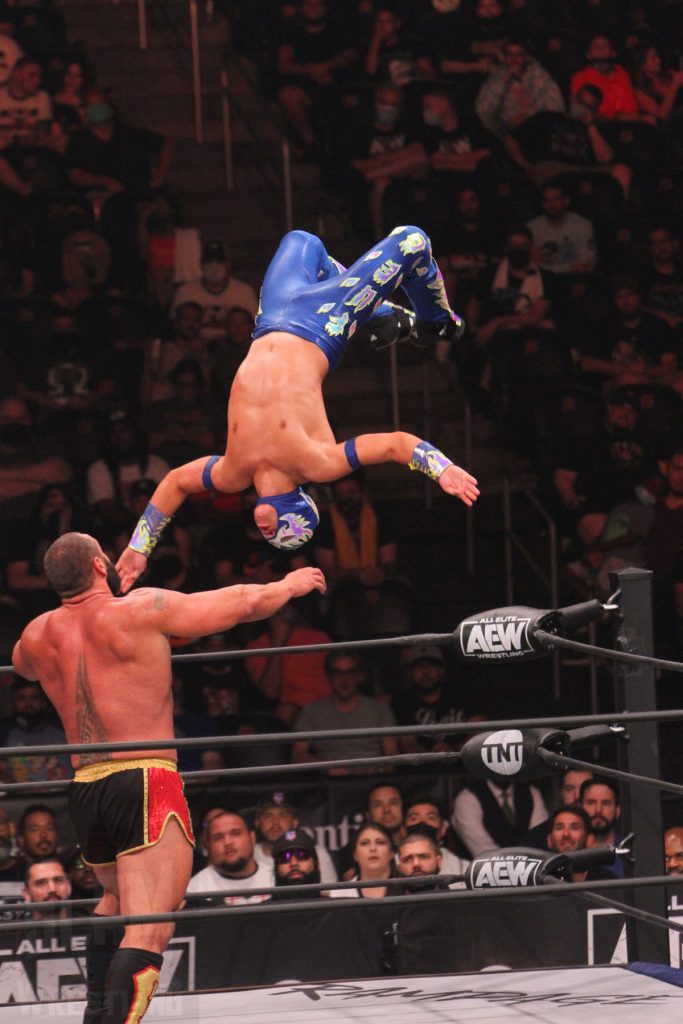 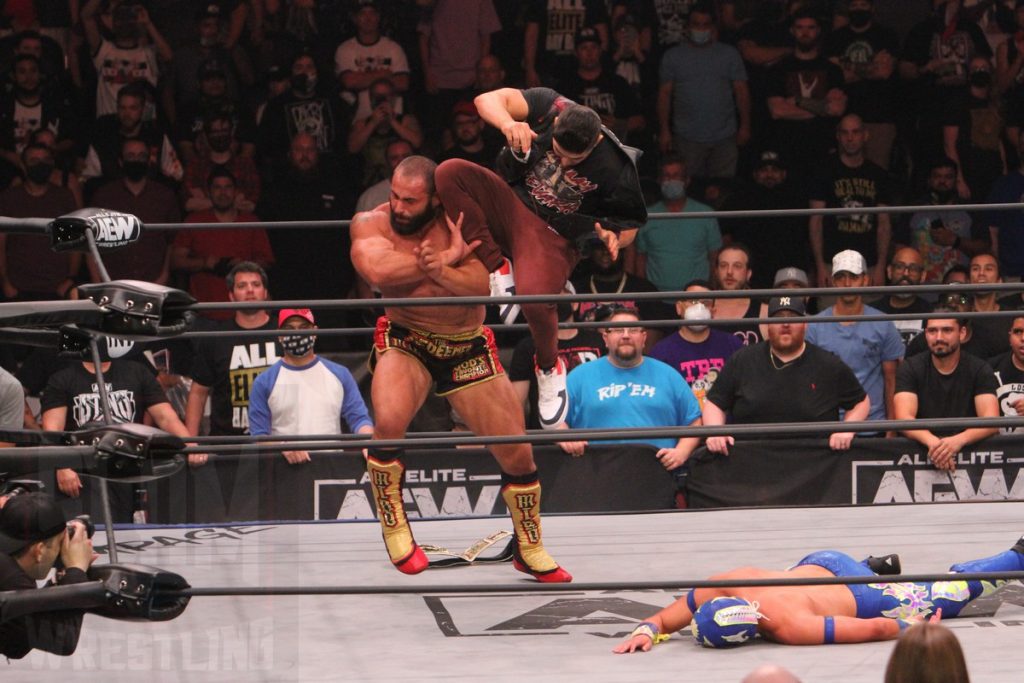 The highlight of the show was Ruby and Baker’s face-off in the middle of the ring. Love the back and forth between them. It is not that the matches were awful. They weren’t at all. It is just none of them were memorable in any way. A very pedestrian, average episode.