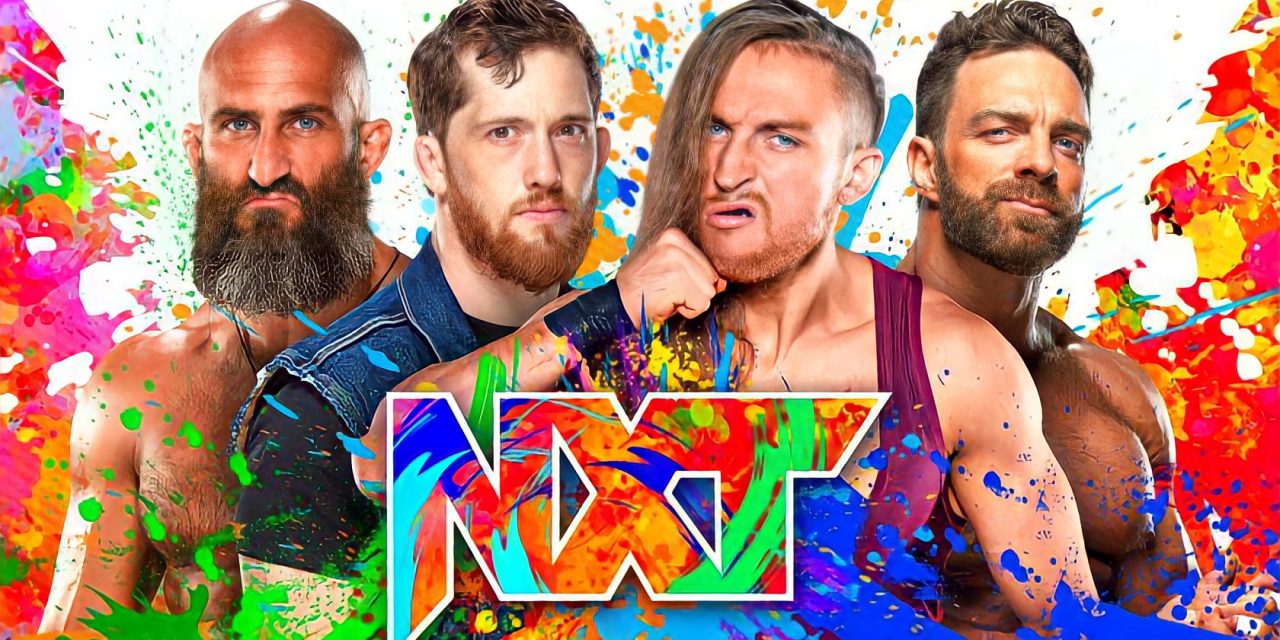 The long-awaited NXT revamp has arrived, and with it comes uncertainty. What does NXT’s future hold in regards to how WWE’s former black-and-gold brand is run? Answers will flash on-screen, much like NXT’s new color splash aesthetic and overwhelmingly bright and vibrant arena lights. Along with a different building setup and new theme song — “Down South” by rapper Wale — the revamp is at least giving NXT the refreshing makeover that it’s really needed.

The four competitors in tonight’s main event open the show with promos. Tommaso Ciampa, Pete Dunne, and Kyle O’Reilly are followed by fourth participant LA Knight, who is interrupted by a new face. Knight versus Bron Breakker is next!

Making his television debut, Breakker is the son of Rick Steiner, and his entrance music’s opening siren sounds like a tribute to Uncle Scott. Breakker and his genetic freak physique overpowers Knight, but the latter reverses and takes control. Abruptly though, Breakker connects with a massive powerslam to gain the victory. Spearheading in a new era, momentum and higher-up support are clearly behind Breakker, despite the laughably odd name change.

The notoriously metal Briggs is being repackaged as a southern brawler apparently, alongside the equally large newcomer in Jensen. Imperium battles size with technique, but Briggs and 20-year-old Jensen keep majority control. With a distraction from Marcel Barthel, partner Fabian Aichner leaps to the top, suplexes the opposition, and gains the decisive pinfall victory.

Hit Row is in-studio, rapping about female member B-FAB. “We all know that I can spit,” says B-FAB. “But the time for talking is over.”

Dexter Lumis’ groomsmen in Odyssey Jones, Cameron Grimes, Johnny Gargano, and the returning Austin Theory are dressed in murderous black. And alongside Theory is tonight’s priest — Damian Priest that is. Gargano points out that Priest isn’t actually a priest to avoid confusion though.

Samantha Irvin is in-ring to welcome the 2021 Breakout Tournament winner Carmelo Hayes, who audibly has Orlando’s support. Hayes shows confidence and suave and introduces his new muscle Trick Williams. They finish the promo, but Duke Hudson brushes by them. “This is exactly what I’m talking about. This stops today,” says Williams before he and Hayes ambush Hudson. Already, this pairing and attitude change is doing wonders for Hayes.

Backstage, Dolin and Jayne tease the reveal of the “new” Mandy Rose. During the match, footage plays of Pete Dunne and Ridge Holland attacking Kyle O’Reilly in the locker room. And it isn’t long before Rose actually appears — brunette now, and crashes the match. Sarray helps even the numbers for Catanzaro and Carter, and after commercial, an impromptu six-women tag is underway. “The TikTok tag team” — which is still painful to hear — of Catanzaro and Carter are beaten down by the opposition until Sarray goes toe-to-toe with Rose. But after a nice string of exchanges, Rose delivers a knee to Carter for three.

General Manager William Regal announces that Kyle O’Reilly is “not cleared by medical.” But taking his place, and making his thunderous NXT debut, is… Von Wagner. And the crowd goes mild.

It isn’t pretty for Maverick, but Holland’s brute strength certainly is. It’s noteworthy how great Maverick’s selling is, and his ragdoll physics come naturally with his 5’4” frame. Big Brit Holland hits Northern Grit for the one-sided victory.

Backstage, Tommaso Ciampa is asked to respond to Von Wagner’s debut. Ciampa instead talks about winning the NXT Championship, because who is Von Wagner?

Brutus and Julius Creed had an awesome debut showing last week, and Jarmon and Skelly are this week’s prey. The intensity between them is enthralling, and Julius puts it away. Diamond Mine has been revived, and Roderick Strong and Malcolm Bivens have The Creed Brothers to thank. But another member has been added: Ivy Nile, who “hasn’t had a carb since 2005.” Bivens is hilarious but “talks too much” according to NXT Cruiserweight Champion Kushida as he interrupts the segment. Next week, it’s finally going down between Kushida and Strong.

Commentary takes a moment to ask Beth Phoenix about husband Edge’s condition. Edge was taken out by Seth Rollins on Friday, but Phoenix would rather talk about tonight’s main event — which is next!

Newcomer Wagner receives a pretty silent reception whereas NXT veteran and staple Ciampa gets a standing ovation. After an opening scramble, the latter and Dunne trade blows until Wagner steps in and dominates before commercial. Whose idea was this? Back from break, Ciampa makes his signature comeback and fires up the crowd. Knight hits his finisher on both Dunne and Wagner, but Ciampa hits Willow’s Bell on the former. He, notably, hits the first outside dive of the night but thereafter gets dropped by Dunne’s Bitter End. Knight is busted open badly as Ciampa and Dunne exchange strikes but manages to suplerplex the latter. Breaking the pin and hitting The Fairy Tale Ending is Ciampa, who gets the victory and wins the NXT Championship!

A lengthy recap plays, and a dressed-up NXT locker room awaits the climactic InDex wedding. Back from break, the brideswomen and groomsmen are in position for the entrance of Indi Hartwell, with father Johnny Gargano by her side. “Austin, you got the rings?” asks Gargano. “We’re in the ring, silly!” says Theory. Luckily, Ikemen Jiro, who’s wearing just a blazer, has the actual rings.

The priest offers a chance for someone to object, and quite literally everyone raises their hands before Lumis reveals an axe inside his jacket. “Serves you well!” Gargano shouts out! And so, Hartwell shares her heartfelt vows, and Lumis gives a loud and deafening thumbs up before putting the disapproving priest to sleep.

But Beth Phoenix makes the save, revealing that she got ordained as a minister just last night; “Let’s cut to the chase,” says Phoenix. A mishearing Andre Chase stands up, but big man Odyssey Jones sits him back down. Finally, Hartwell says “I do.” Lumis says his first words — “I do” — to a legitimately wild reaction and kisses the bride. Long live InDex!

Headlined by one of wrestling’s best weddings ever, the debut episode of NXT 2.0 was a big success from a viewer standpoint. The pacing and structure was quick, the matches were efficient, and multiple characters got to shine. If certain kinks are sorted out — such as whatever Von Wagner is supposed to be, the NXT revamp will be a definite positive for the brand.