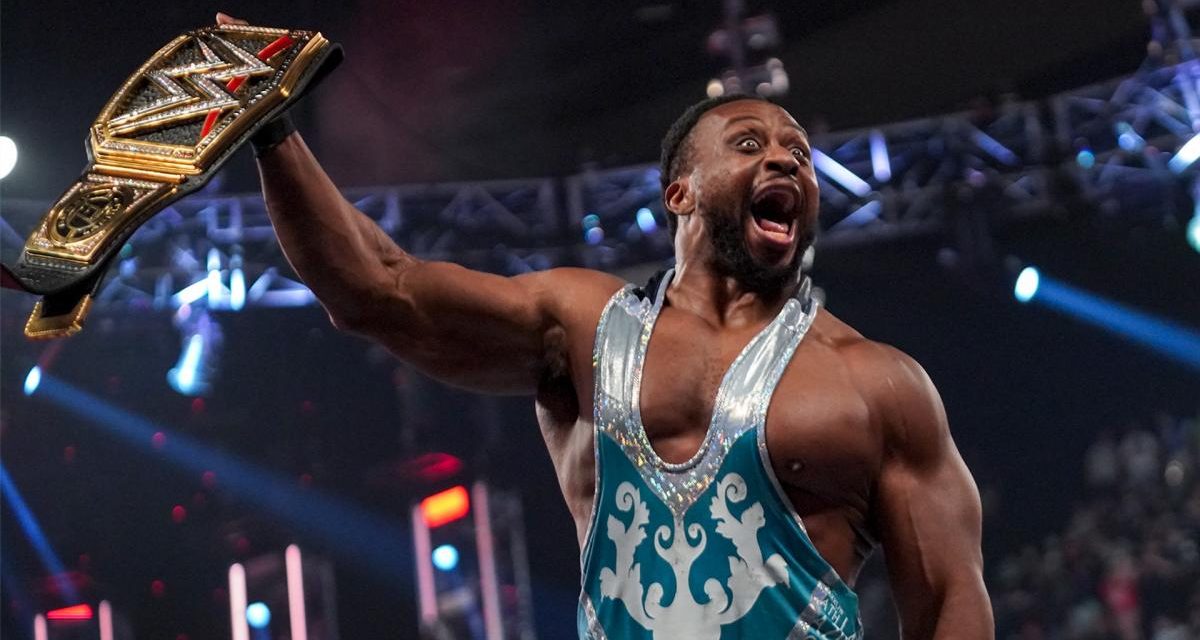 WWE has been making a habit of announcing things that would normally be a surprise on Monday Night RAW. Not only are we getting a WWE Championship match tonight between Bobby Lashley and Randy Orton; Mr. Money in the Bank, Big E, will also be appearing on tonight’s show. Let’s head to Boston and get this show started.

Big E kicks off the show with briefcase in hand, followed by Randy Orton and Riddle. The WWE Champion, Bobby Lashley, walks to the ring with MVP. Big E wants to clear up any confusion, saying he fully intends to cash in the briefcase, tonight. Riddle doesn’t want him to cash in on Randy, but MVP says that won’t be a problem since Lashley is going to win tonight. He then accuses Orton of politicking to get the WWE title match moved to tonight from Extreme Rules.

Orton had the date changed to throw Lashley off. Big E loves the standoff. The three go back and forth about who is winning the title tonight. Big E gets it Lashley’s face, allowing Orton to hit an RKO out of nowhere on the champ.

Before the match, Charlotte wants to teach Shayna some humility and has to learn that dead weight will drag her down. Flair calls the ring her throne.

Earlier in the day, Nia Jax confronted Baszler for costing her a match against Flair last week. Jax wanted to get on the same page, but Shayna just walked away.

Flair dodges a sliding kick and Baszler hits the floor. Charlotte launches herself over the top rope to take her out. Flair dominates Baszler, until the Queen goes up top. Shayna turns the tide by yanking her off the ropes. She follows with a German suplex.  Flair looks for a fall away slam, but Baszler is able to land on her feet and connects with a kick. Shayna is sent to the floor and Flair hits a moonsault. Nia Jax then makes her way to ringside. Baszler takes advantage of the distraction, slamming Flair into the ring steps.

After a commercial break, Baszler is hit with a chop block and then put in a knee bar over the ropes. Baszler connects with a knee in the corner. Jax jumps to the apron, stopping Baszler in her tracks. Flair hits a running boot and covers to the get the pin.

After the bell, Alexa Bliss walks out with Lilly. Awwwww, she has a gift for Charlotte. It’s for accepting her challenge at Extreme Rules. Flair isn’t impressed, because she collects championships. Bliss just wants Flair to have some fun and take the gift. She refuses, but Bliss is insistent. Charlotte finally accepts; it’s a doll dressed as Flair, named Charly. Well, the Boston crowd loves it. Flair does not, but will indulge Bliss. She throws the doll at her and Alexa attacks. Flair hits the floor, but still wants to fight. Bliss hits her with a Code Red and that stops Flair.

Drew McIntyre and the Viking Raiders vs. Jinder Mahal, Shanky and Veer

Drew gets jumped and Erik and Ivar have to hustle to the ring to save their partner. The pre-match beatdown doesn’t do much though. McIntyre finishes the match with A Claymore to Shanky. He covers to get the win.

Winners via pinfall: Drew McIntyre and the Viking Raiders

Big E reunites with Kofi Kingston and Xavier Woods backstage. They are super excited for him to cash in tonight. Big E asks Kofi for some advice. Kofi tells him he knows what to do. Woods knows his boy needs to relax and the three start to sing.

Reggie successfully avoids R Truth, Tozawa and company that are after his 24/7 Championship. Truth yells at Drake Maverick that his plan didn’t work. Drake blames the execution.

Before the bell, Sheamus, who is slated to take on Priest at Extreme Rules heads to ringside and joins the commentary table.

Priest and Sheamus jaw at each other during the match, but it’s not enough to distract the US Champ. Priest counters a Twist of Fate into the Reckoning and covers to get the pin.

After the match, Sheamus attacks Priest and Hardy. A Brogue Kick sends Hardy to the floor, but Priest is able to defending himself, kicking Sheamus out of the ring.

Nikki A.S.H. wants to come up for a celebration when she wins with Rhea Ripley, but Ripley would rather focus on winning the tag team titles. Natalya and Tamina are not impressed and all four women brawl. Sonya Deville breaks up the fight and books Nikki in a match against Tamina.

Back in their locker room, Big E lets Randy Orton that he will be watching his match very, very closely.

Tamina decks Nikki at the bell and tosses her across the ring. Tamina pummels her in the corner. Nikki gains some space with a low drop kick. A clothesline sends Nikki to the mat hard. The two trade shots and Nikki gets the worse end of the exchange. Nikki struggles to get her feet, but is able to deliver an elbow strike. A head scissors takes Tamina to the mat and Nikki hits ten punches in the corner. Tamina runs into a boot. Nikki goes up top and delivers a tornado DDT. Nikki covers and gets the pin.

After the bell, Tamina attacks Nikki and Natalya takes out Rhea. Tamina slams Nikki into the barricade.

Got to love joining a match in progress. Nikki is being treated in the back after getting beaten up after her match. She determined to help her partner, though. Tamina tries to get involved and Nikki runs down and trips Natalya. She then saves the match, by pulling Rhea’s foot onto the ropes. Ripley head butts Nattie and locks in a cloverleaf. Natalya taps out.

Charlotte Flair has no interest in talking with Sarah Schreiber. The Queen gives her the hand, but then goes off about the doll Alexa gave her. Flair slams the doll into the trash.

It’s been a while since we had an eight man tag, but that’s a good thing. Omos tags himself in and Ali wants no part of him. Omos tosses him across the ring. Mansoor leaps on Omos’s back while Woods and Kofi grab his legs. Omos sheds all three men. The vertical chokeslam to Ali gets him the pin.

MVP lets Kevon Patrick now that Lashley is not distracted by the presence of Big E. He’s more of an annoyance. Big E boos that answer, but he isn’t playing when he says he will cash in the contract, tonight.

Eva avoids Doudrop at the bell, landing shots of her own. Eva then runs into Doudrop and hits the mat. Eva avoids the corner splash. Doudrop with a head butt and then crushes Eva in the corner. Eva rakes the eyes, but doesn’t even have the power to roll Doudrop up. Doudrop with a cross body and covers to get the win.

Karrion Kross cuts a promo in the back. To sum it up; he is going to pulverize everyone.

At the opening bell, Orton slips out of the ring, playing mind games with the champion. On the floor, Lashley gets distracted by Riddle. Orton hits him from behind and slams him into the ring steps and then the barrier. Orton gets him back in the ring, but can’t get the pin.

The champ shoulders Orton into the corner, but then misses a spear and crashes into the ring post. Orton looks for the draping DDT, but Lashley counters with a back body drop, sending Orton awkwardly to the floor. Orton is ready for the champ, slamming him into the barricade and dumping him into the time keepers area.

After the commercial break, Orton has the champ on the top turnbuckle and hits a superplex.  Orton covers; Lashley kicks out. On the floor, Lashley slams Orton into the ring post. MVP taunts Orton on the floor. Lashley knocks Orton off the apron and into the security barrier. The champ rolls Orton back into the ring and spears him in the corner. He follows with a neck breaker, but Orton kicks out. Orton with a clothesline and mounts Lashley in the corner, raining down punches. He follows with a power slam, but Lashley kicks out.

Orton hits the draping DDT and starts to stalk the champ. He taunts MVP and is ready to strike. Lashley blocks the RKO and hits the spear. Orton kicks out. Lashley looks for the Hurt Lock and Orton does everything he can to fight it off. An elbow strike breaks Orton out and he hits an RKO. Orton looks for the pin, but MVP yanks Lashley over to the apron.

Riddle an MVP argue, allowing Orton to hit MVP with an RKO. Lashley catches Orton with a spear as the Viper gets into the ring. Lashley covers and gets the pin.

After the bell, Lashley attacks Riddle, slamming him into the ring post. Lashley runs his attention back to Orton, slamming him through the announce table. Lashley comes up gimpy after slamming Orton.

Big E runs down with a referee and he is cashing in the Money in the Bank contract.

Lashley refuses to defend his title because of his injured knee. Big E slaps him. The ref rings the bell and Lashley pounces. Big E takes out the injured knee, but can’t hit the Big Ending. Lashley connects with a spear, but E kicks out. Big E floats over Lashley, picks him up and delivers the Big Ending. E covers and gets the three count.

Kofi Kingston and Xavier Woods run down to celebrate with their boy. Big E is your new WWE Champion.

The only thing I care about on Monday Night RAW is RKBro and the WWE championship and they are all intertwined. The first segment set up the main event, making everything in between just filler. WWE knew this two, why else would we get a 6 man tag match and and 8 man tag match. Although, Charlotte Flair and Alexa Bliss are entertaining. And RAW may have set a record tonight with four women’s matches.