SmackDown: Reigns must face his demons 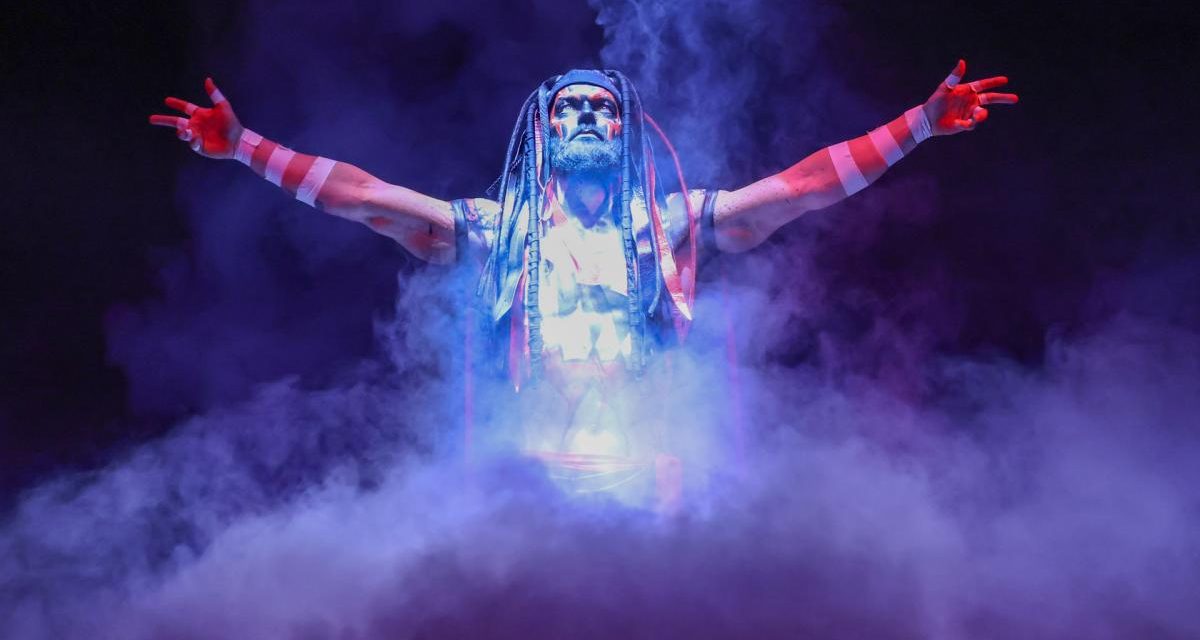 Roman Reigns, The Usos, and Paul Heyman open up this show in front of an electric crowd in Madison Square Garden, with the majority seemingly behind the Universal Champ. Reigns employs a syllogism to point out that since the WWE runs wrestling in New York, and he runs the WWE — Roman Reigns therefore runs New York.

The crowd agrees, but the tone changes when Brock Lesnar’s music hits. When Lesnar enters the ring and stands toe to toe with Jimmy and Jey, he asks Heyman why he didn’t inform the tribal chief that he would be at SummerSlam. Reigns looks disgusted with Heyman and leaves the ring with the Usos in tow.

That leaves Lesnar and Heyman alone, and Lesnar demands that, before Reigns presumably fires Heyman, he accept Lesnar’s challenge for the Universal Championship — and he gives him five seconds to do it. Upon reaching five, Lesnar hoists Heyman up for an F5, but The Bloodline comes back into the ring to break it up, although the Usos predictably take the worst of the ensuing exchange.

After the break, Heyman nervously answers Kayla Braxton’s question as to when Reigns will respond to Lesnar’s challenge (the answer is: when he’s ready).

Zayn, decked out in a Knicks jersey and “I Love NY” pajama pants, says he has arranged for a special guest, someone who knows how to win in New York — and it’s Trae Young of the NBA’s Atlanta Hawks (who trolled Knicks fans after helping to eliminate their team from the playoffs in the spring).

This match, as per usual in this type, is a mess. Nakamura starts things off and is beaten around by Otis as we go to break (which features a commercial for NXT 2.0 — regardless of whether the new show is a success or not, 1.0 will be dearly missed). Back from break, Rey Mysterio tags in and runs circles around Zayn before we do the bit where every wrestler steps in to do some signature moves, finally ending with Rey readying a 619 on Roode, but it’s interrupted by Zayn. 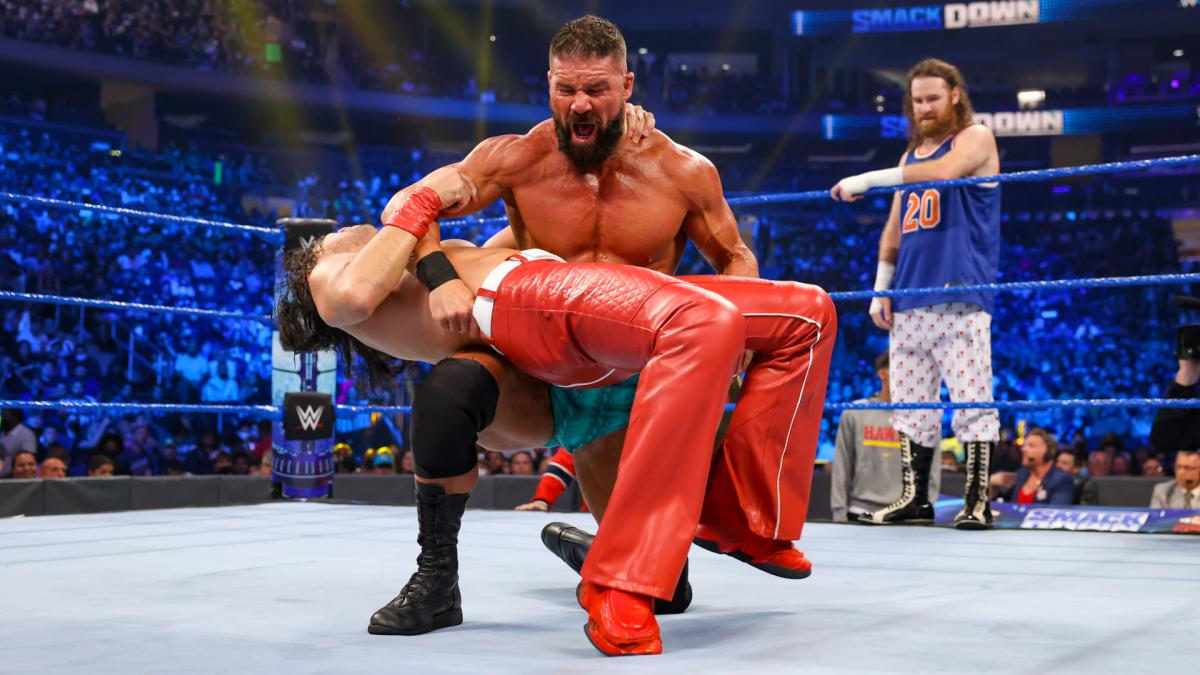 Roode seems to be taking things seriously. Zayn, not so much. Photo: WWE

With the ref distracted, Trae Young gets his hands dirty by choking Mysterio on the ropes, but the ref eventually catches sight of it and throws Young out, to the great pleasure of New York. The Mysterios hit Zayn with a double-619, and Langston finishes the match with a Big Ending.

Next up is a contract signing between Bianca Belair and champion Becky Lynch, which features the further re-writing of Lynch’s return into a heel character as she sports ridiculous sunglasses and a big, red, fur coat, and asks what would happen if she didn’t sign it. The crowd gets on her, and she hits back at them for supporting Belair more than her. Lynch signs angrily and the match is made.

After the break, Heyman is startled by Braxton again looking for an update. Heyman says the answer is coming later tonight.

Rollins opens with an offence focused on Edge’s legs and knees, and Edge counters by zeroing in on the shoulders and neck. Rollins uses a high knee to send Edge out to the floor, following with a suicide dive going into commercials.

Back from break, Rollins lands a springboard knee to the head and earns a two-count. A decidedly un-glamorous Glam Slam by Rollins is followed immediately with an improved version. Rollins tries a Pedigree, but Edge reverses and hits his own for another two-count.

After another break, Edge is climbing up to the top turnbuckle, and although Rollins sticks a leg up to thwart his leaping attack, Edge wraps him in the Edgecator, forcing Rollins to roll his way out of the hold. Edge hits an Edgecution soon afterwards, but his attempt at a spear is reversed into a swinging neckbreaker.

Rollins tosses Edge into the corner with a buckle bomb, but when he tries a running attack to follow, Edge hits him with a close-quarters spear for a close two-count. With the ref caught behind both wrestlers, Rollins sneaks in a low blow, followed by three superkicks and a stomp for a victory. 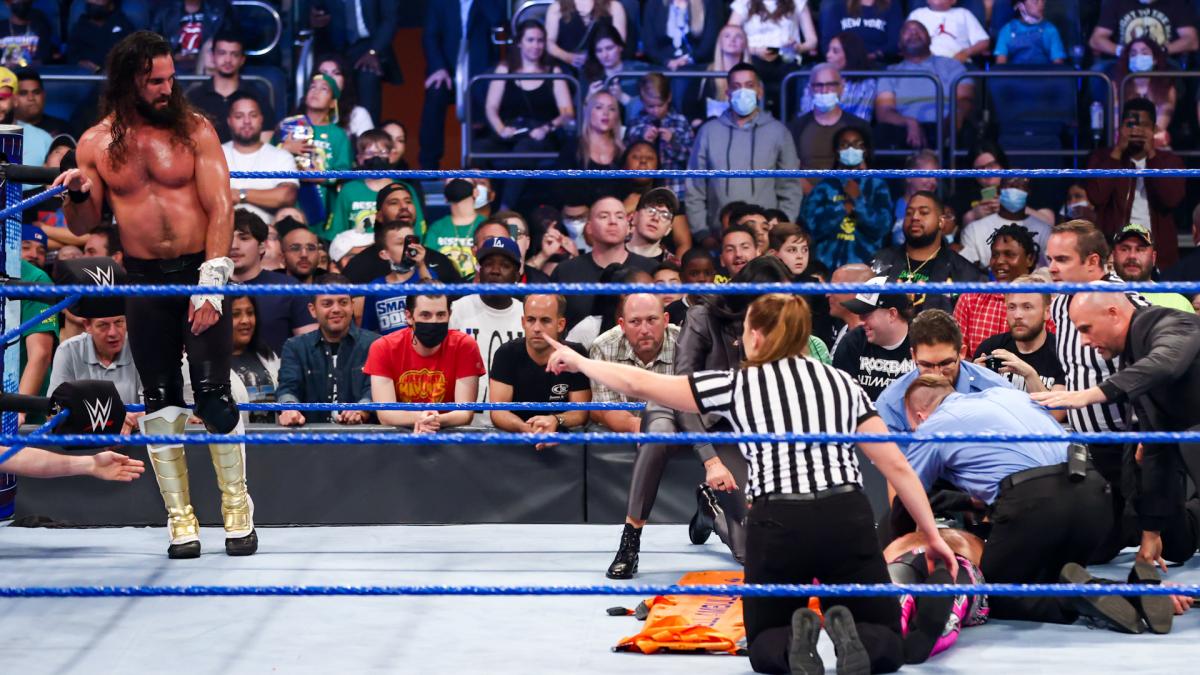 Rollins shows something (remorse or concern?) as Edge is attended to after the match. Photo: WWE

After the break, as Edge is taken away by ambulance, Rollins is asked how he feels. He says that maybe he doesn’t feel anything.

Montez Ford hits a dropkick, and Jimmy Uso responds moments later with a suicide dive, and then we get a commercial. We got to see the full entrances for both teams, though. Back from break, the Usos are quick-tagging and breaking Dawkins down until he dodges a leg drop from Jey and clotheslines both Usos over the top rope in turn. Ford tags in and dives over the top rope onto the tag champs, at which point Reigns makes his way down the ramp to watch more closely.

After another break, Ford is in charge before losing his shoe and tossing it out into the crowd, fighting the rest of the match like the squared circle Shoeless Joe. The Profits seem poised to win before Jey catches Dawkins with a superkick. It only gets a two-count, so they try two more superkicks and an Uso splash, but it’s only worth two again.

Since someone kicked out of a finisher, the crowd responds with a “This is awesome” chant. You know what’s not awesome? Ford lands a splash on Jimmy for the certain win but Reigns slides into the ring and breaks up the pin, causing a disqualification.

Reigns has Ford in a guillotine while the Usos beat up Dawkins on the floor. Reigns grabs a mic and says he accepts Lesnar’s challenge — for after he’s done smashing Finn Balor.

Guess who has something to say about that: Finn Balor — in Demon form. He makes his entrance and stares down the champ in the ring, silently announcing that he will bring his dark persona to Extreme Rules.

Two good matches, an invested crowd, and maybe just a little too much Demon (that’s a lot of make-up to put on for a minute-long staredown), this show moved the needle of interest in Extreme Rules in the right direction.