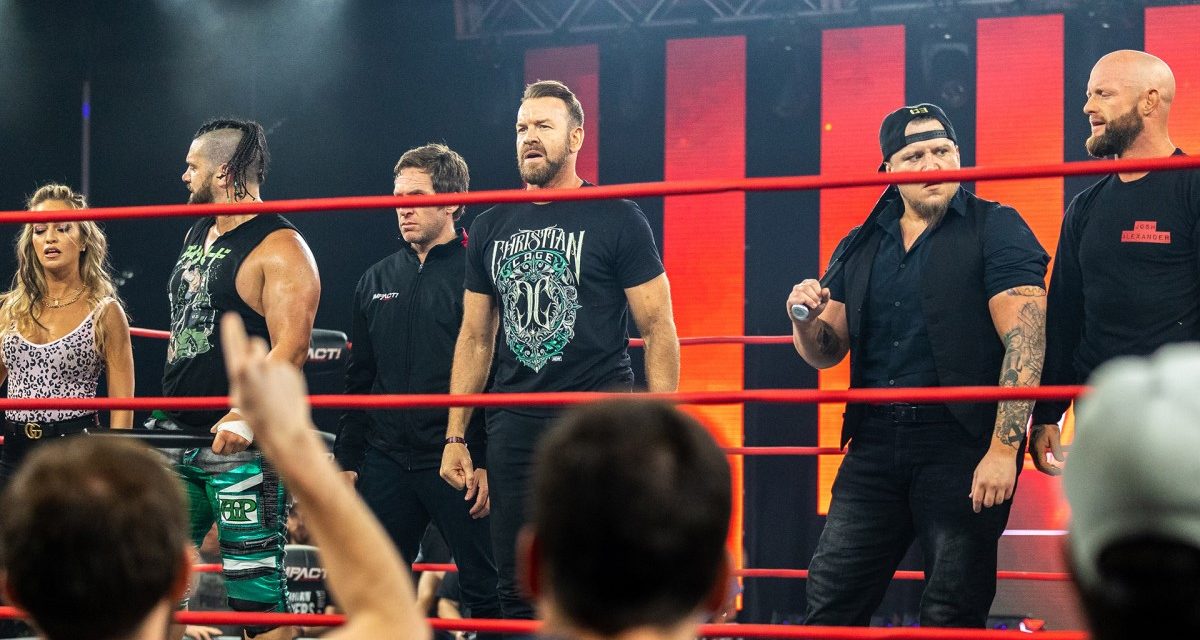 The penultimate go-home show before Victory Road features lots of set-up for the big event, the forging of some unexpected alliances, and a wild finish to the episode. In another pinch-hitting assignment for our regular IMPACT reporter Bob Kapur, Dave Hillhouse takes a stab at jumping into the middle of the IMPACT storylines and making sense of them. It shouldn’t be too hard — although the last time he watched IMPACT, the ring had six sides…

Immediate action opens the show, and the match opens with a quick pinfall attempt by Steelz, but Rosemary kicks out easily and counters with a bite to the side of Steelz’s head. She soon has Steelz down on the mat and tries a screaming dropkick off the top rope, which Steelz easily dismisses, followed by a Supergirl’s Punch (not called that, but it had the lock and load pander and everything).

Steelz doesn’t do much to take advantage of the downed Rosemary, only hitting her with jabs and punches, and Rosemary fights her way back and earns a sudden win with a spear.

As Decay celebrate, Steelz and Evans abscond with the Knockout Tag Team championship belts, forcing Decay to chase them into the back. Ace Austin gets some interview time and scoffs at the notion that he’s not prepared for his upcoming title match against Christian Cage. He leaves the interview area abruptly and talks to Scott D’Amore, pitching a match between Cage and Madman Fulton next week. D’Amore expands on the idea and says there will be an “Attitude Era” style 10-man main event match next week ahead of Victory Road, and they’ll both be in it along with Cage.

Austin is not pleased, but he immediately begins building his team. He recruits Bryan Myers to start off.

A strange vignette featuring Rhino and Eric Young shows Young musing philosophically as Rhino is released from jail. I think I missed the backstory. In the end, Young baptizes Rhino and takes him into his crew.

Swann wastes no time, diving into the ring mere seconds into his entrance, then diving out again and momentarily eliminating Gallows from the equation. Swann uses a garbage can lid to further knock both Good Brothers around. Despite a low-blow kick to Anderson on the floor, eventually the numbers catch up to Swann and he takes several shots from Anderson with the trash can lid.

Back from break, Anderson is setting up a chair wedged in the corner, but moments later he is run into the chair before regaining advantage and tossing Swann through some plyboard in the opposing corner.

Plenty more trash can lid shots to Anderson’s head, followed by a running splash, net Swann a two-count. Gallows, heeding Anderson’s call, slides a table into the ring. Anderson gets up to the top rope and dives off with Swann in a neckbreaker onto the table. It doesn’t break which, as always, makes it worse, and it’s enough for a win.

Mickie James has words for Deonna Purrazzo, promising that she won’t make a name for herself at James’ expense, and vows the return of Hardcore Country.

Matthew Rehwoldt is angrily painting backstage, picking a beef with Rey Miguel, because he thinks they will make great art in the ring together.

Next up is Josh Alexander, feeling prepared for his upcoming match with Chris Sabin. Christian Cage interrupts the interview, looking for Alexander to join his team for next week’s show — and Alexander is honoured to join up.

More chatting, as Rohit Raju admits he’s received lots of criticism for how he kneed Chelsea Green in the face last week, but he’s not sorry.

Bey begins by hiding in the ropes, and then on the floor, but Finlay chases him down and gives him uppercuts and chops as his opening offence. The next few moments feature too many dodges and reversals to keep up with before Finlay finally drops Bey with a back elbow and senton.

A double-chop by Bey reverses the momentum, and a thumb to Finlay’s eye helps, too. A leaping elbow in the corner by Bey leads him to a diving clothesline off the top rope. He can’t, however, land a springboard stunner, as Finlay reverses it into a belly-to-back suplex. He follows with a strong STF, but Bey just manages to get his foot to the bottom rope.

As Finlay tries to follow up, Bey ducks a clothesline and hits a spinebuster instead. Bey tries to sneak another victory with an illegal pin, but Juice Robinson jogs to the ringside area to break it up. As Bey is distracted, Finlay rolls him up for the win.

Unfortunately for Finlay and Robinson, they’re attacked from behind by Hikuleo and they take a beating, especially as Bey joins in the fight.

Next is a comedy bit featuring an underground gambling operation taking bets on the next match. TJP bets on Maclin, No Way gets kicks out, and he promises to take it out on Hernandez in the future – that’s the gist of it.

No time wasted as Maclin muscles Williams to the mat, followed by suplexes, kicks, and a knee to the gut that seems to take Williams out of the match before it really gets going. However, Williams wriggles out of another suplex and brings the bigger Maclin down with a Russian Leg Sweep and baseball slide dropkick.

As Williams looks to continue his assault, the match is interrupted by a conga line lead by No Way. With Williams distracted, Maclin hoists him up and finishes the match with his sit-out fisherman’s driver.

Backstage, Eddie Edwards looks ahead to his match with Moose later tonight, but he’s interrupted by Sami Callihan offering his help. Cage interrupts them both and asks for their help, too. Callihan says yes, but Edwards says he can’t be on the same team as Sami, so Cage has to pick from between them.

After a break, Austin provides an update on his team, and he manages to recruit both W. Morrisey and Moose.

Moose opens with a kick to Edward’s head, sending him spinning to the mat. A reverse atomic drop slows Moose down, but a shoulderblock gives Moose the hammer once again. The back and forth continues as Edwards chops the heck out of Moose’s chest, but not long afterwards Moose nonchalantly tosses Edwards to the floor.

During the break, Edwards was attacked by Morrisey via a big boot, but back in live time Edwards flings Moose off the top rope with a hurricanrana. The two stand off in the middle of the ring trading blows for a long spell, before a clothesline by Edwards turns Moose inside out. Moose counters with a powerbomb and readies a spear, but Edwards slips to the side, allows him to hit the corner hard, and follows with his Boston Knee Party — but Morrisey puts Moose’s foot on the bottom rope to break up the pin.

Edwards goes after Morrisey outside, but when he returns to the ring he absorbs a short-run, low-impact spear by Moose to close out the match.

A double-team attack on Edwards looms, and Chris Sabin comes to the rescue … but here comes Myers and The Professionals, then Alexander, then Austin, Fulton, Cage, Alisha, and finally Callihan, who works with Edwards to clear the ring, setting up the big match for next week.

An enjoyable show, with an unfortunately soft ending to a hard-hitting main event match. No stand-out matches as none were given the time needed to achieve that, but the show did its job of setting up the interest in Victory Road on September 18th.