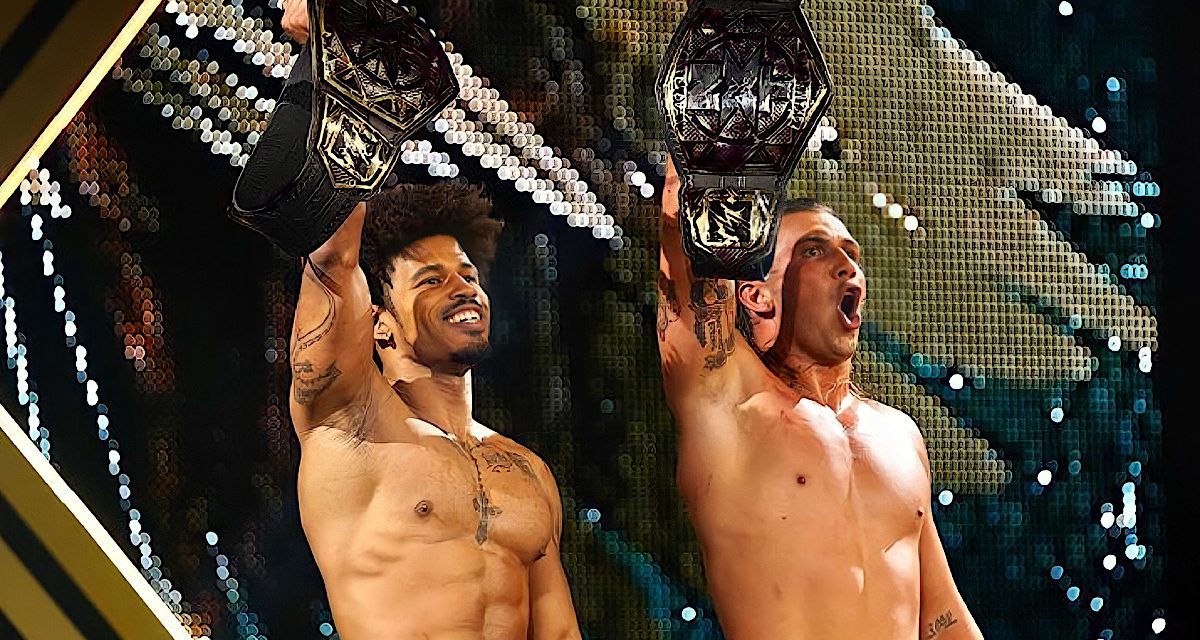 Headlined by MSK retaining their tag team championships, tonight’s September 7, 2021 edition of NXT marked the end of the black-and-gold era. Next week, the revamp is coming into fruition with a change in aesthetic and M.O. — and likely much more where that came from.

NXT UK’s Ray is making her NXT US in-ring debut, notably after having a record-long reign thanks to the pandemic. Early on, she offers nothing flashy, and Moon contrastingly delivers some cool reversals and a top-rope Codebreaker. The Scotswoman works down Moon throughout picture-in-picture and eventually hits a tornado DDT for two. They continue hitting big maneuvers, persisting the opener even further, but Ray finally connects with the Gory Bomb for three. NXT openers are a mixed bag in quality, and personally, this just overstayed its welcome.

The goons Oney Lorcan and Danny Burch are backstage, vowing to “end” MSK tonight. They compete in an NXT Tag Team Championship match later on.

“Over the weekend”, Indi Hartwell hosted a bachelorette dinner preceding her marriage to Dexter Lumis next week. She toasts to Candice LeRae, who ultimately reveals her acceptance of the marriage… but Johnny Gargano will be a tougher nut to crack; comedy about busting nuts ensues.

Along with Joaquin Wilde and Raul Mendoza, Elektra Lopez has officially “joined the familia” — at least for LDF’s ongoing rivalry with Hit Row. Escobar takes majority control, but as always, Hayes shines with every offensive opportunity. Escobar remains on top following commercial with his underrated intensity, but Hayes eventually makes the comeback. Both competitors are super crisp, and Hayes especially has picture-perfect execution. Inevitably, Wilde and Mendoza distract the referee as Lopez body-slams Hayes, allowing Escobar to deliver the Phantom Driver for three.

Malcolm Bivens introduces Brutus and Julius Creed, the accomplished shoot wrestlers of Diamond Mine. This Tuesday, they make their NXT in-ring debuts with Roderick Strong backing them.

Opponents Viola and Averill face two massive collegiate wrestlers, and of course, they stand no chance. The Creed brothers manhandle the opposition with suplexes and throws before Julius gets the pinfall. The vehemence of these two is almost frightening.

Hit Row is in the studio, sending a message to Legado del Fantasma. B-FAB in particular responds to Elektra Lopez, but each member cuts a hard promo.

The champions Stark and Shirai won the straps seemingly a lifetime ago, and this is bafflingly only their first defense. They’re starting with a low bar facing Catanzaro and Carter, who have possibly the worst gimmick in NXT: TikTok dancers. Before commercial, Shirai proves she’s still the best with amazing agility and smoothness, but tables turn when Carter makes the comeback. Dissension seeps through between Shirai and Stark, but they recuperate enough for the former to deliver the finishing moonsault. Because they literally haven’t wrestled in months, Shirai and Stark are surprisingly a great team.

Kyle O’Reilly offers a reflective promo about his previous rivalry and the NXT Championship. Speaking wise, he’s really starting to get comfortable.

Franky Monet and Jessi Kamea hear from Robert Stone that the former is receiving an NXT Women’s Championship match next week.

Unfortunately for Ferry, she’s outmatched by an opponent with mythological superpowers. And for Ying, her mysterious aura completely diminished under the bright lights of the squared circle. Keep her on the throne where she doesn’t look ridiculous.

LA Knight cuts a promo while driving though city lights, and the aesthetic is really cool. He’s an obvious main-eventer whenever the time comes. Afterwards, Tommaso Ciampa speaks about next week’s contenders match as well.

It’s Burch’s return matchup following an injury, hence the thoughtful “welcome back” chants. “They never missed a beat,” did Burch and Lorcan, but MSK takes control before picture-in-picture. The challengers beat down on MSK with strikes and holds until Nash Carter makes the hot tag to Wes Lee, who is outstandingly graceful. The champions escape double submissions before things break loose, and MSK gets the decisive pinfall victory with the assisted hangover.

The defeated Burch and Lorcan are met by Dunne and Holland, who ultimately betray and destroy them. Looks like Holland held his grudge after all!

Yeah. Yeah it was an alright show. Standard matches and squashes, and lots of good promo segments. But the focal point has to be NXT as a whole. That being the uncertainty of future NXT and the legacy the black-and-gold era left behind.