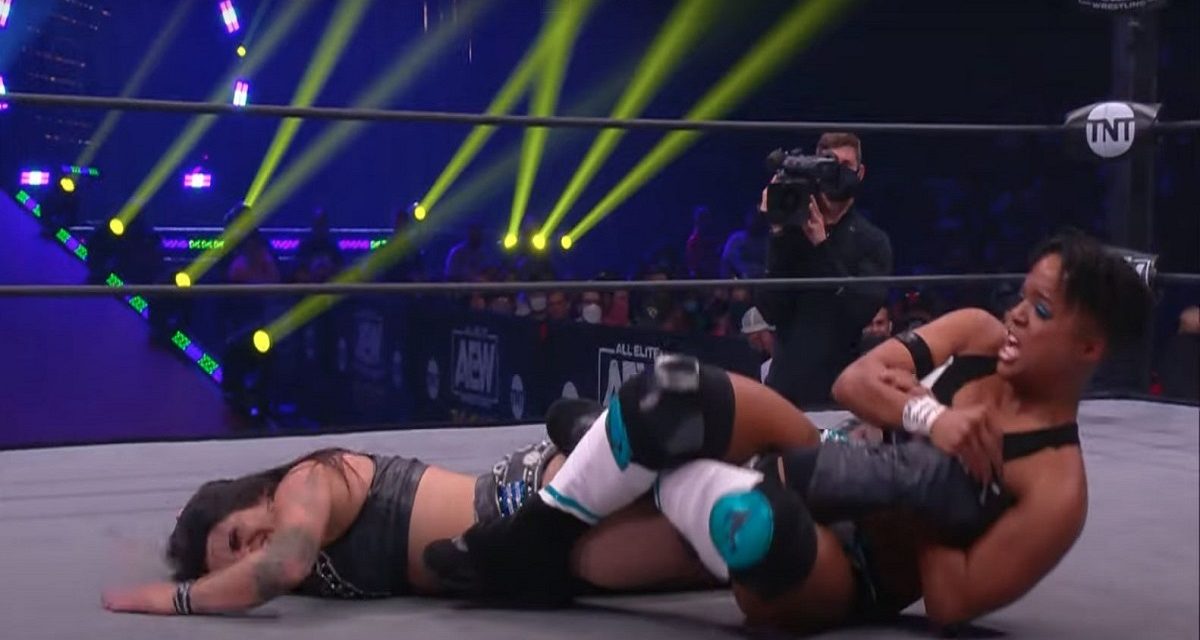 Howdy wrestling fans and welcome to another AEW Dark Elevation and Dark recap for the week of September 6th.

Both shows were entertaining, had good pace and good wrestling. The shows also pushed more storyline than some of the more recent Dark and Dark Elevations. Of note was the ongoing dissension with the Dark Order and the Big Swole vs. Diamante storyline.

Speaking of Big Swole and Diamante, easily the match of either show was their Three Strikes match on Dark. It had good action and had an intensity that made it a believable fight. It was also a good way to end that feud. Additionally, Anthony Bowens vs Griff Garrison was an entertaining match and the one I’d recommend from Elevation. Max Caster made his return on AEW Dark and his pre-match rap was hilarious.

Before the opening credits, we start with a Wingmen promo hyping their matches with Bear Country and Dante Martin later on the show.

Paul Wight, Tony Schiavone and Eddie Kingston are on commentary.

1. Bear Bronson and Bear Boulder got the win over Peter Avalon and Ryan Nemeth when Bear County hit the Elevator Splash on Ryan Nemeth for the pin. After the match, Cezar Bononi and JD Drake went after Bear Country.

2. Emi Sakura (w/ Lulu Pencil) used a backbreaker to beat Missa Kate in a quick match. I think Kate got one or maybe two offensive moves but Sakura pretty much dominated.

3. Lance Archer used a Blackout to pin GPA. GPA was carried to the ring by Archer before the match and didn’t get a ring intro. This was a quick squash and Archer was over with the crowd.

4. Kiera Hogan got her first AEW win over Blair Onyx after hitting the Face The Music (swinging Fisherman neckbreaker) to get the pin.

6. Nyla Rose got the pin on Laynie Luck after hitting the Beast Bomb.

7. Anthony Bowens beat Griff Garrison (w/ Julia Hart) in a pretty entertaining match. Bowens went for the boom box distracting the ref allowing Max Caster to come down and hit Griff with a chain giving Bowens the pin and the win. After the match, Brian Pillman Jr. came to the ring with a pool cue and cleared the ring of the Acclaimed.

8. Red Velvet used a modified Final Slice to get the pin on Queen Aminata.

9. Dark Order promo. Reynolds is not with the group and Alan ‘5’ Angels calling out Evil Uno and challenging Uno to a match.

11. Dante Martin beat JD Drake (w/ the Wingmen) using a springboard moonsault in a competitive match. At one point in the match, the Wingmen got involved, beating up Dante outside the ring giving JD a momentary advantage.

12. Riho pinned Skye Blue after hitting a double knee strike. This was an entertaining match with both women getting some good offence. After the match, Skye and Riho showed respect giving each other a hug.

13. In the main event, Jon Moxley, Eddie Kingston and Darby Allin (w/ Sting) beat Chaos Project and RSP when Darby hit a coffin drop on RSP to get the pin. This was an entertaining match with Chaos Project doing their thing and RSP getting a few offensive moves on Moxley.

1. Lance Archer pinned Jason Hotch after hitting the Blackout. Archer chased Hotch to the ring and Hotch got one tope suicida on Archer before getting beat up in a quick squash.

2. The Bunny (w/ Penelope Ford) got the win over Laynie Luck after hitting the Down The Rabbit Hole elbow drop for the pin.

3. Evil Uno (w/ Stu Grayson and Colt Cabana) got the win over Alan ‘5’ Angels (w/ 10 and Johnny Silver) after hitting Something Evil. The crowd was chanting ‘Please don’t fight’ during the match and I get the feeling the fans may not be into this feud or don’t want to see it.

4. Max Caster and Anthony Bowens beat Shawn Dean and Robert Anthony after hitting the Mic Drop elbow on Anthony for the pin. The pre-match rap segment was hilarious…Definite 8/10.

5. Joey Janela pinned Lee Moriarty after hitting a Death Valley Driver in a pretty good back and forth match. Janela came out with Kayla Rossi (although they did not name her yet). During the match, Rossi got involved throwing Moriarty into the barricade outside the ring. After the match, Sonny Kiss hit the ring and went after Janela.

6. Stu Grayson and Colt Cabana (w/ Evil Uno) beat RSP and Travis Titan when Cabana hit the Chicago Skyline on Titan to get the pin. The announcers continued pushing the rift between members of the Dark Order

7. In the main event, Swole beat Diamante in the Three Strikes match. Diamante got the first fall with a pin using a handful of trunks, Swole got the second fall with a heel hook causing Diamante to tap and Swole got the Dirty Dancing with a chain wrapped around her arm to get the knockout and third fall for the victory. This was a great match.

Thanks for checking in and c-ya next week!!