AEW Dynamite: The Man in Black (Hair) has the Last Laugh before All Out 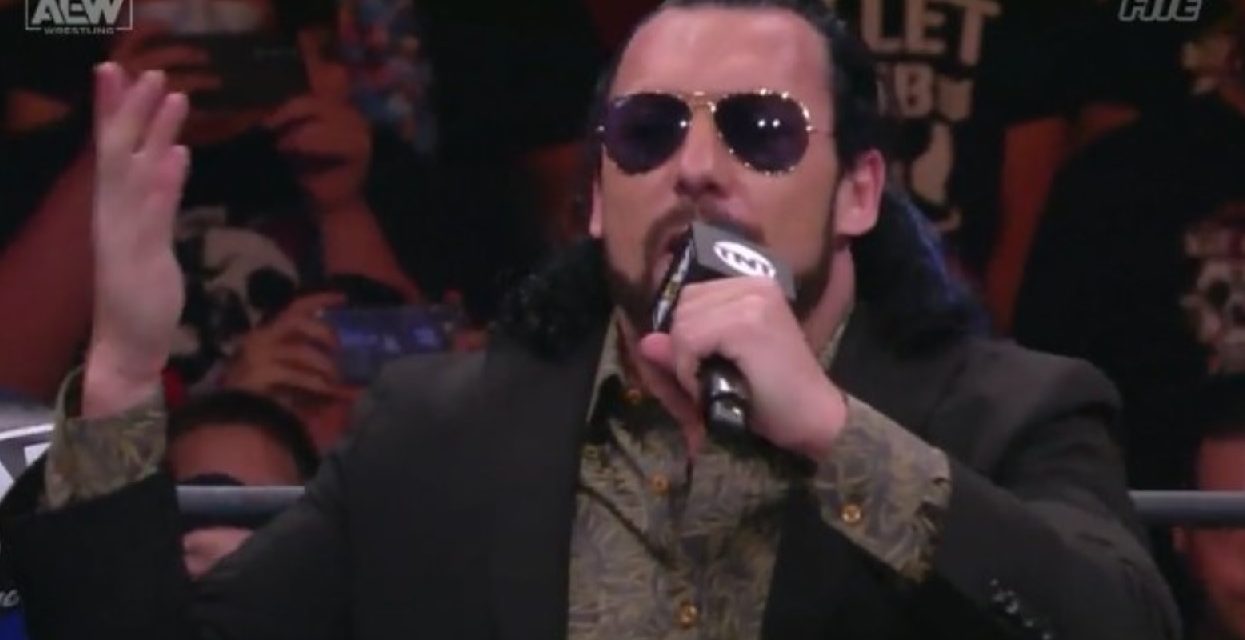 It’s always kind of bittersweet to arrive at the last of any weekly wrestling shows before a big pay-per-view. Nothing truly big is going to be given away (or at least it shouldn’t be), so the best you can hope for is some good in-ring action and some more hype for the paid card. In AEW, at least, this only happens every few months, so it’s manageable. We’re off to Chicago, or near Chicago, anyway, for Dynamite on TNT.

Santana and Ortiz are sporting face paint, which we haven’t seen them wear since Blood and Guts. Meanwhile, Cash Wheeler is making his return to action following his wince-inducing arm injury. We know FTR doesn’t like flips, but Santana and Ortiz have no such qualms and are flying from the ring to the floor with reckless abandon early on. Wheeler and Dax Harwood attempt to respond by using the exposed turnbuckle as a weapon, but it doesn’t work out for them and Santana nearly wins it with a frog splash. More near falls follow, and if this is Wheeler’s final match, at least he’s going out with a good one. He takes the loss though, which keeps me hopeful that he’s going to be able to return to action full time.

Winners: Santana and Ortiz by pinfall

Daniel Garcia and 2.0 say they ae looking forward to the CM Punk-Darby Allin match at All Out, but they really aren’t, because Garcia says he will take the match away from Darby after twisting him up at Rampage. Cool story bro.

It ties into the next segment as well, which features Chicago’s favorite son, Punk. He asks rhetorically if anyone is sick of him yet and admits that Sunday could be it for him. Punk even says he’s a little scared since he hasn’t wrestled in seven years. Garcia and 2.0 crash the party, beating down Punk, and naturally, Allin and Sting come to the rescue. The good guys team up and clear the ring, and after a short staredown between Punk and Allin, Sting grabs the mic. He says he’s always wanted to share the ring with Punk but their paths have never crossed. Better late than never, as Sting says their goals are the same: to ensure nothing messes with the match everyone wants to see at All Out. That includes Sting, who vows to stay out of it. Let’s go.

A video package features a number of AEW personalities hype up the Kenny Omega-Christian Cage title bout at All Out. Not to be forgotten in the wake of Punk-Allin, I suppose.

Earlier today, Tony Schiavone reluctantly gives MJF some time to talk about Chris Jericho, who he gives his due credit but also compares to Muhammad Ali late in his career when he hung around his sport too long. MJF thinks Jericho is an addict for the spotlight, unwilling to let go of the adulation. He’s looking forward to ending one of the greatest runs in professional wrestling history.

Hardy earns himself an immediate ejection with a pre-bell ambush of Cassidy, but that likely suits his purposes just fine. Orange wins this pretty easily, and when the rest of the Hardy Family Office tries to attack him, Jurassic Express arrives to even the odds.

A video package reminds us that Satoshi Kajima is coming to All Out to take on Jon Moxley. Props to him for stepping up.

Surprisingly, Jim Ross is making his first in-ring interview appearance since he joined AEW, but it’s worth it since it’s to talk to Jericho. The Demo God notes it was almost exactly 22 years ago when he started his main event journey in wrestling in Chicago, and was recruited to do so by J.R. For his part, Ross has questions about why he put the stipulation on the match himself, making it so if he loses, he must retire. Turns out Jericho wants more, which is why he had to take the chance. If something goes wrong on Sunday night, he will walk to the commentary desk and do his best full time, thanking everyone for supporting him over all these years. But for that to happen, Jericho says MJF will have to be the best he’s ever been. See you Sunday, you little prick. That’s Jericho saying that, not me.

Allin admits that Punk was his favorite wrestler when he was 15, but he’s irritated that Punk picked him as his first AEW opponent knowing what Darby is willing to put himself through in the ring. Though he calls it doing the impossible, Allin says he knows he needs to beat Punk in Chicago.

Cage gets right to it and starts a brawl before the bell even rings. That’s fine to start, but he’s up against way more than just Hobbs here, and Team Taz ensures Hobbs gets a victory. Sorry, Cage.

It wasn’t the arrival of Lee Johnson that made Malakai Black leave the ring last week. He left on his own, see. Black quotes some mythology in saying he’ll put coins on each eyelid when he beats Johnson so he can pay the boatman to Hades. That’s a smart reference!

Can the entire Factory stop Paul Wight before he gets his hands on QT Marshall on Sunday? Uh. no. The Gunn Club runs down to give the big, uh, showman some aid, though he doesn’t appear he needs it. But wait: Billy Gunn floors Wight with a pair of chair shots, bending the chair in the process. Heel turn by the Gunn Club? Say it ain’t so! The Factory returns to pick Wight’s corpse, and as per usual, Wight is a face with not enough friends as no one comes to help.

Schiavone gets some news from Dr. Britt Baker: She has re-signed with AEW. Not that anyone thought she wouldn’t. She’s sending Jamie Hayter and Rebel into the Casino Battle Royale as well to ensure

Even though these ladies are a step below the top of the women’s division at the moment, they get a chance to work a pretty long match here. The Bunny inevitably ties to lend a hand from the apron, but Conti shoves Ford into her and does something that never works, a bridging pin to get the three count. Ford and Bunny join forces after the bell, only to see Anna Jay make her return after months away to bail out Conti.

Jay is going to be entered in the Casino Battle Royale, but so is Thunder Rosa. She doesn’t get much time to talk about it as she gets approached by two of the strongest members of the women’s division, Nyla Rose and Jade Cargill. Rosa figures if she’s going down, she will go down swinging, but that goes poorly for her. Rose and Cargill tease a fight of their own, but their respective managers say there’s more money in it by waiting until Sunday.

Jurassic Express and Lucha Bros. vs. The Elite (Young Bucks and Good Brothers)

This is a really fun multi-team matchup for a main event, but let’s be honest: I’m here mostly for the Rey Fenix hot tag, and thankfully they give it to us. Worth noting is the steel cage reminding us that the Bucks and Jurassic Express will meet in that same structure at All Out. Less notable is Don Callis joining the announce team as he does that any time his guys are wrestling these days. You know his squad is going to come out on top here too, and they sure do, with Fenix taking the BTE Trigger and getting pinned.

Winners: The Elite by pinfall

Omega isn’t about to let the last show before All Out end without getting the final word. He tells the Good Brothers to “take care of the dinosaur,” and they drive Luchasaurus through a table with the Magic Killer. Omega goes to beat up Jungle Boy, and while Christian Cage hustles to the ring, this feels like another outnumbered faces beatdown. The AEW champ gets Callis to lower the steel cage, because why else would it be up there? This isn’t going to end well for our heroes. Brave souls like Marko Stunt, Dante Martin and Frankie Kazarian try to scale the cage to rescue Christian and the Lucha Bros., but most of them get cold spray in the face from Brandon Cutler. Cage takes a nasty BTE Trigger from the Bucks and Omega, and the heels are triumphant at the end of this particular night. Make sure not to miss All Out on Sunday, and we’ll see you in seven!

We shouldn’t grade on a curve, so let’s call this another acceptable two hours of wrestling. Really enjoyed the opener and the main was fine too, but the rest was standard PPV promotion stuff. Oh, and yes, seeing Sting and CM Punk in the ring together, however briefly, was pretty cool. All Out is certainly loaded, so there’s lots to look forward to this weekend. Get ready, Chicago area.