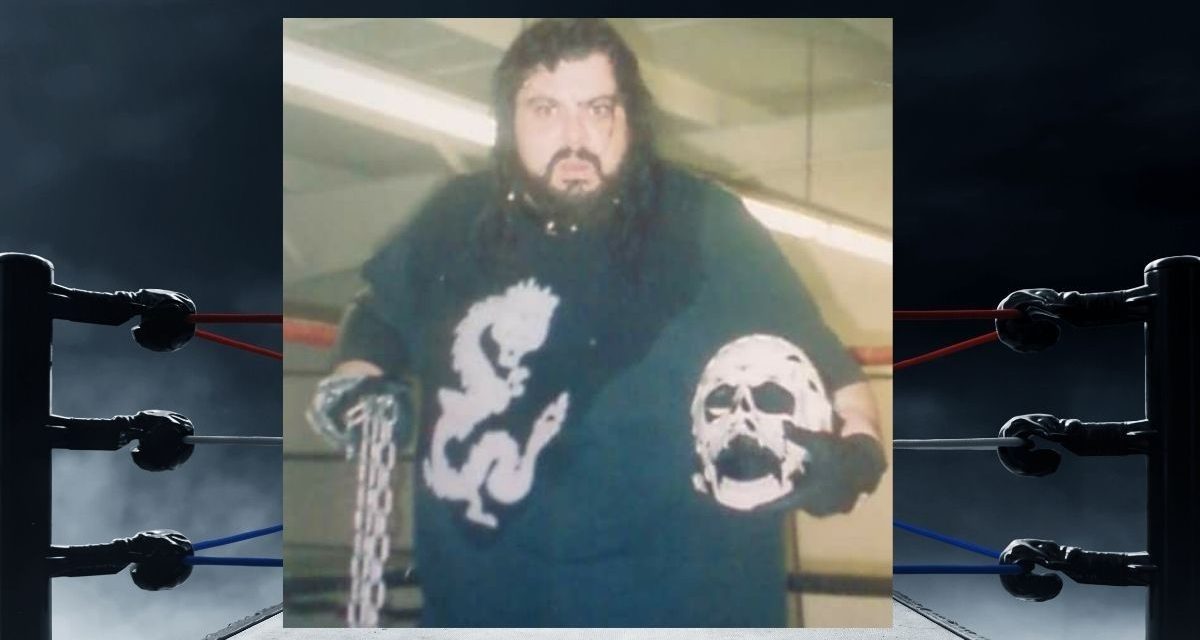 A Midwest-based wrestler, Izzy Blackwell, who also wrestled as Izzy Tempest, has died. He was 53.

He was legitimately the nephew of “Crusher” Jerry Blackwell, as Izzy’s mother was Jerry’s sister.

“When you’re a maternal nephew of one of the best big men the business has ever seen, it’s kinda is ingrained in you,” he told the Wrestle Talk Podcast. “When I did eventually get into the business, I came into it anonymously, I did not want to use the Blackwell name to get me anywhere.” Hence, Izzy Tempest.

Born Thomas T. Richmond, on August 27, 1968, in Granite City, Illinois, “Izzy” was a musician first, performing in a heavy metal band founded in 1994 called P.O.W.E.R.T.R.I.P. (not the more well known band of the same name, Power Trip). Richmond, who played keyboards, and Harsh, the lead singer, started wrestling on the side. “We were blessed enough to find a promoter who saw something in us and gave us a chance to do our thing, man. And you know, life’s never been the same since,” he told Wrestle Talk.

“We were heavy metal musicians ourselves, but had always had the love of wrestling, and knew that it was something that one day we were going to explore,” he said on the Falls Count Everywhere podcast, “We just didn’t know how far it would take us and help our travels would lead and the number of not only great independent wrestlers we get to work with, but the number of famous people we would get to work with.”

In an interview with MetalBabeMayhem, Izzy talked about the band: “The name P.O.W.E.R.T.R.I.P. is actually an acronym. Harsh and I created it while we were heavily under the influence! It stands for People Opening the Worlds Eyes to Reality Through Rage Interaction and Perseverance. That pretty much says it all. The songs are realistic in content, and we’re either gonna get it through to you by playin’ to ya or talkin’ to ya.” 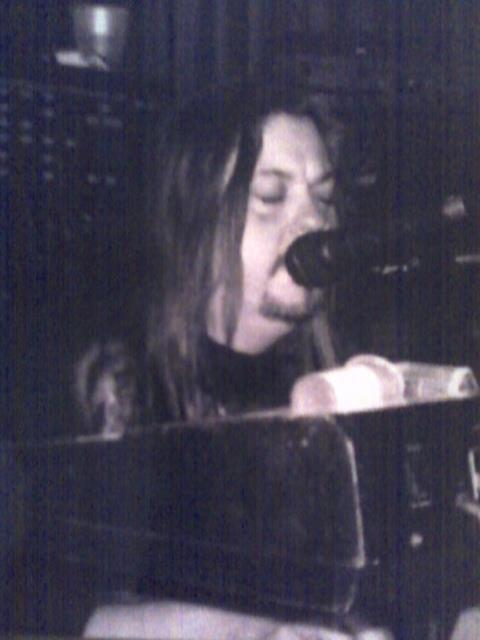 Izzy at the keyboards with his band. Facebook photo

Blackwell started watching wrestling around 1974, and he’d skip out of church early to go catch Wrestling at the Chase, the St. Louis-based promotion. The Texas-based WCCW was another promotion he remembers getting to watch.

“When I was growing up, it felt like everybody in grade school was a wrestling fan, and everybody knew Wrestling at the Chase. It was nice to go to school and tell those kids, ‘Hey, that’s my uncle,'” he said.

It was the family business, but not everyone was in the loop. “My mother was Jerry’s sister, and he did not smarten anyone up to the business, to let anyone know anything — except for grandpa, and that was because of a threat of killing the first wrestler he saw beating up his son.”

Izzy’s mother didn’t want her son to follow his uncle into the business, so he didn’t start wrestling until he was  29 years old. But he had a solid background as an amateur wrestler, finishing third in the 1986 AAU/USA Junior Olympic Games, which were in St. Louis that year. He competed in the Heavyweight division, with Joseph Cornelius of Florida finishing first, and Ben Oliver, of St. Louis, finishing second — and Oliver would become wrestler and promoter Big Bad Ben.

Rampage Championship Wrestling (RCW) was his main promotion for a long time — and he was inducted into the RCW Hall of Fame in 2018. He later was a trainer for the Ring of Courage Wrestling Academy. Granite City, Illinois, just north of St. Louis, was home.

He wrestled until around 2006. “My back was shattered,” he said. “I was eating prescription pain medication just to go out and put on a show.” 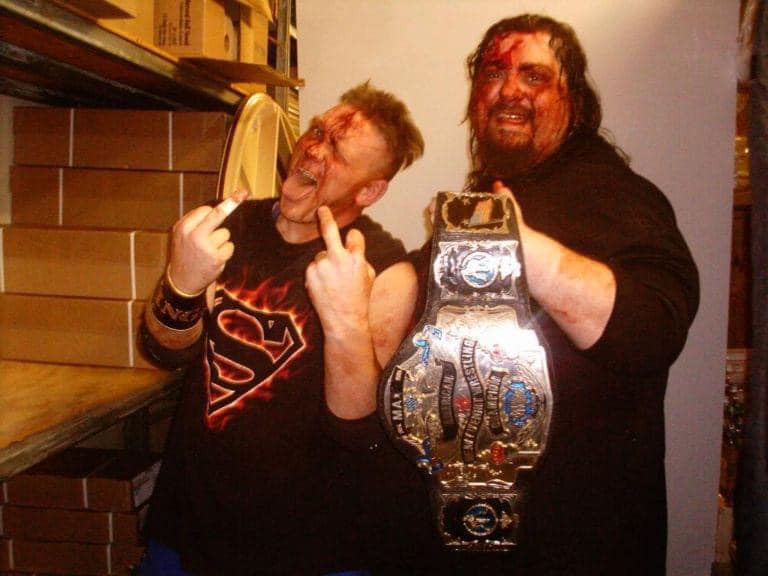 At 6-foot-3, 400 pounds, Izzy Blackwell dwarfed many of his opponents, and described how he liked a tougher style to Falls Count Everywhere:

Yeah, it is sports entertainment. But there are those of us that like to take things to a little bit rougher level. And I’m not necessarily talking about all the King of the Death match type things. But guys who aren’t afraid to get physical in the ring, and let the fans know when somebody is being hit a little harder than you would expect or kicked a little harder than you would expect.

Curtis Wylde knew Blackwell from both music and wrestling, and posted about his death on Facebook: “To know Izzy was to love Izzy! Izzy was a big part of my/our life for many years. When I first moved back to the STL area the St. Louis Wrestling scene was basically a closed territory. Outsiders weren’t looked at kindly. One of the first organizations that I found a home in was MAX (Mid-American Xtreme), and the two guys I hit it off with the most was Harsh & Izzy. They were locker room leaders, and took me under their wing in more ways than they may have realized at the time. They became my friends, my brothers, and I’ll always be grateful. From watching Izzy propose to Jen, to watching Jen’s pregnancy with Geoff Richmond, to Izzy’s retirement match against Madman Pondo. Izzy was at our wedding & Harsh was one of my groomsmen. I managed their band P.O.W.E.R.T.R.I.P. for 4 years. Harsh was the lead singer, Izzy dominated the keyboard. Some of the most meaningful years of my life.”

Blackwell’s son, Geoffrey, began wrestling at age 14, when he was 5-foot-10, 200 pounds. “He’s got size, he has grappling ability. I’m proud of him. He scares me to death, but I am proud of him,” Blackwell said shortly before his son’s debut. “And I just I want him to say in the coming years for fans out there to keep an eye out for the beloved Damien Blackwell because he will be coming throughout the Midwest and we intend to get him down south as well.”

Tyler Blake is another area wrestler who posted about Blackwell: “Rest In Peace to the only man I consider a legend around here! Izzy Tom Blackwell even though we had heat, you were still there to share knowledge with me and all the other young talent. Not only were you a father to Damien Blackwell but you became a father to the entire next generation of this business. You are an inspiration and I know you’ll be guiding all of us to success from the afterlife. Thank you for everything you’ve done and thank you for being our mentor. No matter how many generations pass, you will always be a household name and you will never be forgotten. Fly high, and be ready for our fight when I meet you up there!”

“The Voodoo King” Sonny Lucas wrote something similar: “Thank you Izzy Tom Blackwell for all the advice you have giving me as I was coming up in the wrestling business, you always was there to give me different things to work on to make my character better. It was a vibe about this man he pulls you in, he connects with you in and out the ring and locker room. I was so grateful to shake this man’s hand and pick his brain about professional wrestling.” 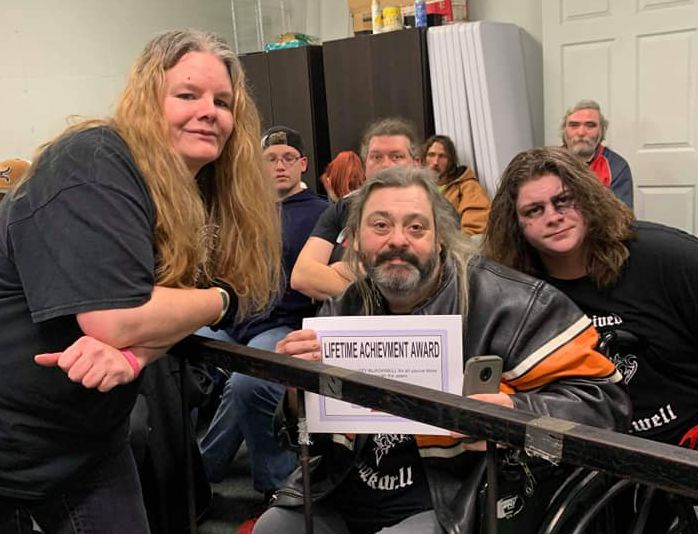 Jennifer and Izzy Richmond, with their son Geoff. Facebook photo

Blackwell married his wife, Jennifer, in June 2003. Their children are Geoffrey and Marissa.

He had had numerous health challenges in recent years, including diabetes and losing part of his right leg in 2012 due to the MRSA Super bug. He still attended wrestling shows in a wheelchair. Just after his birthday, Blackwell posted to Facebook:

Thank you all so much for the Birthday Wishes! Got more news after a week since testing positive for Covid-19 I got a negative test today, but, I’m going to still stay quarantined the final 7 days and then test again to be safe, this stuff is no joke! God bless, be safe and thanks for making my Birthday

Details are still coming in on his passing on August 30, 2021, and on any funeral.