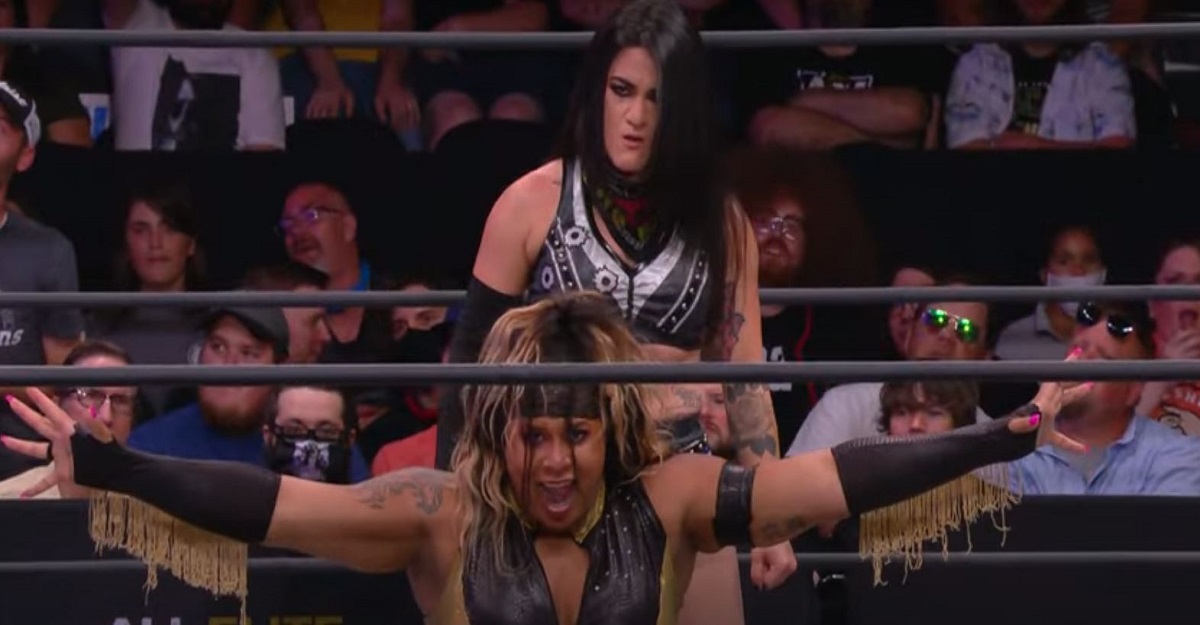 Welcome to another recap of AEW Dark Elevation and Dark. The shows were taped in Milwaukee and Chicago respectively and both shows had a good live crowd.

There were some good matches this week but I thought the best match was Nyla Rose and Diamante vs Big Swole and Julia Hart on Elevation (and I can’t believe I just said Julia Hart was in a match of the night). It may not have been the best in-ring but it had good enough in-ring with a good story between Diamante and Swole which has been one of the more underrated stories in AEW. At times it just looked like a fight and I’ll admit I love matches like that. The Elevation main event of Sammy Guevara and Fuego Del Sol vs Chaos Project was also very entertaining.

Finally, I might argue that I liked this show better than last week’s Rampage. It had a better flow and pacing which made the show that much easier to watch and digest. With all that said, Dark was also very good this week.

AEW Dark Elevation comes to us from Milwaukee. Tony Schiavone, Paul Wight and Eddie Kingston are on commentary.

1. Daniel Garcia submitted Tylor Sullivan with the sharpshooter in a very quick match . What Garcia lacks in size, he makes up with intensity and technical skill. He also got a good heel reaction from the crowd.

2. Jora Johl (w/ Matt Hardy) got the win over Kal Herro after hitting a pump kick to get the pin. During the match, Herro brought Johl over to the ropes and Hardy slapped his own guy in the face to fire him up. Herro had a mullet, fanny pack and arm tassels making him every 80s wrestling trope we love.

3. Emi Sakura (w/ Lulu Pencil) beat Ashley D’Amboise after hitting a double underhook backbreaker. While I have never been the biggest fan of Sakura’s gimmick, once you get around that, she is very good in the ring.

4. Nyla Rose and Diamante (w/ Vickie Guerrero) defeated Julia Hart and Big Swole when Rose hit the Beast Bomb on Hart for the pin. Diamante and Rose showed some good tag team wrestling and pretty much dominated this match. Rose and Diamante could be a very good team and stable.

5. Matt Hardy and Jora Johl backstage segment with Hardy congratulating Johl and pushing the fact that AEW is on TV in India. Johl spoke in his native language. It was a well done segment.

6. Dante Martin pinned Adam Grace after hitting a Death Valley Driver. During the match Dante did his double jump on the top rope into a moonsault and almost botched it but recovered his balance which was really impressive. Dante has been getting a bit of a push lately and it will be interesting to see if they keep him as a singles when his brother comes back from injury.

7. Thunder Rosa beat Laynie Luck with a Fire Thunder Driver. Not surprisingly, Thunder Rosa is very good in the ring and I hope this is the beginning of a very slow build towards the eventual Rosa vs Britt Baker match somewhere down the road.

8. Jade Cargill and Mark Sterling promo about Jade being in and winning the Casino Battle Royal. And of course, she is that b*tch.

9. Brian Cage hit a drill claw on Anthony Bowens to get the win in a pretty good match. Bowens has all the tools and has some serious potential. Powerhouse Hobbs (w/ Hook) replaced Eddie Kingston on commentary and did a pretty good job. After the match, Hook distracted Cage and Hobbs attacked Cage and gave him the Town Business.

10. Hikaru Shida used the Falcon Arrow to get the win over Heather Reckless in a quick match. I thought Shida was awesome but I’ll also admit to being incredibly biased because I love me some Shida.

11. In the main event, Sammy Guevara and Fuego Del Sol got the win over Luther and Serpentico when Sammy G hit the GTH on Luther. This was an entertaining match with some good back and forth. Serpentico got beat up by everybody…including his tag team partner.

Taz and Excalibur are on commentary in the United Centre for this week’s AEW Dark.

1. Kris Statlander used a Fisherman Buster slam to beat Selene Grey. Statlander showed some impressive strength holding Grey in a suplex position and throwing her around the ring. Our favorite alien is looking good leading to her upcoming title match with Dr. Britt Baker (DMD) at All Out.

2. Joey Janela got the win over Robert Anthony after hitting a Death Valley Driver. After the match fitness pro Kayla Rossi (although they didn’t announce her name) teamed up with Janela and hit a powerbomb on Anthony. Antony got some decent offence and got a nice hometown reaction being from Joliet.

3. Emi Sakura beat Laynie Luck after hitting a senton bomb off the ropes. Sakura has looked very good in her recent matches and it’s great to see her back in regular action.

4. Ethan Page and Scorpio Sky beat Mat Fitchett and GPA when Page hit a monster looking Ego’s Edge on Mat Fitchett. Fitchett got some limited but decent offence and took the Ego’s Edge like a champ. Page is someone who I would love to see him as a singles wrestler.

5. Frankie Kazarian submitted Serpentico with the Crossface Chicken Wing in a pretty good back and forth match. Not that I should be surprised but Kaz showed why he is such a versatile worker doing some good mat work, some flying stuff and some power stuff.

6. Leyla Hirsch tapped out Blair Onyx with a cross armbreaker. During the match, Onyx did the Bray Wyatt upside down crawl thing and even hit some strikes on Hirsch to get a brief advantage but ultimately, Hirsch got the submission in a very quick match.

7. Matt Lee and Jeff Parker beat Travis Titan and Jason Hotch after hitting the Two For Show on Titan to get the pin. 2point0 have been impressive since their debut in AEW and I really hope to see these guys in a main program sooner rather than later.

8. The Bunny (w/ Blade) pinned Sierra after hitting the Down The Rabbit Hole elbow drop to get the win. Bunny’s character has gotten so much better and more defined which helps her overall in-ring presentation.

10. QT Marshall (w/ Nick Comoroto and Aron Solo) hit a Diamond Cutter to get the win over Evil Uno. I might argue that Uno got a lot of the offence in this match and even though I’m not the biggest fan of QT the character I give him a lot of credit. He gives a lot to his opponents and tries to make them look good. This match was no exception.

11. In the main event, PAC (w/ Penta El Zero Miedo and Rey Fenix) submitted Matt Sydal with the Brutalizer to get the win. Andrade El Idolo, Chavo Guerrero and the unknown third member joined the commentary team and distracted Pac at points in the match.