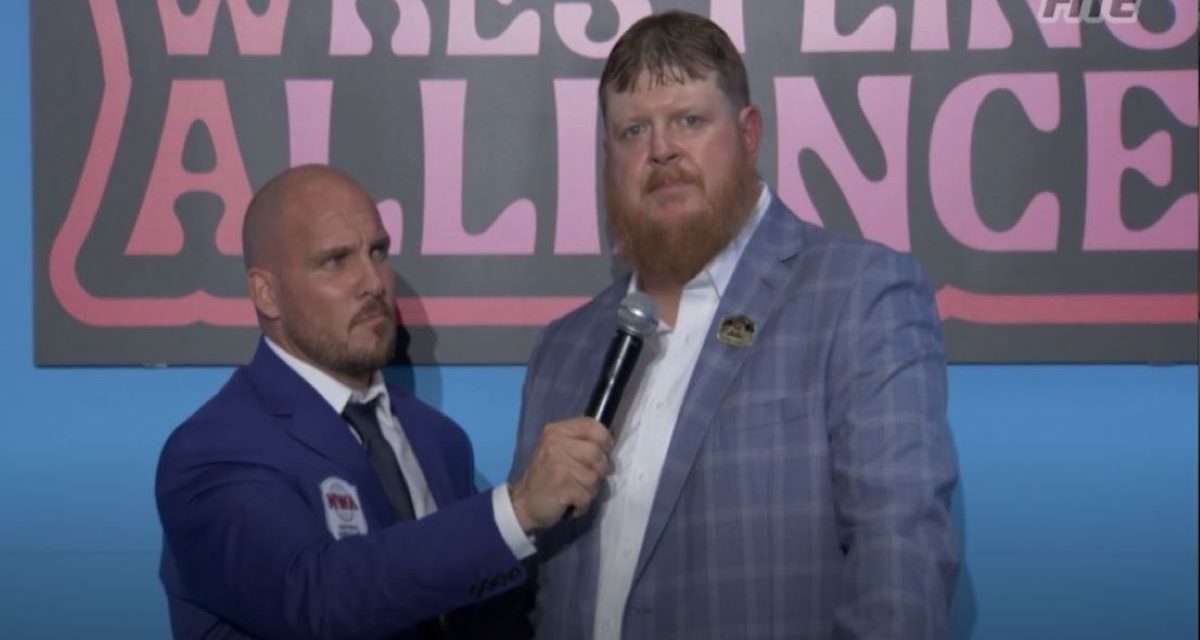 So much to unpack after the Nationa1 Wrestling Alliance had a big weekend with their double pay-per-view, and so much needs to be addressed, so let’s step Into The Fire.  We at coming to you for the Khorassan Ballroom at the Chase Plaza Park hotel in St. Louis, MO.  Your commentators Joe Galli, Tim Storm, and Velvet Sky have the call, and they are still wearing those sweet blazers.

NWA, hook me up, will ya?  Shoot me a number for how to purchase it, or put it up at Pro Wrestling Tees.  I ask so little.

We head to The Podium, where Kyle Davis is with Thom Latimer and the NWA Women’s Champion, Kamille.  There’s some cheers for Kamille, but man, does St. Louis hate Latimer.  So much so, that when Kamille gets the mic, she asks, “How are y’all gonna clap for me, and boo my man?”  She even questioned how “Conspiracy Corgan” managed to put her in action two nights against two women from two other companies (“Legit” Leyla Hirsch from AEW and Chelsea Greene from IMPACT), and *still* managed to beat them to retain her title.  She’s upset she had to do double duty, and that Corgan was trying to get her man hurt.

To paraphrase the new Captain America:  She’s way out of line, but she’s right.

Now Latimer gets on the stick, upset that he was stuck in a street fight.  Bravo, he says to Corgan, and sarcastically applauds him for looking after talent.  (Me:  Trust me, it could be worse.  But check our Dark Side of the Ring archives to see the other side, Latimer).

Now Kyle Davis brings out Trevor Murdoch, who is holding the Ten Pounds of Gold, and cleaned up damn nice in a natty sport coat.  Kyle also mentions that Nick Aldis will not be here, as he requested to take a sabbatical from the NWA.  Trevor gets on the mic, and…well, let me have the champ speak in his words:

“When you are going for something that is so important to you, as Nick and I did…Nick and I battled and gave everything we had at NWA 73.

The men that have held this world title; it’s a very short list. And the same men that won that title, they also experienced losing that title. I know one day there’s going to be somebody bigger, badder and stronger, and most likely will whip my ass.  I’m gonna give them a hell of a fight first, but it’s gonna happen. So it’s not lost on me what Nick Aldis has done, and the respect that he has earned from everybody in this room. So as I sit here looking at this same room. Nick Aldis; thank you. Good job, and this company needs you. Whether I like you or not, you’re good for business. So I hope to see you back soon, and maybe you and I can have a sit down and work this out like men.”

A classy way to start his first reign as NWA champion of the modern era.  Thank you, Trevor, for setting the tone.

Kyle Davis and May Valentine is now at The Podium with Colby Corino, Da Pope and Jax Dane, who were among the winners during The Champion Series, and each man has a chance at a title opportunity down the road. She asks each man what their plans were, and Corino says it was he who won the whole thing for his team.  Heck, he says, he wasn’t even picked by Pope or by Red Velvet (ha!). No Valentine goes to Pope, and tells “My Sweet Valentine” that when the opportunity presents itself, he will take advantage when the time is right. Finally, Kyle turns to Dane about his title shot, and Dane lists championship accolades, and alludes to an opportunity at the Ten Pounds of Gold since he is bigger and badder, like Trevor mentioned. Davis then asks about his tag partner Crimson and how he attacked him prior to his match, and Dane looks around. Yeah, he’s not nervous at all.

Back to Galli and Sky, and Mickie James joins at commentary (oh, and a happy belated birthday to the EmPOWERRR Executive Producer), and we now go to your First Match of the night…

Both women had big nights at EmPOWERRR, in case ya missed it, and match has both women in a feeling out process, and Skye is able to out wrestle Hogan.  That lasts all of one minute, as Hogan resets and chops Skye in the corner, and then builds steam running around the ring to deliver a running dropkick to Skye Blue.  From there, Hogan gives a Superkick to a crisp spinning neckbreaker to Skye, and a bridge for a pin and the win.

Your Winner via Pinfall:  Kiera Hogan

Everyone is praising Hogan as being the brightest flame in the business, and then Hogan comes to commentary and is hot at Mickie James, who cannot fathom why she’s in her grill. Huh.  Wonder what’s got into her?

Kyle Davis back at the Podium with Taryn Terrell, Jennacide and Paola Blaze. Davis asks Jennacide a question on her title shot she earned at The Champion Series, and Terrell takes over, much to my chagrin.  She says their team was great at NWA 73 but Lady Frost cost them the match, and forget about The Hex.

Well, well, well, look who’s here?  The new NWA Women’s Tag Team, The Hex, comes out and Marti Belle and Allysin Kay demand a little respect, and correct Terrell that Frost stole the win and they did all the work.  Kay tells Terrell not to get in her face, and Blaze challenges for the tag belts.  From there, Belle and Paola are cursing something in Spanish, and then Terrell says they’ll talk later so “’kay, byeeeeeee!”, and I swear that woman gives great tinnitus.  Even as La Rebelion come out to check the upcoming tag match, the see what going on at the Podium and I believe they have the same thought I do:

This is some White People Nonsense.

But let’s go to the tag match taking place…

This match is for a spot at qualifying for the NWA Tag Team title tournament to see who will face La Rebelion.  Start of the match is standard fare, until Yuma gets Stanley in a headlock, and Stanley complains that he is damaging “America’s jawline.”  Classic!  Tag to Freeman, and is isn’t long before Rudo and Stanley make him a Freeman in Peril.  The Rude Dudes, at first blush, have nice tag team chemistry, with a hint of douchenozzlery.  A mistake made by Stanley allows Freeman to get to his corner, and a hot tag to the Captain, and he is your Yuma en Fuego, taking is to the dudes, and tornado DDT’s Rudo to cover for the pin, but Stanley breaks the count.  Tag back to freeman, but the Rude Dues have other plans, Sending Yuma out to the floor, and isolating Freeman in a back breaker to a double stomp combo that gets the win.

Your Winner via Pinfall:  The Rude Dudes 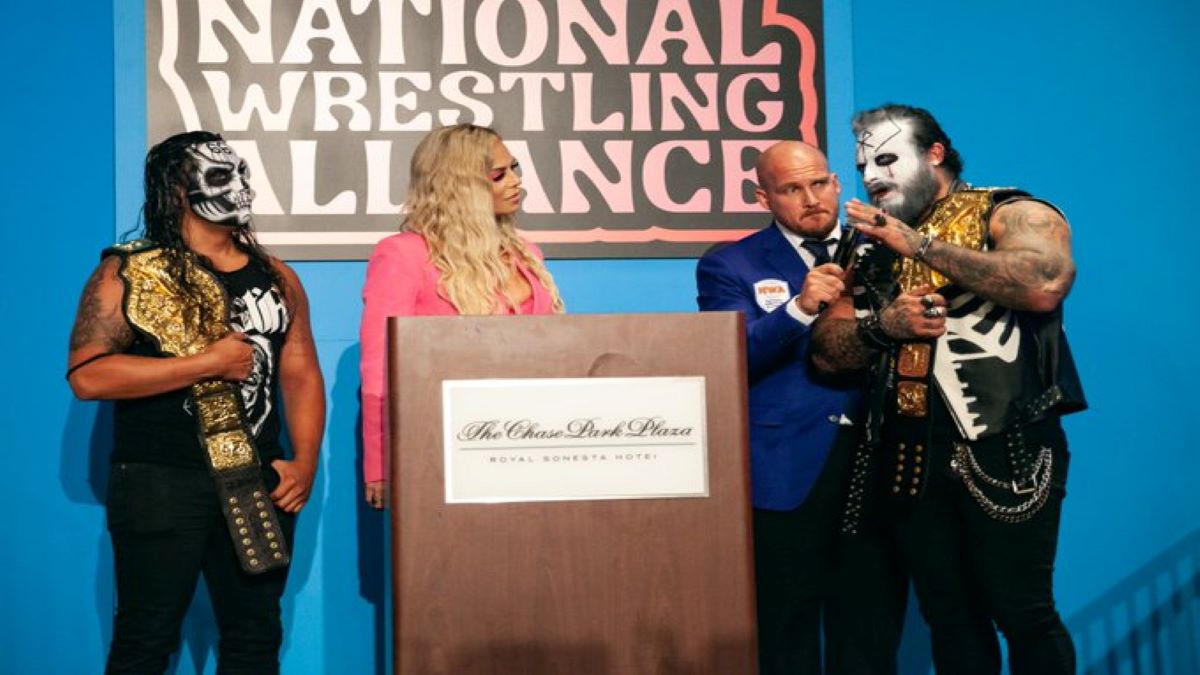 Back to Kyle Davis and May Valentine with La Rebelión.  David announces that with The Rude Dudes securing the final spot, he runs down the names of the teams that will be part of the tournament to determine who will challenge for the NWA Tag Team Championship.  They are:

Davis asks for the Tag champs response.  Bestia 666 says nothing, but MechaWolf comments that they’re being challenged by nobodies. He also says they’ll take the titles back to Mexico until the NWA have a team willing to challenge them.

As they saunter off, NWA National Champion Chris Adonis and Melina come out.  Adonis pushes the same “Conspiracy Corgan” nonsense his Strictly Business stablemates have been parroting, and Melina misses the days when Kamille never spoke.  Well, before more can be addressed, Davis mentions James Mitchell (Mitchell: “Uhh, first things first:  I am a man of the cloth, and you will address me properly.  That is ‘The Sinister Minister’, James Mitchell.”) with Judais in tow.  Judais is the number one contender for the National championship after NWA 73 last night, and Mitchell is here to serve notice to Adonis that Judais is the high priest of punishment. Adonis asks if should be intimidated by those eyebrows of Mitchell’s?

Adonis also mentions that if they mess with him, they’ll mess with all of Strictly Business, as Mitchell backs off with his protégé.

Time for a palette cleanser in your next match…

Greene is still riding the high of winning the NWA Women’s Invitational Cup and the low of coming soooo close but losing to Kamille in the Women’s title match at NWA 73 the next night.  Match starts with some nice chain wrestling, but Greene gets Paige with a knee in the corner.  Her form is good, and Greene gets a penalty kicks to Paige’s face, and Greene covers, but gets a two count.  Greene sets up for the Unprettier, but Paige manages a roll up and…Paige gets the Pin!  The Hell?!

Your Winner via Pinfall (!):  Kenzie Paige

As Paige cannot believe her luck, Greene slowly starts getting unglued.  Remember that time when Mankind years ago metamorphosed to turn back to Cactus Jack, much to HHH’s horror. 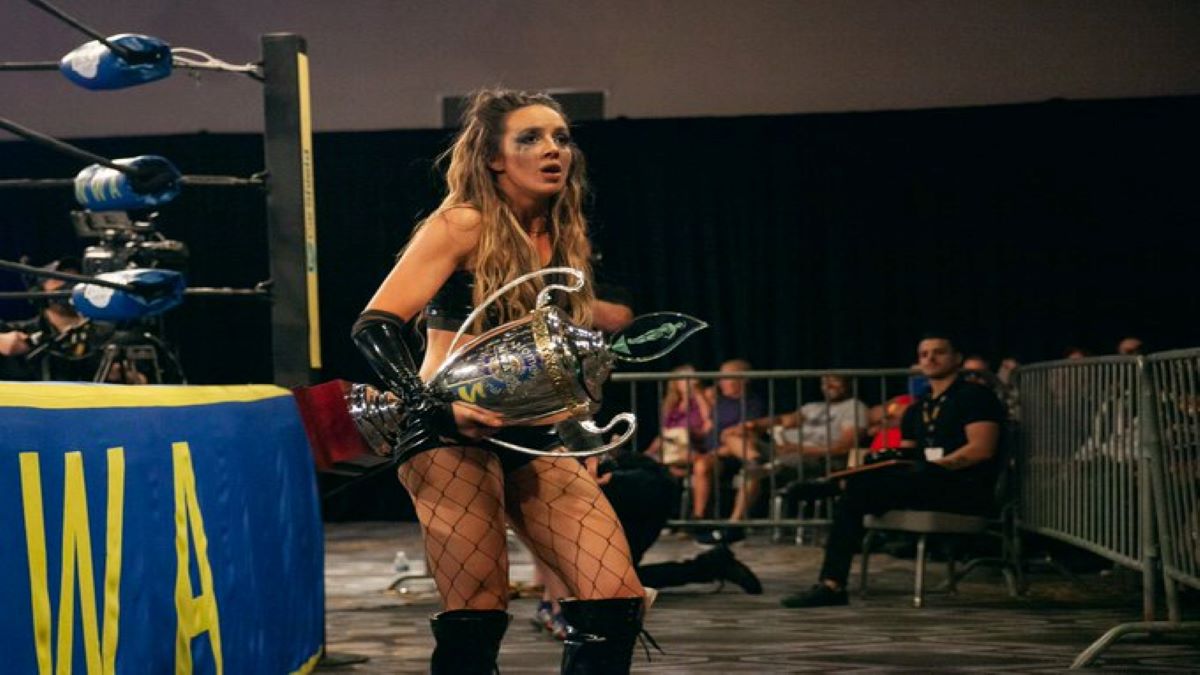 Yeah, it was kinda like that, and fans are starting to see the return of The Hot Mess.  God help us all.

Back to May Valentine, who’s with “Cowboy” James Storm, and he’s still a free agent. He tells May that during the pandemic, it taught him what was important:  family.  From teaching his daughter too drive to having his son deliver an elbow drop from the couch (don’t judge, you parents have done it, too!).  But Austin Idol comes out and pumps up Tyrus and he promised top tier talent for tonight’s Main Event, which is for…

Well that’s a bit up for debate, as Black Jeez and Jordan Clearwater both come out.  Clearwater thinks he is competing but that is a no go, mon ami… 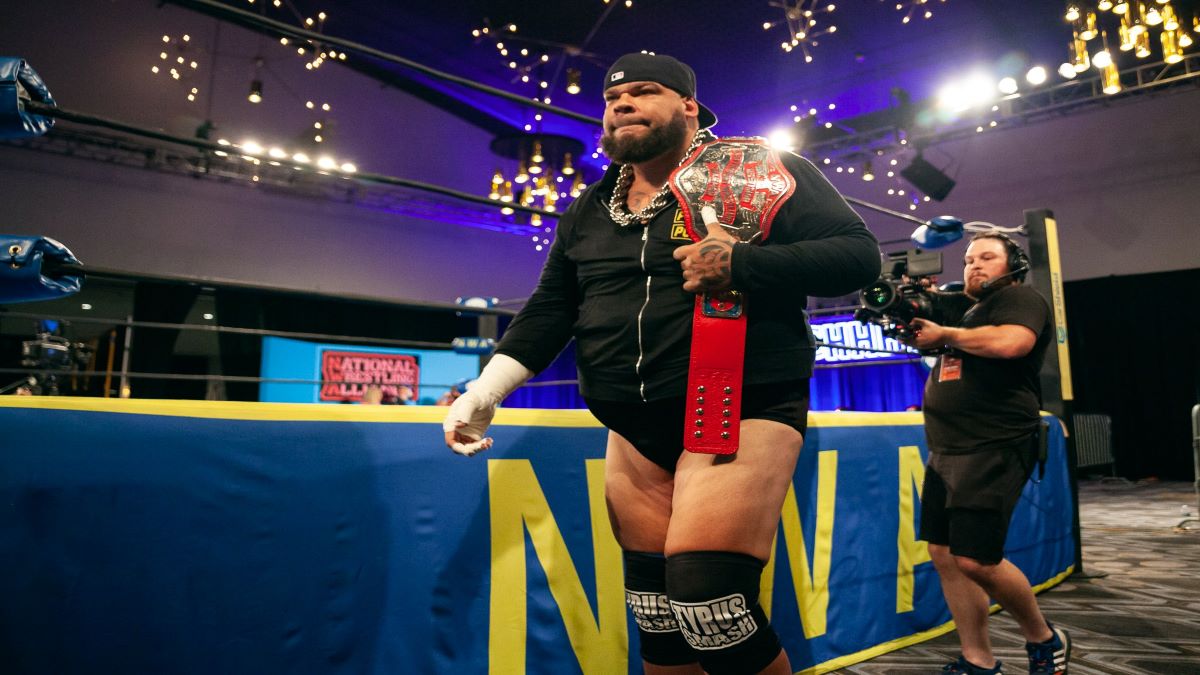 Clearwater is upset this, and is arguing with Jeez.  As Jeez-y steps in, the match will be contested under Television title rules, and right at the bell Jeez attacks the legs of Tyrus before he can get his jacket off.  Jeez goes to the high rent district, and gets a splash for a count of one.  Jeez doesn’t let up, and gets a short DDT to cover for a two count.  Back up top, Jeez with a missile dropkick for another two count.  Jeez hits the ropes, and as he leaps midair, Tyrus swats him down, and now the jacket is off, and it’s Tyrus Smash.  He launches Jeez across the ring with a fallaway slam.  One heart punch later and Tyrus pins for one, two, and three.  ‘Nuff Said.

Your Winner via Pinfall:  Tyrus

Clearwater is still incredulous about the whole thing, and wonders if he hitched to the wrong bandwagon, but that is another story as the show goes to credits.

A solid show, tonight. Nothing earth-shattering but a nice slow build, from the tag tournament, to the Television title picture, to the first day of Trevor Murdoch’s title reign.

between now and their announced PPV in December, the NWA will continue to build up to that moment and it will be fun to see what takes place. For now, we’ll see ya on seven!