NXT: Going through the motions till revamp 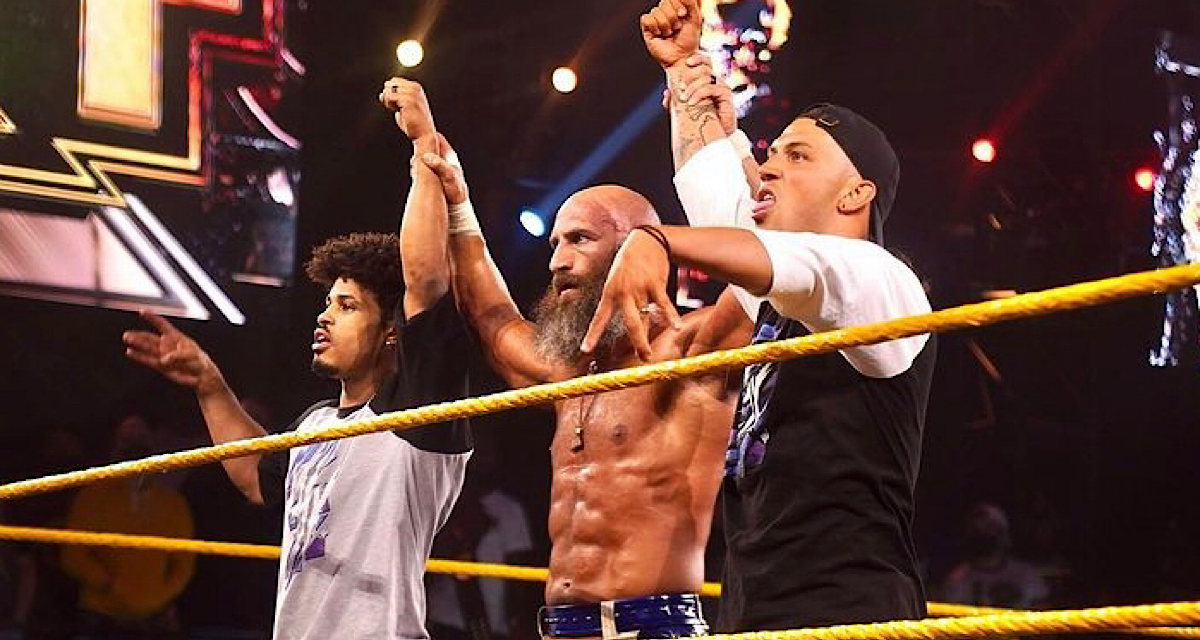 Famous rapper Wale revealed NXT’s upcoming redesign on Twitter, which showed a new logo and color scheme for the current black-and-gold brand. Fittingly, the aesthetic theme is a combination of different colors, which coincides with NXT’s paint-by-numbers approach to programming these days. Nevertheless, tonight’s episode was headlined by a solid main event between Tommaso Ciampa and Ridge Holland heading towards the imminent winds of change.

Tonight’s opener is Rose’s in-ring return to NXT as Jayne and Dolin’s leader of sorts. Along with NXT’s other changes in direction, she doesn’t exactly fit the black-and-gold brand’s wrestling style like Sarray, for example, does. But commentator Wade Barrett inputs the line, “put the glamour to one side, she can fight ugly with the best of them.” Well, after some “bowling shoe ugly” back-and-forth action, Sarray connects with a signature dropkick, and Jayne quickly grabs a towel to shield Rose’s face. The referee counts to ten, and Sarray is announced victorious via countout. Out of every choice to open tonight’s episode, this certainly was one.

The 6’5” Hudson obviously has size advantage, on top of O’Reilly’s taped-up ribs. He throws O’Reilly around while targeting the midsection before picture-in-picture, and along with physical presence, Hudson has some amusing cockiness. The matchup is pretty lethargic before O’Reilly finally breaks loose, but Hudson keeps majority control. Eventually, O’Reilly hits two dragon screws, delivers a top-rope knee drop, and cinches the knee bar for three. Even though O’Reilly emerged victorious, Hudson on the other hand really shined.

After surviving a match-of-the-year contender against WALTER, the new NXT UK Champion Ilja Dragunov makes his first championship entrance. He cuts a fired-up promo to “you deserve it” and “please don’t go” chants, and it results in a peaceful sendoff.

Kay Lee Ray had a sit-down interview with Arash Markazi, whose first question was literally “what gives you the right?” — referring to Ray’s surprise appearance at TakeOver of course. She calls out NXT’s women’s division, specifically its champions.

Carmelo Hayes, the 2021 NXT Breakout Tournament winner, is interviewed backstage before Elektra Lopez and Legado del Fantasma interrupt. Santos Escobar says, “Be wise, Carmelo. And stay out of my business.”

Antonin Dvořák’s “Symphony No. 9” song starts playing, but it isn’t WALTER, unfortunately. It’s the lesser consolation of Marcel Barthel and Fabian Aichner, who seemingly have quick work ahead in Waller and Maverick. Credit again to both Imperium members for looking like shredded grapplers, whereas Waller is rocking a futbol/boxer fusion as ring gear. Admittedly, Waller and partner Maverick show great agility on offense before ultimately succumbing to Imperium’s finishing bomb for three.

The Capitol Wrestling Center is loud for “Johnny Wrestling”, which only begs the question regarding his future in NXT. Knight however has an assumedly limitless ceiling, but nothing is for certain anymore. Gargano controls the opening half with the people’s support, but Knight reverses with a shoulder tackle before commercial. Eventually, Gargano recuperates with a slingshot spear, and the competitors trade big reversals thereafter. On the outside, Lumis saves Gargano from a fall but ultimately distracts him, which allows Knight to connect with his finisher for three.

Here’s something interesting, for good or bad: the mysterious Mei Ying of Tian Sha has her debut matchup next week.

Ember Moon is interviewed backstage and responds to Kay Lee Ray’s comments about the division. She calls out Ray to a matchup next week.

It’s television official: the colorful NXT revamp is “coming”. Along with the teaser is presumably NXT’s new theme song by rapper Wale, which is actually quite nice.

The new NXT Champion Samoa Joe had a sit-down interview with Wade Barrett. Besides a ton of prewritten hoopla regarding a “precedent” for NXT, Joe really doesn’t reveal much.

Strong is accompanied by Malcolm Bivens, Hachiman, and now the Creed Brothers of Diamond Mine. His opponent Jiro is accompanied by an outlandish yellow blazer, and both are eventually hip-tossed into the steel steps. Strong keeps downward pressure on Jiro with stretches and strikes until Jiro makes the comeback. But Strong hits his lethal-looking jumping knee and finishing backbreaker for three. Everything Strong does — from maneuvers to movements alone — is so crisp. It’s beautiful.

The NXT Women’s Tag Team Championships are still a thing, and champions Io Shirai and Zoey Stark will have their first defense against Kacy Catanzaro and Kayden Carter.

Holland is of course backed by Pete Dunne, Danny Burch, and Oney Lorcan ringside, but Ciampa takes early advantage despite the numbers. Following picture-in-picture, Holland takes control until Ciampa makes his signature lariat comeback for a near-fall. However, Holland turns the tide with a neck-targeted double leg slam and stiff forearms. They trade rapid-fire strikes on the apron before Ciampa connects with Widow’s Bell for three, cleanly pinning the newly returned Holland. The lackeys don’t take well to Ciampa’s victory, but MSK makes the save and closes the show.

Tonight’s episode was perhaps the most main-roster feeling episode in a while, which makes sense considering who really has control nowadays. And much like Monday Night RAW, NXT tonight came across as cookie cutter and bland.