Colby Corino on fighting his father and his future 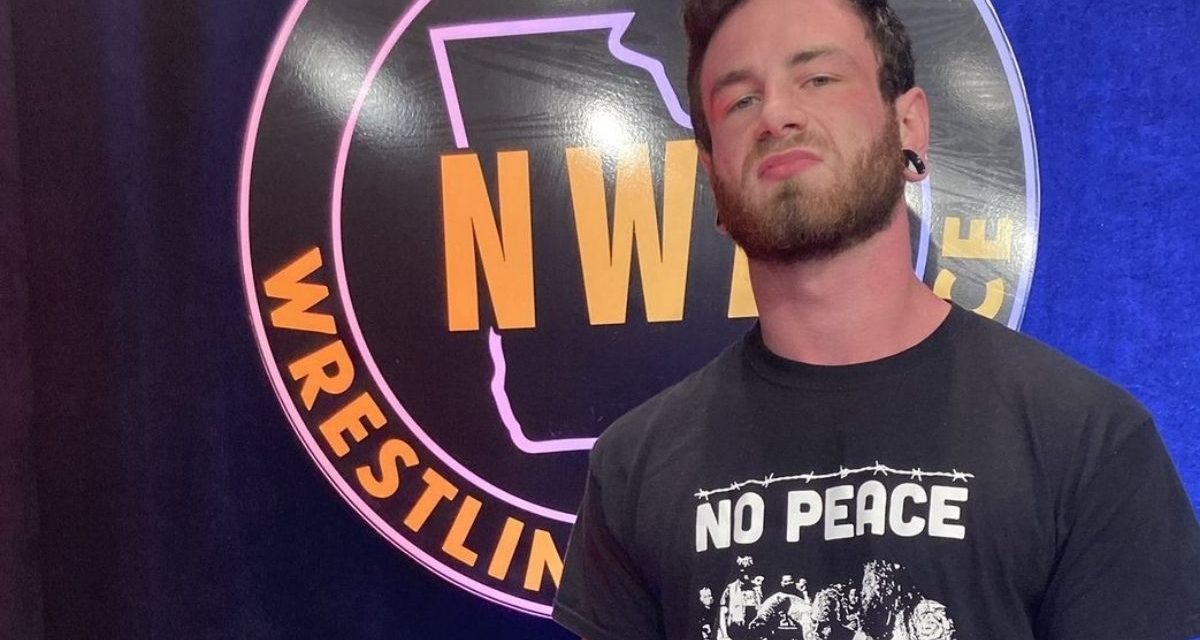 Wrestling is open. Wrestlers today are being given the chances to show their art in so many different nationally and internationally recognized promotions. Colby Corino is a second-generation wrestler who is working his way to the top and wants to show the world that he lives and breathes for wrestling.

When did he know that he would become a wrestler? “It felt like it was inevitable that I would end up being a wrestler,” Corino told SlamWrestling.net. He is, of course, referring to his fond memories of traveling with his dad, ECW legend Steve Corino.

“I’ve loved wrestling from such a young age. I was going to my first wrestling shows when I was three weeks old — that’s when I went to my first ECW show,” he said. There have been many stories about children of wrestlers being pushed away from pursuing a career in wrestling, but Colby Corino had a different road. Colby said that his dad never really pushed him either way, but when the time came “my dad was super supportive of my decision to go into the business.”

Fast forward 24 years to 2020, the year the earth stood still. The wrestling business was in a state of uncertainty. The younger Corino was helping train the new recruits from Premier Wrestling Federation (PWF) in the Carolina Wrestling Academy (CWA). They, like many other promotions, were running empty arena shows. “We were doing a lot of studio tapings with no fans. And it’s so much different than wrestling with a crowd. I got so used to it over the past year that when I finally started wrestling in front of crowds again, it felt weird.”

It was at this time that the young Corino learned of the importance of a live crowd. “I have quite a few students that started there (PWF and CWA) and have never actually performed in front of a crowd until very recently,” he explained. “And from what I can tell, it’s like having a crowd there gives people that extra boost. It gives you that extra adrenaline rush, like it makes you go a little bit harder. It kicks you into next gear and I feel like I go a little bit harder.” 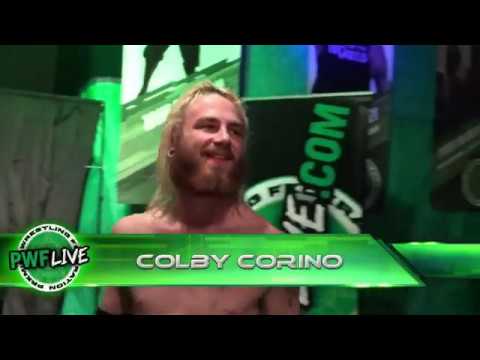 While life on the road is also something that Corino has had to transition back to, he is more than welcoming of it. “I try to travel with my family. I like spend time with my with my son and my fiancé. They like to go to the shows.”

With being a veteran of the sport, Colby Corino was able to speak to the differences of being “in the system (WWE)” versus the life of an independent wrestler where one is their own boss and creates their own opportunities as they travel from city to city. He attempted to explain the differences, notable since his father works as a producer for WWE. “There’s so many advantages and disadvantages to both, like the corporate wrestling, as I like to jokingly refer to it. They have all the catering, they got it nice, like the nice facilities and all this. I’m trying to think of the right words for it, there’s so much going on and it’s not that it’s overproduced, but it needs to be a lot more produced, a lot more overseen. Then on an indy level, I feel like that I can be a little bit more Colby Corino. I have a little bit more freedom with what I do and I really enjoy that freedom.”

The indy and WWE scenes collide tonight, August 27, as a part of a huge weekend for young Colby Corino. Not only does the 12-year veteran turn 25, but he will be celebrating his birthday by wrestling his father at a PWF show in Jacksonville, North Carolina. The younger Corino thought his dad was retired.

“I didn’t even think it could happen. It just happened on a whim. I was trying to plan my birthday show that me and PWF mutually do every year and I just invited people I think are friends so we can have the craziest card we can,” said Corino. “And this year, someone mentioned to me, ‘Why don’t you wrestle your dad?’ And I just like brushed off real quick. I was like, ‘Naw we can’t do that. That’s not going to happen.’ Then I shot him a quick text asking him, ‘Hey, could you maybe do this?’ And then I guess I caught him on a good day because he went and asked and they [WWE] said yes.” 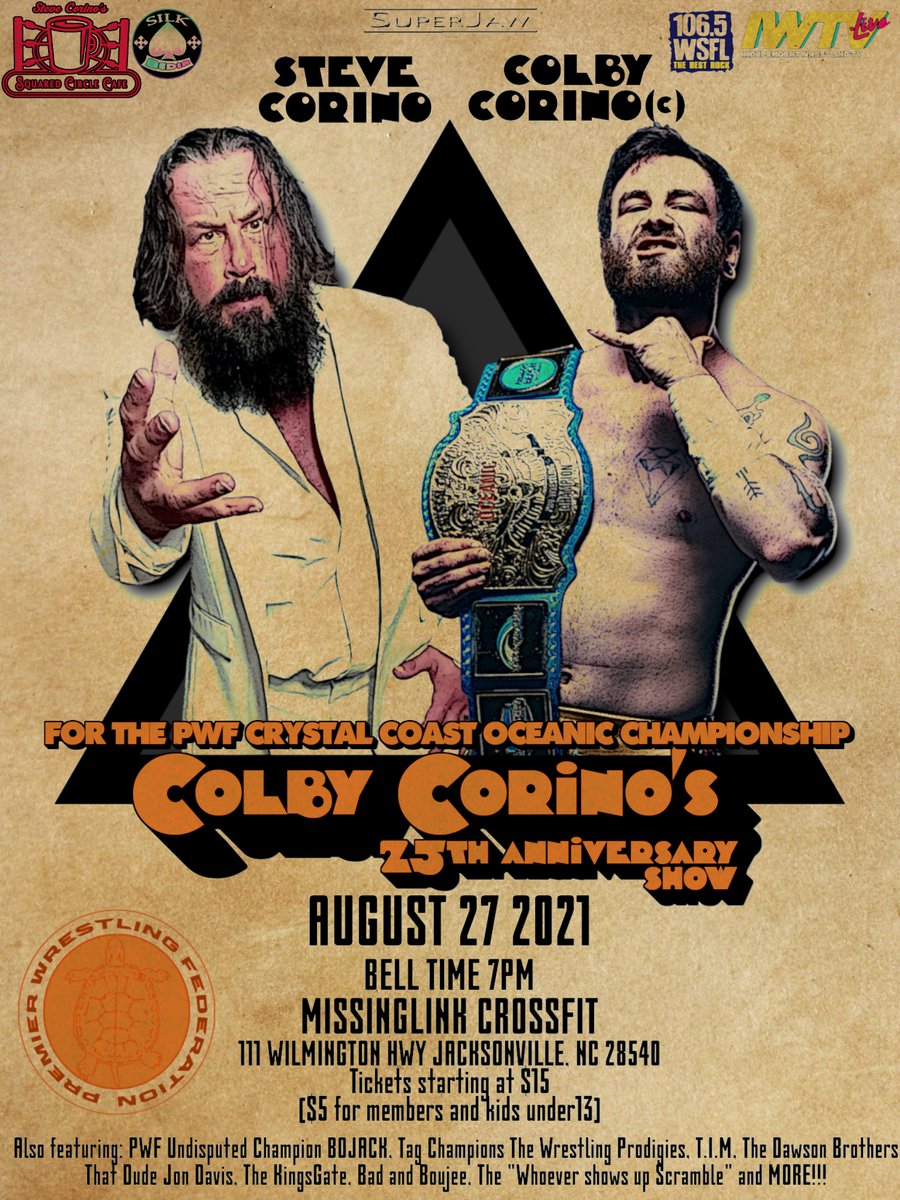 While happy about wrestling his dad, he is also focused on the National Wrestling Alliance (NWA), where he is a breakout star. During the summer of 2021, Corino was part of the NWA Champions Series, joining Team Pope/Velvet. Corino faced off against Sal Rinauro in the deciding match, and picked up the victory for his team. “It’s like someone recognizes what I’m doing. So now I have to work even harder because I know someone is watching and I know people are watching,” he said.

That said, he is still undecided on which championship title he will challenge for as prize for being part of the winners of the Champions Series. “I’m still not sure which championship I’m going to go after. All the belts have such prestige to me and they’re all very important for a different reason,” he said, his face lighting up in the Zoom call.

Corino will be part of the NWA weekend festivities in St. Louis, with two days of a fan fest, and two pay-per-views — the all female EmPowerrr on Saturday, August 28, and the 73rd Anniversary show on Sunday, August 29, which features a special appearance by the legendary Ric Flair. Like many fans, Colby is excited for the women’s PPV. “It makes me so happy to see Mickie James putting together the EmPowerrr pay-per-view, especially when she’s picking people like Jamie Senegal, who is one of my best friends from like a while back. I just really like looking at the talent that she’s assembled and all the matches. It’s going to be a great show,” he enthused.

At the NWA 73rd, Corino will likely take part in a battle royal to determine the next contender for the NWA National Championship. He thinks. “I’m almost positive I’m in this battle royal. With the battle royal, I feel we get another shot at a NWA championship. But I feel like that’s just an insurance policy… So I’m just very intrigued to see what the rest of the weekend has to offer with NWA 73 and beyond.”

Corino has championship aspirations, it runs in the family between his father and his aunt, Allison Danger. “I’m just aiming for some gold, I feel like that, a Corino without NWA, gold is, I don’t know, it feels wrong.” 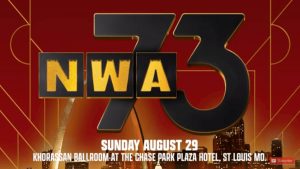 The so-called forbidden door has been opened, with so many promotions welcoming competing wrestlers to shows. Corino is ready. “I can’t talk about a lot of that, but I’ve been filling out my calendar just this past week, and the next few months are looking pretty crazy in a good way. Like if you like indy wrestling, I think I’ll be popping up in a few of your favorite places, you know?” he said with a grin.

Wrestling is in his blood. While that term that is often overused — like iconic — with Colby Corino, it’s more than just a cliché.

PWF are celebrating Colby Corino’s 25th and you can watch Corino versus Corno live on IWTV (https://independentwrestling.tv/). You can also catch the NWA Empowerrr pay-per-view on Saturday, August 28th and the NWA 73rd pay-per-view on Sunday, August 29th, both through the FITE TV app.