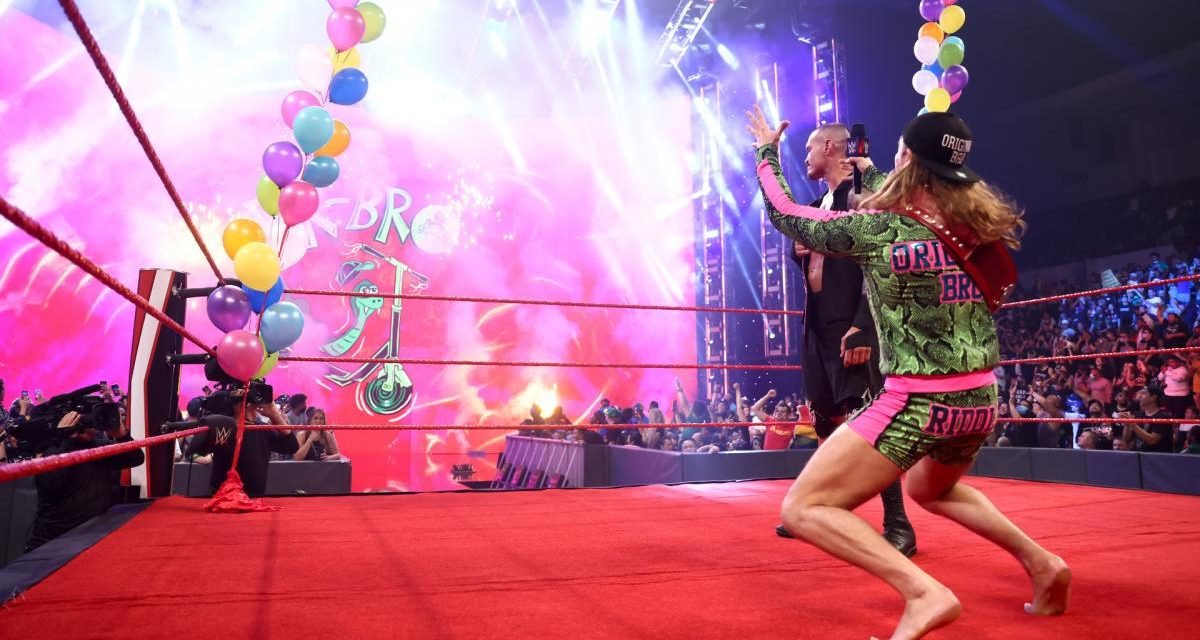 There’s plenty of fallout from SummerSlam to deal with, tonight. Becky Lynch returned! To win the Smackdown Women’s title. Brock Lesnar is back! And confronted Universal Champion Roman Reigns. What does that leave for Monday Night RAW? Well, RK-Bro won the RAW Tag Team titles. Good enough for me! Let’s had to San Diego.

The All Mighty WWE champion, Bobby Lashley, kicks off the show after defeating Goldberg on Saturday. I wish I could say that was the ne of it, but Goldberg’s kid jumped into the ring after the match and got put to sleep in the Hurt Lock. MVP wants to address what happened at SummerSlam. They were shocked that Goldberg would challenge Lashley to begin with. They didn’t know Goldberg was going to show up with his son. MVP calls Goldberg a coward for quitting.

Lashley won’t apologize to Goldberg’s son, since he did jump the barricade and attack the champ from behind.

New United States Champion, Damien Priest, walks out to confront Lashley for being a bully. He challenges Lashley to a match and calls him a coward if he doesn’t accept. The two come to blows and MVP accepts the challenge.

Lashley takes down Priest and works him over in the corner.  Priest counters a spear with a kick, but is attacked from behind by Sheamus. The ref calls for the bell.

Lashley and Sheamus team up on Priest, until Drew McIntyre runs in to make the save. A big boot take out Sheamus and then sends Lashley over the top rope to the floor. Priest sends Sheamus into the crowd and Drew slam Lashley on the announce desk. I smell a tag team match  coming.

Drew McIntyre and Damien Priest vs. Bobby Lashley and Sheamus

Go to love joining the match in progress coming out of the commercial break. Priest kicks Lashley off the apron. The champ has had enough and heads to the back, even after Sheamus connected with a jumping knee. Sheamus can’t believe that Lashley is walking off, which allows McIntyre to tag in. Drew connects with a Claymore kick and covers Sheamus to get the win.

Doudrop is asked by Sarah Schreiber about what happened at SummerSlam. Doudrop says it was a mistake partnering with Eva Marie, but she is keeping the name. And next time she see her, but hold that thought. Eva slams a road case into Doudrop an beats her down.

What is this? They seriously have Kross out here looking like Lord Humungus. He’s not wrestling in the mask, but he has the crisscross straps across his chest. Kross beats down Ricochet and then powerbombs him. He follows with the doomsday suplex. Kross locks in the Kross Jacket and Ricochet taps.

At SummerSlam, Baron Corbin got dropped during an interview for Big E and Logan Paul.

Backstage, Bobby Lashley and Sheamus get into it.

John Morrison welcomes Logan Paul to the show. Morrison wants to know what is next for Paul, but they are interrupted by The Miz. He’s upset that he wasn’t introduced on the show. The crowd in San Diego does not like Logan Paul. Miz and Paul yell at each other, then Miz and Morrison yell at each other. Xavier Woods crashes the party because he is taking on Miz, tonight.

So, Elias is burying his music career?

The more Morrison tries to help, the more he hurts the Miz. Johnny Drip Drip throws water down on the floor to slip up Woods, but instead, Miz goes crashing into the ring steps. Later in the match, Morrison tries to squirt Woods with the drop stick, but Xavier ducks. Miz also avoids the shot of water, but he had to stop from hitting the Skull Crushing Finale. Miz shoots a look at Morrison. Woods rolls Miz up and gets the pin.

Morrison tries to apologize, but Miz isn’t having it. He beats Morrison down in the middle of the ring. Miz connects with a thrust kick and follows with the Skull Crushing Finale.

Nikki A.S.H. approached Rhea Ripley earlier in the day to ask if she would team with her tonight against Nia Jax and Shayna Baszler.

Reggie explains to us how he learned to be quick on his feet. He stops R Truth and Akira Tozawa in their tracks by buying them ice cream. He then leaps to safety and takes off in the ice cream truck.

Randy Orton still wont give Riddle a hug and tells him he doesn’t like surprises or celebrations. He tells Riddle not to do anything stupid.

Before the match, Mansoor told Ali he doesn’t want any help. He wants to win the right way.

Mahal with a suplex and then pulls Mansoor up from the apron. Mansoor hits a cross body, but can’t get the cover. Mahal kicks Mansoor into the corner then drops a knee. Mansoor with a jawbreaker and follows up with a drop kick. Mahal lands a thrust kick and stomps away at Mansoor in the corner. He ignores the refs instructions and blows through the five count. The ref calls for the bell.

Ali yells at Mansoor to start doing things his way.

Drew McIntyre and Damien Priest get to know each other. Priest thanks Drew for having his back. The two are going out to hit the town tongiht.

Charlotte Flair, your new RAW Women’s champ, hits the ring. She brags about being a 12 time champion. She doesn’t need friends, family or the WWE Universe. She has all she needs in the title. Flair puts every single female in the company on notice. She is starting a new revolution, tonight.

Alexa Bliss and Lilly walk out to congratulate Charlotte and introduce themselves.

Nia Jax and Shayna Baszler aren’t exactly getting along after Nia teamed with Charlotte the other week.

Nia and Shayna concentrate on keeping Nikki from making a tag. Shayna works her over and whips her into the middle turnbuckle. Jax tags in and crushes Nikki in the corner. Jax gets tripped into the corner, but tries to knock Rhea off the apron. Ripley dodges. Jax carries Nikki into the corner, but Nikki is able to kick Shayna to the floor. Nikki cuts Nia down on the ropes and is able to crawl across the ring to get the tag.

Ripley takes the fight to Baszler with a drop kick. Jax is sent to the floor. Rhea with a Northern lights suplex, but Shayna kicks out. Ripley with a missile drop kick. Rhea goes for a pin. Jax tries to break it up, but splash her partner instead. Nikki takes out Jax with a cross body. Ripley hits Riptide on Baszler and covers to get the win.

Morrison says he and the Miz are though and he will end him next week.

Riddle is in the ring, regaling us with the history of RK-Bro. Now he wants to celebrate winning the tag team title. He wants Randy Orton to come to the ring. Orton isn’t completely on board with the balloons or the celebration. He isn’t even moved by the pyro. But wait, Riddle has a gift for his partner. He presents Orton with his very own scooter. The Viper isn’t sure what to make of the tassels on the handle bars.

The moment is stomped on by AJ Styles and Omos. AJ tries to drive a wedge between Riddle and Orton, pointing out that Riddle didn’t get anything from Randy. AJ has something for Riddle, though; a phenomenal forearm. AJ will continue to beat on Riddle until they get their rematch. Riddle says with the Viper in his corner he can do anything.

Styles misses a splash in the corner and Riddle nearly scores a pin with a roll up. Styles goes to the floor, allowing Riddle to connect with a PK from the apron. Riddle with three gut wrench suplexes in a row. Styles lands a flying forearm in the corner. AJ with a sunset flip into a Styles Clash, but Riddle fights him off looking for a triangle. AJ picks him up and both men crash over the top rope to the floor.

Styles unloads with a flurry of strikes, but Riddle with a bridging German suplex. AJ kicks out. Riddle whips AJ across the ring, but then runs into a boot. Styles with a moonsault into a reverse DDT, but can’t get the pin. Styles with a gut wrench gut buster, but Riddle kicks out, again. AJ goes to the apron, looking for the Phenomenal Forearm. Riddle catches him, but Styles drops down into the Calf Crusher. Riddle escapes and counters into a Bro-mission.  Styles reverses into a pin, but Riddle kicks out.

Riddle goes up top. Omos tries to intimidate him. The delay allows Styles to cut him down on the turnbuckle. Orton goes after Omos, only to get tossed into the security barrier. Styles picks up Riddle, hitting a torture rack bomb. Riddle kicks out of the pin. AJ looks for the Styles clash. On the floor, Orton attacks Omos with his new scooter. He is unrelenting. The distraction allows Riddle to hit AJ with a knee and drop him with the Bro Derek. Riddle covers and gets the three count.

After the bell, Orton hits Styles with an RKO. See you next week.

Despite it being the RAW after the SummerSlam, the show wasn’t anything special. Don’t get me wrong, it wasn’t bad; it was actually pretty good. Randy Orton earned RAW a full extra star for his facial reactions during the RK-Bro celebration. I haven’t laughed during RAW in a long time.