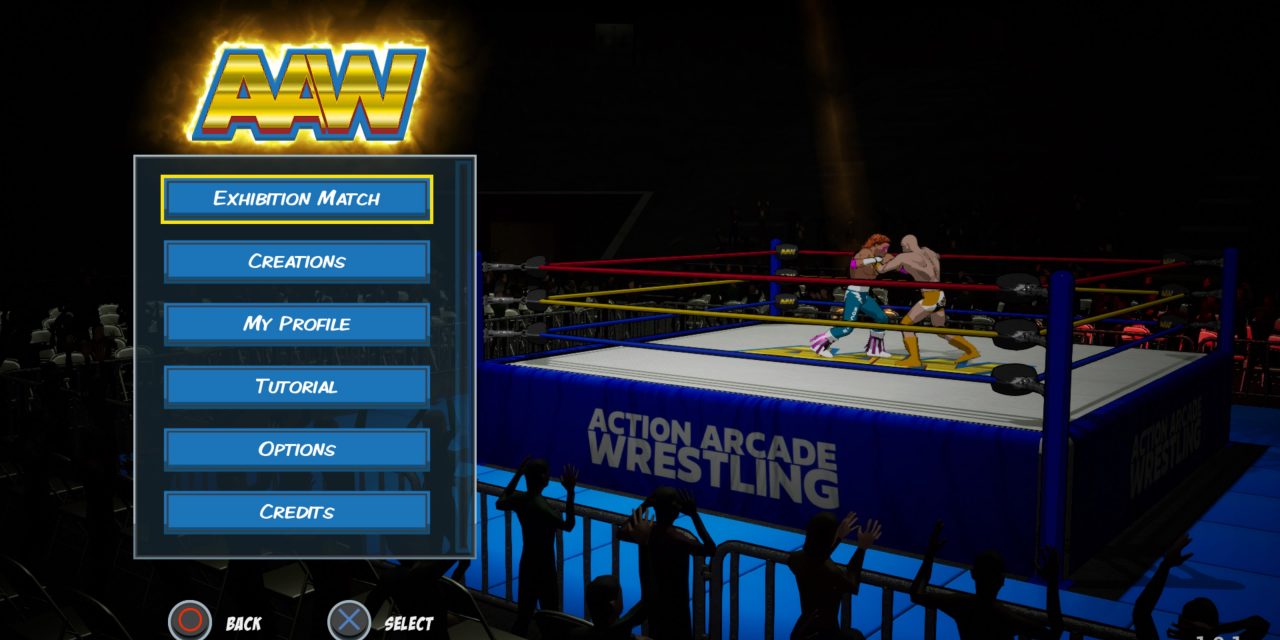 Over the last several years, the wrestling business has gone through an elite revolution; with there being legitimate competition to Vince McMahon’s WWE. Similarly, the wrestling video game market has seen an increase of titles to challenge what was once a one game monopoly in WWE’s 2k titles. From the resurgence of Fire Pro Wrestling to RetroMania, there have been titles to fill the gaps where some think WWE’s title falls short. Enter Action Arcade Wrestling (AAW), a 2D Arcade wrestling game that merges many fan favorite aspects of the WWE games with the nostalgic feeling of the N64 and classic LJN gameplay.

As soon as you start the game you will notice that the graphics have a comic book/cartoon style to it. This simply works. The cell shading gives this game a unique look that is sure to appease those who want the latest, greatest looking graphics in their video games but also those who have a nickering for nostalgia. For those players who remember playing the old LJN wrestling games, the look and feel of the games may bring back some good memories. The shadows and shading give the graphics a more mature and updated look, one that is for sure welcome to anyone wanting to play this game. 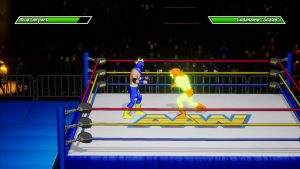 One on one Match.

AAW utilizes a two-button system that makes it super easy for anyone to pick up a controller and start playing. This is a huge win for the game because it allows for players of all levels to just pick up a controller and start having fun with their friends. While a two-button system may sound restrictive it does indeed make use of the directional pad to give you a large selection of attacks and moves to choose from for your wrestlers. AAW features all of your traditional wrestling moves. As you play through various characters, you will notice that there are hundreds and hundreds of wrestling moves in this game. From backdrops and Sidewalk Slams for more traditional characters to a more unrealistic Laser guided shooting system for more unconventional wrestlers. This game almost has it all. 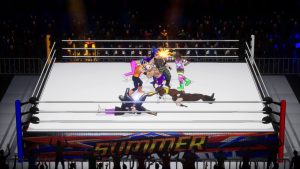 Custom Arena during a Battle Royal.

At first, the game may seem like a button masher — and if that’s how you plan to play the game then go right ahead. For those who want to take a more meticulous and strategic approach, this game allows for that as well. Striking, grappling, timing and space is the key to a successful match. Speaking of a successful match, we should talk about the various match types. This is where the game may lose some players, especially if you are wanting to play alone. There is no career, GM mode, no ladder mode, or Online mode. This may detract some solo players from the game but if you want to practice before your Sunday cold one and video games with the boys then this won’t be a huge issue. That said, you have a large selection of match types to choose from , either playing with friends or solo. From Singles matches to Hardcore matches to my favorite, the Battle Royal. The various match types are fun on their own, but I do wish there was something in the game that could potentially keep single players coming back. 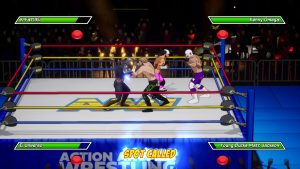 Once you are in a match, there are two ways to play. You can play a traditional match style, or you can go the more arcade style with power-ups. These power-ups appear at random intervals, giving you (or your opponent) various boosts to make the match more interesting. From extra damage to the ability of gaining health back, it does indeed add a level of je ne sais quoi to the match which is fun. Again, if these power ups aren’t your style, you can easily just turn them off while selecting your match parameters.

AAW also features a point and level system (similar to WWE’s 2k games) that allows the player to gain points as the match happens, depending on how fancy and unique you can be. These points are tallied at the end of the match and ultimately allow you to unlock rewards, including characters and belts. 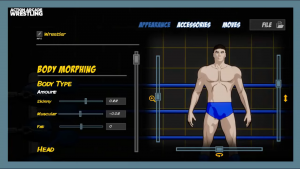 The PC software “Wrestle Labs” where you create your wrestlers, and arenas.

Now that we have talked about the graphics and fighting system of the game, let’s get to the fun part. Like many current wrestling titles, much of the fun and lasting appeal comes from its Create-A-Wrestler mode. AAW allows you to create wrestlers, arenas and even promotions. That’s right, you can be the Triple H, Tony Khan, or even the Vince Mcmahon of your friends group. Before I talk about how great the Create-A-Wreslter feature is, I need to caveat it with the fact that this feature is not actually in the game itself. To be super creative and create Arenas and wrestlers you need third party software.

With that out of the way, we should dig deep into how custom you can make this game. You have 300 slots for custom arenas and wrestlers. While searching for arenas and wrestlers can be a bit glitchy, the end results allows you to take the basic roster of wrestlers and really expand it to whatever you’d like. From John Moxley to Shredder, to the SummerSlam arena you can get into the weeds of customization. This allows you to create a custom Promotion that will make those nights with the friends a truly fun night. You can create and defend championships and be the booker you always wanted to be. This is where the game really shines. 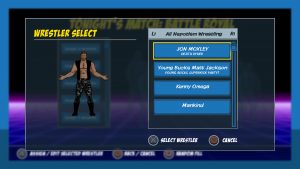 Creating a federation with title belts and all.

Action Arcade Wrestling is a fun nostalgic game, with modern day customization options, that will leave you playing for hours on hours with your friends. While the single player game modes leave a lot to be desired, the customization of rosters, arenas, and promotions allow this game to not only be fun but play with the big boys in the ever growing market of Wrestling video games.

Action Arcade Wrestling is now available for PlayStation4, Xbox One, and Steam for $14.99 with the Nintendo Switch version launching later this year.

While this game might not be the best for a single player experience, you and your friends are sure to have a blast with it as it has so much downloadable content from such a dedicated community.