Impact Emergence was ‘Something’ 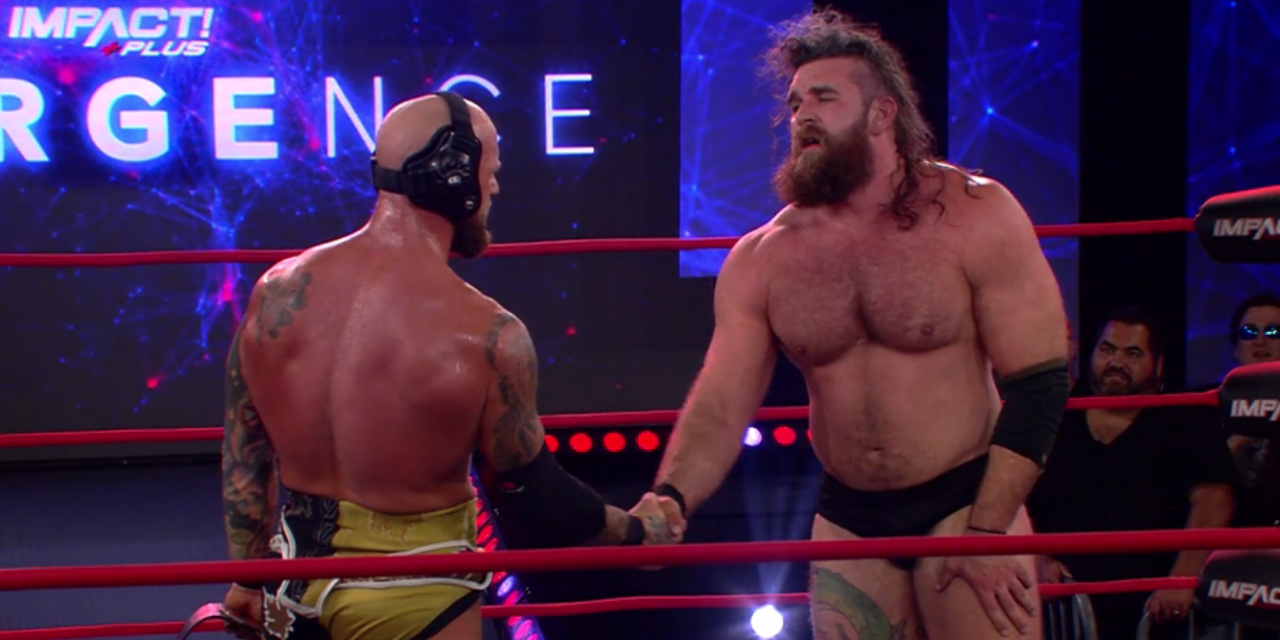 Impact Wrestling gave Brian Myers a world title shot. Yup, you read correctly. Curt Hawkins got an Impact World Championship match at tonight’s Emergence event against Christian Cage. I won’t bore you with the details as we all know how this one turns out. Christian spears, Kill Switches meandering Myers and retains the championship as everyone, including your Aunt Stella who hasn’t watched wrestling since Hulk Hogan was using Hulk’s Theme from The Wrestling Album as his entrance music, already knew when the match was announced. 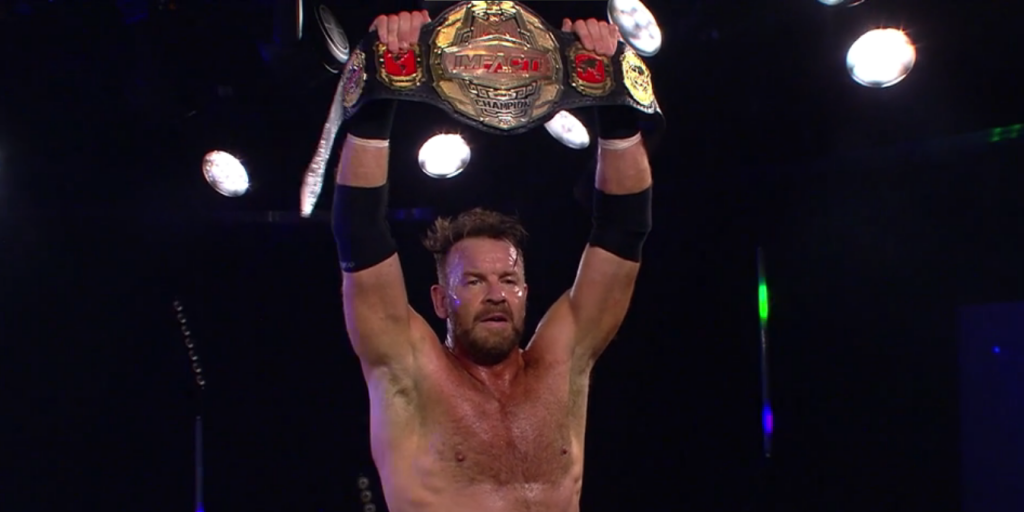 So, let’s forget about that main event, shall we? The best match of the night was hands down ‘Great Canadian’ Josh Alexander defending the X-Division Championship against Jake Something. I will admit it. I was pretty down on Something (Jake Deaner) for the longest time but tonight he really elevated his game and proved he has the skills and endurance to put on a main event match. Impact may really have something here, pun intended, humanoids. Something and Alexander put on one of the very best, if not the best, match that Impact has staged this year.

Something took Alexander out of his game early on with a nasty spear in a corner. Alexander tried to go toe-to-toe with Something. It is a big mistake that he regrets as he suffers a nasty haymaker to the jaw that almost knocks his head gear off. Something lights up Alexander on the floor with some chops against the ringside barricade. A Death Valley Driver on the floor has Alexander in a lot of trouble.

A big salute to Matt Striker from this life-long, mega Rush fan for quoting Something for Nothing.

No, you don’t get something for nothing
You can’t have freedom for free

Alexander barely kicks out of a stalling suplex but spikes Something with a flying knee to the back of the head driving him into the mat. At this point, both men are completely drained. The official reaches seven before both men get back up.

Alexander slams Something with ten, yes, T-E-N German Suplexes. They aren’t enough though to end the match. Something still kicks out. Something bowls Alexander over with a dive on the floor as he goes crashing into some lighting. Something reaching the ropes is the only thing that saves him from submitting to Alexander’s ankle lock. A weary Alexander finally retains with the always reliable C4 Spike. The two warrior shake hands out of respect for a job really, really well done.

Cardona wins the match and that upsets Shera who brutally attacks him. Chelsea Green steps in front of Cardona protecting her man.

It takes a long time for this match to start as Tasha and Rosemary do a lot of posturing. Evans and Steve get into it. He bites her forehead. She kicks him in the head. Fallah is backed into a corner so all of Decay take a bite out of him like a bunch of piranhas. Havoc and Evans trade fists but Steelz breaks that up by leaping onto Havoc’s back. Black Taurus and Rosemary hit a double spear on Fallah for the pin.

Williams jump-starts the match running riot on Maclin. Maclin finally turns things around by catching Williams in the air and powerbombing him on the ring apron. The crowd cheers for Petey. Maclin leaps off the apron hitting Williams with a Catcus Jack flying elbow. Maclin yells in Williams’ face: “Is that the best you’ve got?” he asks. Maclin clotheslines Williams to the mat and begins just slapping his face. How rude! Maclin hangs Williams on the tree of woe for a tackle and a two count. Maclin literally bites his way of a Sharpshooter, shoves Williams into the official. A punch to the “lower abdomen” and Mayhem pins Williams. Like this Steve Cutler…I mean Maclin guy. He needs a big push in Impact as he could be the hard case they really need.

A side suplex from Wilde flat out ends Rayne’s momentum. A rip cord has Wilde down for a two count. The numbers game catches up with Wilde when she has Rayne pinned. Kaleb pulls out the official. Tenille Dashwood comes in with a loaded bag. She is caught by the official so she gives the bag to Rayne. Dashwood throws Wilde into a steel post. Rayne hands over book bag pinning Wilde. 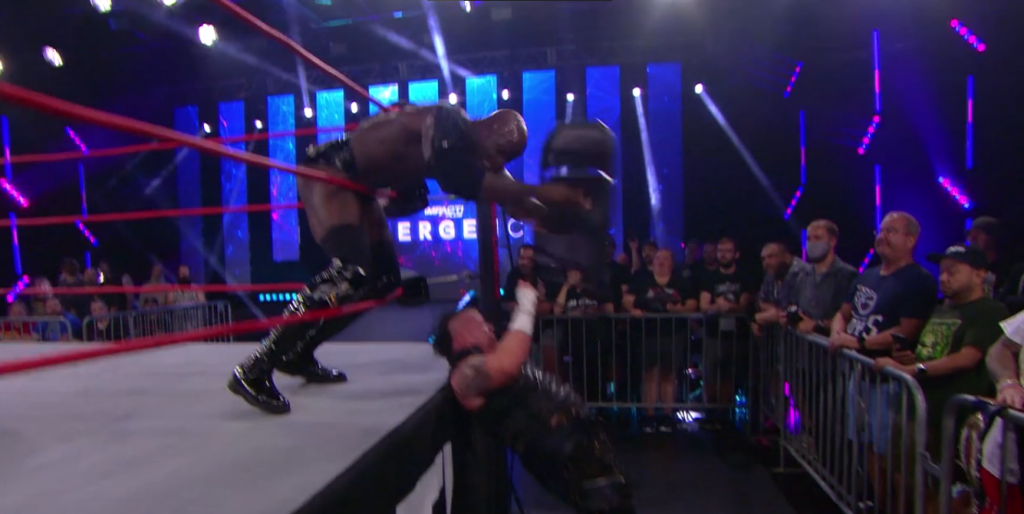 The fans are solidly behind Callihan. Moose stumbles to the ropes. Callihan clobbers him in the head with a steel chair. Austin rolls up Moose for the pin and the win. So, Sami screwed Sami?

Deonna Purrazzo and Matt Rehwoldt versus Trey Miguel and Melina

Sorry, I am just not into these intergender matches. These matches are really awkward to watch. Trey tries to do the splits like Melina and ends up injuring himself. Rehwoldt is no match for Trey’s speed so he bites his hand. The heels cut Melina off from her partner so she endures a ton of punishment. Melina escapes Purrazzo to finally make the hot tag to Trey. Rehwoldt rolls out of the way so Trey slams Melina on the mat. What a doofus. Purrazzo punches Melina in the head from the apron and Rehwoldt rolls her up for the win.

Rhino gores Luke Gallows in a corner. Karl Anderson sneaks up from behind rolling Rhino up for the 1, 2, 3. Eric Young reads Rhino the riot act afterwards.

Another mixed bag from Impact. Some really good matches and some really weak, mediocre matches. No idea why they put Myers in the main event when he isn’t a draw. They could have picked someone who would have been a match for Christian so that they could have a main event caliber match. They wasted that slot. Impact really needs to sharpen things up. If they did, they would be a serious threat to the competition.