No limit to what Skye Blue can do 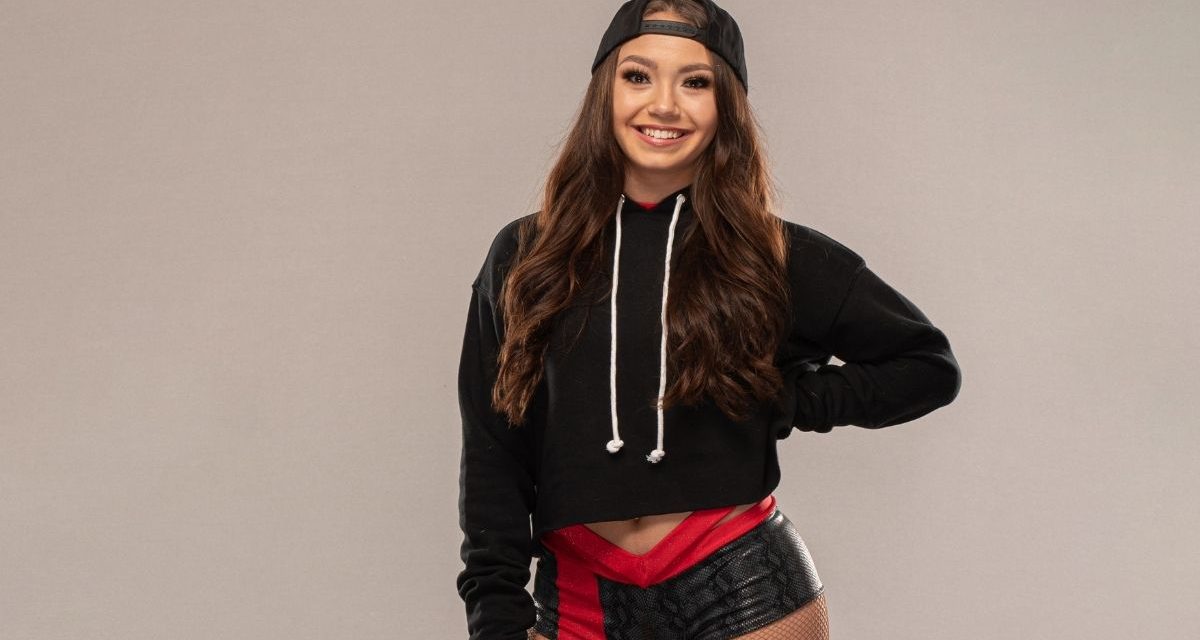 Skye Blue knows she’s not the biggest name on the upcoming all-women’s NWA Empowerrr pay-per-view, nor is she anywhere close to being the biggest woman size-wise on the show, reaching 5-foot-2 — with a snapback. But she proposes that she is probably the biggest nerd when it comes to wrestling on the show.

On the line from her Chicago area home, she said is was “the ultimate underdog, but like a dorkier one.”

What you see is what you get with Skye Blue.

“I’m very much myself times 1,000 in the ring. I know everybody’s like, ‘Oh, you’re small.’ But when I was originally trained, I was the only female so I wrestled men for my first few years of my career. I’ve always been told, ‘You’ve just got to be one of the boys.’ I’m just kind of me, a dork, a weirdo. But I love wrestling so much, it’s become my life, my everything. So I am wrestling, if that makes sense. My life revolves around it.”

On the NWA Empowerrr show, Saturday, August 28, Blue thinks she’s on the pre-show, facing Kenzie Paige. Or Christi Jaynes. Or someone else. It’s been a bit chaotic, but she can’t wait to get to St. Louis, for the two NWA shows at the historic Khorassan Ballroom of the Chase Park Plaza, including the NWA 73rd anniversary show on Sunday, August 29.

There are subtle differences between a mixed-show and an all-women’s show, the 22-year-old Blue said. “We’re all wrestlers, we all are doing the same thing, we have the same goals. I definitely think girls are more calm and collected in the locker room than the guys. I feel like the guys are always the ones running around like crazy and stressing out. So I think everything just kind of goes more smoothly when it’s a woman show, if that makes sense.” 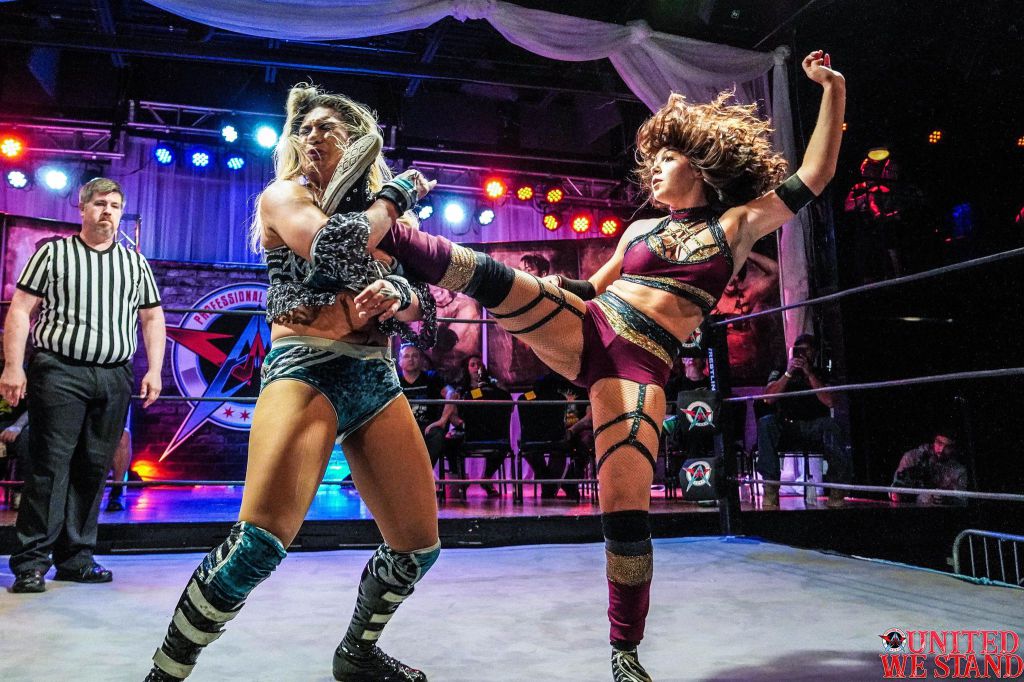 Skye Blue kicks Hyan at the AAW Pro Wrestling United We Stand show, during their I Quit Match, on July 9, 2021.

Skye Blue started wrestling as a junior in high school, and doesn’t want to say much about her early days. “I started in a promotion that I am no longer with. I was there for three years. But now I currently train with Steve Boz, Jason Hades and Doug Simmons at CSW [Chicago Style Wrestling] in Chicago,” she said. Skye Blue has been her wrestling name all along (just be careful searching for her online as there are a couple of adult performers under the same pseudonym).

In those early years, she was not allowed to sell her own merchandise. “Once I started doing the indies, and everybody was like, ‘Hey, where’s your merch?'” she explained. “And I’m like, ‘I don’t know what that is. How do I do this?’ First, I was definitely clueless, but now it’s huge. I have a lot more ideas for merch, to be unique, something that other people don’t have, to kind of stand out.”

One of those ideas are custom-decorated snapback baseball hats, by Skye Blue herself. “I wear the snapback to the ring, so I started making my own snapbacks to sell as merch. I make them myself so it makes it a little more special for fans,” she said. It’s time consuming, sure, bedazzling the hats with gemstones and whatnot, but in the end, it’s a one-of-a-kind sale. For someone who needs wrestling, it’s a good sideline. “If I don’t have a show on a weekend, it gives me something to do because if I’m home on a weekend, I normally don’t know what to do with myself.” You’ll see some of Blue’s bedazzling work on her wrestling outfits too.

The NWA Empowerrr show and the NWA 73rd will give Blue a chance to be near women veterans, like organizer Mickie James, Melina Perez and backstage producer Madusa Miceli. Skye isn’t shy about sitting under a learning tree. “I always ask questions, like, that’s my favorite thing to do. I just like sit in the corner and I ask questions and I listen. I’m a little nerd like that.” 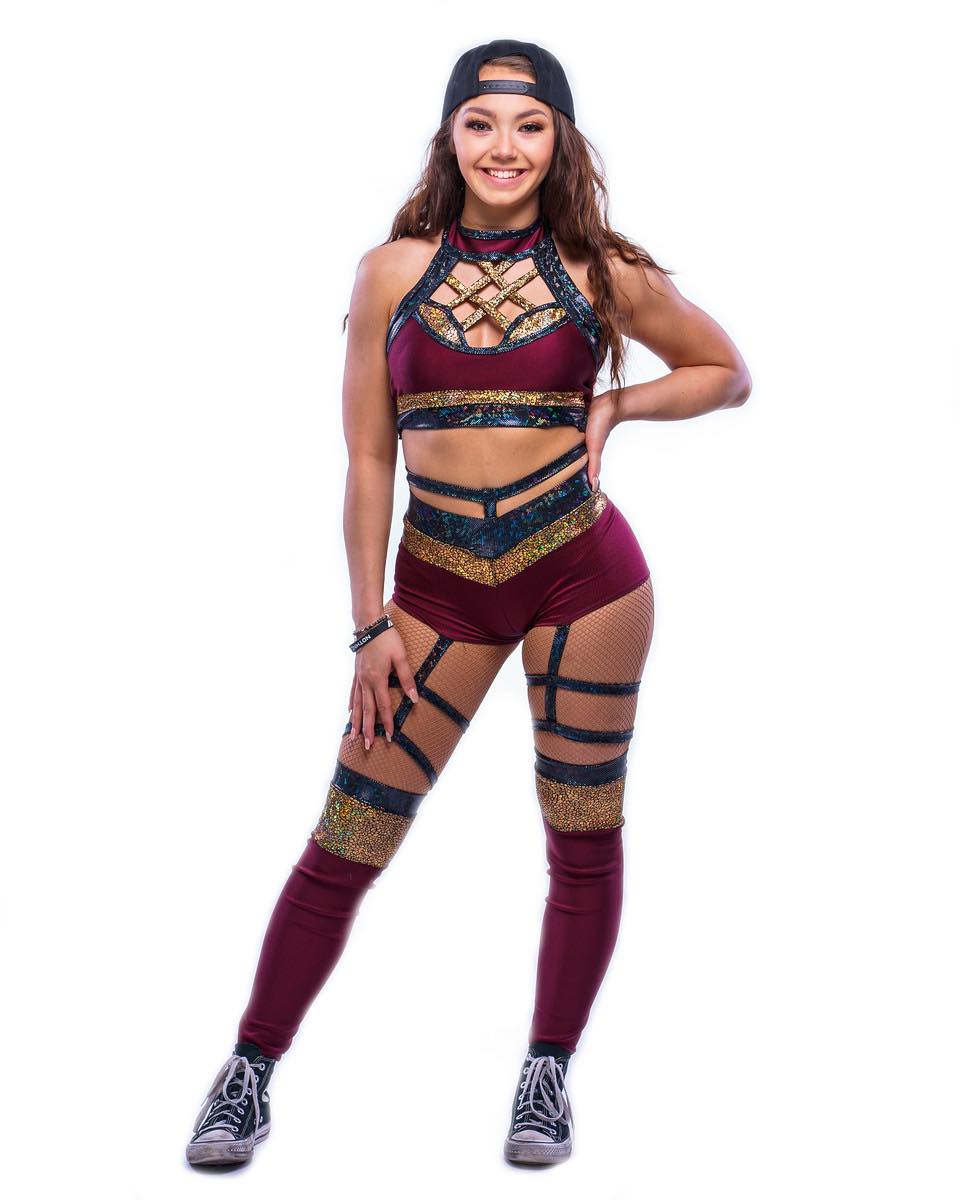 There have been mentors along the way. “I love training with Thunder [Rosa],” she said. “I still haven’t been able to wrestle her one on one. But she was one of the women that has basically showed me a lot about the industry. I’ve always loved Kylie Rae. We actually main evented a show in Chicago, and that is still by far my favorite match. She has always meant so much to me. She’s the sweetest person on the planet, I don’t care what anybody says.”

Skye Blue has a connection to Impact Knockouts champion Deonna Purrazzo, who is defending her title against Melina Perez on Empowerrr. “Deonna was actually my first match out of state, in Florida. So I absolutely love Deonna.”

No question, this is a important weekend for Skye Blue. “This is probably one of the biggest things I’ve done in my career thus far,” she said. There’s a buzz about the Empowerrr show. “People are noticing.”