AEW Dynamite: No Judas for Chris Jericho, lots of work for Tony Schiavone 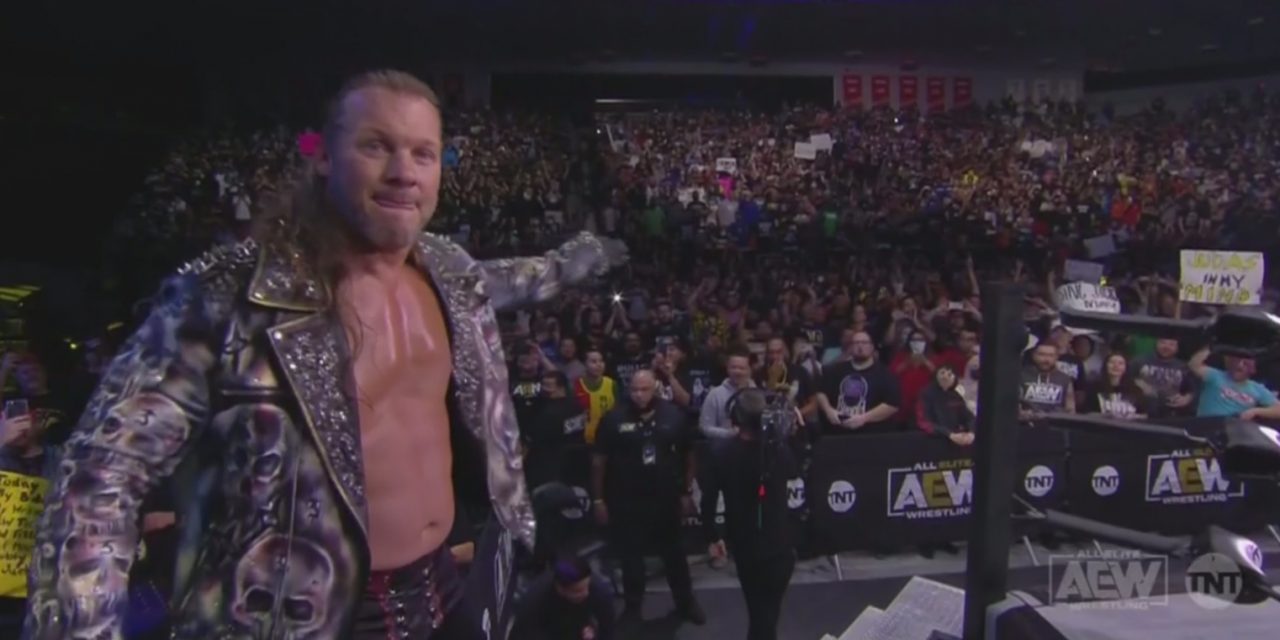 An underrated part of pro wrestling is that when time seems to blur as it can on occasion, there’s always weekly wrestling to remind you what night it is. In the case of AEW Dynamite, except for a brief spell during the NBA Playoffs, it’s a reassurance that, yes, it’s Wednesday night, and we’re more than halfway through the week. Comforting. Anyway, that’s something to ponder while we watch the action from Houston, so it’s off to the Fertitta Center we go, live on TNT.

While Jon Moxley and Eddie Kingston make their way to the ring, they are assaulted from out of nowhere not by one of their longer running groups of enemies, but by relative newcomers 2.0 and Daniel Garcia. They calmly request (OK, not really) for Darby Allin and Sting to come out right now to start their match, and the lights going out suggests that they are complying.

Hey, it’s Sting wrestling on live TV, something we’ve rarely seen even though he’s been in AEW for a hot minute now. The crowd is really into Sting, who is a good sport and takes a double powerbomb through a table, though he gets to no sell it right away. It’s only fitting that he gets the ‘W’ as well, which he does by getting both opponents to tap out to the Scorpion Deathlock at once. That’s a popular finish.

Whoa, Sammy Guevara proposed to his girlfriend in the ring earlier tonight. Shawn Spears and Tully Blanchard offer him mocking congratulations while Spears offers Pam the chance to “be on top.” Ahem.

Guevara attempts to drink in the adoration of his hometown crowd, but Spears attacks him from behind while he’s still on the ramp. This is personal, the announcers insist, even though this feud was definitely already that. Blanchard hits a stuff piledriver on the outside and attempts to intervene again, only to be ejected by referee Aubrey Edwards. In classic pro wrestling fashion that proves it is indeed an ongoing feud, Spears kicks out of a 630 splash, the kind of move that should be a match-ender. But he prevails in the end and shares a kiss with Pam.

Tony Schiavone rarely gets to finish an interview question these days, particularly with Don Callis on the premises. He praises Christian Cage for beating Kenny Omega for the Impact title on the debut of Rampage, leading Cage to insist that he’s the one in Omega’s head instead of the other way around. He calls Callis a “carny piece of shit” before leaving, which gets Schiavone to chuckle.

I nearly forgot about the angle with Dan Lambert, leader of American Top Team, but he’s not letting us forget since he seems happy to rant on the microphone. He’s got both Andrei Arlovski and Junior dos Santos with him tonight, apparently as Lance Archer insurance. That gives him a chance to run down AEW again, which I’ll give it to him, he does with gusto. Archer attempts to answer him face to face only to get jumped on the ramp by the Men of the Year. Aw man, I wanted to see Arlovski and JDS throw some hands.

Backstage, Chris Jericho discusses enduring the Labours of Jericho and the price he’s paid. Despite not having the Judas music or effect, he says he has the upper hand tonight.

The Bucks can have great matches with anyone, which is no secret at this point, but because there aren’t a whole lot of jumbo-sized grapplers on the current AEW roster, it’s fun to see them go up against Luchasaurus. I expect there will be plenty of near falls both ways before the Bucks retain, probably aided by shenanigans on the part of their entourage. Omega’s introduction of a chair to the proceedings nearly backfires when Jungle Boy hits a brainbuster on it, but the referee is occupied with the Good Brothers, Michael Nakazawa and others. Luchasaurus takes out most of them with a moonsault to the floor, but that leaves Jungle Boy vulnerable to a BTE Trigger that closes the show.

It’s a mess out in the ring, as Cage tries to come to the aid of Jurassic Express and finds The Elite is just too numerous, and even Callis gets in a cheap shot or two. This is my “Faces Need More Friends” principle in full effect. Omega nails Cage with a One-Winged Angel and Callis makes a faux three count. No one is coming to help the good guys this time.

Good for Schiavone, who sticks to it and finally gets some words in from Jamie Hayter, Dr. Britt Baker and Rebel. Way to be, Tony.

Matt Hardy has some brave words for all the Best Friends, but especially for Orange Cassidy. Ever the man of few words, Cassidy simply says that if Big Money Matt thinks he can kick Cassidy’s ass, maybe they should find out.

Is there a temporary return to the ring in store for Paul Wight? He does have some beef cooking with QT Marshall, and sure enough, Marshall and the Factory come out to trade insults with the big man. Also, someone, somewhere may have committed a HIPAA violation because Marshall has pics of the metal parts implanted in Wight’s hip. That doesn’t bother Wight at all, though, as he’s requested and been granted a match against Marshall at All Out. Welp, QT. That’s what we call a tactical error.

How about another update on Jade Cargill? She’s looking forward to beating up Kiera Hogan Friday on Rampage, that’s what’s up with her.

Because The Elite hasn’t had enough screen time tonight, the whole group has been assembled to get some news from Schiavone. There’s going to be a tag team contenders tournament starting soon, with the winning team getting a title shot against the Young Bucks in Chicago at All Out.

Though Taz needs no introductions, he introduces himself, Hook and FTW Champion Ricky Starks anyway. Starks wants a word with former partner Brian Cage in person, except Powerhouse Hobbs has already found and attacked him. Team Taz heads for the back, likely to either join in or gloat.

Really earning his dough tonight, Schiavone is on hand with Death Triangle. Pac is psyched to take on Andrade El Idolo in Chicago, in the same arena where he once beat Omega on two weeks notice. El Idolo arrives with some conditions for accepting the match, producing a document that appears to have about 500 pages.

It’s almost a requirement now that every time you mention Rosa, you need to talk about her match with Baker — which isn’t a bad thing, as that match was honestly amazing. She’s had slightly less of the spotlight since then, so I was surprised to hear she was still the No. 2 contender for the women’s championship. That means she should win here to keep going, which she does by getting Ford to tap out.

Oh my goodness, this is a Hall of Fame performance by Schiavone tonight. What a stud. Anyway, he’s with Arn and Brock Anderson, and father isn’t happy with son trying to avenge him against Malakai Black. Sorry, Brock. You had a nice run, albeit a short one.

I’m going to need a translator for Miro right now to decode his promos. Please email your application to [email protected]

Bouncing back from his earlier beating, Moxley seems to be upset with everyone, heel and face. Mostly, he seems frustrated that he carried the banner for AEW during its formative years and he’s mostly out of the world title picture. This is a lot angst to take out on Garcia, who may not want this smoke.

The a capella version of “Judas” is even better than with the music, don’t @ me. Jericho looks like he’s drawn inspiration from it to rewind the clock a few years in the early going, slingshotting himself over the top rope to the floor. MJF grabs a cameraman and gets a shot of himself flipping the bird to the Houston fans, but heads quickly back under the ropes when Jericho tries using the camera as a weapon. There’s a great reaction shot of a guy in the crowd reacting to a Lionsault, which takes me all the way back to my days doing Nitro reports for the previous version of this very site. Yes, I’m not young, and I’ve accepted it. MJF is such a good heel that it’s easy to forget he can really work as well, though of course he’s going to take some shortcuts in this one. He locks Jericho in the Liontamer, then gets the Salt of the Earth applied even after being hit by Floyd — and realizing at the last second the stipulation against him using the Judas Effect. Jericho tries to roll MJF over for a pinfall, but he fails and ends up right back in the teeth of the hold. We don’t see him tap out too often, but he does here, falling just shy of making it through all five Labours.

There’s a big episode of Rampage coming up this weekend, and All Out isn’t far off either. But there’s still some Dynamite on tap before that, so see you in seven!

Props to tonight’s crowd for helping to elevate tonight’s show, which made me like it even more than I think I was while watching, if that makes sense. AEW has turned the Omega-Christian angle into more than it seemed like it would be at first, saving the inevitable Hangman pursuit for later. And both the tag team match and the main event were quite entertaining. Nicely done, Houston fans.