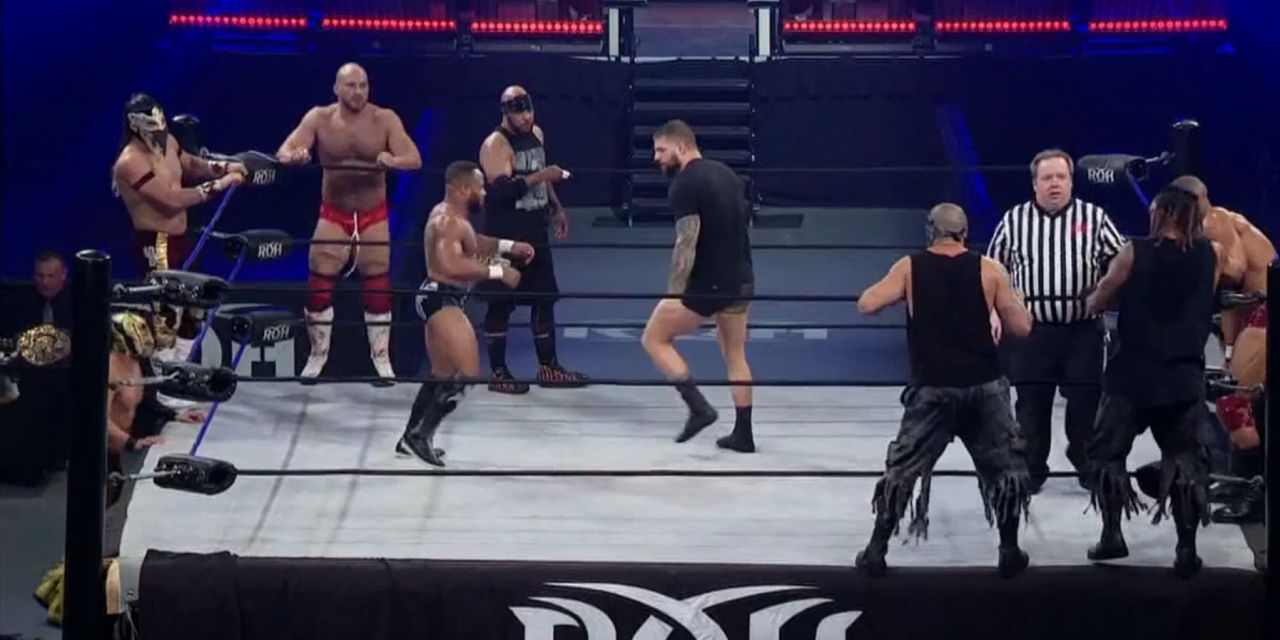 Greetings and salutations everyone and welcome to my weekly ROH TV report. We are less than week away from the next two-night ROH event, Glory by Honor. While the weekly TV hasn’t done the best job of setting up the two-night event, we get a very quick and effective set up to the main title programs for Glory by Honor as this week’s ROH TV featured the yearly Champions vs All-Stars multi-man match. Without further ado let’s get to it.

The show kicked off with our regular intro. We then got a review of the Women’s Championship Tournament first round matches. Ian Riccaboni is our host again. We have the final first round match of the Women’s Championship Tournament on today’s show as Holidead goes up against Max the Impaler. We also have a unique main event as the Champions of Ring of Honor (Bandido, Dragon Lee, Jonathan Gresham, Homicide, Chris Dickinson) go up against their number one contenders or All-Stars (EC3, The Briscoes Flip Gordan, Josh Woods).

Match 1: Holidead vs Max the Impaler

Before the match we got a very well produced video package highlighting both competitors of the match. This is always a great way to get fans invested in the match when they feature relatively unknown wrestlers. Holidead mentioned that she was trained by Gangrel and is from the “Other Side”. She also ran through her very impressive resume but considers herself the Rodney Dangerfield of Wrestling as she claims she doesn’t get any respect. Amy Rose spoke for Max the Impaler and she said that it’s a matter of time until Max the Impaler is the ROH Women’s champion. This is going to be a very interesting and unique first round match! It should also be noted that the commentators for the match were Ian Riccaboni, Caprice Coleman, and Lenny Leonard.

With both women in the ring and Amy Rose on the outside it was time for the match to get started. The code of honour was not adhered to as Amy Rose mocked Holidead. Both women showed no fear as they got in each other’s face. The match started off very even as both women locked up to see who could get the early advantage. Both women broke the lock as Holidead started punching Max with all her Fury. The punches did not even phase Max as she got right back up and body slammed Holidead twice. The favour was returned as Holidead body slammed Max. Both women were on their feet as we got another face to face between both women.

Max was able to overpower Holidead as she stretched her back and arms between the ropes. Holidead then began to use her speed as she slammed into her opponent, but Max rammed her right back into the turnbuckle. Max was now working on Holidead’s back. The commentators mentioned that the longer the match goes they believe the advantage goes to Holidead as Max’s matches have never gone more then ten minutes. Max continued to overpower Holidead as she tossed her across the ring as we went to commercial.

Back from the break Max was standing tall over Holidead looking for a camel clutch but Holidead fought it and Max kicked her in the back as she did a curb stomp to Holidead’s back. Later, Holdiead was able to reverse a Samoan Drop into a DDT but this barely phased Max as she quickly got up and Speared Holidead right back into the matt. The match was really starting to be one sided and not in Holidead’s favour. Holidead has resorted to using her brains as she gained a small advantage over Max and landed a Tope Suicida to the outside. Holidead slowly dragged Max back into the ring, butterflies her arms looking for a Darkness Falls but Max overpowers her and did a back body drop. Max set up Holidead and did her finisher called “To The Wastelands” which was a Rack Attack like maneuver.

After the match Max the Impaler celebrates in the ring as the bracket updates itself on the screen in the arena.

We then got a video promo for Matt Taven. He said that life is only as good as the memories we make. He continued to reflect on his current situation with Vincent and mentioned that Vincent is his greatest source of anger. Matt Taven continued to mention that Vincent has made things extremely personal as they were once brothers and now they are bitter enemies. Matt Taven said that at Glory by Honor he will beat Vincent in the Steel Cage and when that is done, he will continue his quest to become ROH Champion again.

Back to the ring, its time for the main event which will put the Champions of ROH against their number one contenders in a 10-Man Tag Team match.

The code of honor is adhered to by the first two competitors in the ring, Johnathan Gresham and Josh Woods. As expected, both men previewed what a Pure Match is all about they resorted to that style of wrestling for their portion of the match.

Back from the break it was Chris Dickinson who had clear control over Flip Gordan as the 10-Man Tag continued. Like many multiple people match, we got a “Everyone show off your spots” spot where each man was able to show off for a few moves. Once the storm was cleared, we saw Woods and Gresham alone in the ring again. Woods connected with a nice Suplex as he tagged EC3 back into the ring. For the first time ever, we saw EC3 and Johnathan Gresham in the ring together. This was short lived as EC3 got Gresham in a headlock as the Briscoes went to work on the ROH Pure Champion, Johnathan Gresham.

It was pandemonium again as all ten men brawled inside and outside of the ring leaving only Dragon Lee and Bandido in the ring who delivered Stereo Tope Suicida’s to Woods and Gordan. Mark Briscoe and Homicide ended up in the ring alone as we got another lengthy spot where all men got a move in. This cleared the ring for Flip Gordan and Homicide to go one on one. Homicide was looking for a 187 but Gordon was able to power out of it. Gordan hit Homicide with a superkick and picked him up and delivered a Flip Side for a very close two count. Gordan was now physically annoyed as he delivered a Paul Orndorff approved piledriver to Homicide. This time it was enough for the three as Flip Gordan won the match for the All-Stars.

After the match, Flip Gordan celebrated his win as the other 9 men battled on the outside of the ring.

This week’s TV was short and sweet. The women’s match was the best overall match from the first round of the Women’s Championship tournament. I really enjoyed that Holidead put Max the Impaler over strong with a very fun and entertaining match that some may consider a squash. While I have complained about a lack of build up with the other titles, I really loved the 10-man tag main event that was able to showcase every title program in the company. This was a fun Go-Home show for the Glory by Honor Event next weekend. Until next time, Stay Safe!