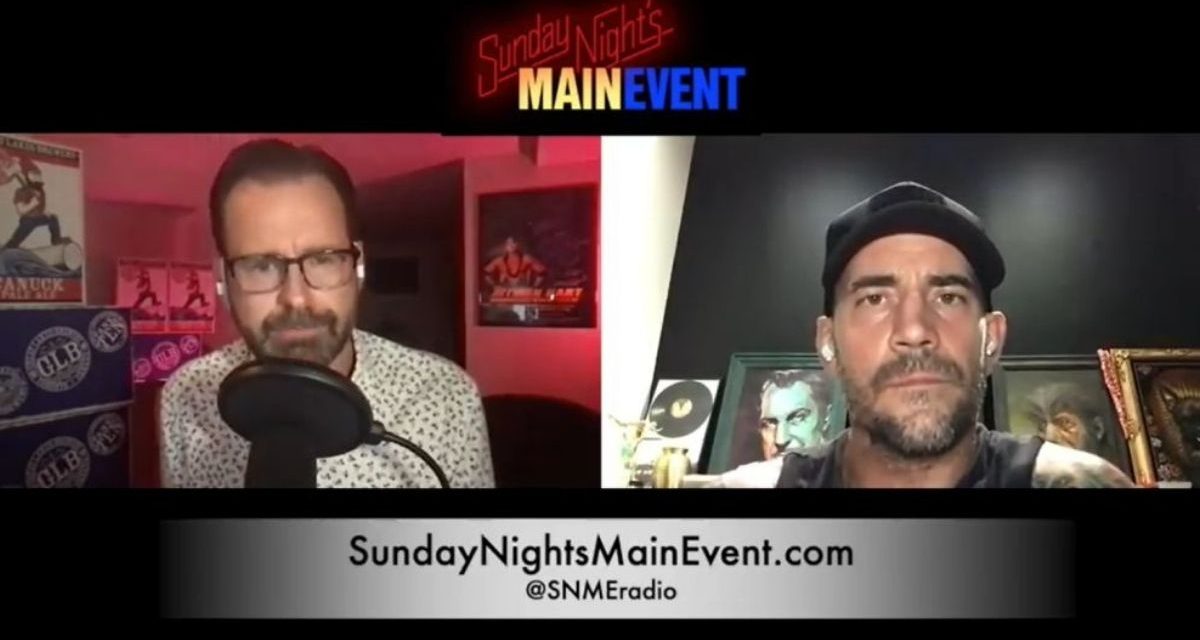 Jason Agnew of Sunday Night’s Main Event had the opportunity to talk with one of pro wrestling’s hottest free agents — and actor — in CM Punk.

In a 12-minute interview, Punk and Agnew mainly talk about Heels, the Starz show starring Stephen Amell about a fictional pro wrestling promotion, launching on Sunday, August 15th. Punk noted that he had originally been in talks for a major starring role in it, but then the show was shelved; instead, he is playing a secondary character, Ricky Rabies, a veteran performer, who is past his prime and is getting by on gimmicks.

But it’s the tease about CM Punk (Phil Brooks) appearing on AEW television, perhaps on the second episode of Rampage on Friday, September 20th, that is notable.

“I’m sure you knew this was going to come up,” began Agnew. “There’s been a few hints on a program called AEW Dynamite about best in the world. There was a Cookie Monster shirt that was worn by Kenny Omega little while back. And you know, we had a AEW book the United Center on August the 20th. I’m just curious if you might be visiting the United Center that night?”

“When was that? Let me look at my calendar. What did you say it was? The 20th? I think I actually might be doing a screening. This isn’t confirmed yet, so I probably shouldn’t blast this out everywhere, but we’re talking about doing a screening of Episode Three of Heels at an AMC in Chicago, and that’s one of the dates that has been proposed. So hope to see everybody there.”

Agnew reminded Punk that it was Darby Allin on AEW Dynamite who made reference to “The Best in the World,” which was CM Punk’s catchphrase. Punk is obviously a fan of Allin.

“I think Darby Allin is great. I think everybody in the wrestling world needs to never do a dive ever again, because you can’t do it better than Darby,” said Punk. “You know, when I approached my in-ring stuff, you know, I could do a moonsault — it sucks, and why would I do one because everybody on the roster could do a better one than me? So it’s just like, why bother? If you watch Darby Allin wrestle and you watch him do one of those dives, he actually looks like he’s trying to murder somebody. So it’s doesn’t get any better than that. Stop doing dives, everybody.”

Punk confirmed that he had talks with Tony Khan of AEW before the promotion was launched. He acknowledged things had come full circle, while plugging the TV show.

The entire interview, including a lot more about Heels, is available here: