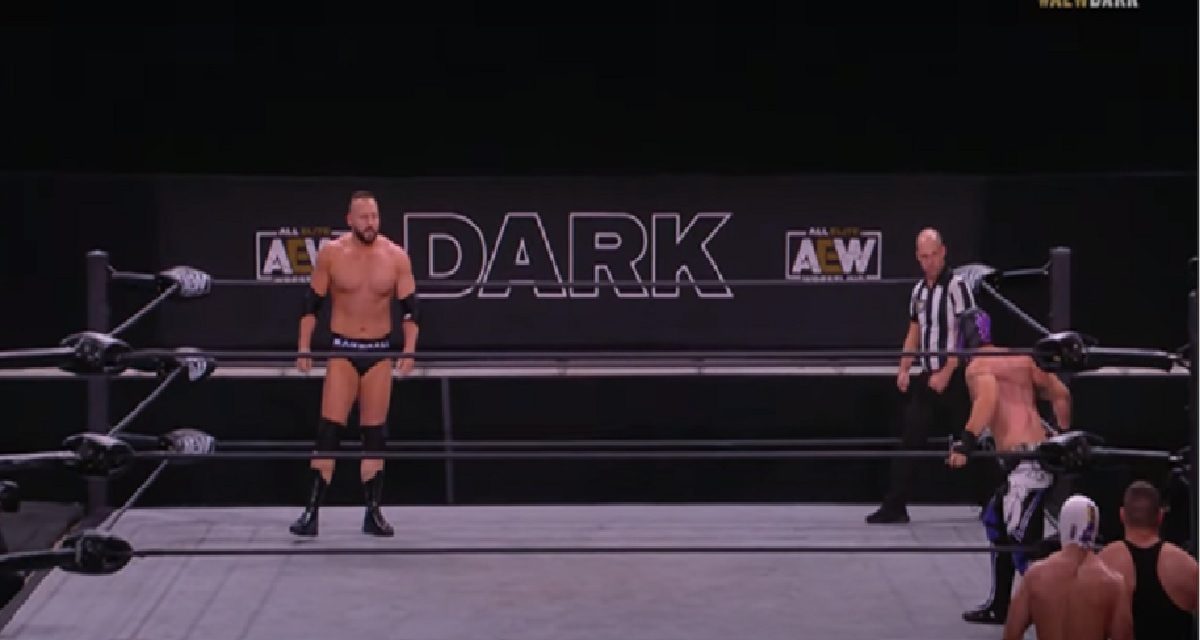 Sup peoples…..welcome to another AEW Dark Elevation and Dark recap for the week of 08/09/21

I really liked Dark Elevation this week….and not because it was only 38 minutes (although that did help). Eddie on commentary with Schiavone was a nice change up from Paul Wight and we got to see some storyline with Joey Janela and Sonny Kiss.

Dark was close to a two hour show and while it was also a good show, admittedly for me, two hours is a long time and I start losing steam after about an hour and a half which I will contend is the sweet spot for these shows.

Matchwise, there were a number of good matches. My top recommendations are the main event from Dark Elevation of the Lucha Bros vs the Sydals which was easily the match of the night and maybe even the best match of both shows. From Dark, it’s a toss up between Bear Country vs Chaos Project (which was surprisingly competitive and very entertaining), QT Marshall vs Alan ‘5’ Angels and The Lucha Bros vs The Wingmen. You can’t go wrong with any of those matches but if I had to choose, I might lean very slightly towards QT vs Angels as it was a good competitive back and forth match.

2. Red Velvet used the Final Slice to beat Renee Michelle. Michelle attacked Red Velvet to gain the early advantage at the beginning of the match.

3. Captain Shawn Dean got the win over Pretty Peter Avalon (w/ the Wingmen) using a Backstabber in a short match. Dean got a nice crowd reaction after getting the win.

4. Hikaru Shida used a Falcon Arrow to beat Tesha Price. Price handed out flowers to Shida and the ref before the match but started shrieking and wrestled very aggressively when the match started.

5. Tony backstage interviews 2.0 (Jeff Parker and Matt Lee) and Danny Garcia. Garcia asks for a match with Darby Allin on Dynamite and a match against Fuego Del Sol on Dark. Not a bad promo at all.

7. Brain Cage pinned RSP after hitting an F5 to get the pin.

9. Jungle Boy and Luchasaurus (w/ Marko Stunt) beat Cyrus and Carlie Bravo when Bravo tapped to the Snare Trap. This was almost as quick as the Jade squash match.

10. In the main event, Penta El Zero Miedo and Rey Fenix beat Matt and Mike Sydal when the Luchas hit a double team Fear Factor on Matt Sydal. Not surprisingly, this was a very good match with both teams getting some great offence in. And once again, I have to reiterate….Rey Fenix is superhuman!!!

1. Thunder Rosa submitted Zeda Zhang with the Peruvian Necktie. Zhang was making her AEW debut. Thunder Rosa was really impressive and I love watching her wrestle.

2. Red Velvet beat Skyler Moore with the Final Slice to get the pin. Strong win for Velvet as she heads towards her title match on Rampage this Friday.

3. Matt Lee and Jeff Parker got the win over Liam Gray and Adrian Alanis when Lee and Parker hit a double team Hotshot on Alanis to get the pin. This was 2.0’s debut on Dark and they looked good.

4. Bear Bronson and Bear Boulder beat Chaos Project when Bear Bronson pinned Luther after a double team splash move in a pretty fun match. At one point, Bear Boulder did a double powerslam on Luther and Serpentico which was insane. It was good to see Bear Country back together and I hope we get to see these two on Dynamite in the main tag team picture.

5. Darby Allin pinned Invictus Kash using the Last Supper. Both guys did some good wrestling at the beginning of the match and Kash got some good offence during the match. Kash is the first Iranian competitor in AEW and both Kash and Allin both trained with Buddy Wayne.

6. QT Marshall (w/ Nick Comoroto and Aaron Solo) pinned Alan ‘5’ Angels (w/ the Dark Order) in a good back and forth match. Right before the finish, QT took Angels’ mask off. When Angels recovered and put it back on, QT hit the Diamond Cutter for the win. This was a good back and forth match and one thing I’ve noticed about QT especially when he’s wrestling the younger guys is that he tries to give them a good match where they also get good offence.

7. Hikuleo beat Thad Brown with a modified Attitude Adjustment type slam (I don’t know what else to call it). Hikuleo is an impressive looking dude.

9. Daniel Garcia got a verbal submission out of Fuego Del Sol using a hold that wrapped up Fuego’s arms and legs. Garcia has this intense heel gimmick that he’s trying to use. Curious to see how this evolves.

11. Shawn Spears and Wardlow beat Ripper Zybszko and Seth Gargis when Spears hit the C4 on Zybszko to get the pin. As much as I try, I cannot get into Shawn Spear’s character. It feels too forced. Wardlow however, continues to be booked like a monster.

12. Angelico and Jack Evans got the win over Jay Freddie and Marcus Kross when Angelico got the Navarro Deathroll on Freddie for the submission. I still contend that TH2 are grossly underutilized in the tag division and they have one of the coolest ring entrances.

14. Tay Conti hit the DD-Tay on Robyn Renegade for the win. Conti continues to impress every week.

15. Marq Quen and Isiah Kassidy (w/ Angelico, Jack Evans and Jora Johl) beat Chuck Taylor and Wheeler Yuta when Quen pinned Yuta with his feet on the ropes. Prior to the pin, Angelico caused a distraction allowing Jack Evans to hit a kick on Yuta. After the match, Quen hit a low blow on Yuta but Orange Cassiday and Kris Statlander came out and chased away HFO.

16. Colt Cabana, Evil Uno and Stu Gryason beat David Ramos, Jake Manning and Joey Sweets when Cabana hit the Chicago Skyline and splash to get the pin on Joey Sweets. Evil Uno and Stu Grayson have great tag team moves and I think are one of the more underrated teams (along with TH2) and should be in title contention for the tag belts.

17. Alex Reynolds, Johnny Silver and Preston ‘10’ Vance vs Arjun Singh, Dean Alexander and T.I.M when 10 submitted Dean Alexander with a Full Nelson. Reynolds and Silver are another team that have great tag moves and could be easily inserted into a title match even if just a TV one.