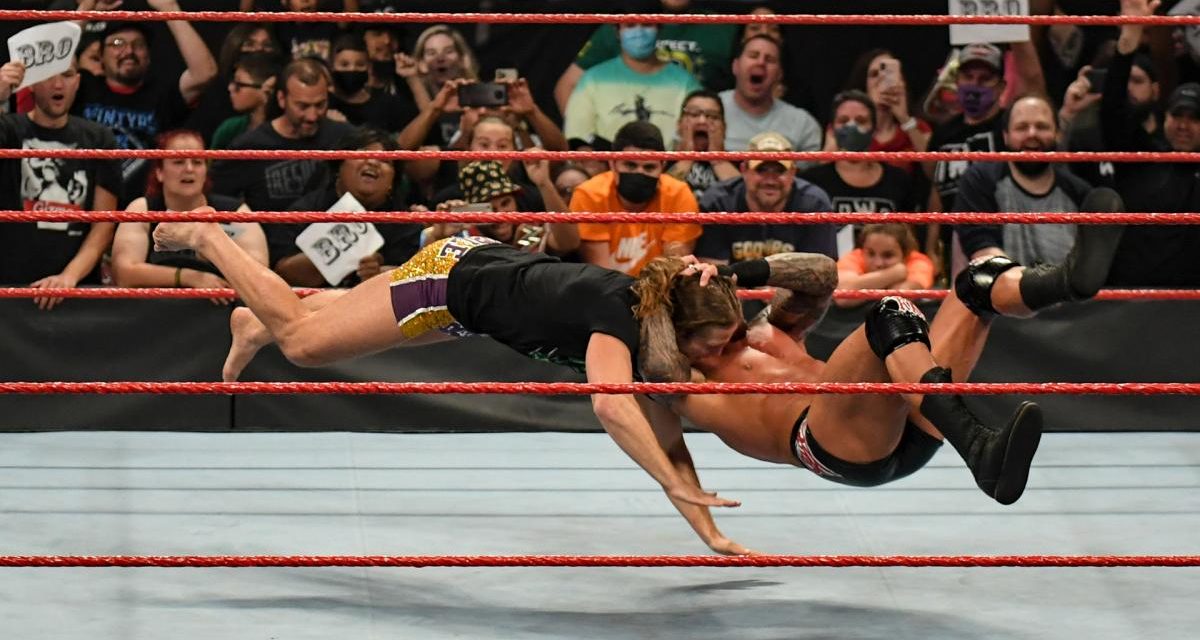 With less than two weeks until SummerSlam, Monday Night RAW makes a stop in Orlando, Florida at a packed Amway Arena. (Checks the news.) Oh no, no good can come from this. Maybe WWE should have toured the Northeast for a bit. Anyway, after starting strong with the first show in front of live crowds, RAW has turned back into its terrible self. Let’s get on with it.

Randy Orton makes his return, kicking off the show. He is quickly joined by his tag team partner, Riddle. Orton isn’t as enthused. Riddle missed his buddy and wants to know where he went. Is the crowd chanting R-K-O or R-K-Bro? Orton asks Riddle what makes him think that he would want to team up with him again. Orton says he works better by himself, and Riddle is doing better on his own. Riddle is completely dejected. Orton acknowledges that they were a good team.

The tag team champion, AJ Styles and Omos, crash the party. Styles heckles the love fest from Riddle. Orton tells Styles to shut up, so Styles challenges him tonight. Orton vows to beat Styles with an RKO. Styles sees it coming and ducks out of the ring. Orton sets his sights on Omos, who blocks the RKO. Riddle tries his hand, but Omos catches him. Riddle gets choke slammed in the middle of the ring. Riddle rolls to the floor, looking to Orton for help. The Viper just walks away.

Baron Corbin as arrived on RAW to challenge Drew McIntyre. He just needs the money, Corbin has lost everything. His crown, money, car and family. Jinder Mahal has given him a chance to turn things around by beating McIntyre.

McIntyre calls out Mahal for being scared and then asks the crowd if he should feel sympathy for him. McIntyre knows Corbin is a bad person and the crowd wants to see him win.

It should come as no surprise that Mahal and his goons are watching on a monitor backstage. Corbin gets in some desperation offense, but McIntyre dominates the match. Drew looks to finish Corbin off, but Baron starts to cry. He begs Drew for any kind of help. McIntyre calls him pathetic and asks what he needs to get back on his feet. Corbin asks for $100,000. What about $200,000 or $300,000. That starts the countdown. McIntyre delivers a Claymore kick and covers Baron to get the pin.

After the match, Mahal, Veer and Janky start to walk down the ramp. They stop quickly when McIntyre starts to brandish the sword.

Riddle rolls up on Orton and offers to he his friend, even if he doesn’t want to be partners. Riddle wants to be in Randy’s corner tonight, since AJ will have Omos. Orton tells Riddle that he is serious and don’t call him Bro.

Karrion Kross calls out Jeff Hardy for ruining his RAW debut by cheating. Hardy did have his feet on the ropes for leverage, so Kross isn’t wrong.

Hardy ducks the opening shot from Kross, but then catches a boot to the head. Hardy does hold his own, hitting splash from the second rope. Kross kicks out. A jaw breaker rocks Kross. Hardy rolls him up and grabs the tights, but still can’t get the pin. Karrion catches Hardy trying to climb the turn buckle. He delivers the Saito suplex and locks in the Kross Jacket. Hardy taps out.

After match, Kross delivers another suplex and locks in the Kross Jacket again.

Riddle doesn’t want to say if R-K-Bro is over.

Alexa places Lilly on the top turnbuckle before the match starts. Eva Marie wants to sit on the turnbuckle too. The ref makes her go to the floor. Doudrop sends Alexa to the mat, but she does her weird crawl toward her. Alexa leaps to her feet and is able to lock in a sleeper. Bliss goes to the floor,  stalking Eva. Doudrop takes advantage, hitting her from behind and tossing her into the barricade. Doudrop slams Alexa and starts to yell at Lilly. Doudrop can’t stop staring at Lilly, allowing Alexa to roll her up from behind and get the pin.

After the match, Eva slaps Doudrop for losing.

Sheamus is not happy with Miz and Morrison after they cost him a match last week. He tells Morrison that he better get the job done tonight.

Starting a few weeks ago these are no longer non-title match. WWE has officially renamed it a championship contender match. Ricochet gets in some offense, launching himself over the announce table to take out Sheamus before the commercial break. After the break, Ricochet with a hurricanrana and follows with an moonsault off the ropes. Sheamus kicks out of the pin. Ricochet tries to pick Sheamus up, but the Celtic warrior elbows his way out. Ricochet looks for a head butt, but catches the mask of the Sheamus, who hits Brogue kick. Sheamus covers and gets the win.

After the match, Sheamus isn’t happy that Damien Priest cut into his celebration. Priest hits the ring and the two exchange words. Sheamus backs off, but then tries a sneak attack. Priest sees him and sends Sheamus over the top rope.

Miz tries his best to help Morrison win, but the drop stick can’t stop Priest. Damien hits the Reckoning and picks up the win.

After the match, Priest confronts Miz, who slaps him in the chest. Miz is on his feet and out of the wheelchair. He takes off, sprinting up the ram. Priest grabs a microphone and calls out Sheamus. He wants and United States title match. As Sheamus responds, Morrison tries to attack Priest from behind, but Damien kicks him away. Priest says he will be ready for SummerSlam.

Mansoor apologizes to Mustafa Ali for messing things up last week. Ali tells him he just needs to learn from his mistakes and get better. Tonight, Ali is going to show him how it is done.

T-Bar with a back body drop, but Ali answers with a drop kick. T-Bar catches Ali coming over the top rope and swings him into the barricade. T-Bar goes for a pin, but Mansoor points out the Ali has a foot on the ropes. Mace takes out Mansoor. Ali goes up top, but T-Bar meets him there. He hits Feast Your Eyes and covers Ali to get the win.

Reggie could get used to these photo shoots. Akira Tozawa ambushes the 24/7 champ, but R-Truth breaks up the pin. Reggie jumps and flips his way to safety.

Kevin Patrick interviews AJ Styles and asks him about Randy Orton’s return. Styles just doesn’t care, but he does care that Orton thinks he can walk back in and get back to the top of the mountain. Orton made a colossal mistake.

The All Mighty WWE Champion Bobby Lashley makes his way to the ring with MVP, who wants to set the record straight. MVP never threatened Goldberg’s son and that Goldberg’s spear on him was a cheap shot. He told Gage that if he loves his father he needs to talk him out of the match. Lashley will end Goldberg’s career. MVP is begging Gage to persuade his father not to show up to SummerSlam. Lashley will end his career.

Rhea Ripley was impressed by Nikki A.S.H.’s performance in her No Holds Barred match week. Ripley knows how to hold onto that title, you need both the light and dark and she doesn’t see any darkness in Nikki. She will walk away champ at SummerSlam.

After the break, Nikki get her interview. She tells Sarah Schreiber that she is prepared for things not to go her way, but she believes in herself. Tonight, her dream could turn into a nightmare, but she has her spirit and drive. She will do what it takes to retain her title.

Nikki is still showing signs from last week’s match with tape around her ribs and elbow. Nikki with a roll up, but Ripley kicks out. Rhea goes after the ribs, but Nikki counters the Riptide into a pin. Ripley kicks out. Nikki goes up top and fights Rhea off. Charlotte Flair comes out of nowhere, knocking her to the mat. The ref calls for the bell.

Flair dishes out Natural Selection to both Nikki and Rhea. She picks up the title belt and poses with it before dropping over Nikki.

WWE used to stand for Walk with Elias, but Elias says he is dead after tossing his guitar into a fire.

Sarah Schreiber wants to know why Charlotte attacked Rhea and Nikki. She just created an opportunity and both women should have anticipated her attack. Flair is upset that her loss last week seemed to erase her career in the minds of the fans.

Elsewhere backstage, Randy Orton tells Kevin Patrick that he works better alone. He doesn’t need the partners or friendship. He will do it all be himself.

Orton and Styles trade blows until Orton drops AJ on the ropes. The Viper stares down Omos and goes back work on Styles. A forearm sends Orton over the top rope heading into the commercial break.  Styles connects with a sliding forearm after the break and locks in a chin lock. Orton gets to his feet and breaks the hold with a head butt. The two trade shots again. AJ shuts that own with a kick, but Orton responds with forearm shots and then a power slam. Orton with a back breaker, but can’t get the pin. Orton takes Styles up top, but AJ escapes and tries to lock in the Calf Crusher. Orton tries to block it, but is able to get the ropes to break the hold. Styles goes up and over the top rope, but lands on the apron to hit a forearm shot. Styles looks for the Phenomenal Forearm, but Orton evade and knocks Styles to the mat. Orton hits the draping DDT and looks to end things. Omos pulls AJ into the corner. Orton yells at him. Styles gets to his feet and kicks Orton in the head.

Riddle runs out from nowhere and slams Omos into the ring post. Riddle tries to lock in the Bro-mission, but Omos crushes him against the ring post. Styles goes for the Phenomenal Forearm, but Orton has it scouted and counters with a RKO out of mid-air. Randy covers Styles to get the pin.

After the match, Riddle wants to celebrate. He wants to give Orton a hug. Orton yells at him. Riddle wants Randy to listen to the crowd chanting R-K-Bro. Orton hugs Riddle and lets him raise his arm in victory. The feel good moment doesn’t last. Orton drops Riddle with an RKO. See you next week.

Randy Orton returns and RAW becomes somewhat watchable, coincidence? I think not. Granted anything with out Orton or Riddle wasn’t that great. The sooner we are done with Goldberg the better. I cant help to think how many wrestler were released to justify Eva Marie’s contract? If you missed RAW, watch the opening segment and the main event and you will be fine.