ROH: La Facion lost the battle, but may win the War 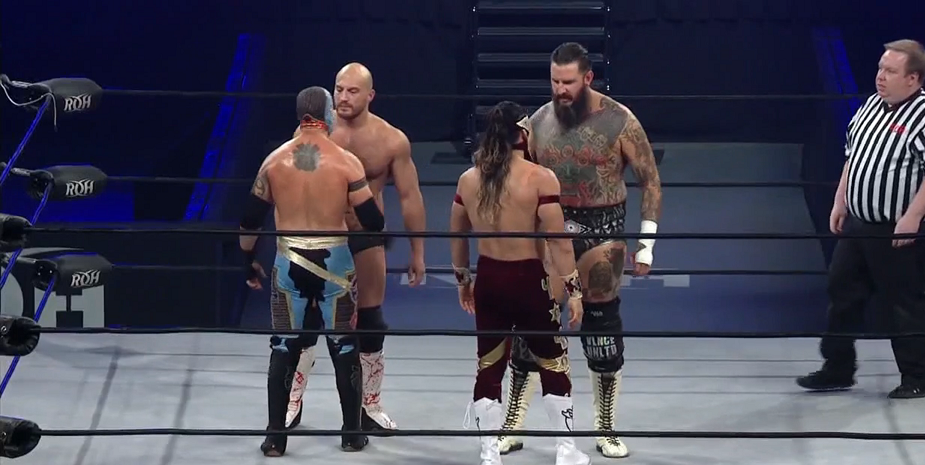 Greetings and salutations everyone and welcome to my weekly ROH TV report. This episode of ROH TV featured more of the Women’s Championship Tournament and we are back to normal programming as we finally see the new ROH champion Bandido in action. I have to say, I am super excited to see Quinn McKay in action as she is without a shadow of doubt a superstar in the making. Without further ado let’s get to it.

Ian Riccaboni is our host this week as Quinn McKay is in action. We will be continuing the Women’s Championship Tournament with two matches this week. First it will be Quinn McKay versus Mandy Leon. As Riccaboni is recapping the story between The Allure and McKay, he mentions that Allysin Kay defeated Willow in the Women’s Championship Tournament as they hold one weekly match on Wednesdays on their YouTube page. For those interested, Kay beat her opponent Willow with a Kimora lock. Riccaboni then announced that also on the show would be Trish Adora versus Marty Belle and then the main event will be a tag team match as Bandito and Ray Horus face off against Violence Unlimited members Brody King and Chris Dickinson.

Just like last week, we got a video package introducing both women. McKay said she’s been given more opportunities to prove her self so she feels like she needs to earn her spot in the tournament. McKay mentions that per Maria Kanellis’ orders,  Mandy Leon and her partner Angelina Love cannot accompany each other down the rink together. Mandy Leon said that she is upset that McKay has received another opportunity in the Women’s Championship Tournament. Leon ultimately blames Maria Kanellis though. Leon thinks it’s disrespectful that she as a founding member of the ROH Women’s division is forced to face McKay over and over and over again. Leon ended the video package by saying that this time there’s a more on the line and McKay is just a stepping stone to her ultimate goal, the ROH Women’s Championship.

With both women in the ring we got formal introductions to the announce team for this match of Ian Riccaboni, Lenny Leonard and Caprice Coleman. Leon is still posing in the ring to an empty arena while McKay is set for action as the referee tried to keep her to her corner. McKay starts the match right away before the bell even rings with a spear call onto Leon. McKay was looking for her half Nelson sleeper, the Tangerine Dream. Unfortunately, McKay wasn’t able to hook it on properly as Leon escapes the hold attempt. As Leon sneaked away to the outside she was able to drag McKay out of the ring as well. Leon continues her assault on McKay by pulling her hair and dragging her around the outside of the ring as the referee continues his count 20. McKay eventually regained control on the outside of the ring as she shoved Leon to the barricade. Back in the ring McKay was fighting with pure aggression and may have been a little too upset which allowed Leon to take advantage of the match. Leon did a snap Suplex but only got a one count as McKay flipped over and get a two count of her own.

Back from break Leon had control over McKay but was trash talking her around the ring asking McKay if she think she’s actually going to be champion. Leon with a the Snapmare, ran to the ropes and delivered a kick to the chest of McKay. Leon then ran to the other rope and performed a running cutter (Natural Selection) to McKay. Leon went for the pin but was only able to get a two count. Leon slowly climbed the ropes but this gave McKay enough time to recover from the previous combo of moves. McKay gets up runs to the ropes and tried to execute a super Plex but Leon eventually did a sunset flip and once again gained control of McKay. Leon with a running Unprettier but only managed get another two count.

McKay was going for a Tangerine Dream but Leon ended up doing a backpack stunner but once again, was only able to get a close two count. Leon, physically frustrated was slow to set McKay up for the Astral Projection but McKay rolls through, crossed Leon’s legs and gets the three count with a bow tie pin for the win. McKay advances to the quarter finals of the Women’s Championship tournament and will face Rok-C.

After the match Leon was incredibly frustrated as the referee ensured Leon couldn’t attack the winner. McKay was still celebrating as she jumped the railing and hugged the entire announce team as th official tournament bracket updated itself.

After the break we get a video package highlighting the two women in the next match first up was “The Dominican Dynamite” Marti Belle. She covered her resume pre wrestling which included Baseball. Trish Adora previously played Rugby and thought the army would be a good fit for her. She also said she was looking to submit Marti Belle. The video package also covered that they previously fought before with Belle getting the win.

After both entrances, it was time for the action to get started in the ring. Chelsea Greene has joined Ian Riccaboni and Lenny Leonard for commentary during the match.

Back from the break Belle had control of the match and was trying to whip Adora to the corner of the ring but Adora grabbed the ropes to keep herself in the corner. Belle frustrated attacks Adora in the corner and now has the clear advantage in this match.

After Belle got cocky and took her eyes off Adora, Adora landed some clotheslines to Belle. Adora was now using her Judo background as she did some hip take downs to Belle as she tried to find a pinning combination to put Belle away. Belle survived all of Adora’s pin attempts and while looking for Hell’s Bell’s, Adora dropped to her knees, turned Belle around and got loose from the move. Now Adora locked the arms of Belle from the floor and locked in a Cattle Mutilation. Belle submitted as soon as Adora locked the fingers.

After the match, the women’s Championship Tournament brackets updated itself to show Trish Adora will face Alison Kay in the quarterfinals. Belle got up and hugged the winner Adora as the code of honor was adhered to.

Back from the break we get highlights from “Best in the World” 2021 where Bandito beat Rush for the ROH Championship. We also got a “Glory by Honor” graphic that showed that Bandito will face Flip Gordan for the ROH World Championship on Night Two, August 21, 2021. Silas Young has joined Ian and Caprice on the commentary desk for the main event.

Violence Unlimited (Brodi Lee and Chris Dickinson) is out first. During a pre match promo, Lee congratulated Bandido for his Championship win but also congratulates Chris Dickinson on winning the Tag Team Championship. They both put over their credentials in New Japan as a team as they also put Rush and Ray Horus on notice. Ray Horus and Rush each had their own entrances. During their pre match promo they said they hope Violence Unlimited are ready as the sun of Tijuana will shine on them.

The code of honor was adhered to as the match started. Violence Unlimited took advantage early on in the match. Dickinson and King controlled the first portion of the match by using their brute strength and performing quick tags.

Back from the break, Violence Unlimited was still in control but Horus was able to mount offense on both men and was able to get the hot tag to Bandido. Bandido now stayed on top of both men using his Lucha style. Bandido was even able to Gorilla Press Dickinson to the outside on top of Lee. Bandido did a Fosbury Flop on both men as Horus did a twisting Moonsault on all three men onto the outside of the ring.

Horus threw Dickinson back in the ring and was only able to get a two count. The action continued to be fast and furious for Horus as he performed a running shooting star press for yet another close two pin. King broke up the cover and this gave Dickinson sometime to recover. Recover Dickinson did as he was able to do a running Spicolli Driver on Horus while King landed a running Senton on him. Horus rolled to the outside of the ring. Now Bandido was alone while King and Dickinson had control of the champion. King was able to put Bandido in a Boston Crab while Dickinson jumped on the back of Bandido’s head. Horus made the save as he landed a few kicks to King but Dickinson dropped Horus and put on an STF on him. Bandido was able to make his way to the bottom rope to force the break of the Boston Crab.

Bandido and Dickinson were alone in the ring as Bandido’s 21-Plex was blocked. Dickinson ran to the ropes but was kicked by Horus in the back as a distraction. Now Bandido performed the 21-Plex as Dickson was distracted by Horus. Bandido went for the pin and scored the win for his team.

This week’s ROH TV was a fun and easy watch. The Mandy Leon vs Quinn McKay match told a fantastic story and was entertaining. While I am super excited for McKay picking up the win I am intrigued to see what will happen as her opponent for the Quarterfinals is “The Prodigy” Rok-C, who left quite the positive impression on me last week. After several weeks off I was also happy to see the new champion Bandido in action. The brawl at the end of the show was exactly what we needed to see as we build towards the next major show “Glory by Honor” in two weeks. However, while I am happy La Faccion Ingobernable is getting TV time I would like to see the next contender for Bandido’s title, Flip Gordan have a good run and be a legitimate contender to the title. We will stay tuned.   Until next time, Stay Safe!