Guest column: A belt for the Boogie Woogie Man’s birthday 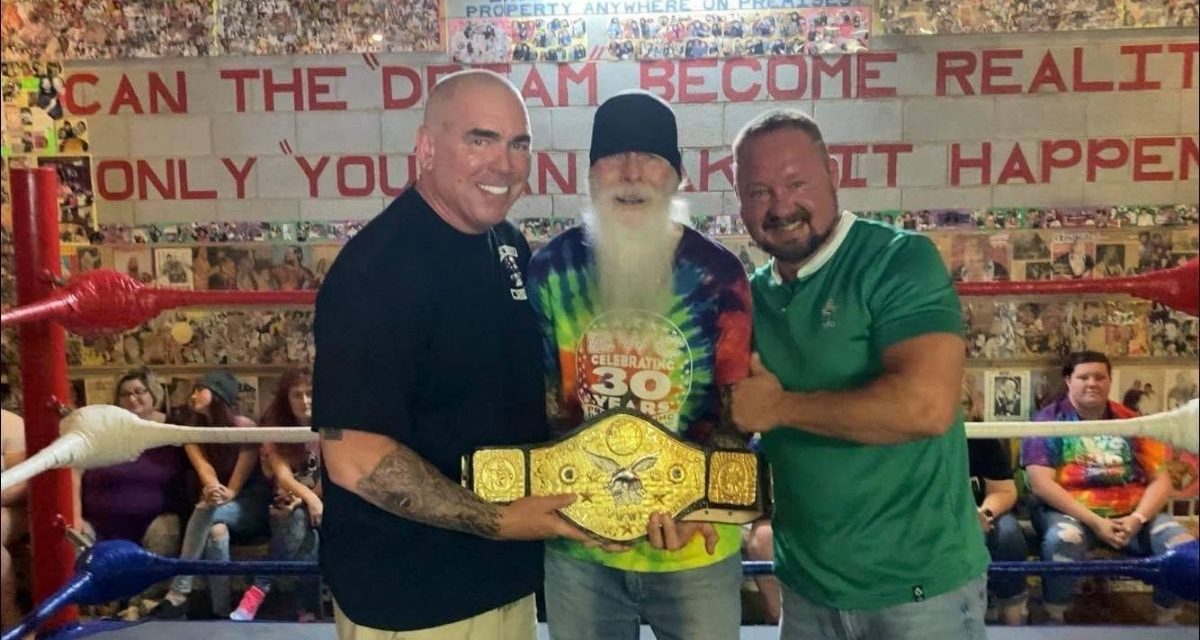 Back on August 8, 2018, I made my first of many visits to Boogie’s Wrestling Camp Hall of Fame and Museum (BWC) in Shawsville, Virginia. The reason I travelled from Rhode Island to this pro wrestling landmark in the first place was to meet and hopefully spend time with my childhood hero former WWWF World Tag Team Champion and WWE Hall of Famer “Handsome” Jimmy Valiant.

At the time, my life was spiraling out of control and my inner voice was telling me to look up the man known as Boogie. He was a stranger to me. He had no idea I was struggling in life. When we met, he immediately sat down with me and opened his heart to a near-broken man. He listened to my story. I mean he really listened and when he was sure I was finished he offered his theory on how to achieve happiness. That day opened my heart and led me down a new path filled with a renewed sense of adventure and helped me start to feel inner peace for the first time in my life.

I decided that day to return to Boogie’s Wrestling Camp every year on Jimmy’s birthday and the place has become a second home to me. This Sunday, August 8, 2021, was no exception, as Valiant — born Jim Fanning — turned 79 years young.

Some background on me, though. I was a wrestler back in the 1990s known as Knuckles Nelson. My life was filled with drug and alcohol abuse as well as the physical abuse of pro wrestling. I was lucky to have lived through it and come out on the other side sober and in one piece. I always considered Jimmy Valiant my idol, but our paths never crossed in the many locker rooms I was in.

Every time I would visit Boogie’s Wrestling Camp, I toured the grounds of this historic Hall of Fame and Museum. If you are a wrestler or a fan, I suggest you pay this out-of-the-way campus a visit. There is so much wrestling history to see and feel. From my first visit, I immediately noticed something was missing amongst all the memorabilia. There was a WWF tag team belt on display, but it wasn’t the WWWF belt Jimmy held back in 1974.

A reoccurring thought would always come to me after I would leave camp and it would stay with me until I returned the following year. I knew I had to do something about it. I began to ask around to see if I could have a custom belt made. To my surprise, it was a bit more difficult than I would have thought. There is no shortage of replica belts on the internet, but this particular strap is not available on every website. I wanted a very special one-of-a-kind belt for Boogie.

That was when fate intervened.

I reached out to legendary beltmaker Dave Millican in Tennessee. I told him what I was trying to accomplish, and he made a few generic suggestions. Then I told him I didn’t want some cheap replica because this belt was going to be a birthday gift for the one and only Jimmy Valiant. That was all Dave needed to hear. From that day forward he researched plates for the belt and even special ordered a piece of crocodile leather to complete his creation.

He made the belt in record time and shipped it to me. When I opened the box, my jaw dropped to the floor. After I picked my jaw up from the floor, I realized I had an opportunity to make wrestling history by presenting the belt to a true wrestling legend on his birthday in from of a crowd.

The best thing I did was not tell anyone about my plan. The fewer people that knew the better chance I had to surprise Boogie. I did let a few trusted friends in on it but no one in the Boogie’s family had a clue what I was up to. I would tease the fact that “you do not want to miss this one” and “better be at camp or you will miss history being made.” Everyone was intrigued. 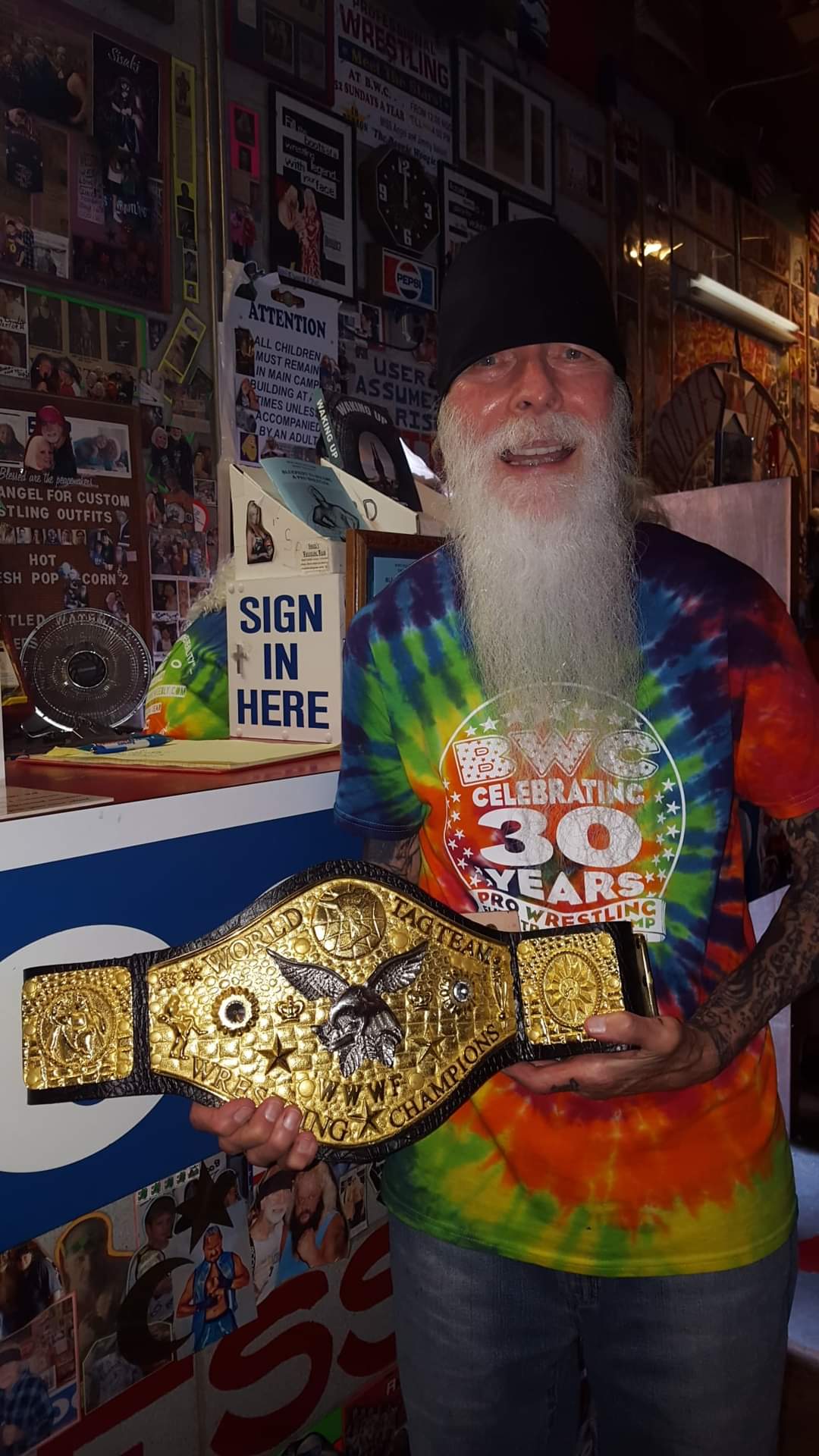 When the 2021 birthday bash arrived, I drove down with my friend, Jeff Katz, and the table was set. All my brothers and sisters from Boogie’s Wrestling Camp were in attendance to wish Jimmy Valiant — or Pops as he is known to Valiant family members — a very happy birthday. Mainstays like Capt. Joe, Magnet Man, Mike Mars, Lisa Valiant, and, of course, the first Lady of Boogie’s Wrestling Camp, his wife Angel, were all in attendance.

Boogie knew I had something planned. When the time was right, we stood face to face in the ring. I addressed the crowd in attendance mentioning that I felt the Valiants — Johnny, Jimmy and then, later Jerry — were the greatest tag team of all time and the crowd agreed. I reminded everyone that I promised a big surprise and the moment had arrived. I removed the belt from a gold box and the velvet bag it was in.

I told Boogie, “The belt had come home to its rightful owner.”

Boogie stood with his hands crossed on his chest. Upon seeing the belt, he said in a low voice, “That’s the real deal right there.” He was very moved by my gesture, and it really did feel to all in attendance as well as those who watched the video after the fact that the belt had come home to its rightful owner. 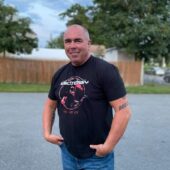 Brendan Higgins (Knuckles Nelson) is a former three-time NWA World Tag Team Champion and author of the book Waking Up – From the Wrestling Ring to the Yoga Mat — which includes details on his friendship with Jimmy Valiant.