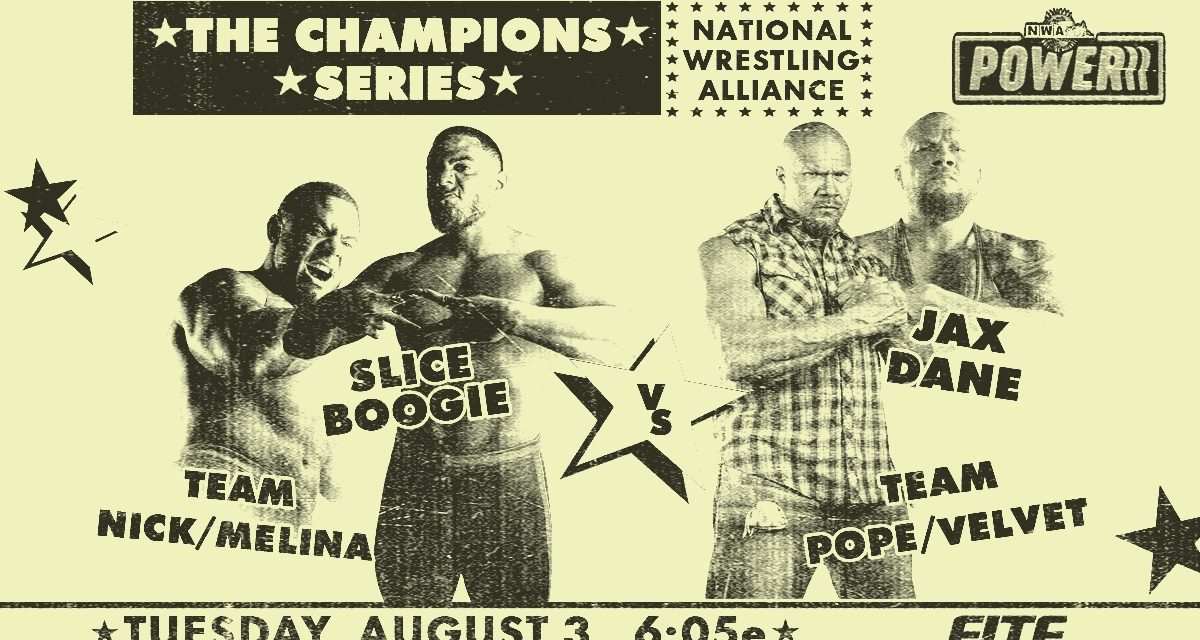 Things are heating up in at the NWA Champion Series, so you definitely stepped Into The Fire with the conclusion of Round One, where the scores can really change.

Live for the GPB Studios in Atlanta, GA.  Your commentators Joe Galli, Tim Storm, and Velvet Sky have the call, and if you missed what took place last week (shame on you for doing that), as of now it’s Team Pope/Velvet Sky in the lead for a total of ten points.  Team Aron/Taryn and Team Kamille/Austin Idol split with five points each, and Team Nick Aldis/Melina have a big fat Zero (much like the Smashing Pumpkins song).  Also we have more information on…

Now here is a new wrinkle:  a winner shall receive seven points for their team. Whoever takes the pin fall or submission will cost the opposing team three points.

So much time to cover, so few matches (Strike that, and reverse it.) and let get to the first match for Block A… 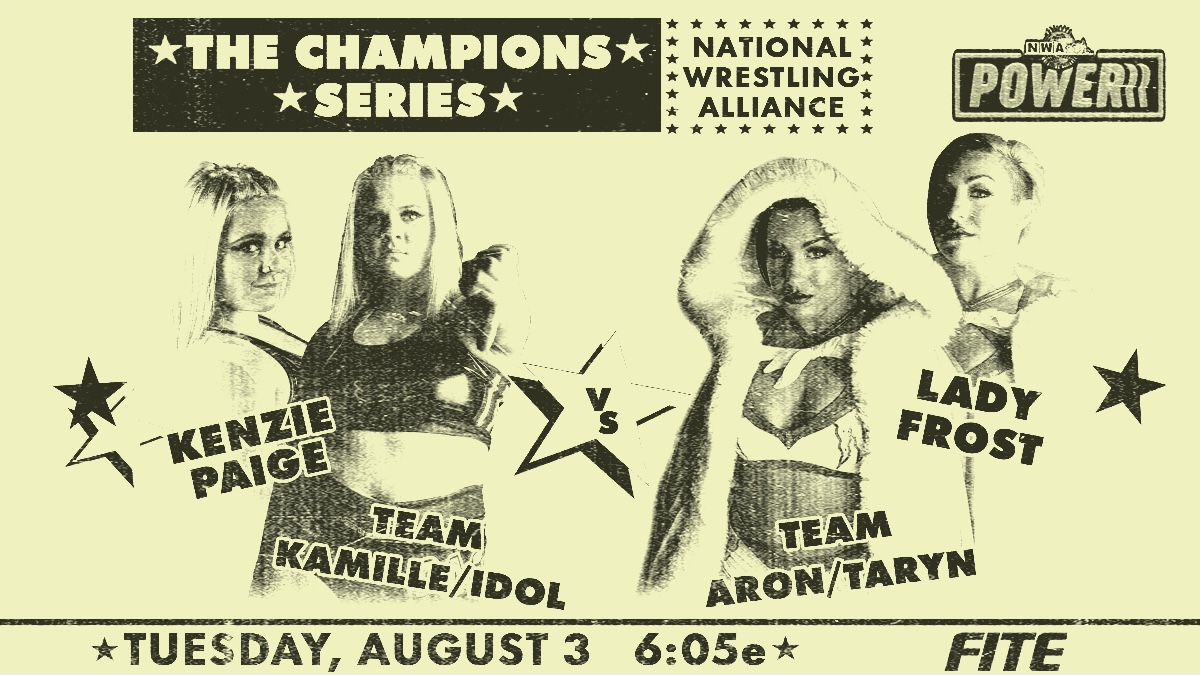 Kyle Stevens bills Lady Frost “From Somewhere Cold”, and I can think of colder people in the world, but enough about Provo, UT (Fake laugh, hiding real pain).  Anyway, Frost is firmly in control and is able to overpower poor Kenzie Paige.  At points Frost gets too cocky with Paige.   Frost is ice cold in her moves, including a fisherman’s release suplex to cover for a two count.  Paige tries to get some hope spots in, but Frost just nails a spinning roundhouse and a top rope moonsault for one, two…and Frost pulls up Paige’s head.  She’s having fun, and her teammates and the referee are telling her to get focused.  Frost says she’s gonna take her time, and then Paige schoolgirls Frost for the surprise pin and the win.

Joining at commentary is Melina.  Her teammate Crimson is facing the Mystery Man (Or Son Of The Question Mark ™), and she’s all “Who doesn’t like surprises?”  Well, I prefer my surprises simple and without incident or ex-boyfriends lurking about, but, y’know, that’s me.  But here’s the next match for Block B that will be a barnburner… 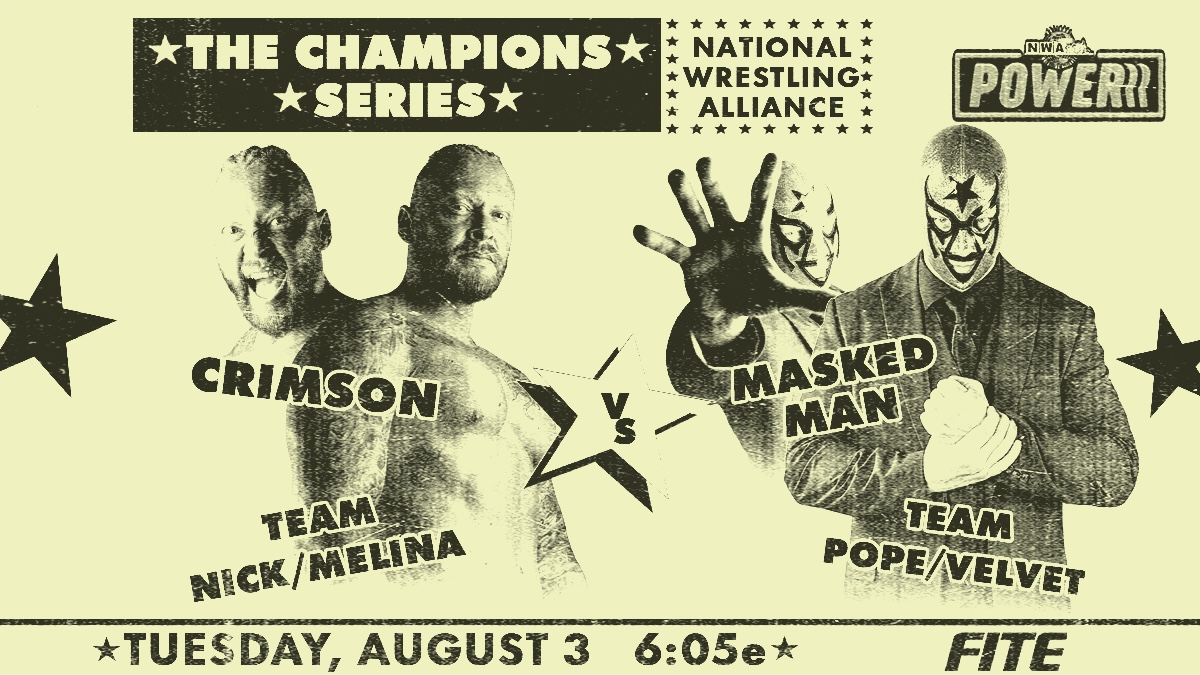 Start of the match is a very physical lockup, with neither man with the advantage.  Crimson starts to get momentum going, and sends S.O.T.Q.M. ™ to the ropes, and lays him out with clothesline, and pins for and count of…one.  Crimson goes for the mask, and when that proves futile he chops away at S.O.T.Q.M. ™, and Crimson is in the driver’s seat, but S.O.T.Q.M. ™ takes back control with an elbow to jaw.  He follows with a suplex to Crimson and S.O.T.Q.M. ™ pins for a two count.  S.O.T.Q.M. ™ keeps up the pressure on Crimson, but Crimson responds back with an exploder suplex in corner and covers for another two count.  The violence ramps up with Crimson nailing S.O.T.Q.M. ™ with the Death Valley Driver that sends the masked fella outside and Crimson goes in pursuit and slams S.O.T.Q.M. ™ to the concrete floor.  S.O.T.Q.M. ™ crawls back in the ring, and Crimson is on the hunt.  S.O.T.Q.M. ™ gets an elbow to the side of Crimson’s head, but Crimson pushes off S.O.T.Q.M. ™, and elbow drops to cover for another two count.  Incredulous, Crimson tries to finish off S.O.T.Q.M. ™, but he gets a powerbomb on Crimson and transitions smoothly to a single leg crab. Crimson tries to grab the ropes while S.O.T.Q.M. ™ cinches the hold tight.  Crimson is fading, and then the bell rings. Looks like its more points, but the ref determines…

Now, the score look to really shift as we go to… 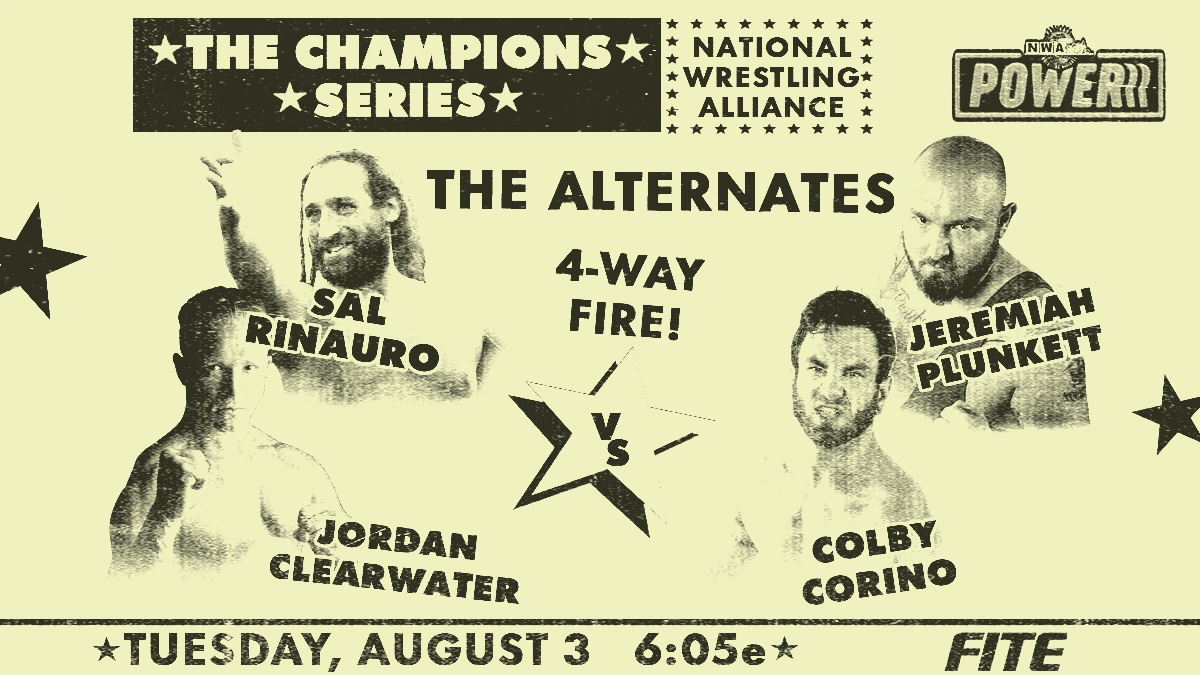 Billy Corgan is at the commentary booth, and he mentions there was a time he was around Colby’s dad, Steve Corino, in a little known promotion a long time ago in a bingo hall far, far away…in Philadelphia, PA.  Colby is basically being a whiny douche canoe at this point, as my barber would describe him, and tries to get the other competitors to help take on Your Pal Sal, but…nah.  Punches abound, and they chop Corino out of the ring.  Now it’s a three way dance, until Corino grabs Sal by the ankles out of ring, and sends him to the ring post.  As I said: douche canoe.  From there, Plunkett works over Clearwater with Colby’s help, making this an impromptu handicap match.  At one point, Plunkett and Corino try to get Clearwater in a double suplex, but it gets blocked and Clearwater reverses the move.

Of course, it does stop the beatings on Clearwater completely, but when Plunkett sends Clearwater to the corner, he fights off Corino and Plunkett, and then Sal returns back up top and does a crossbody.  Sal and Clearwater realize it’s more fun to team up, and proceed to go to town with stereo splashes and bulldogs on Plunkett and Corino.  Sal and Clearwater had fun…until Sal then strikes at Clearwater with a European uppercut, and a springboard stunner. Clearwater answers back with a spine buster, but Corino breaks up his pin and kicks Clearwater out of ring. Corino then grabs Sal in a fireman’s carry, and hits a Samoan Drop, followed by a somersault senton. Corino pins but Plunkett breaks up the count.  Now Corino has had it with Plunkett, and Plunkett is equally done with him and gets a DDT to cover Corino for the count of three.

Your Winner via Pinfall.  Jeremiah Plunkett.  It’s now Seven Points for Team Aldis/Melina, and minus three points for Team Pope/Sky

We now go to commentary, where Austin Idol joins Galli and Storm.  Idol is excited for the next match, but he’s conflicted as well, because it’s… 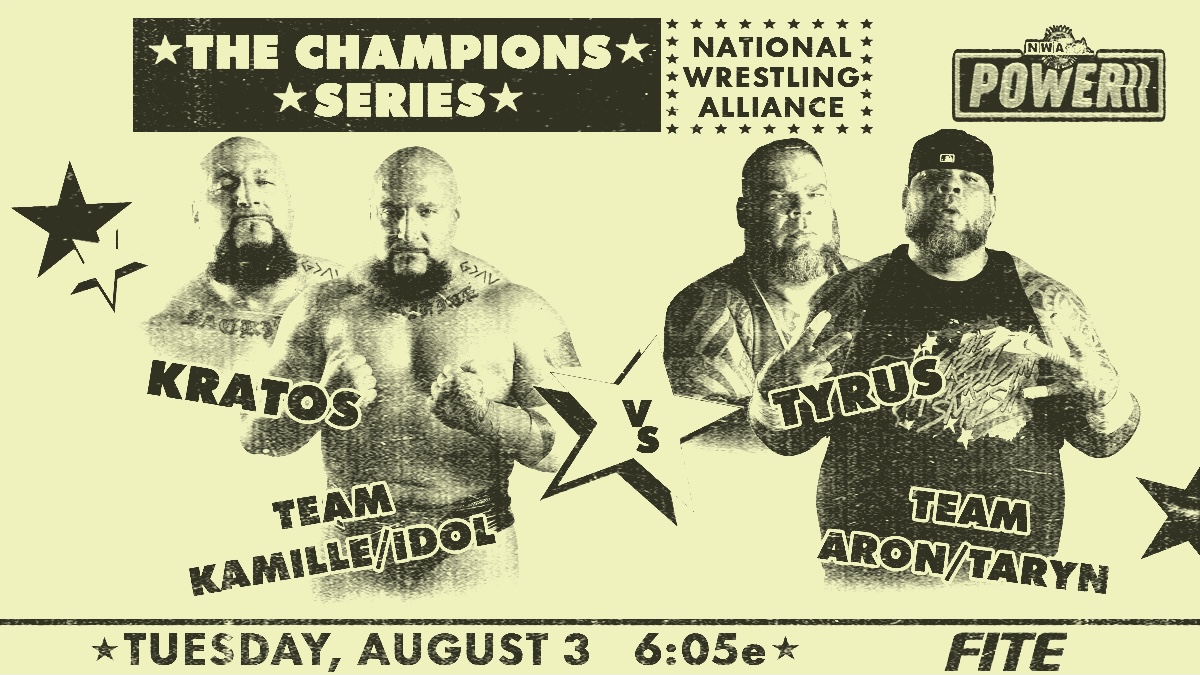 Aron Stevens comes out as well, and Kratos is staring daggers as his NWA Tag Team partner is on the outside cheering on his opponent in the Great American Smash, while Idol is also conflicted in that he wants Kratos to get the points, but not destroy his meal ticket.

Either way this match, to quote the philosopher Todd Keneley, is going to enter the land of the big uglies, and it’s just straight smash mouth wrestling.   No one is giving an inch, but Kratos pushes Tyrus to the corner turnbuckle, and Tyrus gives a receipt in an arm drag.  Kratos fires back with forearms to back/head of Tyrus, and the ref has Stevens ejected for…I couldn’t tell you why, even the commentators could find no reason.  The rest of the match feels a bit disjointed after that, as Tyrus gets the win with an elbow drop to Kratos and the bell is called.

Your Winner via Pinfall:  Tyrus; Five Points for Team Aron/Taryn

So with that, in Bracket A Teams Kamille/Idol and Aron/Taryn each have ten points, but with the rules being if there is a tie the team with the shortest match will advance.  In this case, at 12:29, Team Kamille/Idol will advance, and Team Aron/Taryn have been eliminated.

Joining Joe Galli on commentary is Da Pope, in a do or die match that has implications for Bracket B, so let finish up with the Main Event… 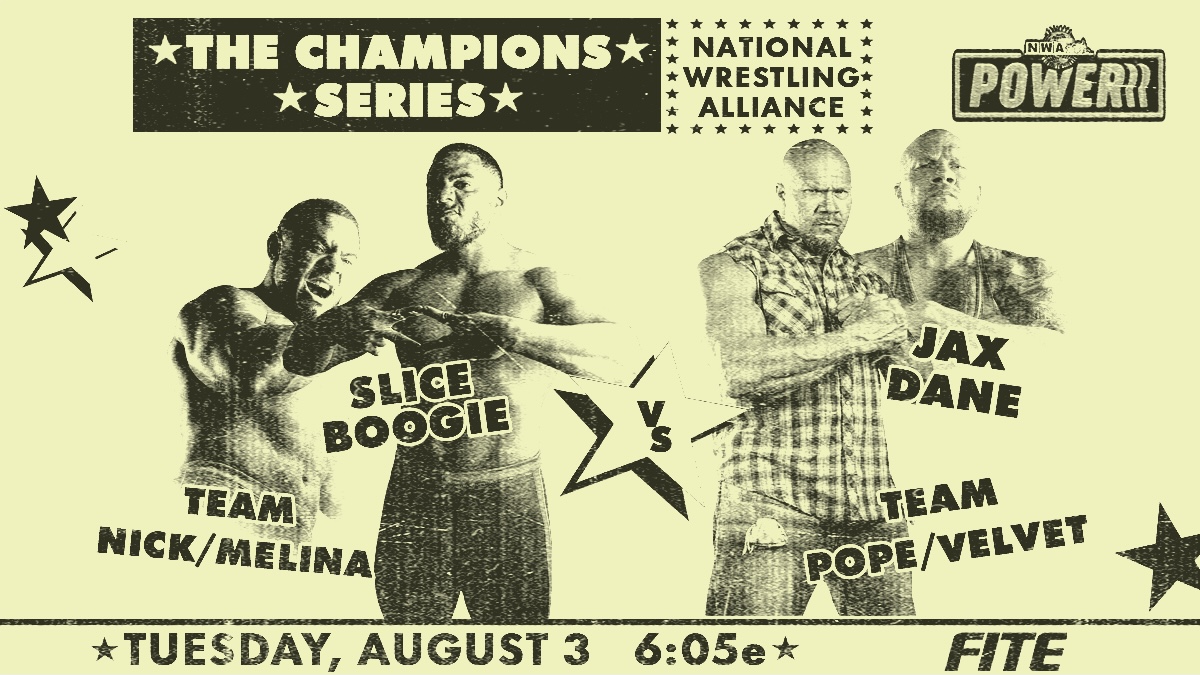 Boogie unwisely pie faces the War King and even less smartly tries to tackle the former NWA heavyweight champion to no avail, until Dane runs him down, and stomps at Boogie in the corner.  Ref gets him to back off, but Dane goes back on the attack and gets a thumb in the eye. Mafia kick by Boogie does nothing to Dane, and he delivers a belly to belly suplex that sends Boogie flying and out of the ring.  Dane goes on the hunt, but Boogie catches his neck on the top rope.  He keeps up the attack with a leg guillotine to Dane’s neck draped on the middle rope.  Back in the ring he gets Dane in a spinning neckbreaker to a cover, but gets a two count.  Boogie keep grinding down Dane, but the War King comes back and nails Boogie with another suplex.  Dane sends Boogie to the corner and goes to tackle, but Boogie dodges and Dane overshoots and hits the post.  Boogie wants to end this and goes for his finisher, but Dane powers out, and hits a clothesline that turns Boogie inside out for the one, two, and three.

So with that, Team Pope/Sky get a total of fourteen points, and advance out of Bracket B, leaving Team Aldis/Melina in the dust.  Next week will be the start of the Final Round, and we’ll have more updates next Tuesday as the show goes to credits to close the show.

Nice surprise with the alternates being the huge difference makers in the Champions Series.  Overall a solid show.  It would have been higher, but the ending of the match with Tyrus/Kratos was the one that was off near the end, and I can’t figure out what happened other than it was an off night for both men.

I am curious how the final round of next week goes, and what this means with the PPVs coming up in less than four weeks.  Until then, see ya in seven