ROH: The Women Take Over the show 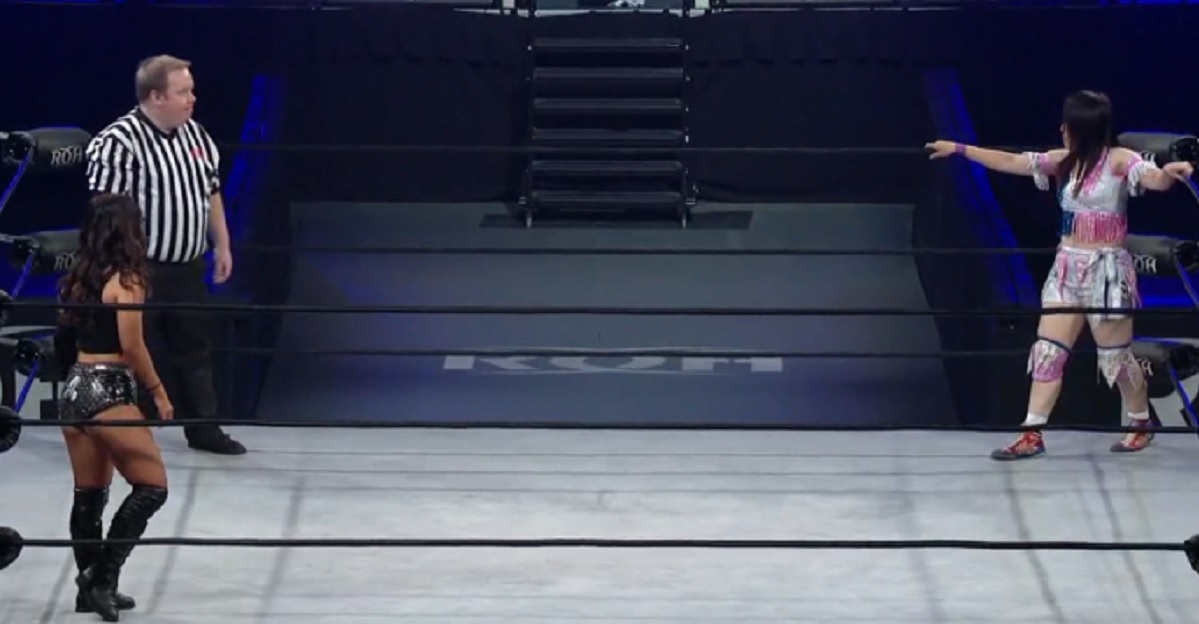 Greetings and salutations everyone and welcome to my weekly ROH TV report. This episode of ROH TV featured three first round matches of the ROH Women’s Championship Tournament. I for one was excited to have Women’s Wrestling featured on the weekly TV as I sense ROH is putting a lot of effort and resources into the newly revamped Women’s division. Without further ado let’s get to it.

The show kicked off with our regular intro. We are then taken back in time to Best in the World where Maria Kanellis introduced the bracket and competitors for the new and re-branded ROH Women’s championship tournament.

Quinn Mckay introduced us to the show and mentioned that starting this week until the first weekend of September the Women’s Championship Tournament will take place on ROH TV. The finals will take place at Death Before Dishonor on PPV on September 12, 2021 from Lakeland Florida. McKay also revealed that due to Angelina Love and Mandy Leon’s disregard for the rules, Maria Kanellis has officially put her (McKay) into the tournament via a fan vote. McKay said that she cannot thank the fans enough and she will try her best not to let them down. McKay then ran down the card for ROH TV this week. The main event will be Sumie Sakay vs Rok-C. Also on the show will be Mazzerati vs Nicole Savoy and lastly, the first match of the show will feature Miranda Alize vs Alex Gracia.

Before the match we got a very well produced video package highlighting both competitors of the match. This is always a great way to get fans invested in the match when they feature relatively unknown wrestlers.

It should also be noted that the commentators for the match were Ian Riccaboni, Lenny Leonard, and Chelsea Green. Chelsea Green stated that she is studying every woman in the tournament.

Its time for the Women’s Championship Tournament to kick off! The code of honor is adhered to by the women as the match started. Ian Riccaboni once again said that these women know each other very well and it was incredibly obvious as the women locked up into a quick stalemate. Alex Gracia controlled that match early on with some very nice technical wrestling and tie ups.  Gracia locked up Alize and delivered a very loud slap to her chest. Gracia drop kicked Alize to the outside of the ring. Gracia then went for a middle rope springboard plancha but Alize moved out of the way and Gracia hit the floor with a very loud thump. Alize has seized control of the match as she threw Gracia into the barricades a few times.

Back from commercial, both women were in the ring as Gracia and Alize were trading punches. Gracia with a Lou Thesz Press and she got a few good punches while on top of Alize. Gracia went to the top rope and did a forward somersault cutter but came up short on the pin as Alize kicked out at two. Gracia was slow to get back on the attack which gave Alize enough time to try to sneak a win in as she put Gracia in a small package, but it was only a two count. Alize with a high kick and cutter as she went to the corner and performed a Drive-by straight into the head of Gracia. This time it was enough for the three count as Alize has won her first round match.

We got another video package highlighting the women in the next match, Mazzerati and Nicole Savoy. Mazzerati said that she will build the new women’s division from the ground up. Nicole Savoy said that if she catches Mazzerati in her half nelson suplex then she will for sure win.

This match featured commentary from our regular team of Ian Riccaboni and Caprice Coleman with special guest Lenny Leonard.

The code of honour is adhered to but Mazzerati pulls Savoy close to her as she talked trash to her opponent. The women were in a pushing contest until Savoy put Mazzerati in a double wrist lock. The women then got themselves in a test of strength as both attempted a pin as they were locked up together.

Back from the break, Savoy had the control over Mazzerati as she had her whole arm locked up in a double wrist lock. The women went back and forth with their wrist locks. Nicole Savoy delivered a very nice European uppercut to regain control of the match. Savoy went for a half nelson suplex but Mazzerati was doing everything in her power to get Savoy off her back. Mazzerati dropped to her back on the ropes while Savoy was still holding her in the half nelson position, so Savoy got the worst of the drop as her neck and head bounced off the ropes.

Savoy delivered a beautiful butterfly suplex to Mazzerati and went for the cover but Mazzerati got up at two. Mazzerati then put Savoy in a northern lights suplex for a two count. Mazzerati is now arguing with he official which gave Savoy enough time to recompose herself and do an F5 on Mazzerati, but once again the count was only a two. Mazzerati went for a roundhouse kick but Savoy moved out of the way and was finally able to lock Mazzerati in the half nelson position and delivered the suplex. As Nicole Savoy predicted, this was indeed the end of the match as she got the ever elusive three count to move onto the next round of the tournament.

After the match Nicole Savoy celebrated in the ring as the bracket was updated to show Savoy moving to the next round.

Just like the previous two matches we got a video package highlighting the women in the main event. First up was Rok-C. She calls herself the prodigy as she is only nineteen years old. Sumie Sakay said that as the previous women’s champion she wants to win the title again.

The code of honor is indeed adhered to by both women as there seems to be mutual respect among the competitors. Sakay mounted Rok-C early in the match for a two count. Rok-C drove her knees onto the chest of Sakay after a nice backflip but was only able to get a two count. Rok-C got Sakay in the corner and ran straight to her and delivered a hurricane uppercut. With Sakay now on the ground Rok-C once again ran to the corner but this time performed a Meteora on the fallen Sakay. Once again though, Rok-C was only able to get a two count as we went to commercial.

Back from the break, Sakay gained control over Rok-C as she put her in a half Boston Crab submission. Rok-C was able to grab the bottom rope to force the break of the hold. After some more action, Sakay had clear control over Rok-C as she is attempted to put Rok-C in a cloverleaf submission hold. Rok-C fought her way out of the hold but Sakay then put Rok-C in a high angled Boston Crab. Rok-C was screaming in pain as she tried to fight and claw her way to the bottom rope. Rok-C was again able to grab the bottom rope to break the hold.

Rok-C climbed to the Bret Hart rope (Second Rope) and landed a Lou Thesz Press from it. Rok-C has now gained control of the match as she did a side Russian leg sweep for a VERY close two count. Sumi Sakay had Rok-C on the corner as she began climbing the ropes but Rok-C goes under Sakay and was looking for a powerbomb but Sakay kneed Rok-C in the face. Rok-C landed two very stiff kicks, climbs to the top rope and did a hurricanrana into a pin but Sakay reversed the pin for two very close calls.

Sakay and Rok-C were trying to each find a sneaky win by attempting to go for small packages but Rok-C then went for a kick that Sakay caught but Rok-C was able to roll through and put Sakay in a pin of her own. There we have it, the first major upset of the Women’s Championship Tournament as Rok-C was able to get the three count for the win.

After the match, Rok-C was visibly shocked and happy as Sakay is stunned. Both women stand on opposite ends of the ring as the bracket updates itself with Rok-C moving into the quarter finals. The women embrace in a hug as we get a preview to next week’s matches.

Bandido and Horus vs VLNCE United

This week’s TV which featured the ROH Women’s Championship Tournament was fun. While there were some sloppy moments, I think that they put the right matches on this week’s show that had three women’s matches. The video packages highlighting and showcasing the competitors was a great touch and kudos to ROH trying to educate us on who the women were before their matches. While I fully expected an upset somewhere in the tournament, I was still shocked to see the previous women’s tournament winner Sumi Sakay be the first victim of the upset. Rok-C is indeed a prodigy and I look forward to seeing more of her in ROH and beyond. Until next time, Stay Safe!