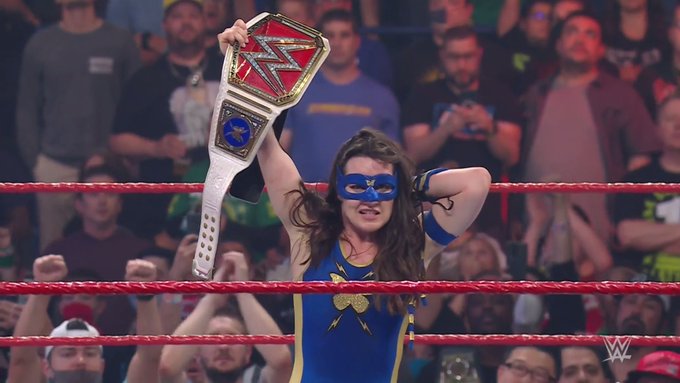 When you haven’t watched Raw for a while, it can be a little bewildering. That can be a good or bad thing, though, and when Dale Plummer asked me to cover tonight (in a swap as he covered AEW Dynamite last week), I psyched myself up for tonight’s show from Chicago. As an aside, my son and I literally stayed right next door to the Allstate Arena while attending the National Sports Collectors Convention last week. In any case, yes, I’ve heard that Raw has not been great as of late, but I’m going into this one with an open mind. Let’s get it started, live on USA.

The announce team puts over the idea that it’s back to basics and back to domination for the All Mighty (I still hate typing that as two words) WWE Champion, Bobby Lashley. No distractions … well, unless you count MVP as one of those. MVP says the champ has not dignified Goldberg’s challenge with a response before doing his best to build up Goldberg as a threat to anyone except Lashley. He goes on to say he’s trying to stop a tragedy from unfolding before the “Goldberg” chants ring out. Does Bill want to be remembered as a champion or a casualty? Goldberg comes out to address things himself, launching into an extended promo about gladiators and insinuating that Lashley is scared without offering much in the way of evidence. Yes, it ends with Goldberg telling Lashley he is next. Both Lashley and MVP decide to do some trash talking to Goldberg’s son, who is in the first row of the crowd near the ramp, which turns out to be a tactical error for MVP when he ends up on the business end of a Spear.

Do you think Corey Graves ever gets incredulous about what he has to say? For instance, saying with a straight face that he can’t see how any one man can defeat two men, like that has never happened in the history of handicap matches. You might be surprised to hear that Veer and Shanky aren’t all that interested in winning this one anyway, just softening McIntyre up for a chair attack from Mahal. Payback time, one supposes. Or maybe not, since McIntyre grabs his sword to fend off his foes. Shanky, don’t be a hero! He eventually joins the rest of his group on the stage, deciding against testing the blade. Probably wise.

Mahal tells the backstage announcer on his way out that he is outraged about McIntyre swinging his sword at him. McIntyre stops and tells the same announcer that Mahal can choose between the hospital, the graveyard or Angela. And yes, Angela could help him send Jinder to either of the first two. In-between those interviews, Nia Jax says none of what just happened can compare to what she’s about to do to Rhea Ripley.

What will Ripley do when confronted with an even more powerful foe? That’s the question to be answered here in a nutshell. She doesn’t handle it well in the early going, but she survives and even shrugs off Baszler’s attempt to lend a hand with a distraction to roll up Jax for a three count. The heels argue after the match, and after Baszler storms off, Ripley returns to the ring to hit Jax with the Riptide.

Mace and T-Bar vs. Mansoor and Mustafa Ali

We’re still doing Mace and T-Bar, eh? OK. Maybe I shouldn’t mock them considering they get the victory here, continuing the story about Ali being unsure about teaming with Mansoor. Also, Ali gets double teamed after the match, seeming to accept his fate the same way I imagine Dale does having to report on this show every week in its current state.

Winners: Mace and T-Bar by pinfall

Charlotte Flair is talking about Simone Biles and I’m sure nothing could go wrong here. She addresses the chants for Becky Lynch by reminding everyone she’s the one who sold out this arena, not Becky. Flair maintains that Nikki A.S.H. stole the title from her, and that she is going to have her own nervous breakdown about it. Not sure that’s what Biles had, technically, but on we go. She’s also upset that people have cashed in the Money in the Bank contract on her three times, which kind of only reinforces that as a smart thing to do. Apparently feeling this promo has gone on too long, Nikki sneaks in and wallops the Queen with a chair shot to the back. That does indeed end the segment, so good jorb.

Having not seen Raw regularly in quite some time, a lot of questions are blossoming in my mind as this show rolls on. For example, Doudrop? Why did someone think that was a good ring name? Eva Marie complains about Lilly before heading to the ring.

I’m not certain why Eva Marie was brought back while WWE was in the process of releasing Bray Wyatt (who got some chants from the fans tonight), but smart people make these decisions for the sake of the company. The narrative here is similar to the Ripley-Jax match in the sense that the announcers put over Tamina having to deal with someone stronger than her. Just like Ripley, Tamina prevails, and then Alexa Bliss and Lilly show up on the big screen to gloat.

Riddle and Damian Priest seem to be getting along swimmingly, which is great to see. Priest is set to be a guest on Miz TV momentarily, and isn’t concerned about anything John Morrison and Miz might be planning. Alas, since Miz blames Priest for putting him in a wheelchair, this is bound to be a pretty antagonistic appearance. Even though Morrison’s water puns make me laugh out loud more than once, all they do is piss off Priest, who chucks Johnny Drip Drip out of the ring and uses a Drip Stick on the Miz.

“You don’t know what it’s like to live that moist life,” is a line Graves actually says during this match, making me double down on what I said about him earlier. I think I just feel sorry for him. Morrison and Priest are fun to watch wrestle, at least, and Priest is able to prevail. A mask-wearing Sheamus attacks after the bell, but Ricochet comes to Priest’s aid and clears the ring of heels.

Damian Priest and Ricochet vs. Sheamus and John Morrison

It’s double duty for Priest and Morrison and a chance to make more water jokes, for better or worse. They’re better when Morrison makes them than the announcers, in my humble opinion. Meanwhile, I can’t decide who Sheamus looks like now with his short hair and mask, but it’s not Sheamus. Despite some mild hijinks, the good guys triumph in this one.

Riddle jumps on Omos’ back before the bell even rings, which isn’t a bad idea. It matters not, because despite some smart hit and run tactics, Riddle eventually falls to the big man.

Alexa is in the midst of running down a list of people that Lilly has influenced over the years when she gets jumped by Doudrop. Eva taunts her and Lilly and walks off, missing the chance to see Lilly rise on her own and laugh. Book the doll for SummerSlam now, please.

The announcers remind us that these men have done battle in NXT, while also suggesting that a third straight loss for Lee could be disastrous for Lee’s confidence. All I can think of is how less over both competitors are than they were in NXT. But the fans still like them, and it’s certainly not too late to get Lee back on track or have Kross carry his momentum over to the main roster. Lee is able to power out of a submission hold and hoist Kross up for a big powerbomb to pin Kross and get a much needed victory and a nice pop from the Chicago fans. Good for him, still not great for Kross to be taking L’s on the big show.

Asked if she’s going to be keeping an eye on her SummerSlam opponents in tonight’s main event, Ripley says she will be, and is rooting for Nikki. But regardless of the outcome, it won’t stop her from beating both of them and getting her former title back.

Tozawa may be able to summon ninja power, but Reggie is unleashing his full arsenal of high flying moves now that he no longer has to pretend to be a French sommelier. He dispenses of his challenger in just a few minutes.

Not knowing what to expect in a No Holds Barred match is daunting, but Nikki A.S.H. believes in herself and thinks she can beat Charlotte. If you have the same kind of self-belief, you too can be almost a super hero.

An incensed Flair lays an early beating on Nikki and quickly clears the announce table, spurring the fans to let her know that they want tables. They’ll have to wait a bit for that, though they do get to see Charlotte send the champ through the barricade with a vicious spear. Ripley almost looks giddy watching both women lay into each other on the backstage monitor before the crowd finally gets what it wants: Flair powerbombing A.S.H. through the announce table. The Queen confidently drags Nikki into the ring and covers by standing with one foot on her chest, but the champ kicks out. After watching Nikki rise in disbelief, Charlotte tries to spear her through a table in the corner but sees her move and crashes through the wood instead. Nikki covers but can only get a two count. Undeterred, A.S.H. lifts Flair’s feet onto the middle rope and rolls the dice on her, covering to get the three count.

She did it! And I did it, making it through three hours of Raw. I feel like Dale owes me an hour of my life back, but we’ll settle that sometime before you see him back here recapping next week’s show. See you in seven (or two, if you join me for Dynamite this week)!

Lots of this show was a slog, but it did have its moments. Keith Lee winning was nice, but only if WWE has something in mind for him to follow up. The main event was good and let me bump the whole grade up by half a star. But so, so much else just feels like filler, or in some cases (ahem, Eva Marie and Doudrop) completely pointless. Raw needs some identity, something to hang its hat on to carry things from one bit to the next. Hopefully it finds it before the next time I fill in on a Monday.