NWA POWERRR: Round One of Champions Series has pins & points 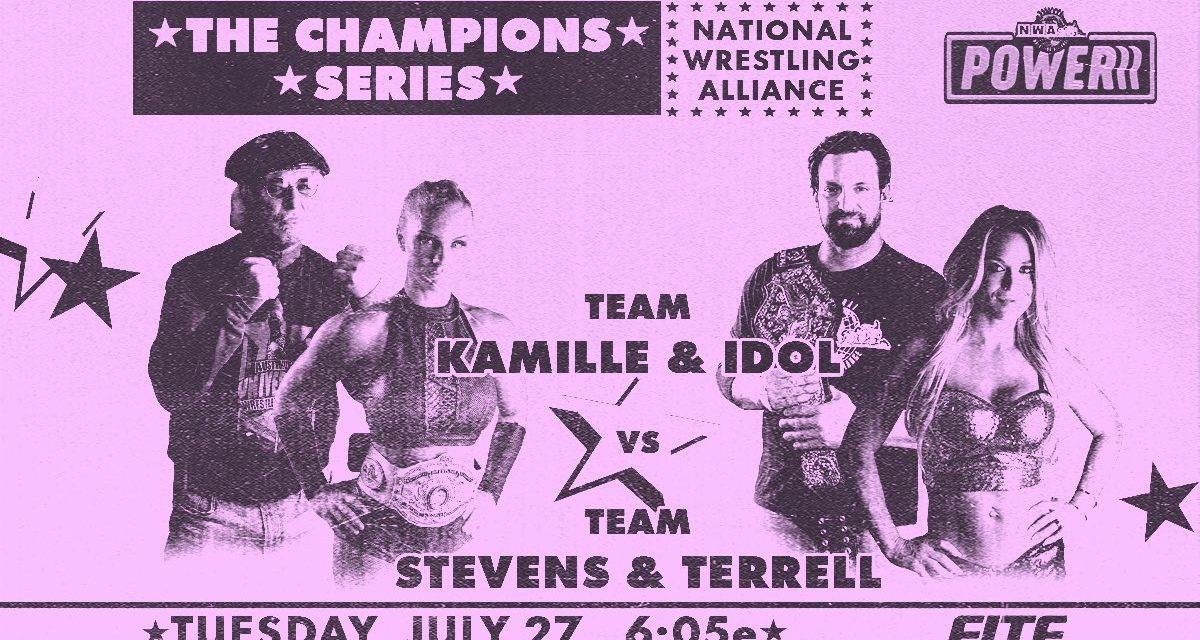 The Champion Series is officially begun at NWA POWERRR, and that means all the competitors have stepped Into The Fire.  Last week was a Draft Day, and if you missed it, here it is in its entirety:

We now have some more information on how the Series will be scored, so here are…

Should a bracket end in a deadlock, the NWA governing body will award a round one tie break to whichever team should win their contests in the shortest time.  The first round has a lot of importance going into the matches.  So let’s get the show started right now.

From the GPB Studios, in Atlanta, GA.  Joe Galli and Tim Storm have the call. Velvet Sky, Galli mentions, is on assignment (since she’s part of Team Pope/Sky).  For now, let get going to Bracket A for your First Match of the night… 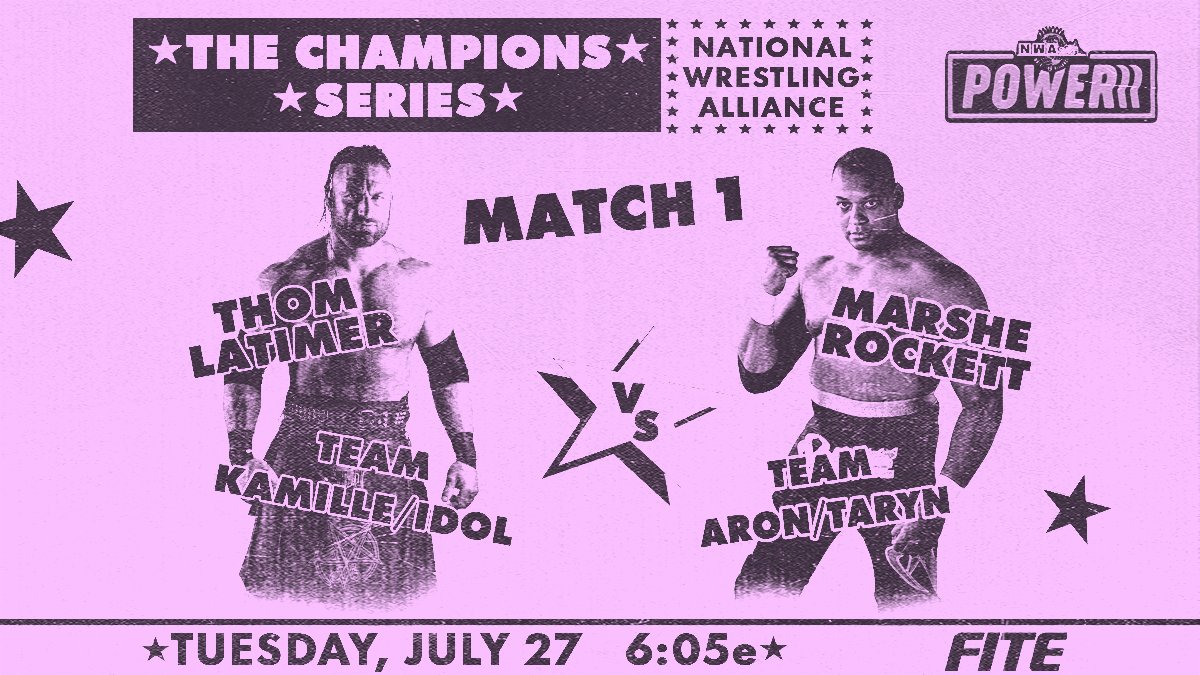 Early into the match, Rockett gets advantage over the King of Evil, but Latimer gets aggressive as well.  Rockett is stepping up his game, at one point sending Latimer to the outside, while his teammate Tyrus at ringside is wondering where his head is in the match.  The move of the night, has Latimer flip back into the ring using the ropes, and getting a wicked spear to “All Day” Marshe Rockett.  Latimer covers for a count of two.  Now firmly in control, Latimer delivers a spinning neckbreaker for another two count, and a belly to back suplex for another two count.  Latimer keeps up the offense and wears down Rockett, and he follows by swinging Rockett ropes to a body slam for another two count.  Latimer goes up top and comes down for an axe handle, but gets caught in a super kick, and Rockett follows up with a power slam for a count of two.  Rocket gets Latimer in a fireman’s carry, but Latimer takes down his elbow pad and rakes the eyes of Rockett to break the hold.  Latimer hits a stunner/Ace Crusher and gets the pin and the Points in Bracket A.

Velvet Sky joins at the commentator’s desk, talking about her pick in Jennacide and what she brings to the table, so on to the next match in Bracket B… 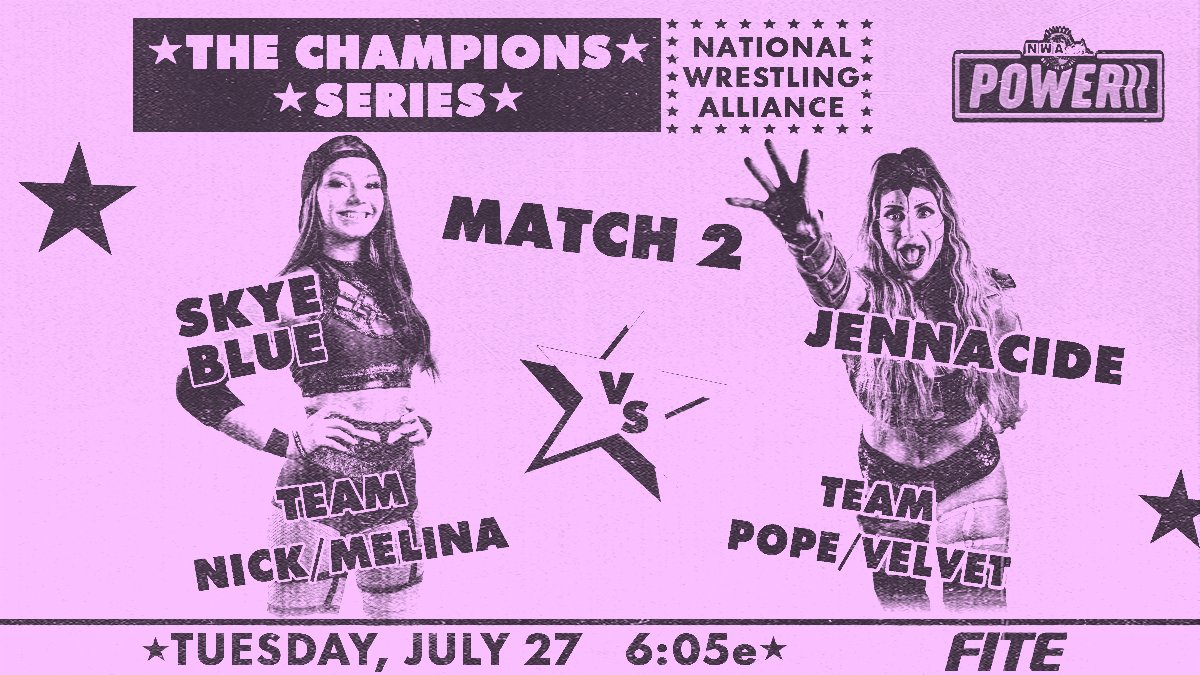 Yeah, this match is all Jennacide, as she overpowers the spunky Skye Blue.  She slams Blue to mat, but can’t keep her down.  Blue comes back, sending Jennacide to the corner and she hits ah handspring elbow.  Blue then tries a leg lariat to the corner, but no dice, as Jennacide manhandles…errr, woman-handles Blue, driving her knees to Blue’s midsection.  Jennacide gets Blue in a front suplex and covers for a two count.  Jennacide goes for an armbar to Blue in a Camel Clutch-style submission, but Blue uses her leg to get to the ropes to break the hold.  Blue makes a comeback, and gets Jennacide draped on the middle rope, and Blue follows with a drop kick to the back and covers for a count of two.  Blue then tries a sunset flip, but…yeah, nice try.  Jennacide picks up Blue, but Blue still has some moves, and send Jennacide out in a huracanrana.  Blue goes up top the turnbuckle and gets a cross body to pin, but it’s for a two count.  Blue goes to the well once too often at the top rope, and gets caught by Jennacide in a powerbomb for the pin and the points for a bracket B.

Now, its Aron Stevens joining at commentary.  Galli asks about the team dynamic, and Aron replies, “It’s Aron and Taryn, and we’re sharing. It’s the same team, and the same dream.”   It’s like he’s a poet, for those that don’t know it.  He must be really good at coming up with a rhyme.  Yes, I’d say he does it all the time.  You’re welcome. 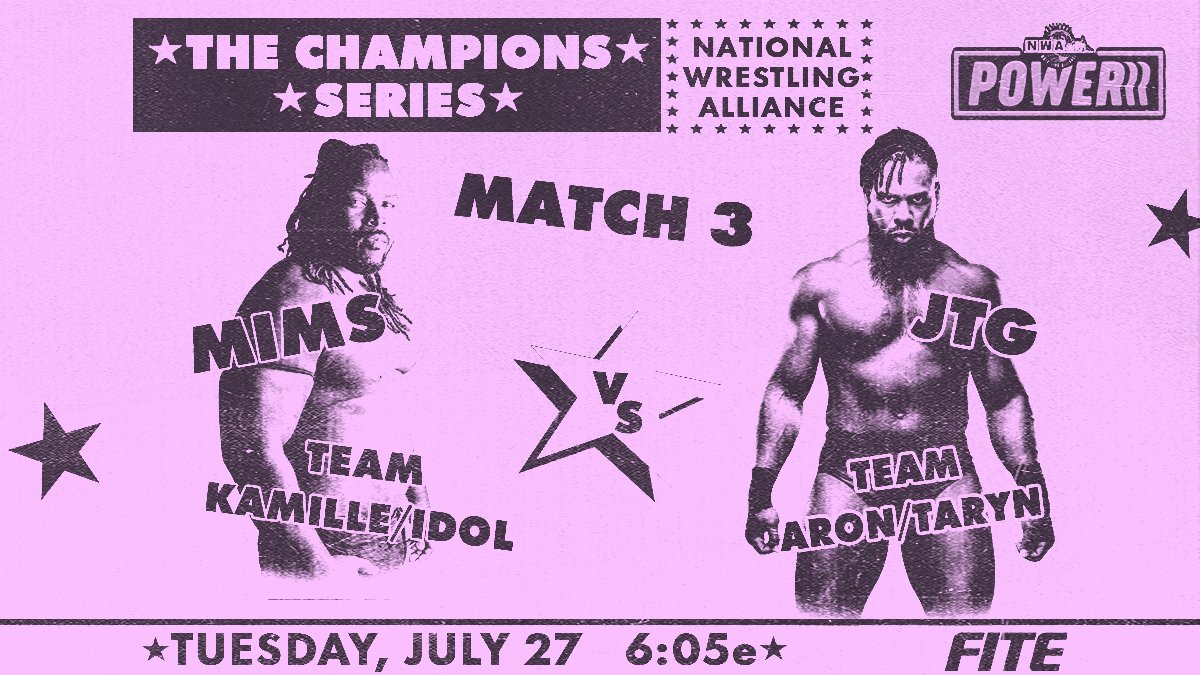 This is billed as a Prodigy versus Pedigree match, and he ain’t joking.  Start of the match has an aggressive collar and elbow by the combatants, and neither is giving an inch.  They lock up again, and JTG shows his veteran moves, overtaking Mims.  JTG shoots Mims to the ropes and hits a beautiful standing drop kick (eat your heart out, Bob Holly).  But Mims is stepping up a gear, getting Tha God with a crucifix takedown for a two count.  JTG responds with a clothesline that rocks Mims. JTG cover for a count of two.  JTG gets MIMS in full mount and hammers away at his face, and then hammers at the arm joint.  JTG then picks up Mims by the hands, and hits a spine buster that rocks the ring.  JTG covers, but only for a two count.

JTG is getting frustrated, and takes Mims on the middle ropes and starts to choke him out.  He slaps him back to the mat, and then JTG climbs the top turnbuckle and connects with flying elbow to the back of Mims head.  He follows up with a sling blade neckbreaker for another two count.  JTG goes for an Irish whip, but it’s reversed by Mims and he sends JTG to the corner with shoulder tackles, and hits an impressive one-armed uranage.  Mims goes up top and his what Storm called “a Nestea Plunge”, but JTG moved out of the way, and Mims missed the mark by *THAT* much.  JTG goes for the Brooklyn’s Edge finisher, but Mims wiggles out. JTG gives Mims a look that says, “Nah, man!”, and sets him up top to land the Brooklyn’s Edge.

Your Winner via Pinfall:  JTG; Five points for Team Pope/Sky in Bracket A

“The National Treasure” Nick Aldis now joins commentary and says, “Even a Michelin star chef has to have great ingredients”, and he’s going to work with what he has. Classic.

Now it’s time for the Main Event in Bracket B 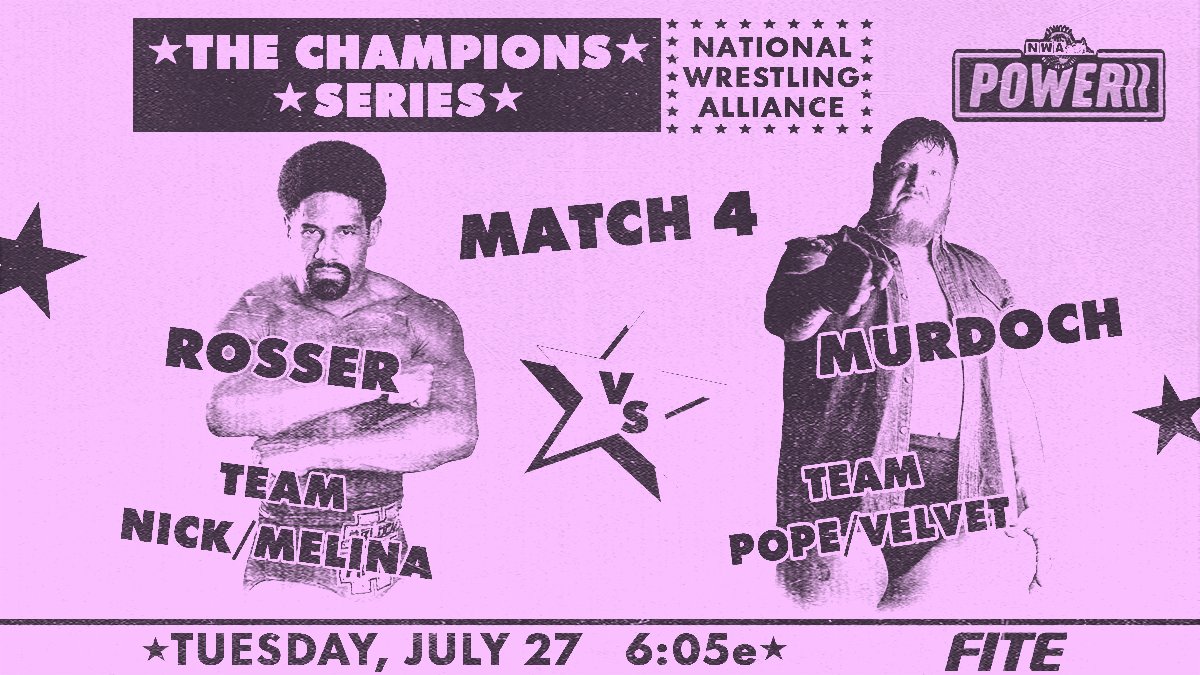 Beginning of the match has some serious jaw jacking with Murdoch in Aldis’ direction, and Rosser throws his shirt at Murdoch to get his attention.  Hmm, my Smart Mark Sense is tingling, and I sense a heel turn.

In any case, the bell rings and Murdoch pushes Rosser to the corner.  Rosser gets in Murdoch’s face, and Murdoch slaps the taste out of his mouth.  Rosser shows his technical prowess with a nice headlock/cravat drive Murdoch to the mat.  He then whips Murdoch to the corner and starts with shoulder tackles.  But Murdoch reverses, and lays in chops to Rosser’s chest.  Murdoch keeps on the attack, and sends Rosser to the ropes.  Rosser leaps, and Murdoch gets in a nice spine buster for a two count.  That don’t work for Mr. “No Days Off”, and Rosser fights back and gives Murdoch a beat down in Prime Time, if you will.  Rosser takes it to Murdoch to the outside of the ring apron, and tries to suplex the big man, but gets blocked by Murdoch. Murdoch strikes at Rosser’s head, and clotheslines Rosser, sending him up and over the ropes to the mat. Murdoch goes up top and gets his flying bulldog finisher, but doesn’t cover.  He gets Rosser in a submission that I can describe as like a Rings of Saturn/STF combo, and Rosser has no choice but to submit.

Aldis is not pleased with how his team is doing in Round One, and takes off the headset and walks away.  As of this writing, it’s Team Pope/Velvet Sky in the lead for a total of ten points.  Team Aron/Taryn and Team Kamille/Austin Idol split with five points each, and Team Nick Aldis/Melina get a big goose egg with a zero.

Next week is the conclusion of Round One of the Champions Series as the show goes to credits.

Full disclousre:  I’m a sucker ffor tournament matches like this, and the first part of Round One of the Champion Series scratches my itch.  Not a bad match of the entire bunch, and lots of fun seeing how the point system will swing.  My prediction on Aldis/Melina going all the way looks less like it’ll happen, but hey!  It’s still early.

JTG/Mims delivered a great match tonight, and I’ll say it again:  If you’re sleeping on JTG, time to wake up and see that Tha God is Good!